Three in one, or Why only the West can be the instigator of nuclear Armageddon

April 26 2018
11
No one on our planet, except the Western geopolitical cluster, has the necessary potential, level of synergetic motivation and experience in provoking global military cataclysms. 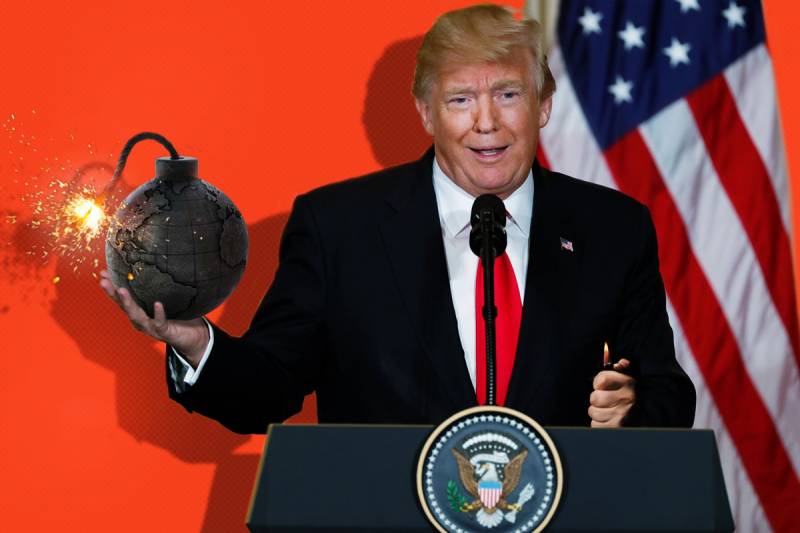 In order to start the third world war in modern conditions, we need at least three circumstances.

The first is the presence of a hopeless situation, at least for one side of a potential collision, which leaves no other possibilities for it to satisfactorily solve the urgent problems of the existential level.

The second is the availability of sufficient material, demographic, and psychophysical resources for planning, successfully conducting, and victoriously ending such a war.

The third is the presence of casus belli, a pretext for war. That is such an event that would make it impossible for any other development of events, except for the military.

Next, you should determine the potential initiators of this global collision. Obviously, only one of the existing centers of power - the aggregate West, China and Russia - can be such. All the rest to unleash a world war is physically unable to due to the lack of certain necessary resources.

China. This power, although it achieved world leadership in a number of significant economic indicators, is still not a sufficiently powerful, mainly regional, power in a military-strategic sense. In addition, the PRC, on the one hand, fits perfectly into the Western global economy as the main consumer goods factory, and on the other hand, it successfully cooperates with the Russian Federation in the commodity sector. Therefore, China has no substantial reasons for bringing its relations with them to the level of antagonistic contradictions, which are not resolved otherwise than by a major war.

Russia. A country with a half-cut potential after the collapse of the USSR continues to experience significant internal and international problems. The completely lost system of international alliances, the army that needs to be created practically anew in conditions of a acquisitive market economy, not relenting crisis phenomena in the post-Soviet spaces - all this together seriously aggravates the country's position and deprives it of sufficient opportunities for successful geopolitical maneuver and even more so for total confrontation other global centers of power. Russia is able to destroy any of its geopolitical counterparts in the “end battle”. However, her motivations for such a choice are clearly insufficient. The country has a great potential for internal self-development and a huge margin of safety, determined by the capabilities of its territory, the earth's bowels and the nature of the gifted people. Which drastically reduces the motivation for any radical, one-time and risky actions.

Aggregate West. This geopolitical grouping has in total the most powerful arsenal on the planet for using force to resolve any issues of interest to it. That in itself is a powerful incentive for choosing as the best precisely the military-political methods of achieving goals. Economic-production and scientific-technological resources allow the West, especially in the case of military mobilization, to significantly exceed the capabilities of any other geopolitical cluster.

The threat of catastrophic damage as a result of the enemy’s retaliatory strike certainly has a certain deterrent effect on the West’s readiness to use its numerical military superiority. But this influence can be considered decisive by no means always. In itself, the West’s understanding of the nature of “unacceptable losses” may have significant features. In particular, due to the rapid development in the West of supranational and non-state centers of financial and economic power, the traditional perception of security problems and the very concept of “acceptable losses” may undergo significant changes. To the extent that even the loss of entire states can be considered a new transnational world elite as a completely tolerable loss, or even a deliverance from ballast.

In general, the overall level of motivation of the West to a global military confrontation is an indeterminate value, since it is a result of so many significant factors, the situation with a whole range of which remains permanently unclarified. The extreme volatility of the western financial and economic model, its dependence on a practically infinite number of heterogeneous risks make it impossible to advance in advance the position in which the decision to move to a global military confrontation becomes irreversible. At the same time, the West, relying on its enormous potential for mobilization deployment, will not rush into proactive and alarming signals in this area.

Thus, the measure of readiness of the aggregate West to initiate a third world war can be assessed as uncertain and at the same time quite high, since the corresponding situational puzzle can be formed there in almost any forthcoming period of time.

This will be facilitated by the general inclination of the West to military-force decisions, inherent in its cultural and historical code. We should not forget that for many centuries, since the times of ancient Greece and Rome, Western civilization has acted as the main global aggressor, military conqueror and conqueror of entire continents. Moreover, the inertia of success that accompanied this expansion could not but affect its general perception of the surrounding world as a space created for its endless safaris. He actually does this free hunting right before our eyes.

As for the immediate reason for the transition of the military Rubicon, everything is simple. The one who has the greatest experience in organizing global military expansion is, by definition, best able to create the most appropriate conditions for them. Because this is exactly what comes from experience.

And since the main geopolitical counterparts of the West are now clearly not eager to give him substantial reasons for military reprisals against them, this particular experience can be very useful. It is about creating artificial, staged situations that can be a substitute for the real casus belli missing for the war.

There are no particular problems with this, since the West as a whole and the USA in particular, has historically been quite successful in organizing large-scale military provocations. Only in the twentieth century, they became many times the reason for US military intervention at a convenient time for them.

Here you can recall the mysterious sinking of the American battleship "Maine" in the bay of Havana, which became the prologue to the Spanish-American war, and the equally strange sinking of the British superliner "Luzitania" in 1915, as if specially timed to coincide with the US entry into World War One. In the same row and mysterious история with the bombing of Pearl Harbor on 1941, allegedly taking America by surprise. Despite the fact that this "suddenness" somehow did not prevent the American command from removing all the newest aircraft carriers from the doomed harbor, leaving only unpromising battleships there as ritual victims. Which, which is typical, according to the military regulations of the time, were to go to sea together with aircraft carriers to protect them, but for some reason remained on the joke. But soon, US President Roosevelt received the opportunity with the full moral right to declare a uniform "ghazavat" to the villain of Japan.

Then there was a lot more. And the Tonkin incident, which gave the United States a “legitimate” reason to begin the massive bombing of the Democratic Republic of Vietnam, and at the same time the whole of Indochina. There were also quite mythical "atrocities of the Yugoslav army in Kosovo", the corpses for which were provided by the American special forces and the American bombing. This gave “legitimate reasons” for NATO’s military invasion of this land and its rejection from the Federal Republic of Yugoslavia. There were truly miraculous in their arrogance American test tubes God knows what, after which America, without hesitation, accused Iraq of all mortal sins and attacked him like a thug in a dark alley.

There is viewas the current naval armada, led by the aircraft carrier Harry Truman, is heading for the Mediterranean with similar objectives:

“If people pushing Trump can get him to strike a new blow to Syria, we should expect a new attack under a foreign flag. And if the massive increase in NATO firepower means that enough missiles reach enough targets to kill the Russians, then Putin really will have no choice but to sink the American fleet.
Putin will have no choice, because, whatever the danger of a retaliatory strike, the inability to respond will signal a Russian defeat and retreat in Syria. This, of course, will lead to a rapid escalation of military pressure against Syria and Iran. This means that when the empire (the United States) moves to a plan to strike at the territory of Russia, the most reliable allies of the Russian Federation will be out of the game, and its “soft underbelly” will be very vulnerable.

Thus, Putin will order the destruction of the American fleet, and after an hour everything that remains, the wreckage and crippled corpses in several oil spots, all this appears in the photo and in video clips to illustrate Trump's declaration of war because of "a mortal blow to Russia and an attack on the humanitarian convoy of the United States."

The only thing that seems unlikely to me in this scenario of the American edition of Sacker is Putin’s order to drown the US Navy squadron. But for professionals in this kind of affairs, which overseas has always been enough, these are mere trifles. Because they can do without Putin at all. Of course, technically it will be a bit more complicated. We will have to imitate a Russian rocket attack on an American aircraft carrier, or come up with a story with Russian submarine drones: "Well, you heard Putin himself told about them!" Why just blow up a powerful charge under his bottom Norfolk. I think that they have enough creativity for this. Enough of it in the case of the twin towers in New York. Collapsed right at the moment when the US rulers urgently needed a solid reason for the next round of global expansion.

So this is a matter of technology, which these guys who are obsessed with all kinds of gadgets have always been in abundance. As for the capabilities and desires of the aggregate West to arrange another global fire for humanity, then we state that it is the only planet on this planet who is capable of such a thing, at least theoretically, and is interested in it. There are simply no other candidates for the role of world Herostratus.

Ctrl Enter
Noticed oshЫbku Highlight text and press. Ctrl + Enter
We are
Situational analysis of the death of the MH17 flight (Malaysian Boeing 777), made on the basis of engineering analysis from 15.08.2014Strangulation: the context, conduct and consequences of the American naval blockade of China
Military Reviewin Yandex News
Military Reviewin Google News
11 comments
Information
Dear reader, to leave comments on the publication, you must sign in.