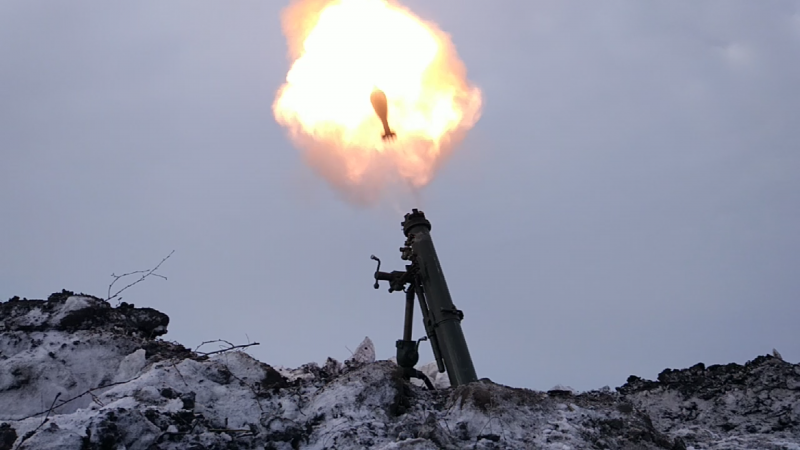 That's right, since it’s about how a person destroys his own kind. Yes, the record holder here is our AK-47, but it is not a matter of records at all. The point is efficiency and price / quality ratio.

Considering modern mortars, with all their diversity, you do not stop feeling a sense of deja vu. Mortars with a difference of half a century look like brothers. Only experts understand the nuances of the differences. Perhaps this is why the exhibitions of such weapons are not particularly popular.

Indeed, one- or two-legged carriage, pipe, plate and sight. What is there to look at? The stove is bigger, the stove is smaller. Carriage with or without wheels. Trumpet? From very small, funny, 3-5 cm diameter, to 12 cm and more. Why, unlike civil onlookers, army veterans, and those serving in the service today view these weapons with undisguised interest? 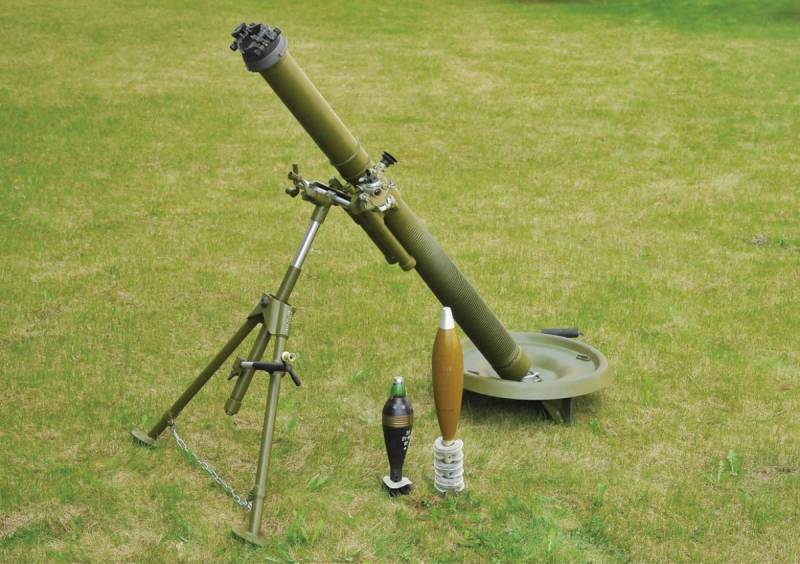 In the first part of a series of articles on mortars, we wrote about the invention of this weapons. Today we will talk about those samples that really surprised designers and military. Successful and not very. Parents of many descendants and disappeared without a special trace.

The father of most modern mortars can be called the Stokes mortar. It is the descendants of that "old man from the First World War" that visitors of various exhibitions and military exercises see today.

However, the mortar is much more known in the world, which became a direct continuation of Stokes' idea. Mortar, which in the postwar years developed the French firm "Brandt". This model was adopted in 1927 year. Upgraded to more powerful ammunition in the 1931 year. 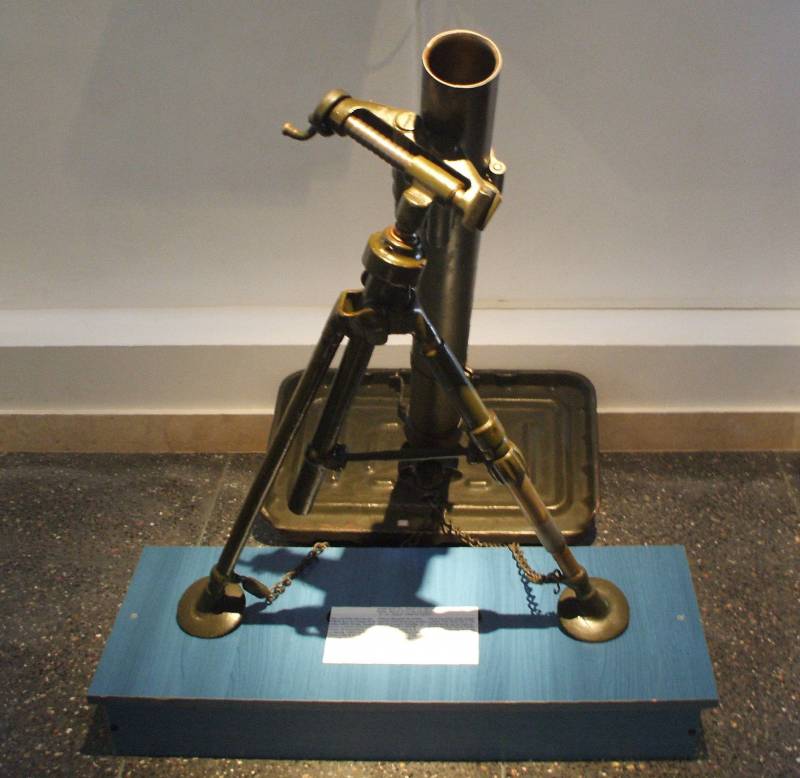 The Brandt specialists have changed the rather inconvenient feast of Stokes. The bipod of the French was almost perfect and provided a quick leveling tool. And the transfer of sight closer to the barrel provided a quick lead gun to battle.

In addition, "Brandt" paid much attention to ammunition. Now used mines, instead of grenades at Stokes, with mines of the widest range. From ordinary to smoke and high power. And those solutions that French specialists have found can still be seen in most mortars.

Of course, the Russian reader is particularly interested in Soviet mortar samples, which were used by our army during World War II. The interest is understandable only because today these samples are either forgotten or, it is not clear why, they are considered German.

In 30-s, Soviet designers developed quite successful samples of mortars. Even then, Soviet weapons were distinguished by unpretentiousness and durability. The reasons, I think, are clear. Weapons should be clear and easy to use. True, Soviet designs were somewhat heavier than Western ones.

Most of all questions and interest cause Soviet light mortars. Many can not believe that this is a real weapon, and not a partisan "homemade". Imagine an army shovel with a caliber cutting 37-mm. You install this shovel at an angle. Stalk on a special leg-support and everything. You have a 37-mm mortar! 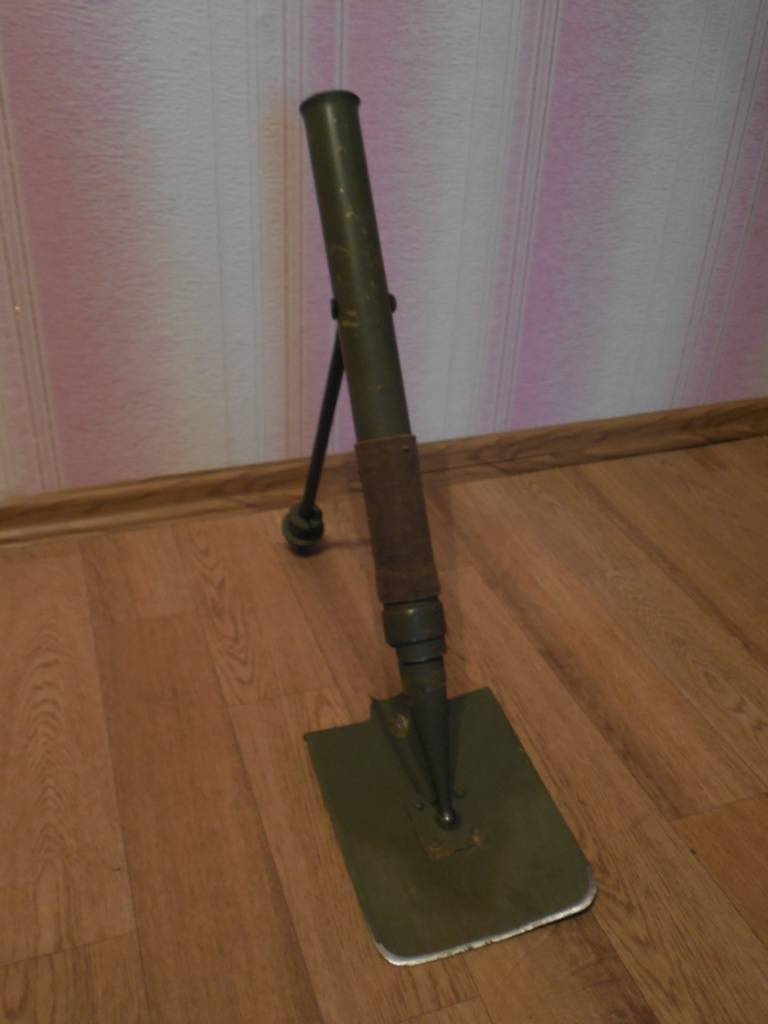 The German army in the initial period of the war captured quite a lot of such mortars. Therefore, this mortar is known more as a mortar-shovel "3,7-sm Spatengranatwerfer 161 (r)".

However, the 37 caliber mm didn’t satisfy the infantry enough. Therefore, for the level of a platoon-company, a larger, 50-mm caliber was chosen. However, the first two samples of such mortars (50-PM 38 and 50-mm PM 39), although they were put into service, proved to be difficult to manufacture and did not meet the requirements of the army. 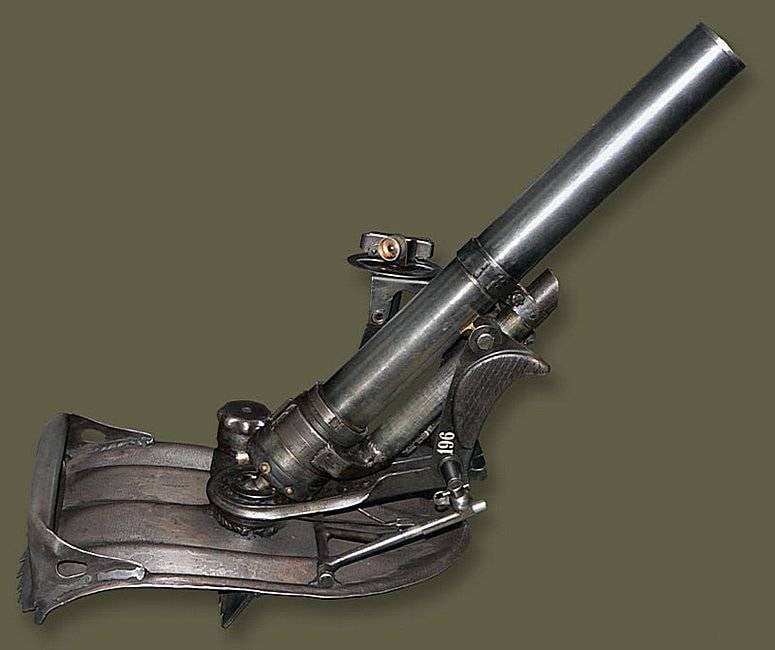 It is this mortar that is often used in the movies by German soldiers. Honestly, a completely obscure attitude towards Soviet weapons from modern directors. 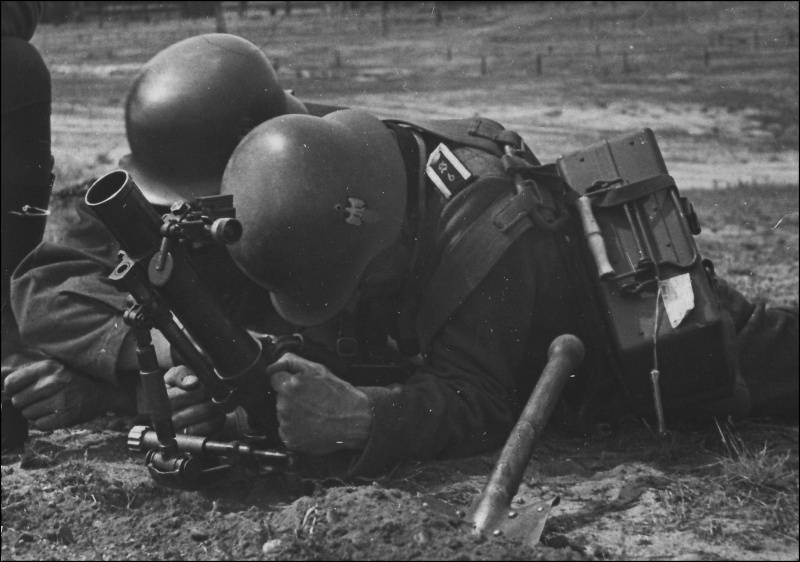 No, it was so, but basically the picture using a mortar was as follows: 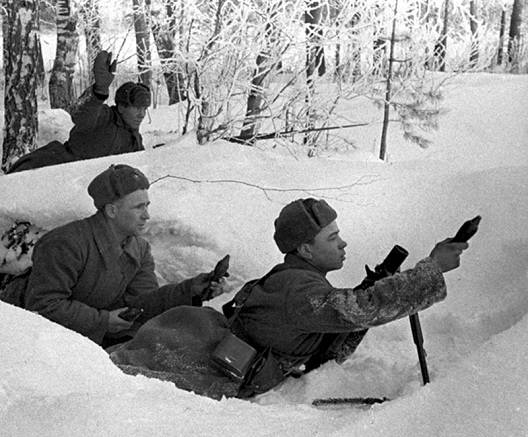 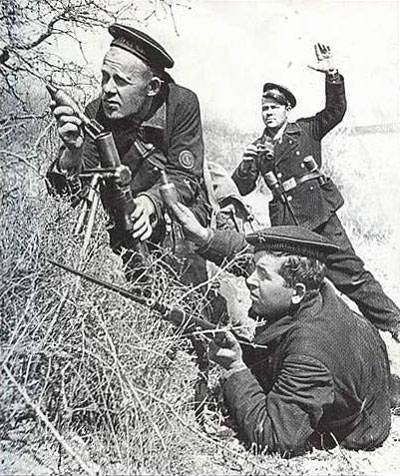 Of course, this mortar looks very advanced, and more characteristic of the German, "correct" army. But bad luck, he is absolutely ours!

This mortar was first tested in January 1940 on the Finnish front. Several samples of this weapon were delivered to the 85 th Infantry Regiment of the 100 th Infantry Division.

In principle, the mortar proved to be quite good. But he had significant drawbacks. When the swivel mechanism was in operation, the sight level was quickly lost. Yes, and mount the sight was not reliable.

The 82-mm battalion mortar of the model 1937, designed by Shavyrin, is much more famous. If you look at this mortar, then you will actually see where it all began: a Brandt mortar. It was he who became a model for Soviet designers. And these mortars appeared in our country after the conflict on the CER in 1929. 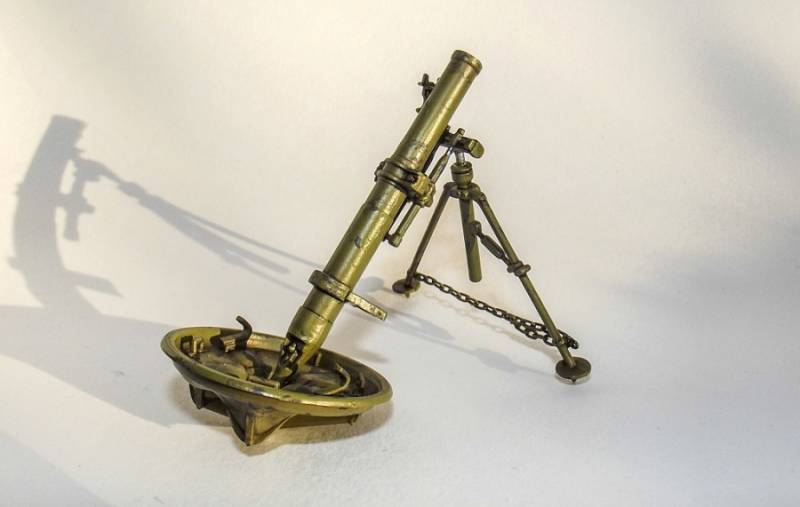 Often the question of caliber arises. Why are our calibers a little more western? The answer was given by Shavyrin himself. "In this case, we will be able to use the enemy’s mines, but our enemy is not." Although there are other opinions.

The 82-mm mortar so successfully entered the line of weapons, so perfectly matched the needs of the infantry that they use it even today. On the territory of Russia, recent cases have been observed in Chechnya. 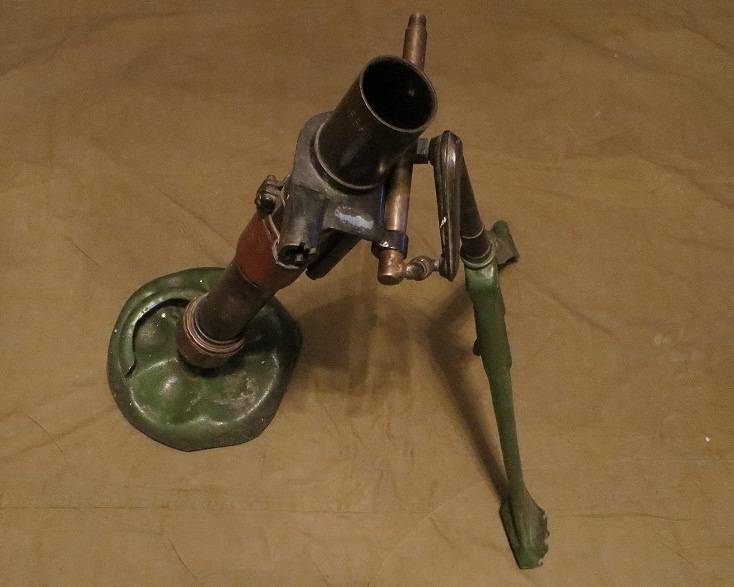 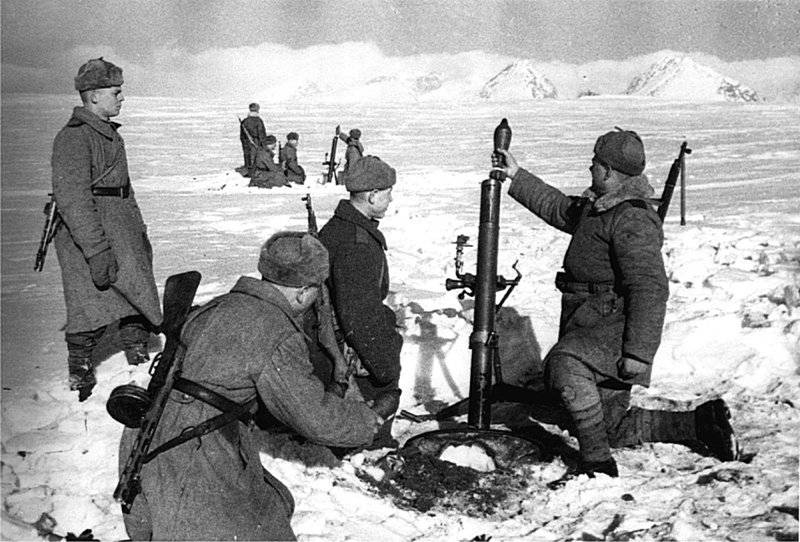 Another mortar to which you should pay attention - 107-mm mountain-pack regimental mortar sample 1938 year. The designer of this mortar was also Boris I. Shavyrin. That is why this mortar is an enlarged copy of an 82-mm mortar. A total of such mortars was released 2341 thing. 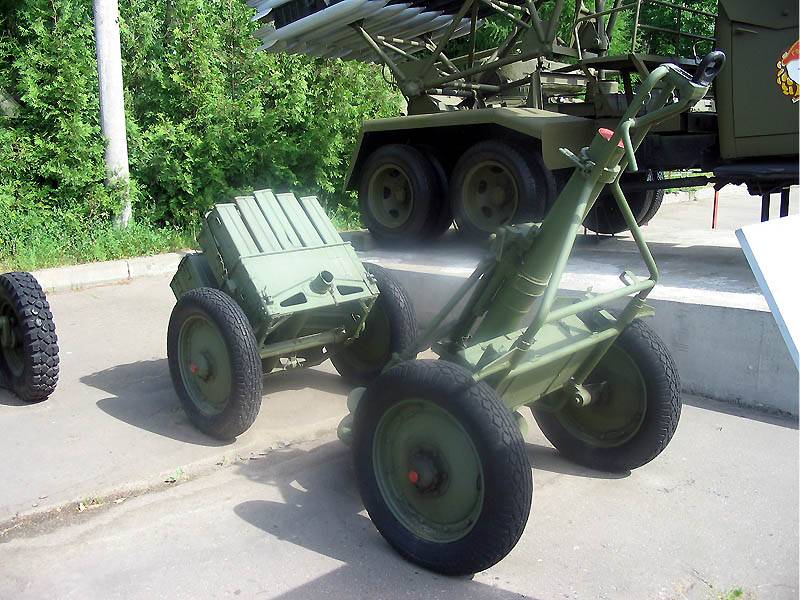 Despite the fact that the release of these mortars stopped already in 1941, the weapon was successfully used throughout the war and for a long time after. in mountain-rifle units and compounds, the possibilities of this design were evaluated. Especially the possibility of disassembling into several parts for transportation on horseback. 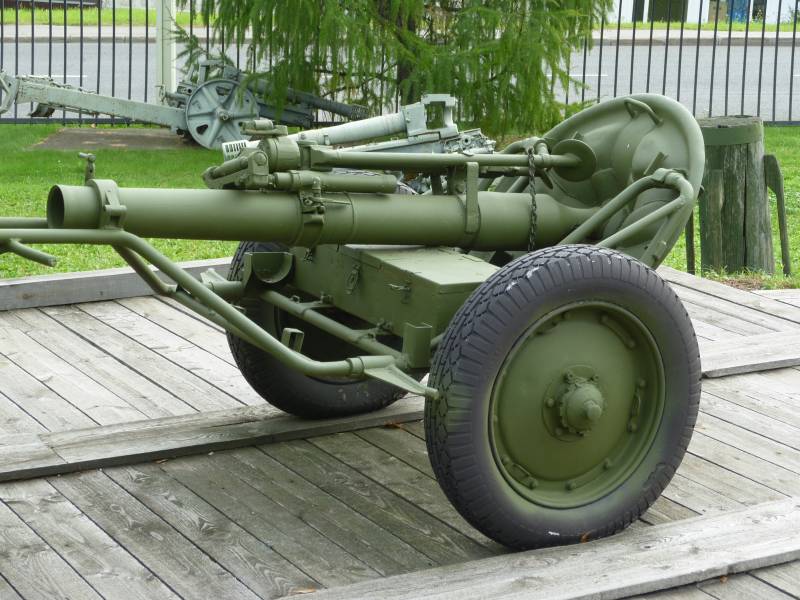 Well, a perfectly perfect Soviet model, the 120-mm regimental mortar model 1938 of the year. Designed by the same CB Shavyrina. Today, in many armies of the world, this particular mortar is the main one. But we will talk about it in more detail in the sequel.

What is the genius of this weapon? Alas, technically this mortar contains nothing revolutionary. But there is a nuance that is simply impossible to miss. Mortar has a wide base plate of a round shape. It seems to be nothing special about it. However, the wide and round base plate made it possible for the mortar to be calculated to quickly correct the instrument horizontally.

In the very name of the "regimental mortar" laid down the tasks that this weapon should perform. The mortar has become an analogue of conventional cannon artillery. Only much more efficient. He began to carry out fire support infantry.

In addition, the mortar was placed on the wheelbase and a special earring for transportation was fixed on the trunk. Moreover, the mortar could be transported by almost any equipment or even horses. Thus, the mortar is very "quick" to use. He is not only quickly brought into a combat position, but also (and this is more important) is quickly translated into a marching one. And this ensures the "disappearance" of the battery immediately after the end of the shooting.

In general, mortars can be written endlessly. But today we are considering only the most interesting samples. Agree to write about the German copy of our 120-mm mortar silly and not interesting. Just stating the fact that she was. And not the other way around.

But light mortars were quite interesting.

Consider the Italian mortar 45 / 5 model 35 "Brixia". An interesting weapon. The most complicated and, most importantly, it is not clear what was created for. Mortar caliber speaks for itself. It is difficult to create an effective ammunition of this caliber. And the length of the barrel (5 calibers, as can be seen from the notation) did not even provide the minimum range. 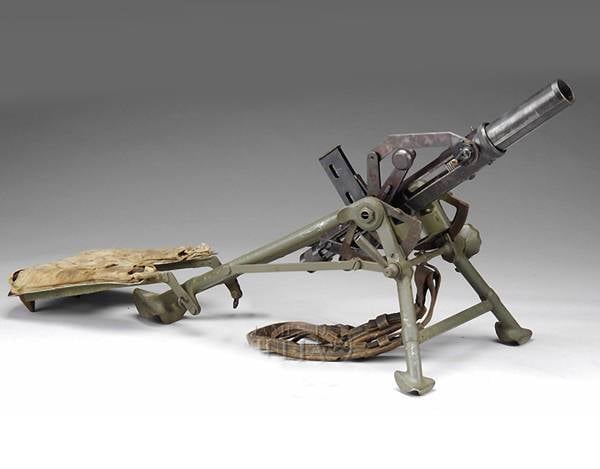 What cannot be taken away from the Italians is the love of comfort. The mortar has a special pillow that protects the back of the soldier when carrying the mortar, and in battle serves as a mortar ... a soft seat! 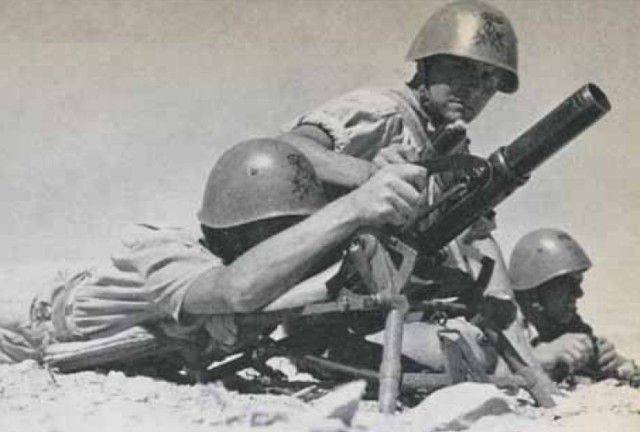 Charged "Briksia" from the breech. The shutter opened and closed with a special lever. Mina weighed 460 grams. There were mines in a special shop for 10 pieces. All mechanisms of turns and lifting were somewhat complicated. 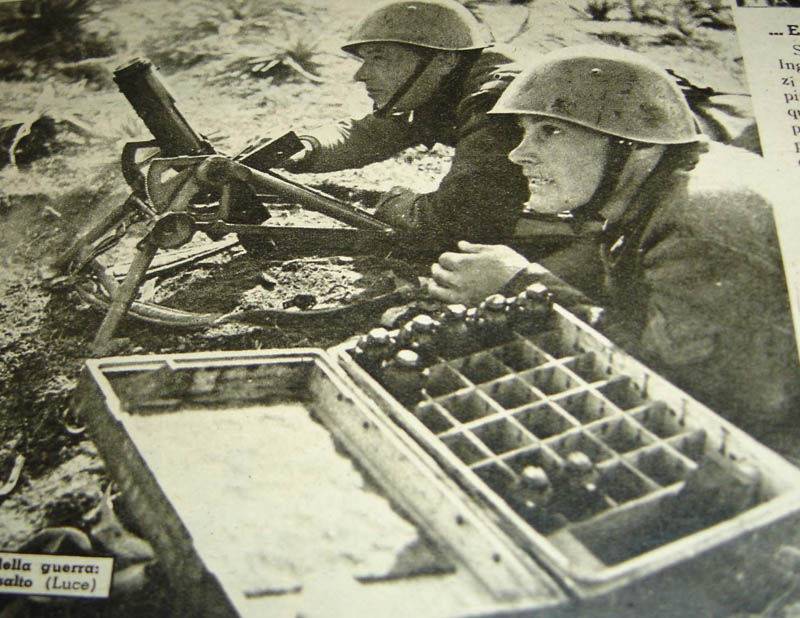 In short, in this weapon united design "bziki" to the fullest. However, weapons were used in the Italian army and even by the Germans of Rommel's corps in North Africa.


But not only Italians excelled in the production of light mortars. No less interesting are the Japanese. Japanese 50-mm mortars, probably, are still remembered in the United States by an unkind word. And not from the effectiveness of shooting, but for a completely different reason.

The Japanese developed the first light mortars back in the 1921 year. Without really going into the topic, he actually created what is used today in many armies of the world — a hand-held grenade launcher. It was called a "miracle" "type 10". A simple rifle with a gas regulator to increase or decrease the range. Mines were rather grenades with plumage. 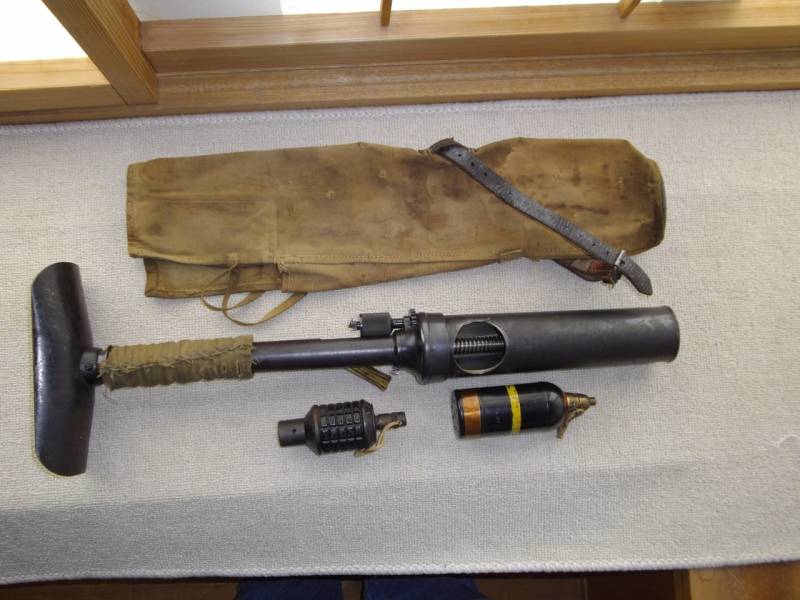 In 1941, the Japanese army entered the new mortar "type 89". Now Japanese mortars have acquired a more decent look. A rifled barrel and a new type of ammunition gave a decent range of fire (650 m). And the possibility of quick assembly and disassembly and the presence of a leather carrying bag helped the soldiers to quickly change positions during the battle. 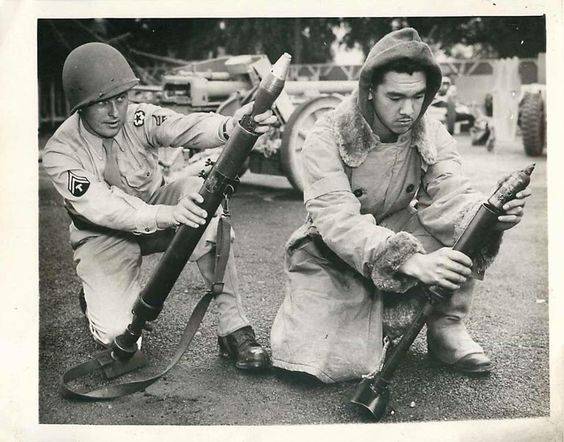 An interesting solution was found by the Japanese to adjust the range of the shot. Nobody has such a solution, at least from the known samples. The range of the mines was regulated ... by changing the length of the striker! The movable head has differently ignited the charge. The more the firing pin was advanced, the less was the distance of the mines' flight.

In general, the mortar "type 89" completely fulfilled the tasks. A simple weapon with a primitive sight in the form of scratches on the barrel. Of course, small-caliber mines could not cause significant harm to the enemy, but they acted quite soberingly. And the low weight and the ability of the soldier to carry a large number of mines increased the firepower of the squad.

No one could explain the strange name that was established in the American army for the captured "type 89" - "knee" mortar. But it was this name that caused many injuries sustained by American soldiers. They really put their weapons in the knee. A mortar, even a small caliber, always remains a mortar. 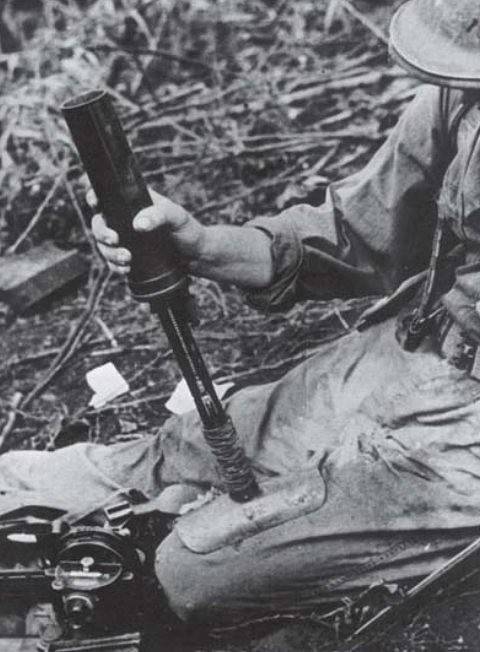 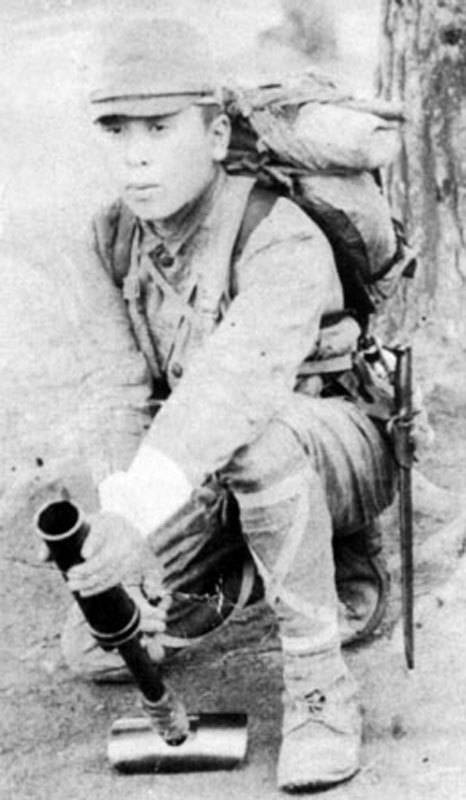 We specifically focused on small-gauge mortars. Just because, as life has shown, the time of these small, but evil defenders of the infantry is gone. Their place was firmly occupied by grenade launchers of various types and purposes.

In a world where missiles are the most terrible weapon for most ordinary people, there was no room for small caliber. But I will repeat my idea expressed in the first article: mortars were and remain a real weapon of mass destruction. Those pipes with a tripod and a large stove. They kill the most people. And in the Donbas, and in Syria, and in other hot spots.