April 25 2018
125
The agency Bloomberg, citing its sources, wrote that Vladimir Putin plans to sign a package of documents (or a decree) after the inauguration, the purpose of which should be to accelerate economic growth and improve the quality of life for Russians.


The signing of this decree will be a natural continuation of that part of the presidential address, which was devoted to the economic and social aspects of the development of the state. The plan of a “decisive breakthrough” in raising the standard of living of Russians should in sufficient detail and gradually describe the program of public investment in health care, education and infrastructure. According to the developers of the document (or sources of the Bloomberg agency interpreting developers), it is these sectors that should become the locomotives of the growth of the Russian economy, directly affecting not only the income level of Russians, but also their quality of life.

Presumably, in the period from 2020 to 2030, over ten trillion rubles will be allocated within the framework of the plan. This figure is not final and it can still change. But it is obvious that it will be very large - this dictates both the stated goals and the time frame within which it is necessary to achieve such significant results. 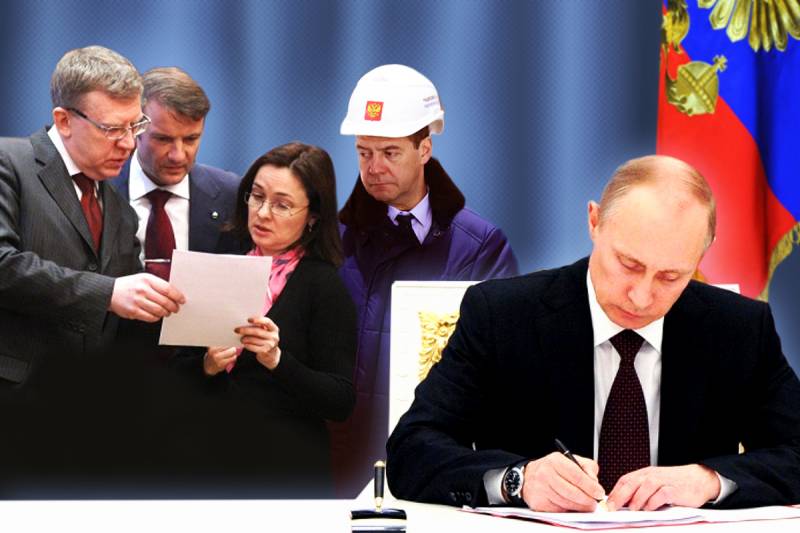 But is everything as good and positive as it looks at first sight?

Attentive people immediately suggest an analogy with an equally large-scale program of re-equipment of the Russian army, which is already coming to an end, at least to an intermediate one. The analogy is relevant: the same order of numbers (there were about twice as many, but the financial capabilities of the state at the time of its adoption looked more serious, because there were no sanctions or devaluation yet), and comparable implementation dates. But still, direct parallels are probably not worth it. And that's why.

The implementation of the current rearmament program of the Russian army is quite successful. We will not bore the reader with numbers - just remember the effective and highly qualified actions of the Armed Forces of the Russian Federation in Syria or earlier when the Crimea returns to the Russian Federation. Yes, and the military innovations recently announced by the president could hardly have come into being if it had not been for the substantial funding of the relevant scientific and technological programs made possible by the above-mentioned rearmament program.

But even while stating the obvious successes, it is impossible not to note the many problems that Russia faced in rearming the army. They were both natural and subjective, and appeared due to various reasons: the technological difficulties caused by years of neglect on our military production, and sanctions, and breaking ties with suppliers from Ukraine, and the devaluation of the ruble in 2014, and, wherever without it, theft, incompetence, professional failure of some responsible and authorized persons. A strong blow fell on the program of re-equipment of the Navy of Russia, not all succeeded in re-equipping the VKS, and the other branches of the troops did not escape cuts, transfers and the like.

And this, notice, in the defense industry, where we have traditionally strong positions, is an excellent scientific and technological school, the most serious and not completely plundered industrial facilities, and not only the Ministry of Internal Affairs and the prosecutor's office, but also the FSB controls the control.

And what will happen in the initially civil spheres, from where not only lazy?

It causes great doubts and a list of priority areas that should be "breakthrough." No, at first glance, everything looks great - and health care, and education, and infrastructure are extremely useful for improving the quality of life, and arguing with this is stupid.

But can they become growth locomotives? Big question ...

In general, the first thing that came to my mind was Skolkovo. There is a huge similarity with this interesting (potentially) project. There, too, research priorities were very nicely selected: biomedical technologies, space, energy efficiency, computer science, telecommunications, nuclear technologies, and the like. But the trouble is: the country does not have its own microelement base, the development and production of machines in a terrible state, almost no modern scientific instruments are manufactured, and so on. And it is absolutely obvious that for the beginning we needed a separate Skolkovo for the development and production of chips, another one for high-precision metalworking, one more for instrument-making, optics, 3D printing, chemistry and materials science.

And only then, when all this would firmly stand on our own soil, and we would learn not only to invent something new, but also to produce it on our machines and production lines, to equip it with electronics, Skolkovo in its current form would be very useful to us . But no, Dmitry Anatolyevich loves to “iPhone and nanotechnology, Russian Google and robots”. Yes, and “sawing the loot” on “venture investments in the IT sector” (this, by the way, is the most ideal “roof” for theft, where Khodorkovsky is there with his “well fluid”) immediately found many willing people.

Returning to the alleged decrees of the President of the Russian Federation, we can assume that they will not be completely viable in our realities. For example, investment in health care as an engine of the economy reminds me of something suspicious. Wait, this is ...

This is a tracing from the Clinton recovery program and accelerating the growth of the American economy, isn't it? Well, yes, it is: there was such an American president, Bill Clinton. Once he won the elections in the United States and conducted a fairly successful health care reform, which had a very positive effect on the entire American economy.

But the trouble is: the proportions of paid medicine in the United States and in the Russian Federation are simply not comparable. And what revived the American economy is unlikely to have the same beneficial effect on the Russian one. Moreover, taking into account the fact that the production of medical equipment, medicines and instruments is in a very sad state, the implementation of such a large-scale program will certainly not be complete without massive imports.

Worse that it somehow began to work for general economic growth, medicine in Russia should become a business, like in the USA. That is, if you do not have good insurance, you can not even pull out a tooth from a doctor. Interestingly, even free ambulance leave us?

Equally doubtful are the investments in education.

No, this is great at all! But to ensure the economic breakthrough as one of the drivers of growth is not suitable at all. The only thing that comes to mind is the construction of new schools and universities, and the employment of several tens of thousands of teachers. This, of course, is very good, but obviously not enough.

So what remains to us as a growth locomotive? Infrastructure investment? Sounds good, but too blurry. We have a lot of different infrastructure that needs investments. Maybe we will build roads and bridges. Or perhaps to develop mobile communications of a newer generation and blockchain technology. Both are very good. But if we build roads and bridges using Japanese equipment, by Tajik workers and under the control of contractors registered in the next British offshore, we will again get something, only half good. Yes, it will be a little like South Africa - very good blacks are working on imported cars on good roads.

By the way, with the same mobile connection история - if we develop it on Chinese equipment, and call each other on Chinese phones, our program will contribute significantly to the growth of the Chinese economy. And we will have a good connection. And cryptocurrencies on the blockchain, so that the next offshore contractor would be more convenient to withdraw money from the country. And this, of course, will very well affect the quality of our life.

But not on income and employment, unfortunately ...

No, not something, but someone ... 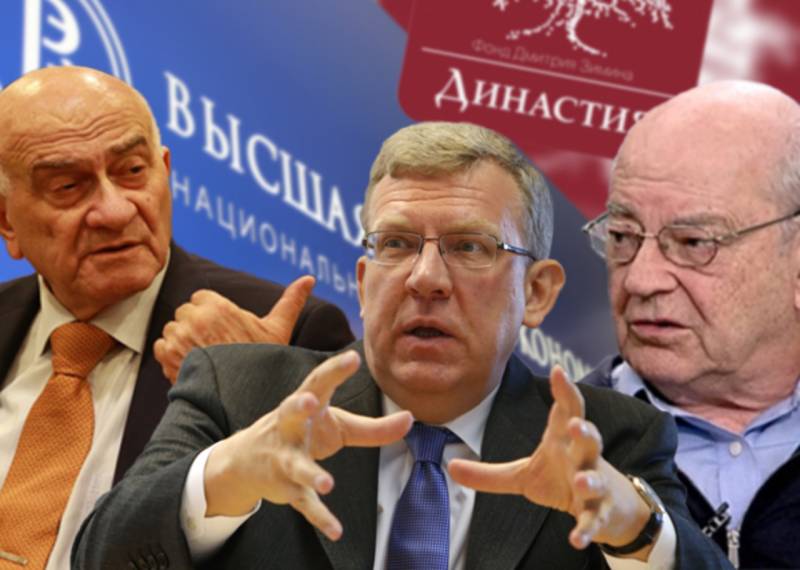 Remember the most brilliant in the universe of the Minister of Finance according to foreign intelligence? Yes, yes, the very one who preferred super-profits from high oil prices to hide in the papers of the American national debt?

Remembering about him, for some reason I always mentally imagine such a scene:

- Dad, we earned so much money! Maybe we build a mill? Or a sawmill? Or a bakery? We will work there with the whole family, make good money, we will finally live like people!

- No, son. We will give money to non-drinking neighbor. Let him build a mill or a sawmill on them, earn, live richly.

- But then, when bad times come, we will be able to take our money back, buy from him the same flour, bread, and wood for the stove. And so, you see, we will extend it to the best days!

Adherents of the “best finance minister”, by the way, are now arguing with might and main that the brilliant Kudrin did everything right - and the truth is, bad times have come, we have used the money, we have not died of hunger. Well, a genius, a visionary, and only.

But for some reason it seems that it was possible to dispose of our oil super-profits a little bit smarter ...

Why did I remember the most brilliant of the genius? Somehow very similar to him. And this tracing of the American experience, which they are trying to thoughtlessly transfer to our soil. And the general stupidity of the program, if it turns out to be exactly what it was announced. And, what to hide, the information available to us that Kudrin was entrusted with the task of developing promising strategies for the economic development of the Russian Federation.

And in general, somehow too much is drawn by banality and incompetence. It simply cannot be that Kudrin did not put a hand on this ...

Still, I really want to believe in the best. 7 will come in May, and the incoming president will sign other decrees.

The decree on withdrawal from the WTO, which we needed only to enable the fifty richest Russians, who are sitting on raw materials exports, metallurgy and mineral fertilizers, to steal more and more efficiently.

The decree on the new rules of customs regulation, from which illiterate liberal "economists" hair stand on end - guard, protectionism, kill!

The decree on the state program of support for agriculture, construction, light industry and the allocation of ten trillion rubles for these purposes from 2020 to 2030.

I want to believe, because it will mean one thing: the state will take care of our incomes, and the growth of the quality of life will follow it automatically.

Ctrl Enter
Noticed oshЫbku Highlight text and press. Ctrl + Enter
We are
Raising the retirement age. Forced measure for the development of the economy or a threat to the social order of the country?Situational analysis of the death of the MH17 flight (Malaysian Boeing 777), made on the basis of engineering analysis from 15.08.2014
Military Reviewin Yandex News
Military Reviewin Google News
125 comments
Information
Dear reader, to leave comments on the publication, you must sign in.