Overton window, or How to legitimize US military aggression

April 25 2018
38
Why does a famous Russian military expert try to equalize the legal status of the Russian Federation and the United States in Syria? 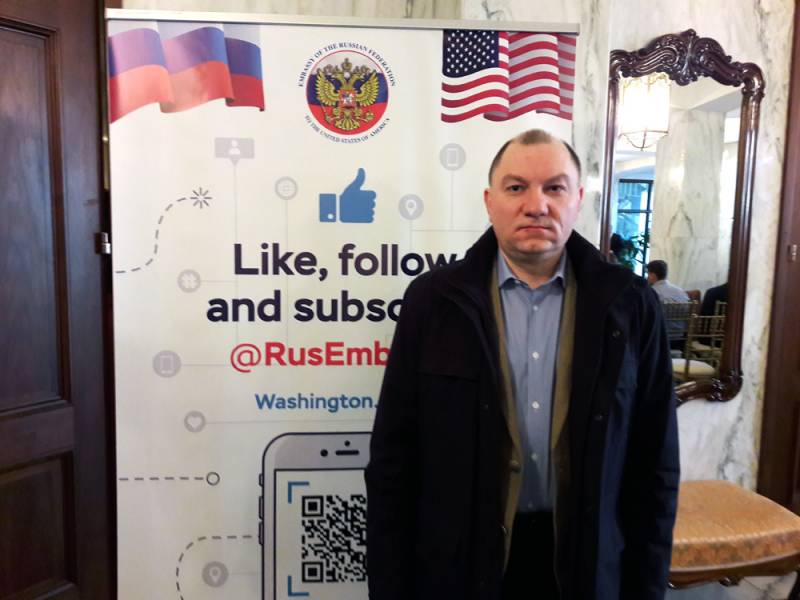 Some time ago, more precisely, a couple of days before the next US missile attack on Syria, an interview with a very difficult military expert — a member of the public council at the Russian Defense Ministry, director of the strategy and technology analysis center Ruslan Pukhov — was published in one of the once most prolific Russian publications. During which the analyst said: "... I do not think that shooting down American missiles would be a good idea."

As it is known, in Syria and, quite possibly, in the RF Ministry of Defense indirectly represented by the same Pukhov, they reasoned somewhat differently and did not begin to sign in advance their own powerlessness before the supposedly all-powerful American "Tomahawks." Who are this expert? expressed in the spirit that it is better not to get involved with them:

"Americans are preparing to launch cruise missiles" Tomahawk ", which can fly at low altitude, skirting the terrain. They are extremely difficult to intercept. C-300 and C-400 are optimized for intercepting primarily aircraft.
On the approach to the target, cruise missiles can be shot by the “Panther”, but they will manage to shoot down no more than three or four. While one American destroyer is able to launch the Tomahawks 70 immediately.

There is also an electronic warfare, electronic jamming, but their capabilities are classified. However, the Americans make their missiles taking into account the overcoming of such systems. ”

I am not going to go into discussion with such a competent master. For me, it is enough that the Russian Ministry of Defense is not a stranger to him completely refuted the myth of the invulnerability of this American “vundervaffe”, reporting the destruction of the Syrian air defense 71 from the 103-launched missiles towards Syria. So now let Mr. Pukhov himself refute the Russian military department, since he is so sure of the unsurpassed perfection of the American weapons.

In general, it is limited to this horror story, I would not even take up the pen. But in the same interview of R. Pukhov, one of the largest Russian publications, which still has a mass audience, was voiced by another topic, which is impossible to ignore. For the power hurt! The Russian (!) Military expert tried to substantiate the legality of the stay of the American armed forces in Syria! And, accordingly, to legalize everything that they do there! Here is the phrase:

“Syria is still not a military ally of Russia, it is a battlefield where a fierce civil war is taking place. We acted on one side of this conflict, the Americans - on the other. When there was a civil war in Russia, until the Bolsheviks defeated the “whites”, Kolchak was just as legitimate a ruler as Lenin. And until the end of the civil war it was impossible to say that the one who supported the Bolsheviks supported the legitimate power, and the one who was for the “whites” supported the illegal one. In civil wars, the norms of international law act somewhat differently. ”

Agree, it is said not without some grace. An expert, after all! Here you and Syria are “not a military ally of the Russian Federation”, and “this is a battlefield” and that the rules of international law are not applicable to civil war. And even Kolchak, like Lenin, is the legitimate ruler of Russia. And all in order to drown in this verbal casuistry one simple and indisputable fact - in Syria there is only one legitimate government, headed by President of this country Bashar Assad.

And do not identify the current Syrian situation with Russia since the revolution and the civil war. For in Russia both Lenin and Kolchak really had about the same, that is, very distant, relation to the legitimate Russian power, which, in fact, ended after the abdication of Tsar Nicholas II. And, accordingly, they could equally claim to the vacant Russian throne.

In Syria, the situation is exactly the opposite. Here, no one overthrew the legitimate authority, although they tried. She, as she was, is in the person of President Assad. And there is absolutely no reason to put it on a par with all sorts of "booths" and "Vorlords".

It is at the official invitation of this legal authority, that is, on 100% legal grounds, that the Armed Forces of the Russian Federation are deployed in Syria. In turn, the United States did not receive any invitation or permission to deploy its troops from the legitimate Syrian government. And even more so for the conduct of hostilities in the territory of this country.

What follows is an absolutely indisputable conclusion that, from the point of view of the fundamental norms of international law, which are by no means so “volatile” as Mr. Pukhov thinks like, the US troops are and operate in Syria absolutely illegally. That is, they commit armed aggression against this country. What is strictly forbidden to do by the UN Charter and qualifies as an international crime.

Therefore, there can be no question of equating the role of Russia and the United States in Syria, the difference between which, according to the military expert mentioned, is that the two countries have taken different sides in the Syrian war. But these parties, they say, are absolutely equal and have the same right to be considered legitimate.

Such a position of R. Pukhov, to put it mildly, badly fits in with the facts. If only because what is happening in Syria is considered by many to be not a civil war, but inspired by the West, in the framework of the so-called “Arab spring”, an armed rebellion against the legitimate authority. As well as foreign military intervention, carried out both in latent form, through the support of local mercenaries, and in direct - through rocket-bomb strikes of the US Armed Forces.

But what's more, this point of view completely contradicts the official position of the authorities of the Russian Federation, which has been repeatedly voiced at the highest level. In particular, Russian President Vladimir Putin in his recent telephone conversations with Western leaders, including German Chancellor Merkel and French President Macron, clearly stated that the rocket attack of the Western coalition on Syria 14 April this year. was a gross violation of international law and an act of military aggression against a sovereign state.

Meanwhile, a respectable Russian military expert close to the leadership of the Russian Defense Ministry, from the pages of one of the largest Russian publications, talks about a certain equality between Russia and the United States, which, they say, differ only in the fact that they support different parties in the Syrian "civil war"!

Needless to say, this kind of reasoning is completely correlated with the official position of Washington, which declares to the whole world that it has some kind of “exclusive right” to climb without demand into the affairs of the same Syria and any other country in the world. “Right”, which nobody gave him, which is not written anywhere and in fact is just a smoke screen for the US military aggression against any country of the world of their choice.

And it’s even more incomprehensible why a Russian military expert is pouring water on this American mill so diligently. To whom it is much better to defend the state interests of their country and the world law and order rather than open new Overton window vents, putting Russia on the same footing, having a legitimate mandate to render assistance to Syria, and the United States, which without any mandates just want to bomb another insubordinate country.

Ctrl Enter
Noticed oshЫbku Highlight text and press. Ctrl + Enter
We are
Situational analysis of the death of the MH17 flight (Malaysian Boeing 777), made on the basis of engineering analysis from 15.08.2014Results of the week. "God forbid to see Russian revolt, senseless and merciless!"
Military Reviewin Yandex News
Military Reviewin Google News
38 comments
Information
Dear reader, to leave comments on the publication, you must sign in.