Government debts? Only cowards pay them! 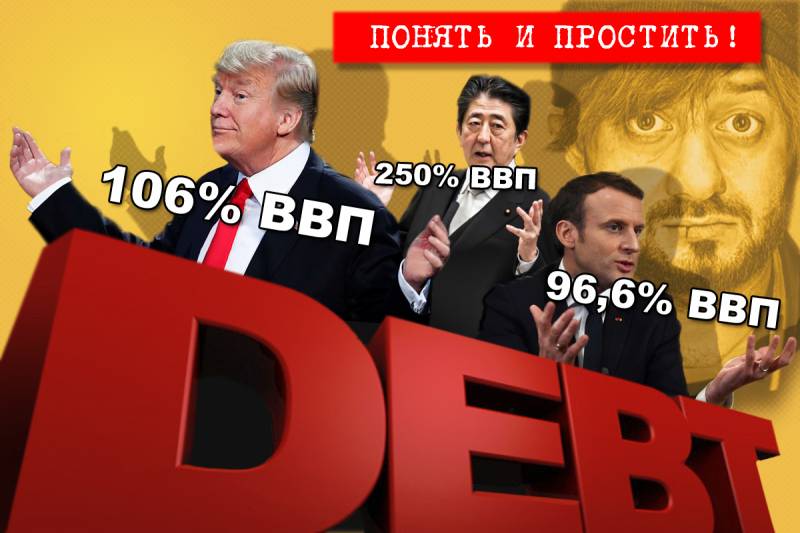 “Collect money as much as possible, for money is the artillery of war,” wrote our sovereign Peter the Great from the fronts of the Northern War to his own courtiers. He was very proud of the fact that all the military campaigns he led carried out “on his own”. And, against the custom of European rulers, he did not make public debts to other powers. The state vaccination from his elder brother, Tsar Ivan the Fifth, with whom he had divided the throne for fourteen years, was strong in him. It was under the joint rule of the kings Ivan and Peter buy from Poland for cash, Kiev and all of Ukraine, located on the left bank of the Dnieper. The stable financial position of Russia allowed these kings of FOURTHES to lower taxes for the population, to conduct extensive stone construction in Moscow and to transfer the army to new, European orders.

State taxes at the beginning of the 18-th century almost entirely went to the army and the maintenance of the court. Gathered a little more than four million rubles. Upon the death of Emperor Peter the Great, Catherine the First lowered taxes, the reduction amounted to 4 pennies per capita, with the condition that the serpent spent the money on "the eternal remembrance of the emperor's memory." She liked that the budget would be equal to a round sum of four million rubles. Catherine the Second, who, during her reign, made crazy war debts to the Dutch States, canceled this relief. Russia paid these debts to 100 for years and settled at the very end of the 19 century, during the reign of the young Nicholas II.

Such long payments on military credits are not news for military storiesNot so long ago, the United Kingdom paid off some debts that had been hanging since the middle of the 18 of the 20th century.

State loan - weapon much more terrible than gunpowder; the weapons that the state was supposed to use under the threat of national humiliation, - so did the economist of 19 of the century, J. B. Say He was echoed by Malthus, who considered a large public debt "cancer, eating away at the political life of the people and their welfare." But not everyone was so pessimistic.

Economist Karl Dietzel proclaimed to the applause of the financial elite: “The people are richer, the national economy the more progressive, the greater the share of public expenditures of total government revenues is absorbed by interest payments on public debt” ("Das System der Staatsanleihen im Zusammenhang der Volkswirtschaft betrachtet", 1855).

At the end of the 19-th century, the industry of Russia was built unusually quickly. Hundreds of enterprises, banks, kilometers of tram lines, mines and mines appeared by magic. Those who are curious about what they built, refer to the directory “Factories and Plants of All Russia”, 1913 Year, the publishing house of the partnership L.M. Fish, Kiev. The handbook gave information about 31523 plants and factories, was sold for 4 rubles. A wealth of material for reflection is given by the surviving shares of joint ventures that some lovers of antiquity collect in the collection. Brilliant life, lackeys, cadets and the crunch of French bread in the ravishing evenings were paid for by private and public loans abroad. Already in 1884, Russia should have spent five and a half billion rubles and spent more than 200 millions from the 750 million annual budget to service the debt. The growth of debt occurred in what was then England, but it was hardly anyone who scratched, for the welfare of the nations and budget revenues grew by leaps and bounds.

And everything was great until a protracted world war broke out. All warring states have sunk in revenues. But bankers and creditors did not want to enter the position of emperors. It became somehow uncomfortable in the ministries. State programs were reduced, and prayers were extended. For 1914 a year 2,5 billion rubles were spent on the war, 1915 billion in 9,4, 1916 billion in 15,2, and 1917 billion in two months 3,3. That is, the war ate 30,5 billion. This is the country's income for almost 10 years! We had to win, because then it was possible to get reparations from the defeated Germany. But something was not defeated. Citizens hid the cash gold, then silver, and then it became stupid to miss paper money to maintain the normal operation of the state machine. Suddenly, they remembered about saving, by which they finally finished off the economy.

In February, the 1917 monarchy in Russia self-destructed, unable to withstand the tears of the empress after the death of Rasputin, the shortage of French rolls in the shops and the sailors, who were deprived of cocaine and idleness in the barracks. The sufferings of the Russian imperial house were not impressed by anyone in the world, since the German, Austro-Hungarian and Ottoman empires disappeared almost overnight from the map. That's just the debts.

The external pre-war debt of Russia, taking into account mutual claims, was determined in the amount of 4,2 billion gold rubles (excluding the German one about 1,1 billion) plus 970 million ruble railway loans, 340 million city loans and 180 million land bank loans. Total about 5,7 billion gold rubles. In addition, 3 billion in foreign investments in joint-stock and non-equity enterprises were mentioned. The military (1914 — 1917) foreign debt of Russia was approximately 7,5 billion gold rubles. Russia in fact was bankrupt, it would have been necessary to spend 100 years with hooks on the correct payment of debts. In 1918, the Leninist government defaults on foreign powers and refuses to pay its debts. Entente responded with intervention. The hungry and lousy proletarians took up their rifles, from which they did not have time to wean.

In 1922, Lenin sends comrade Chicherin, Krasin and a group of specialists to the Genoese conference, who, after epic, incredible negotiations and scandals with bourgeois, slowly dissolve most of the money claims, mainly due to offsets. Nobody wanted to fight again with the RSFSR, and only because they had to negotiate.

In Germany, things were even worse. The economy is in ruin, deprived of colonies, the land was taken. It was hard - inflation, starving fainting in the lines for bread. Parsley planted between railway sleepers. The victor states counted a huge contribution to the former empire. The Germans said no money. Debt counted downwards. And so it is not. Debt once again counted. The Germans paid a little and asked for a loan again. The debts were recalculated once more and the final amount of gold marks for Germany was appointed. It seemed that bankers life is getting better. And here comes Hitler to power. In 1933, he combed his mustache in front of the mirror, stroked his bald patch and imposed a moratorium on the payment of public debt.

In 1945, after the victory over Nazism, the victorious countries remembered the debt for the First World War. The Germans threw up their hands and said: "There is no money, however, our country is divided." Churchill, Hoover, de Gaulle and others said sadly: “Ok, give when you are one.” It's been almost 50 years. Germany swallowed the GDR, shining from sausages and beer. Everything is fine. The Bundeswehr is tiny, military spending does not exceed one and a half percent of GDP. And then ... "Germans, let's go to the cashier, you have to pay the costs of the First World War." Men with the corporal manners in Germany in the middle of the 90's were not found. Germany paid in gold its imperial debt.

In Russia, the army in 1996 year in deep knockout. Soldiers and junior officers suck paw. Against the background of the first Chechen war, airplanes are vigorously sawn and missiles poured with concrete. Submarines go to scrap for the price of scrap. Prime Minister Viktor Chernomyrdin and his French counterpart Lionel Jospin agree on the figures ... and Tsarist Russia’s debt to the French holders of “Russian bonds” was fully paid in the same 1996 year. 50 million dollars as one penny. Now, in 2018, a new wave of claims to Russia is about maturing in France by about 30 billion dollars. Russia is not bankrupt for a long time, let it pay.

Our politicians, like the Little Prince from the writings of Antoine de Saint-Exupéry, feed on sunshine and good wishes. They are not as greedy for money as their overseas and European counterparts. Or maybe they just live with complete amnesia of historical memory.

In September 2017, Russian President Vladimir Putin announced that our state had written off more than $ 20 billion in debt to African countries. For all the years of the new Russia, we forgave debts to other states. For example, Vietnam was written off $ 9,5 billion, Algeria - $ 4,7 billion, Libya - $ 4,6 billion, Syria, in which there was no war in 2005 in the year, forgiven about $ 10 billion. And Iraq and others are on the list not the poorest countries. In 2012, Russia forgave 90% of its $ 11 billion loan for North Korea, which was issued to the USSR for the development of industry, the purchase of weapons and other purposes. A natural question arises: what, really, absolutely no power to get gold and silver from debtors? Where we rush to write off debts? Maybe you need to stupidly wait?

Apparently, we can neither wait nor take. No leverage. Here is America. 17 March 2018, her debt has passed the mark of 21 trillion. dollars and amounted to 106% of US GDP. The political elite of the world expresses deep concern, but, in principle, everyone deeply does not care how much the States should. The principle of power in accounting has not been canceled. Come and get it.

Japan’s national debt (which the liberals like to give us as an example as a civilized country) amounts to slightly more than 250 percent of GDP. What does not prevent the descendants of the samurai to make scary eyes and demand from Russia the Kuril Islands.

France, bombing Syria along with America, should roughly its annual GDP. But Macron does not wake up in a cold sweat because of government debts. Does not turn out the pockets of French taxpayers. Imperial ambitions and nuclear bombs make it possible to delay debts for an indefinitely long term. The economist Karl Dietzel, whose business is flourishing, knew the history of the Middle Ages. All European sovereigns were to the Italian money-changers, but they could never dictate their will to the strong. At all times they only profit from the weak. On the tables of world history, it is stamped in gold letters: "Only cowards pay debts."