Has Kim Jong-un leaked its US nuclear missile program or not? (part of 1)

April 24 2018
25
A few days ago, on April 20, in the capital of the DPRK Pyongyang, a plenary meeting of the Central Committee of the Labor Party of Korea (TPK) took place, where, among others, decisions were made regarding nucleararmory and the DPRK missile programs. Moreover, decisions that can be regarded as a "drain" (as they like to say on the Internet) of their position on this issue. They can - but should not, because it is not a "drain". 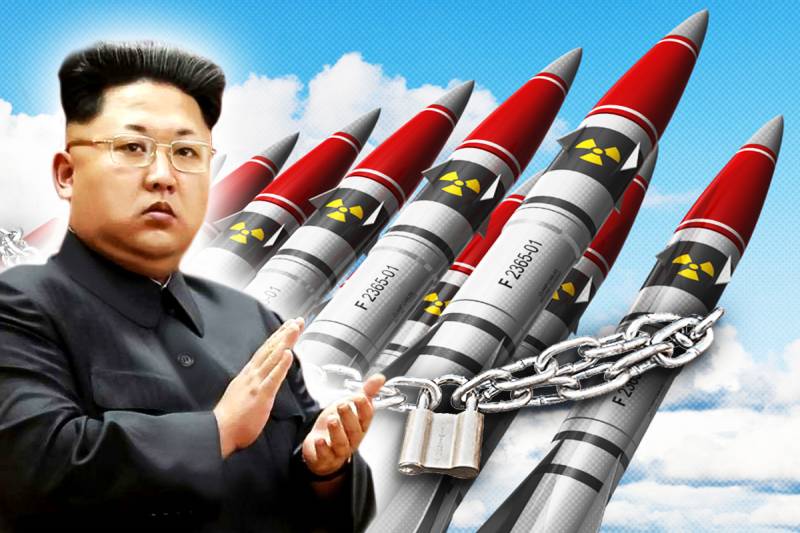 What did the North Koreans say?

So what exactly was said? Let us turn to the message of the CTC (spelling and style are preserved, only in particularly flagrant cases like "super-powerful nuclear weapons" - corrected).

The Chairman of the TPC noted that after the announcement of the improvement of state nuclear forces last year, thanks to our initiative actions and efforts, the overall situation suddenly turns into a phase favorable for our revolution. And he reported that a new trend is emerging on the Korean peninsula and the region to ease tensions and peace, and dramatic changes are occurring in the structure of world politics.
He said that the miraculous victory of accomplishing the historic work of building state nuclear forces in a short time — less than 5 years — represents the great victory of the TPK course on parallel leadership, as well as a brilliant victory that only the heroic Korean people could achieve.

We will miss the extra “water”, we turn to the final resolution of the Plenum of the Central Committee of the WPK.

In the decree “On declaring a great victory for the course of parallel conducting of economic construction and construction of nuclear armed forces,” the following is noted.
First, it solemnly announces that in the course of the struggle to implement the party’s parallel course, critical nuclear tests, underground nuclear tests, miniaturization and lightening of nuclear charges, the development of super-powerful nuclear weapons and vehicles were carried out in a regular manner. nuclear weapons were carried out.
Secondly, it will cease nuclear testing and test launches of ICBMs from April 21 of 107 of Juche (2018).
To provide a transparent guarantee of the cessation of nuclear tests, it will stop using the northern test site of the Republic’s nuclear tests.
Thirdly, the cessation of nuclear testing is an important process for the global reduction of nuclear weapons, and our Republic promotes international efforts and efforts to comprehensively end nuclear testing.
Fourth, they will not use nuclear weapons until there is a nuclear threat and provocation against our state, and in no case will they spread nuclear weapons and equipment.
Fifth, they will make every effort to fight for raising a powerful socialist economy and for steeply raising the life of the people, mobilizing all the human and material resources of the country.
Sixth, it will prepare a favorable international environment for socialist economic construction and, to protect peace and stability of the Korean Peninsula and peace, to intensify close ties and dialogue with the surrounding countries and the international community.

That is, it is stated that the main work on the creation of nuclear weapons, including high-power ones (note that they do not call them thermonuclear, although they had previously claimed that they had mastered the thermonuclear device) were practically completed, and therefore, they say, the need to continue tests do not test and will not use the site. And do not close it at all. And it is impossible to close the nuclear test site completely, because it is necessary to conduct subcritical experiments somewhere, it is also necessary to protect the former test sites from crazy lovers or climb cattle - and the test sites themselves are of interest to researchers.

They also say that they are stopping the testing of ICBMs without saying anything about BRSD or SLBM, and about short-range missiles. And about the termination of tests forever - also not a word. As there is not a word about the refusal, it is not that of a nuclear weapon, but of its further production, the development of components and materials, the release of the same ICBMs. Then followed the standard mantra of both new and old nuclear powers, that we are for stopping the tests and will not use nuclear weapons if there is no nuclear threat to us.

These mantras are poorly related to reality, because the thesis of non-use by the first and superpowers do not adhere. The United States has never adhered to it, they generally have a "sharpened" SNF under the first blow, this is clearly visible even in the strength of their mine ICBM launchers, and not only that. The USSR officially took upon itself a similar obligation, but even then it was nothing more than boltology - the first blow as a method of use existed and was called “a strike at the appointed time”. The Russian Federation has never taken on such obligations. But the DPRK does not look like a gang of thugs with a stolen bomb, which of them are molded in the West, but a solid, albeit young, nuclear power with adequate leadership, and therefore tries to be such statements, as it is now fashionable to say, "in trend." We will not discuss all other statements for world peace and the friendship of wolves and sheep and the steady increase in well-being - we are also for all the good against all the bad, but why waste time on blamelessness?

But in the sixth test, the power was rated much higher. The first estimates were 50-70act, then immediately in 100-120act, later, according to updated data on the magnitude of the impulse, various structures of various governments issued estimates in 160, and in 250, and in 280, and in 300 and even in 450ct. If based on the data of the RF Ministry of Defense, as the most accurate, according to the magnitude of 6.3, then it is possible to estimate the power of the sixth test before 1 megatons. But most likely, it was smaller, say, in the 300ct area, as is usually shown in our documents. Moreover, such power does not guarantee that the explosion was thermonuclear.

If you really want to, then you can also do a conventional nuclear bomb in 500ct, as the Americans did, even by adopting such an armament and testing Ivy King - they were not sure that they would “merge” with the hydrogen bomb and insure themselves. But the resulting device was heavy, cumbersome, very “dirty” (for residual radiation, although then few people were concerned), and most importantly - unreliable and dangerous, because the mass of individual “pieces” of the charge was not far from critical. Because they were quickly converted into thermonuclear. It is unlikely that the North Koreans began to do something similar, but they could make a tritium-enhanced nuclear bomb. A “forced” nuclear device with tritium amplification is when the power of a nuclear charge increases due to a deuterium-tritium mixture placed in the center of a “bagel” of uranium rings, where the mixture is a source of neutrons for uranium (and not as in a thermonuclear bomb, where it gives the main energy of the explosion). Such a device quite gives the desired 200-500ct with quite decent dimensions and weight, although it does not provide the convenience and compactness of a normal thermonuclear bomb (of course, the talk is about the normal level of "thermonuclear" technology, and not like a house-sized device in the first hydrogen explosion of Americans) .

On the other hand, the Koreans at the same time showed the charge itself, which allegedly blew up. More precisely, the layout of the charge. But it may well be both a mock-up of their real thermonuclear charge, and a “fake” for misleading. But the very form of the device strongly resembles a reduced thermonuclear charge for one of the early US ICBMs, and there is enough information on the Internet on it. So with the thermonuclear North Koreans have more questions than answers.

It was possible to figure out what was blown up, except that the reconnaissance aircraft VKS, the US Air Force or the PLA Air Force, equipped with the appropriate reconnaissance equipment, could draw some conclusions about the structure of the charge from weak radioactive traces in the air. But no one did not disclose this information. In general, the tacit official position of the world community is that there was a "thermonuclear" (but in the domestic documents tritium amplification is mentioned). In any case, there is a charge of “adult” power and quite suitable mass and dimensions, and there are no Koreans. Especially, if someone shares with them statistics on the tests (for example, Chinese) or mathematical model for calculation on supercomputers. No need to think that in the DPRK they count on accounts and do not have supercomputers - yes, they cannot be found in Top-500, but there is no supercomputer at the National Center of Investigations of the Ministry of Defense of the Russian Federation either, although it should have been in very honorable places characteristics. In addition, after conducting all 6 explosions, it is impossible to go through a rather complicated path of miniaturization of charge without an external data array. Moreover, it took China 45 tests and decades, and problems with miniaturization still exist. So, the separable warheads of individual targeting (RGCHIN) were promised to the party and the government in 1987, and they appeared only now, all known launches with a ridiculous amount of charges like 2-3). The DPRK, however, is not yet needed for RGCHIN and their task is much simpler - to make a decent charge in half a ton-ton, and so that it does not collapse, entering the atmosphere at "intercontinental" speed. However, it is not easy.

In addition, there is information that during the 6 test, tunnels collapsed at the test site and partially need to be rebuilt - that is what there is to do on the sly. Moreover, the “DPRK’s completion of the creation of nuclear weapons” has already been stated earlier, it will be necessary - they will forget about this statement. Especially since the North Koreans are playing with shulers from the USA. We can recall how in October 2000. The old hag Madeline Albright clinked with Kim Jong Il, who promised to "stop the rocket launches" in exchange for various preferences, and a year later the DPRK turned out to be ranked as the "axis of evil" and all the agreements were ruined. There were also earlier "cessations" of the DPRK nuclear missile programs, by agreement with the United States - for example, in 1994. Well, there will be another one, it is a pity, is it, to whom? But there are charges, they are produced and stored, and their improvement continues. In general, it can be said that India and Pakistan also confined themselves to 6-7 tests, and they are considered and are somehow nuclear powers, and even never once did not reliably detonate Israel - either.

But the DPRK "do not recognize", No way! But does it somehow affect the real situation?

Ctrl Enter
Noticed oshЫbku Highlight text and press. Ctrl + Enter
We are
Situational analysis of the death of the MH17 flight (Malaysian Boeing 777), made on the basis of engineering analysis from 15.08.2014Results of the week. “In our cooperative, the board is always agreed”
Military Reviewin Yandex News
Military Reviewin Google News
25 comments
Information
Dear reader, to leave comments on the publication, you must sign in.