The mystery of the German losses in World War II. Part II. About Krivosheev

April 23 2018
37
Summary of the last part: approximately 19 million people were mobilized to the German armed forces (WASH) during World War II. But how many WASH lost in the war? It is impossible to count this directly, there are no documents in which all the losses would have been taken into account, and it only remained to lay them down to get the necessary figure. The mass of German soldiers was out of action without any reflection in any statements. 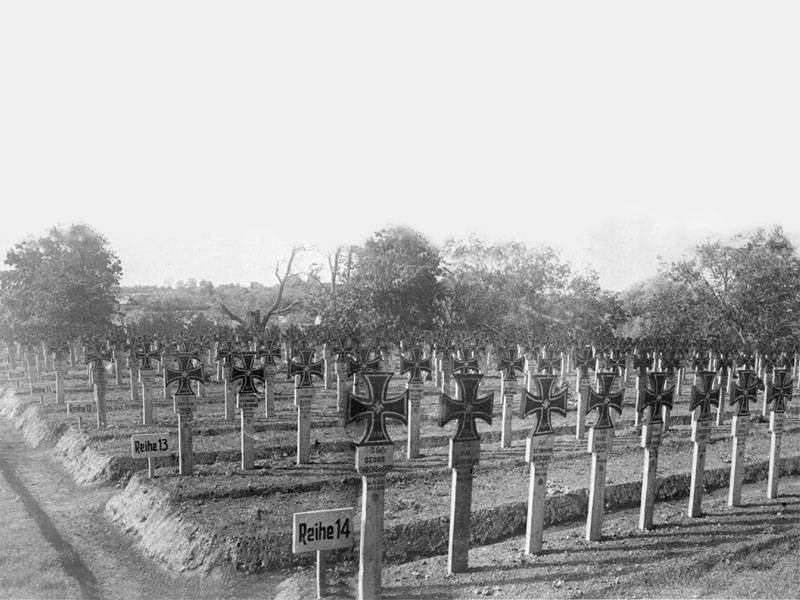 Militaryhistorical the team led by Krivosheev stated: “the determination of ... the losses of the armed forces of Germany ... is a very difficult problem ... this is due to the lack of a complete set of reporting and statistical materials ...” (quote from the book “Russia and the USSR in the wars of the XX century”). To solve the problem of determining German losses, according to Krivosheev, it is possible by the balance method. We need to see: how much is mobilized in the WASH and how much is left at the time of surrender, the difference will be a decrease - it remains to distribute it for reasons. The result was (in thousand people):

Balance according to Krivosheev: mobilized in the VSG - 21,1 million, of which 4,1 million (+ 0,7 million injured in hospitals) remained to surrender. Consequently, 16,3 million were eliminated during the war - of which 7,4 million were captured, 4,4 million were crippled or sent to industry; there is 4,5 million - this is the dead.

Figures Krivosheev have long been the object of criticism. The total number of mobilized (21 million) is overestimated. But the following figures are clearly questionable. Unclear column "demobilized for work in industry" - 2 000 000 people. Krivosheev himself does not provide any references or explanations for the origin of such a figure. So he just took it from Muller-Hillebrand. But how did you get this figure M-H? M-D does not give references; his book is fundamental, it doesn’t refer to anything, it refers to it. There is an opinion that these were soldiers, who were seriously wounded, because of which they could no longer do military service, but were still able to work. No, this contingent must be included in the column demobilized for disability (2,5 million people).

Unclear with the number of prisoners. 7,8 million counted as surrendered during hostilities. The number is incredible, the ratio of those who surrendered and died in the German army simply was not like this. After the surrender, 4,1 million more surrendered; 700 thousand were in hospitals - they should also be attributed to the captive. 7,8 million prisoners before surrender and 4,8 million after, total: German soldiers captured - 12,2 million

Krivosheev gives statistics: our troops reported on the capture of 4377,3 thousand prisoners. Of these, 752,5 thousand soldiers of the allied German countries. 600 more thousand people. were released directly on the fronts - it turned out that they were not German military personnel. It remains approximately 3 million.

The number of captured is really huge. But the problem is that it was not only German soldiers. There are mentions that firefighters and railway workers were in captivity (they are in uniform, men of military age); police officers were taken prisoner by all means; the same applies to members of militarized organizations, as well as the folkstorm, the German construction battalion, hiwi, the administration, etc. 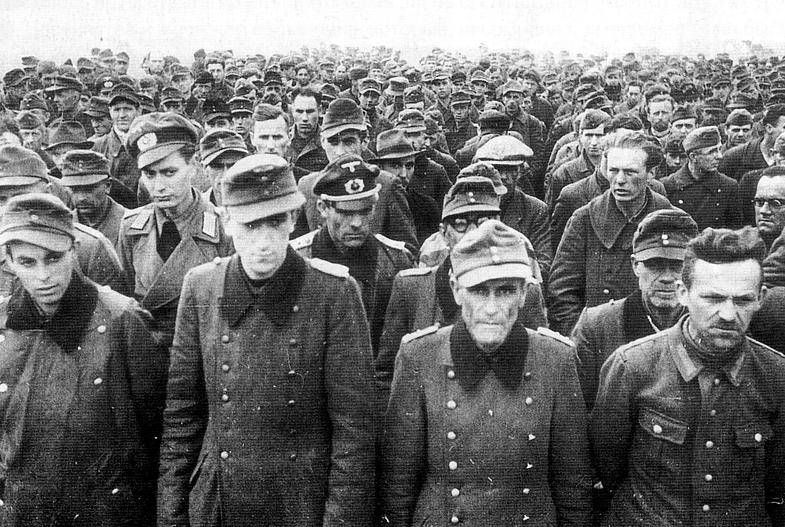 From vivid examples: the troops reported that 134 000 prisoners were taken in Berlin. But there are publications whose authors insist that the German military in Berlin was no more than 50 000. The same with Konigsberg: 94 000 was taken prisoner, and the garrison was 48 000 according to German data, including folkshturm. In general, there were many prisoners, but how many of them were actually military? - It is unknown. What is the percentage of real military among the total number of prisoners - one can only guess.

The Western Allies surrendered 2,8 million people between the landing in Normandy and the end of April 1945, 1,5 million of them in April - the German front in the west collapsed at that time. The total number of prisoners of war counted by the Western allies, by 30 on April 1945 amounted to 3,15 million, and increased to 7,6 million after the surrender of Germany.

Canadian D. Buck drew attention to the huge discrepancy between how many allies captured and how much they then released. The number released is much less than the amount taken. From this D. Buck concluded that up to a million German prisoners died in the Allied camps. Critics of Buck were quick to assure that the prisoners were not punished, and discrepancies in numbers arose because of the disorderly, relaxed account.

Until April, 1945 in Soviet and Western captivity was taken by approximately 1,5 million people (if you count it with all the stretch). The total number of prisoners in Krivosheev is 12 million. It turns out that by April 1945 Germany had an 9-million army - despite all the defeats suffered. And, despite such an army, she suffered a final defeat in a month. Rather, it should be assumed that something is wrong with the calculation of prisoners. Perhaps there was a double counting of the same prisoners. 4,8 million prisoners taken after surrender were mixed with 7,4 million prisoners taken before surrender. So, the figure in 7,4 million taken prisoner before surrender can not be taken.

It is also not clear where the figure in 4,1 came from. The million soldiers who remained in the Supreme Military Council at the beginning of the surrender. 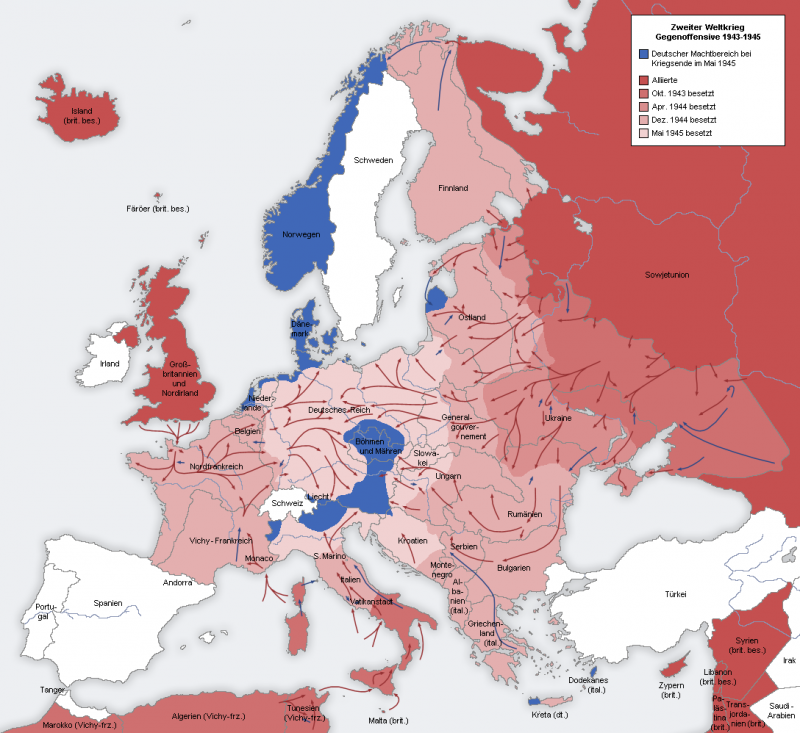 The map shows the territory remaining in the Reich by May 1945. By May 9 this territory has decreased even more. Could there be more 4 million soldiers on it? How was such a number established? Perhaps on the basis of the counting of those who surrendered after capitulation. We return to the question: who was in captivity, considered to be German soldiers?

By May 9, the operating German troops remained only before the Soviet army (in Czechoslovakia, Austria, and Kurland) and before the Yugoslav one. On the western fronts the Germans had already surrendered; there remained only the army in Norway (9 divisions with reinforcement units - no more than 300 000 military personnel) and small garrisons of several coastal fortresses. Soviet troops reported on 1,4 million taken prisoner after surrender; Yugoslavs reported on 200 000 prisoners. Together with the army in Norway it turns out no more than 2 million people (again, it is not known how many of them are actually military personnel). Perhaps the phrase “to the beginning of the surrender” means not by 9 of May, but by the end of April, when the surrender began on the western fronts. That is, 4,1 million in the ranks and 0,7 million in hospitals is the situation at the end of April. Krivosheev does not specify this.

4,5 million of the dead German soldiers - this figure in the end result received Krivosheev. A modern (comparatively) German researcher R. Overmans counted 5,1 million military dead (5,3 * together with dead civil servants (+ 1,2 million civilian dead)). This is more than the number Krivosheev. The Overmans figure - 5,3 million of the dead soldiers - is not officially accepted in Germany, but it is she who is indicated in the German wiki. That is, the society accepted it

In general, Krivosheev’s figures are clearly doubtful; he does not solve the problem of determining German losses. The balance method does not work here either, since there is no necessary reliable data for this. So the question remains: where did the 19 million fighters of the German army go?

There are researchers offering a method of demographic calculation: to determine the total losses of the population of Germany to them, and on their basis approximately estimate the military. There were such calculations on topwar (“Loss of the USSR and Germany in the Great Patriotic War”): population of Germany on 1939 - 70,2 million (without Austrians (6,76 million) and Sudeteners (3,64 million)). The occupation authorities in 1946 conducted a census of the population of Germany - counted 65 931 000 people. 70,2 - 65,9 = 4,3 million. To this figure it is necessary to add the natural population growth in 1939-46. - 3,5 – 3,8 million. Then it is necessary to subtract the figure of natural death rate for 1939-46 - 2,8 million people. And then add at least 6,5 million, and presumably even 8 million. These are Germans expelled from Sudetenland, Poznan and Upper Silesia (6,5 million) and about 1 — 1,5 million Germans fled from Alsace and Lorraine. The arithmetic average of 6,5 — 8 million - 7,25 million

So, it turns out:

However, the 1946 census is much obscure. It was carried out without the Saar (800 000 people of the pre-war population). Did the prisoners count in the camps? The author does not clarify this point; In the English wiki there is an indication that no has been taken into account The emigration inflow is clearly overstated; 1,5 million Germans did not flee from Alsace. In Alsace, however, it is not the Germans who live, but the Alsatians, loyal French citizens, they did not need to escape. 6,5 million Germans could not expel from the Sudetenland, Poznan and Upper Silesia - there were not so many Germans there. And part of the exiled settled in Austria, and not in Germany. But besides the Germans, others fled to Germany - many assorted accomplices, how many were there? Unknown even approximately. How were they counted in the census?

As Krivosheev wrote: “The determination with certainty of the scale of casualties of the German armed forces ... on the Soviet-German front during the Second World War is a very complex problem.” Krivosheev, apparently, believed that this problem is complex, but solvable. However, his attempt came out completely unconvincing. In fact, this task is simply unsolvable.

* Distribution of losses across fronts: 104 000 killed in the Balkans, 151 000 in Italy, 340 000 in the West, 2 743 000 in the East in the East, 291 000 in other theaters, and 1 230 in the final war period 000 495 East to a million), died in captivity (according to official data of the USSR and Western allies) 000 1,1. According to the Germans, XNUMX million died, mostly in the Soviet Union. According to the Soviet accounting in captivity, more than half less died. So, those who died, ascribed to Soviet captivity in Germany, actually died in battle (at least for the most part). After death, they were mobilized again - on the propaganda front.

Author:
Yaroslav 2
Photos used:
From Wikipedia, QIP.ru
Articles from this series:
The mystery of the German losses in World War II. Part I. About Muller-Hillebrand

Ctrl Enter
Noticed oshЫbku Highlight text and press. Ctrl + Enter
We are
The mystery of the German losses in World War II. Part I. About Muller-HillebrandLosses of the USSR and Germany in the Second World War
Military Reviewin Yandex News
Military Reviewin Google News
37 comments
Information
Dear reader, to leave comments on the publication, you must sign in.