April 23 2018
133
After Russian President Vladimir Putin spoke about the latest developments of the Russian military-industrial complex, all of Washington’s propaganda efforts are aimed at convincing Americans and the whole world that Russia is in fact a backward country, and its weapons are outdated and, of course, inferior to Western on most parameters. 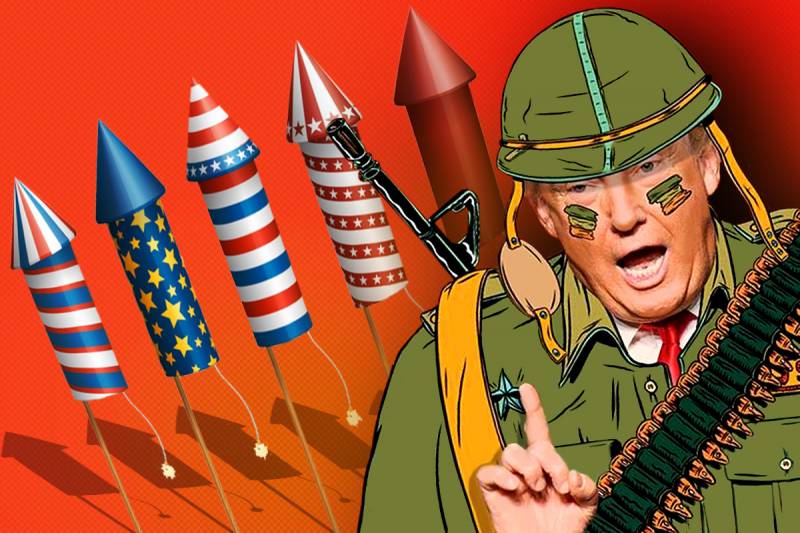 Although from time to time, from the lips of experts and high-ranking US military, there are also opposing assessments, they drown in the general propaganda choir.

A new impetus for "debunking" the military power of Russia was the rocket attack of the United States and its allies on Syria. In particular, Pentagon spokesman Dana White, at a specially convened briefing, announced that the air defense systems operating in Syria had failed to intercept any of the American missiles.

“Of the land-based missiles launched by the Bashar Assad regime, almost all were launched after the last of our missiles hit the target. The missile defense systems produced by Russia were absolutely ineffective, ”said a spokeswoman for the military.

Similar statements were made by a number of American military leaders. In all these statements, there is a rather curious detail - the Syrian air defense systems, which the Americans aggressively call "Russian", are in fact, mostly Soviet, and delivered during Soviet times, and some have passed the age of fifty years.

However, representatives of the US military insistently call them "Russian", making it clear that weapons our country is armed. As if alluding to our technical backwardness.

In fact, a significant part of these complexes was removed from the armament of our army during the times of the USSR.

Although they have undergone a certain modernization in the CAA, all these systems are irretrievably outdated. But even they, as we know, intercepted more than half of the missiles.

In the persistent denial of this fact is seen not only the desire to support Donald Trump, who blurted out for all to hear, that all the missiles of the Americans and their allies hit the target, but also something more that cannot but worry.

The fact is that the American military usually and eagerly speak about the Russian (Chinese, Iranian, and so on) threat associated with the great military power and new capabilities of the enemy, capable of delivering considerable problems to the United States.

In addition to solving such propaganda tasks as creating an image of the enemy, consolidating society in front of external threats, blocking anti-militarist and opposition sentiments, these statements help to solve purely utilitarian tasks: an increase in the military budget, the allocation of additional funds for new developments.

Even during the Cold War, commanders of the United States were more likely to exaggerate the military and technical capabilities of the USSR, and Hollywood contributed a lot to the Pentagon.

After the collapse of the social bloc and the Soviet Union and the concomitant avalanche-like reduction in military spending, the generals seized upon any informational occasion that could be presented as evidence of the emergence of a new threat requiring a response.

The current hats and statements that shape ideas about the weakness of the enemy in society are disturbing because история, they are an obligatory part of the psychological preparation of their society for war along with the dehumanization of the enemy. By the way, today we are also seeing work on the “dehumanization” of Russians in the information spaces of most Western countries.

Recall that the formation of the image of Russia as a colossus on clay feet was an indispensable event for all those who prepared the attack on our country, starting with Napoleon. Moreover, with the Nazis, their well-placed powerful propaganda played a nasty joke. At some point, the leadership of the Reich became more trusting in the materials of the Goebbels department than in the reports of Canaris's subordinates. As a result, from the very first days of the war, the German military faced many disappointments. “The large mass of weapons, their technical quality, the country's gigantic industrialization caused the first perplexing impressions that contradicted the substantial arguments of previous ideas about the Soviet Union,” the security chief and the SD reported in a secret report on the 309 number.

Not without reason, the Secretary of the Security Council of the Russian Federation, Nikolai Patrushev, described what is happening as an ever-increasing threat to national security. “Obviously, in connection with changes in US policy towards Russia, threats to national security are increasing. All this requires the development of additional measures to neutralize them. Among the key ones, it is necessary to solve problems related to increasing the offensiveness of foreign policy, ensuring an adequate level of defense, and the state and public security of Russia, ”said Patrushev at a meeting of the interdepartmental commission of the Russian Security Council on strategic planning.

Ctrl Enter
Noticed oshЫbku Highlight text and press. Ctrl + Enter
We are
Situational analysis of the death of the MH17 flight (Malaysian Boeing 777), made on the basis of engineering analysis from 15.08.2014Syria: Americans scare themselves, and Asma Asad buys chairs
Military Reviewin Yandex News
Military Reviewin Google News
133 comments
Information
Dear reader, to leave comments on the publication, you must sign in.