April 25 2018
8
October 1952 In the village of Tomilino near Moscow, pilot plant No. 918 is being organized to create means to ensure the safety of crews and increase the survivability of combat aircraft. The decision was made not by chance - mass transition aviation jet thrust and a natural increase in speeds and altitudes left little chance of saving pilots in emergency situations. In those days, it was clear that at a speed of more than 400 km / h, under no circumstances would a pilot be able to independently leave the plane without collision with structural elements. The space race with the United States also imposed special obligations on the plant number 918, among which were:


- development of experienced high-altitude spacesuits and anti-grip suits for the crew of aircraft;
- design of aircraft escape systems, ejection seats and special equipment for protecting people after leaving the aircraft cabin;
- research in the field of fire safety of aircraft.

Interestingly, the plant "settled" in the building, previously produced furniture and skis, and the design headquarters were generally sent to a cold basement room - the post-war state of the Soviet Union made itself felt. In the engineering direction of the ejection, work was carried out with the aim of ensuring a safe flight path of the seat with the pilot relative to the aircraft and protection from injury by an aerodynamic flow. For this purpose, multi-tube shooting mechanisms and systems for fixing legs, shoulder tightness, as well as hand scatter limiters were developed. The firstborn were the K-1, K-3 and K-22 seats, providing safe ejection from a height of at least 100 m and speeds up to 1000 km / h. They were actively installed on their cars by the OKB S. A. Lavochkin, V. M. Myasishchev and A. N. Tupolev. The firms of A. M. Mikoyan, A. S. Yakovlev and P. O. Sukhoi independently built emergency escape systems for their products. However, the problem of rescue on take-off and landing modes remained, the solution of which was the K-24 chair, in which a number of new solutions appeared. Thus, an additional rocket engine was installed, launching the pilot away from the ground, and a three-domed parachute system consisting of a stabilizing, braking and main domes. On this actually ended история first-generation rescue systems, the result of which was about 30 different chairs from different developers. By the 60 years, the entire motley company required specific application skills from the pilots, and the staff suffered from “headaches” associated with maintenance and repair. And now in 1965, a resolution was issued by the Ministry of Aviation Industry, according to which Plant No. XXUMX began to create a unified ejection seat for installation on all aircraft of all aviation firms in the country of the Soviets. The main requirement was to ensure safe escape of the cabin over the entire range of heights, speeds and numbers M, including at zero values ​​of speed and height - the so-called “918-0” mode. For those times it was not an easy task - for this purpose, an energy impulse ejector was developed with an increased impulse and a parachute with a forced entry system at speeds up to 0 km / h with simultaneous separation of the pilot from the chair. Rigid telescopic rods with rotating parachutes mounted on the ends provided vertical stabilization, which made it possible to fully realize the rocket engine impulse. All this, coupled with a protective deflector and a set of measures to limit the mobility of the pilot, made it possible to leave the emergency vehicle in a protective helmet at speeds up to 650 km / h, and when using a helmets up to 1300 km / h. In general, the maximum parameters, according to Sergey Pozdnyakov, the Chief Designer of the Stars, under which there was an opportunity to eject - the height is up to 1400 km and the speed is up to 25 values ​​of M! Here are the names of the brave testers who checked the new technique on all possible modes - V. I. Danilovich, A. K. Khomutov, V. M. Soloviev and M. M. Bessonov. The armchairs were named K-3 and existed in three versions: K-36D - for high-speed aircraft, K-36L without deflector - for aircraft with speeds up to 36 km / h and unique K-1100B - for vertical take-off and landing aircraft with an automatic system (!) leaving the cabin. In the latter case, the ejection was carried out directly through the glazing of the lamp - there was sometimes no time to shoot it in conditions of the rapid development of an emergency in a vertical maneuvering mode on machines of the Yak family.

In the history of Zvezda Zvezda, there was a page of “exchange of experience” with American colleagues (of course, in 90-s), during which they developed a K-36D-3,5А armchair, modified under the staffing requirements for accommodating a wide anthropometric crew. On the basis of Holloman in the United States conducted six ejection in various angles of attack, slip, speed and roll. By 1998, American experts unanimously recognized the “Star” as the world leader in the development of life support systems and emergency rescue of pilots. Who knows what the results of this “experience sharing” lay in the design of the US16E ejection seat for the F-35 fighter? 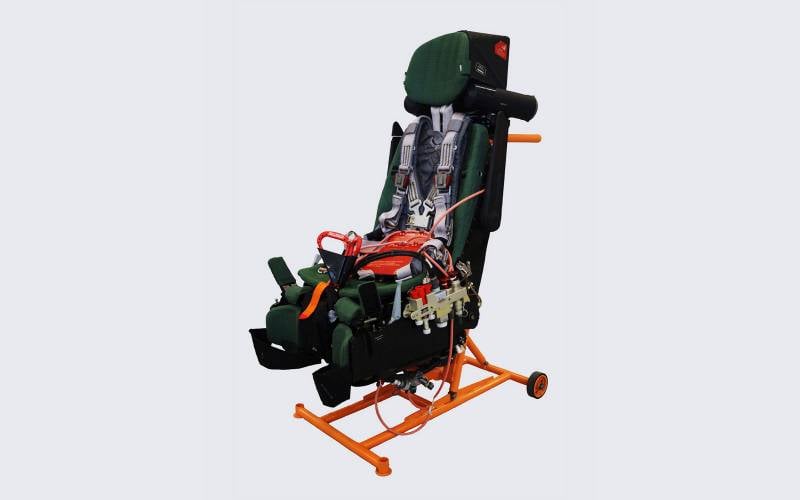 Among the novelties belonging to the Russian period, it is worth noting the K-36D-3,5 chair from 1994 of the year, which received a system that changes the ballistic characteristics of the firing mechanism and the rocket engine depending on the flight mode and the mass of the pilot. Modification 3,5 allows you to leave the emergency vehicle in an inverted position and at extreme dive angles - the control system simply turns off the rocket booster at such times. Such chairs are installed on the MiG-29, Su-27 and Su-30 of all variants, Su-34 and Su-35, and the modification with the memorable K-36Л-3,5Я code on the combat Yak-130. The export model K-36D-3,5E is supplied to India, Vietnam and Algeria, the K-36D-3,5М variant can be found in the MiG-29М cockpits and the ship versions MiG29К / КУБ. Developments on the "thirty-sixth" theme became the basis for the K-36РБ space chair, which provides the opportunity for the crew to leave the Energia-Buran system. The main goal is to eject at the accident at the start, the ascending part of the flight path, as well as during the landing of the shuttle. Difficulty was the need not only to quickly evacuate the crew, but also to divert people to remove 400-500 meters from the rocket, as well as to be able to bypass the tower on the launch site of the cosmodrome during the ejection at the start. Another model from Star engineers, K-93, has a simplified design and is designed for maximum aircraft flight speeds of no more than 950 km / h. The main theme of modernity NPP "Star" is Su-57 with its set of ejection seat K-36D-5, anti-overload suit PPK-7, high-rise compensating suit BKK-17 and protective helmet ZSh-10. The new seat is lighter than its predecessor on 20%, equipped with a heated backrest and seat, and is also able to work autonomously with the complete failure of all onboard warning systems of the aircraft. The output of the autonomous power supply unit to the “combat” mode is reduced to 0,3 seconds, and the new powder charges are designed for the entire service life of the aircraft and are able to withstand a temperature range from -60 to + 72 degrees. 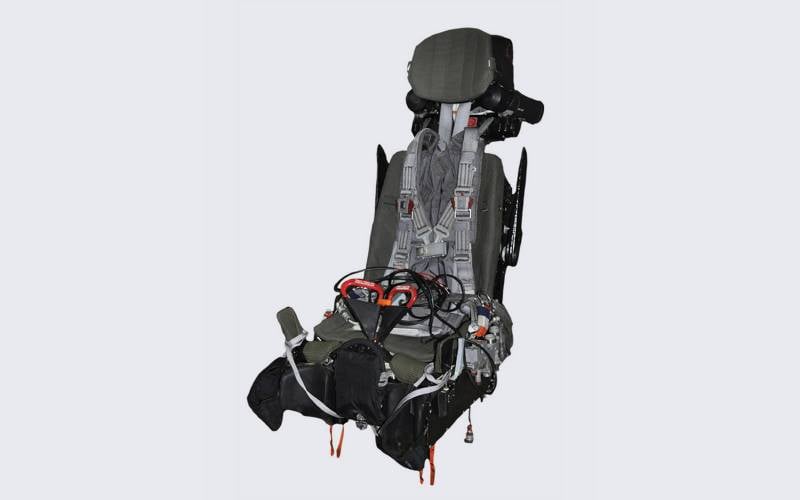 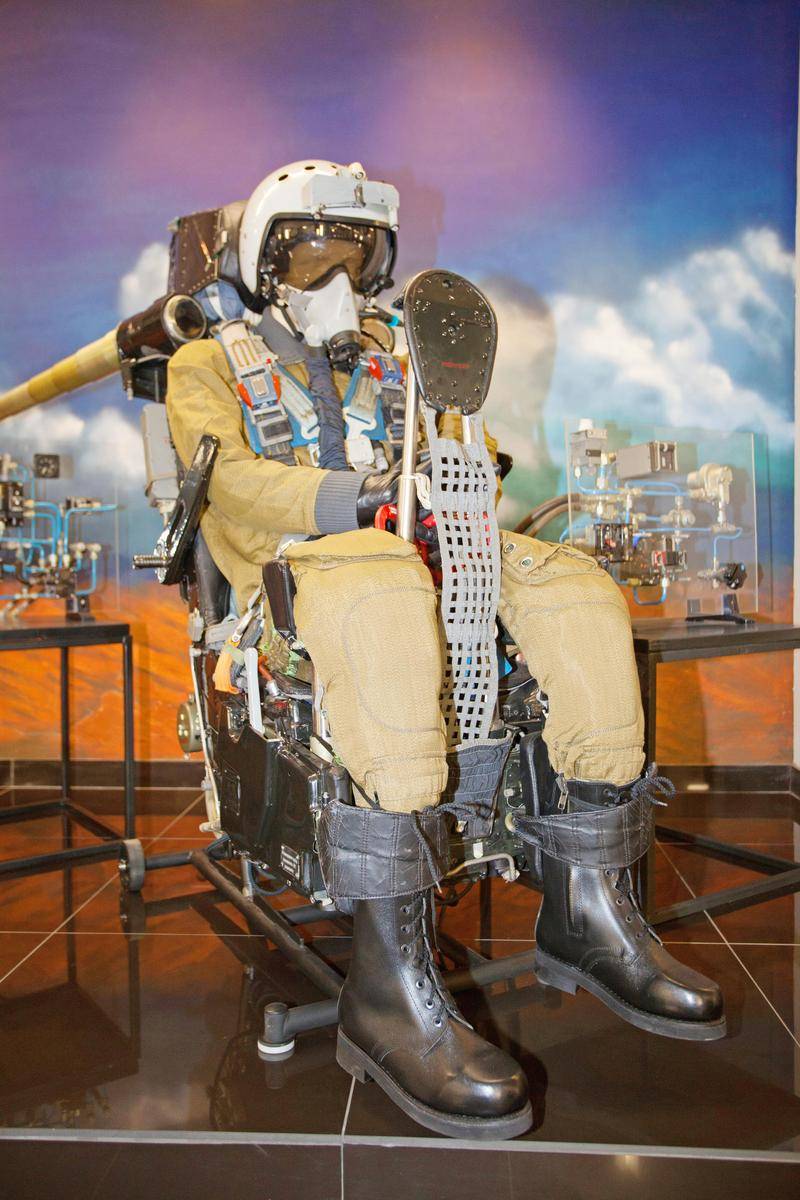 Since 1972, Star Scientific and Production Enterprise is engaged, at first glance, in a paradoxical subject of the development of helicopter crew ejection systems. The basic scheme of an emergency escape from the cockpit of a helicopter was the launch of pilots upwards using a towing rocket engine with preliminary shooting of the carrying blades. As is known, the first was the Ka-50 with the K-37-800 rocket parachute system, which provides ejection in the range from 0 to 4000 meters at speeds up to 350 km / h. For double Ka-52 to the index of the chair added the letter "M". 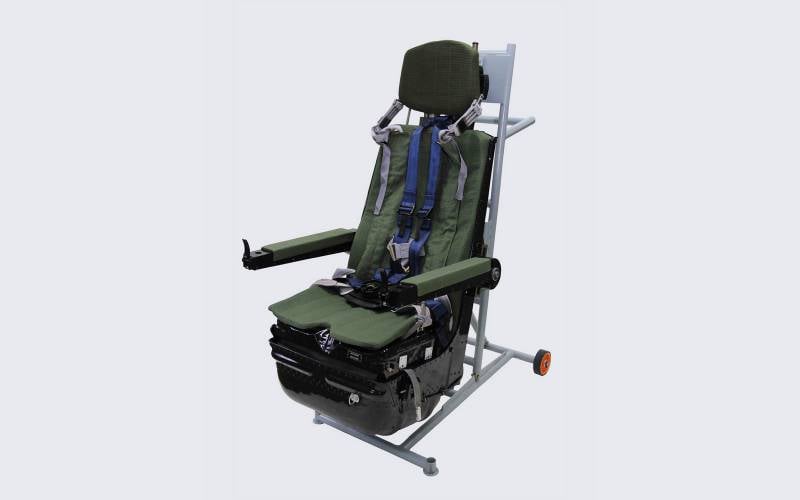 The Mi-28 doesn’t have that luxury, so a light-version is installed in the form of a Pamir cushioning chair, reducing shock loads in the head-pelvis vector in an accident from 50 units to 15-18. The Pamir can also help with a frontal and side impact - the pilot head locking system will reduce the overload to 9-20 units. Requirements of aviation rules and airworthiness standards were initiated at Zvezda SPE development of a shock-absorbing seat AK-2000, used on Ka-62, Mi-38 and Ka-226 rotary-wing machines.

The activity of JSC NPP “Zvezda” named after academician GI Severin is not limited to ejection seats - the company's assets include a “hose-cone” in-flight refueling system, unique equipment for cosmonauts, oxygen systems and pilot protective gear, as well as various parachute systems. But these are the topics of individual stories.