Degeneration of consciousness? Reflections on a given topic

April 23 2018
44
For many years I have been writing and publishing articles on a variety of topics in print and online resources and cannot complain about the inattention of readers. But only article "Degeneration of consciousness?" today can be considered a record holder of my career in the journalistic field. None of my publications have had such a massive response and number of reposts! Thanks to everyone, both friends and opponents, for their interest and indifference! You all give me a lot of impressions and information for consideration. It is a pity that sociologists did not engage in the development of methods for the study of public opinion on the basis of the analysis of reactions to various topics by Internet users. I believe that such an analysis would be much more efficient and reliable than the traditional surveys they used to do. 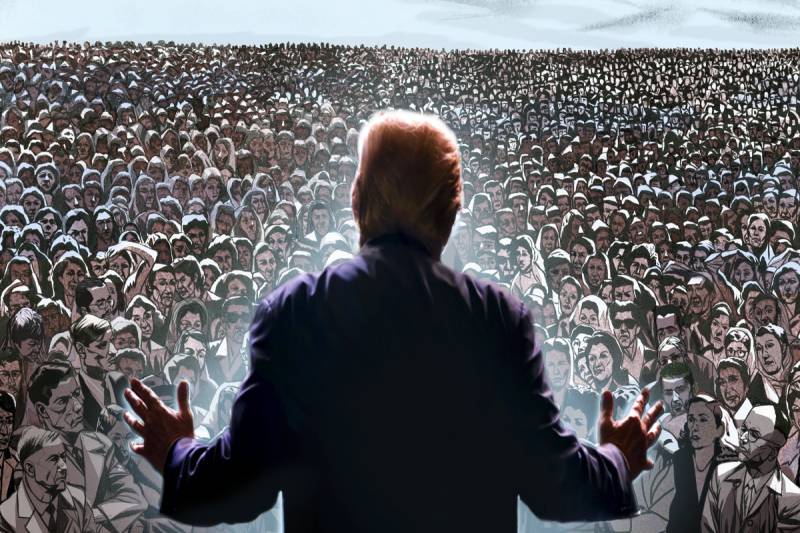 I can not help but notice that once again opponents have caused bewilderment and surprise. On several resources I flew from them accusing that I keep silent about the unique experience of reducing the number of criminal murders that exists and works effectively in Japan. And among the reproaches, I noticed a few nicknames who actively participated in the discussion of my recent article “Civil shortbridge and Japan”where I am discussing this “phenomenon” in detail, expressing my aversion and aversion to the practice of state cooperation and organized crime that has existed in Japan for centuries.

But in this publication, I myself intend to comment on the articles that I recently stumbled upon on the web, because they very precisely resonated with the thoughts that arise from my observations of modern life.

The first article belongs to the Russian author and is called “Who needs large-scale executions in the USA, or Why do maniacs exterminate Americans with such success?”. The meaning of this publication, as I understood it, is that, according to the author, all the American psychopathic shootings of recent years occur and are widely distributed with a rather subtle, but obvious connivance of the ruling financial and political elite of the United States in order to completely compromise its eyes constitutional right to own personal weapons, self-defense with its help, as well as the ability to create armed volunteer formations to resist state power, if it turns into lawless tyranny.

The author draws attention to the fact that the American police could easily have prevented all the high-profile executions of the last time, because each time it later turned out that she knew about all psychopaths in advance and even received signals about the preparation of executions literally just before they began. And in Florida, armed police did not enter the school at all, but simply waited for the arrival of the police special forces. While waiting, the psychopath killed his victims without interference. However, my hand in these policemen will not throw a stone, because they have been entangled with such a web of all sorts of “human rights” laws and instructions, that in these legal traps the devil breaks his leg, and for his own dedication in such situations, policemen can be deprived of Carry on the courts until the criminal punishment. We have a similar thing in Russia too ... How many times have people in the media been telling how the police responded to calls for help in the spirit that when they were crippled or killed, then contact us. The author concludes in his article that the upper ruling stratum of America is simply preparing its people for a sharp decline in their living standards, so to speak, dispossession, and before that wants to deprive them of their will and possibilities for effective resistance. Here and the rod in America executions for executions, purchased media sow panic and hysterics, all kinds of committees and movements to hold protest actions are created, which immediately receive outright excessive financial support just to fool as many people as possible with the requirements to prohibit possession of civilian weapons. They act in a big way, using high psychological and even variety technologies. Here's an example: when President Trump offered to allow volunteer teachers to have personal weapons in schools, they immediately tried to ridicule him with Hochma: and if the next school firing squad staged a kooky teacher, then you need to arm the students? And it was no longer possible to perceive quite logical objections to the risen goggle that the teacher who was gone astray would easily be stopped by his normal teacher. Or what prevents the kooky teachers from shooting schools now that even the guards are unarmed in them? And if all legal weapons are forbidden, then the bandits and maniacs will simply acquire them illegally, nothing will change, it may even get worse.

Well, at present, America is in debt like silk, and these debts are only growing, despite all the indisputable achievements of the United States in the field of economics and science. With the highest level of economic management and labor productivity, this country does not pay for itself, and this happens also because there are huge unproductive expenditures on maintaining a high standard of living for the majority of the population. What are the benefits alone, allowing a huge number of families not to work at all for several generations. So, the “upper comrades” have to think about when the whole bubble will burst, and so that the impoverished people would immediately have neither the will nor the ability to punish their own businessmen by armed means. So the author, in my opinion, logically connected everything in his assumptions. And how surprisingly the article of the American author echoes his publication: "We were deceived by the black woman, and now the 17-year-old boy". In his discourse, the American does not reflect on who benefits from the disarmament of his compatriots for financial and political reasons. But he, by his own common sense and on the basis of indisputable facts, sees how civilian weapons work to save lives and protect the personal dignity of their owners. How arrogantly, hysterically and falsely they try to slander this benefit to those who have been brainwashed by the degeneracy and invested in them the degenerate psychology of total defeatism. He calls these people the liberal leftists. He also gives examples of how they consistently, persistently, persistently and skillfully apply the technologies of psychological persuasion in order to incline the masses, as it were, to voluntary consent to perversely absurd things that are incompatible with a healthy outlook. He cites one example of how for decades, through the preaching of tolerance and its upbringing from school, the LGBT community has achieved for itself a privileged position on almost all levels of social life. From myself I can add that the forms of behavior of LGBT people are completely incompatible with the military spirit, for they are distinguished by psychological instability and a tendency towards hysteria and depression. That is why these individuals in our country (and earlier they tried everywhere) are trying not to take into the army and the police. In our military registration and enlistment offices, they are simply diagnosed with a personality disorder on the basis of sexual desire and sent home. But when LGBT people are legal, open and perceived as normal in the mass public consciousness, they can instill their own behavior in young people, including fruitful opponents of civilian weapons, who are ready not to reckon with any, even obvious, arguments that contradict their position. This is why they (LGBT!) Are beneficial to the rulers who are striving to disarm their citizens.

I thought to myself with a smile: if you put together these authors, ours and the American, to talk about this topic, they will easily find a common language. And as they begin to disassemble the current relations between Russia and America, they will most likely fall to pieces and fight for blood, both fighters are natural by nature ...

There is another interesting article about how England gradually went and what kind of insanity came in the way of arms bans: "The ban on self-defense in Britain", but I will not comment on it. And in general, I would like to know as widely as possible the opinion of those who want to read this material, think over it with me on the principle: one head is good, and the collective mind is smarter. So I wait for responses.

PS I am compelled to note that among the commentators of my articles on various resources appeared stable groups of those who excel in relation to me and my like-minded people in primitive and often obscene attacks, trying to provoke violent arguments with the transition to personalities. Well, and among us, for a long time and not without success, degenerate technology works ...

Author:
Mikhail Goldreer
Articles from this series:
Degeneration of consciousness?