In the footsteps of the crusaders. Part of 2. Triumph of strategic cavalry

April 28 2018
25
On the morning of September 19, after a short, powerful artillery preparation, the infantry of the five divisions of the 21 Army Corps attacked the enemy and by 6.00 captured the first line of defense. Turning to the offensive on the left flank along the coast, the British penetrated into the location of the Turks to a depth of 20 km.


Before entering the cavalry in the breakthrough and during its movement to the objects of impact, English aviation within 4 hours bombed enemy troops and rear. As a result of this bombing, Turkish troops suffered heavy losses.

The cavalry, not expecting to clear the enemy defense, rushes into a breakthrough.

The 5 Cavalry Division, which secured passes through the enemy’s wire and trenches, following the 60 Infantry Division, mounted cavalry, covered with coastal hills, reached the hills at p. Without any particular delay. Nahr El Falik.

The 4 Cavalry Division did not secure access to the wire and the trenches, which resulted in it being delayed much longer - but around 10.00 it crossed the Nahr El Falik and also began to move in the rear of the enemy. Horse artillery joined their divisions.

Aerial reconnaissance systematically informed divisional commanders about troop movements in the rear of the enemy. Due to this circumstance, the English cavalry had the opportunity to suddenly attack (mainly in the equestrian ranks) enemy units moving to meet it. 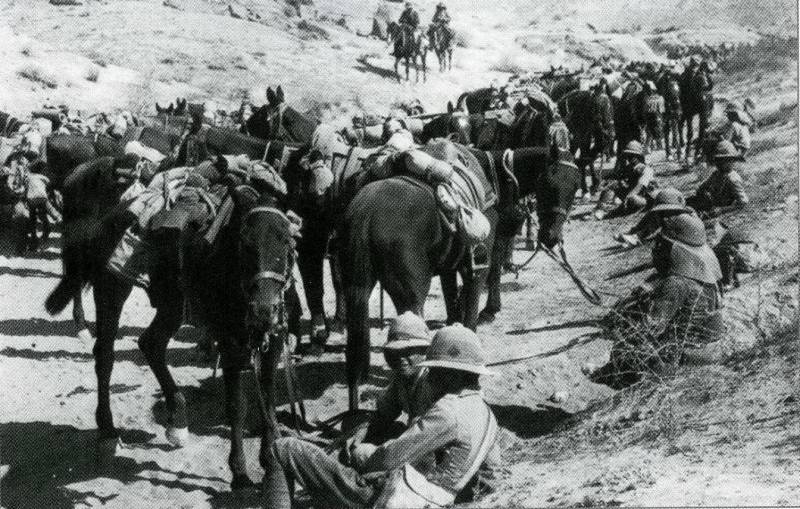 British cavalry in the east. Hussars of the 14 Regiment in the Jebel Hamrin Mountains.

By noon, 19, September, the corps reached the third line of defense and captured it, completing its immediate task. The Turkish cavalry, grouped north of Mukhalis, retreated without a fight.

As a result of the sudden and rapid actions of the British cavalry, the fate of the Turkish-German defense was resolved during the first stage of the offensive. On the way of their movement, only in one of the regions, the cavalry found 90 guns abandoned by the Turkish corps, 1000 carts and 50 vehicles. By the end of the day, the cavalry had captured the important Tul-Karm railway junction.

Up to the big halt, the cavalry made (and in difficult terrain conditions) up to 50 km. After a big halt, in 17.00 - 18.00 4-I and 5-I cavalry divisions resumed movement to the passes through the Samaria Range - to exit into the valley of Ezdraelon. 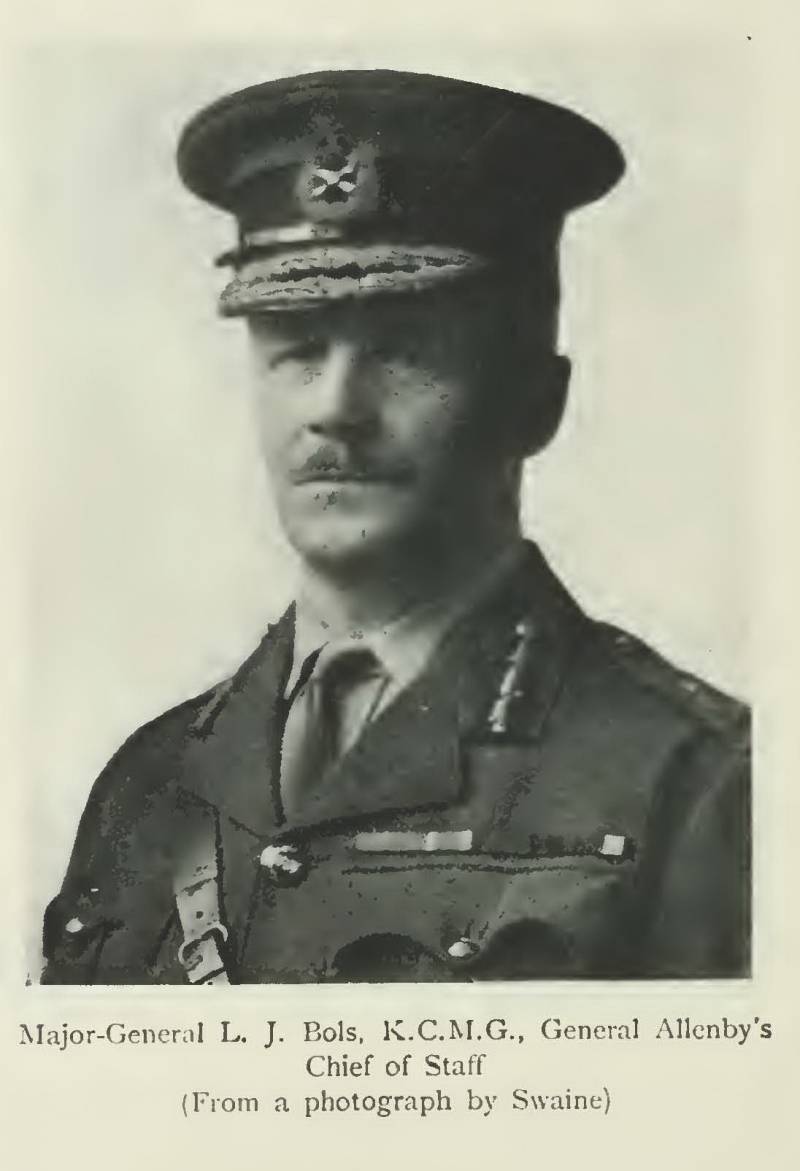 On September 20, the British were successfully developing the offensive - the center of their troops was advancing towards Nabulus, and the left flank, continuing to deliver a bypass attack, went east of Tul Karm, and, taking the front to the east, threatened the Turks with coverage. The cavalry, continuing pursuit in the general direction to the northeast, having made a march in 60 km, goes to the area of ​​Lake Tiberias and intercepts the railway at Beyzan and El-Fulce.

The cavalry acted aggressively and effectively. 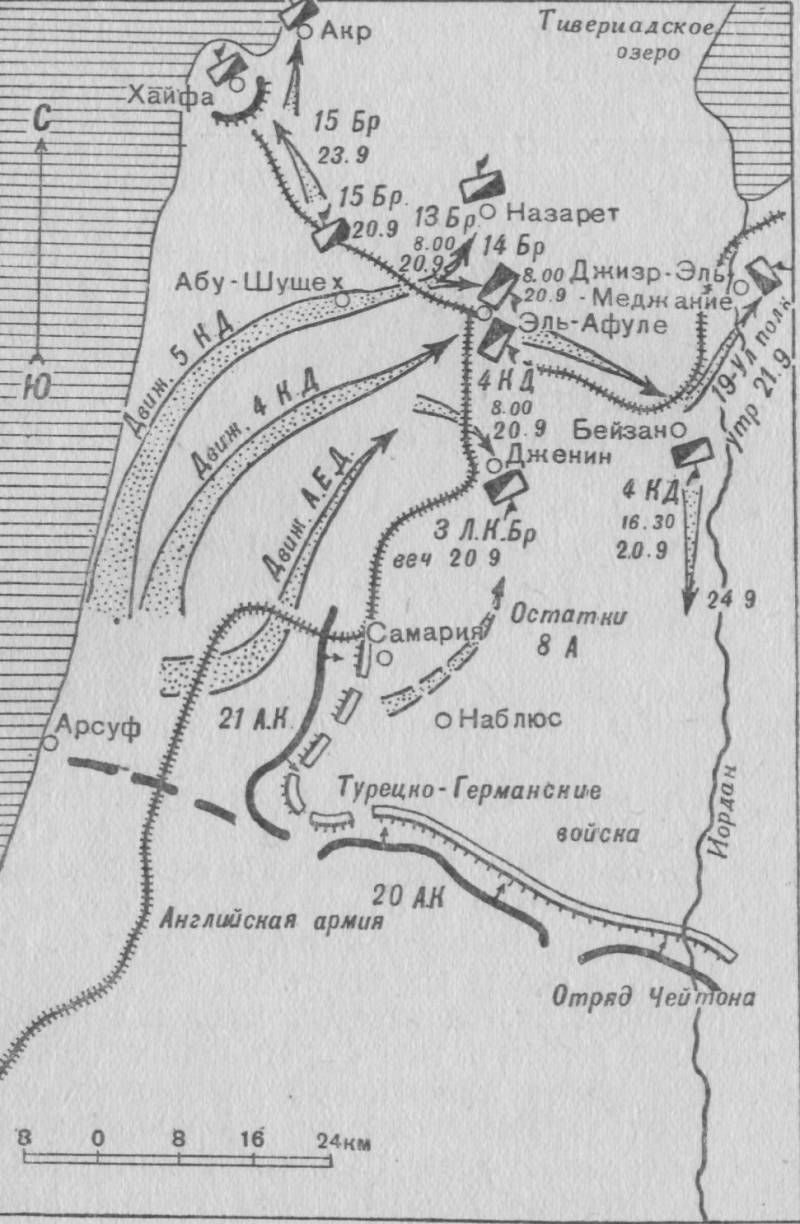 The direction of the cavalry.

As a result of successful actions of the British aviation, which paralyzed the communications system, the local Turkish-German garrisons in most cases did not know anything about the actions of the British cavalry in their rear - and, as a rule, did not even have time to get ready for battle. Even the higher headquarters did not have a clear idea of ​​the situation - for example, commander-in-chief Liman von Sanders, taken aback in Nazareth, barely escaped captivity.

Thus, by the evening of September 20, the British cavalry became the master of the situation in the valley of Ezdraelon - preparing to meet the forces of enemy armies retreating from the south. 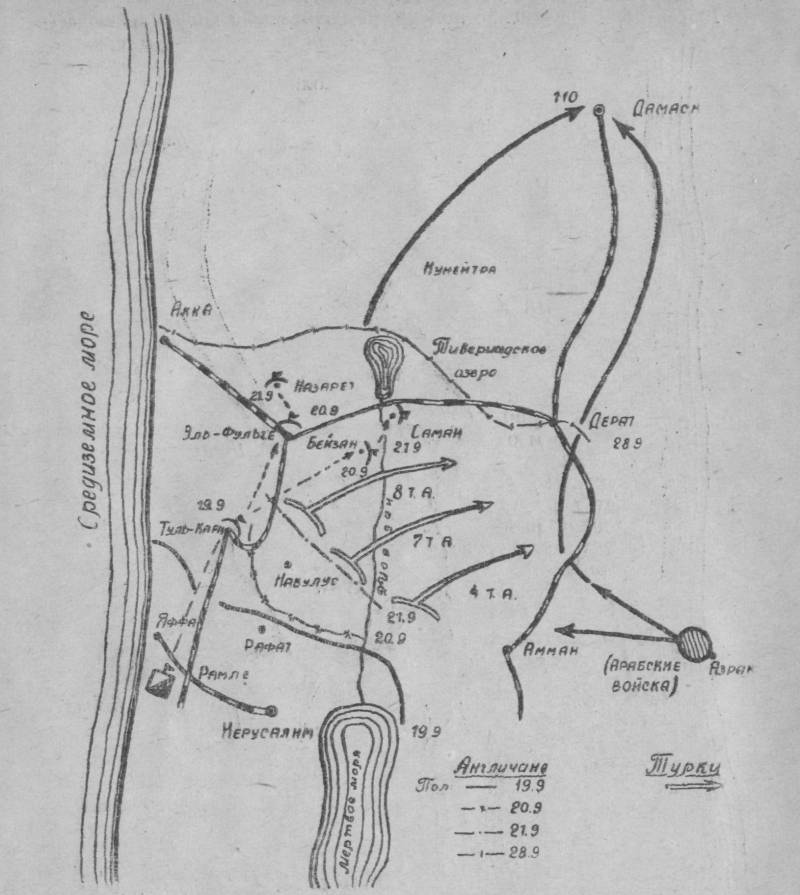 21 September the cavalry takes the ferry across the river. Jordan at Samana and Nazareth, cutting off the Turkish armies to the north, forcing them to change the direction of their retreat to the east, being attacked by Arab troops operating along the Amman-Damascus railway.

As a result of successful actions of cavalry and air fleet at the rear of the enemy, in a three-day battle, E. Allenby surrounded and defeated 3 Turkish armies. The 7th and 8th armies, having lost their full combat readiness, surrendered to the British. Only the miserable remnants of the 4th Army managed to retreat to Damascus.

28 September, the British are free to go to the front of Derat - Lake. Tiberias is Akka, and October 1 is occupied by the capital of Syria, Damascus.

In this operation, the cavalry demonstrated - with what extreme stress it can work even in extremely difficult terrain conditions. The 13 Brigade of the 5 Cavalry Division for 23 hours passed 110 km (of which 40 km - at night along the pack trails) and then led the 5-hour street battle with the enemy infantry. 4-I cavalry division for 34 hours passed with fights around 140 km, overcoming the difficult passes of the Samaria range at night. Its 19 th Uhlan regiment for 2 days passed about 165 km, performing a responsible combat mission. The remaining parts of the hull for 1,5 days passed on mountainous terrain at least 110 km - also with fights.

Thus, as comrade G. I. Sokolov rightly noted, the British’s operation in Palestine in September, 1918, is “almost the only stories World War I exemplified the skillful use of cavalry for the development of a breakthrough. " Kombrig S. S. Flisovskiy writes: “The actions of the English cavalry in Palestine and Syria in September 1918 are the only example during the war 1914 - 1918. the skillful use of cavalry by the high command to develop the success of the breakthrough and an example of great perseverance and active completed actions on the environment to defeat the enemy with cavalry.

The most important task was entrusted to the cavalry - to ensure the encirclement and destruction of the bulk of the enemy's forces by actions from the rear. The depth of penetration of the cavalry in the enemy rear was significant - to 3 - 4 infantry transitions. The task required extreme pressure from the cavalry: its main forces in less than 2 days had to go about 140 km - in order to capture the most important mountain exits before the outgoing enemy units arrived. Thus, the tasks set by the cavalry were based on proper consideration of its most important qualities: mobility, the strength of a massive strike, the effectiveness of moral influence (in case of sudden attacks) - especially in the rear of the enemy.

One of the most important reasons for success was the proper organization of interaction between the cavalry, aircraft and combined-arms units, advancing from the front. Aviation played a particularly important role in ensuring the actions of the cavalry, depriving the enemy of aerial reconnaissance, disorganizing its control, promptly reporting on all movements in its rear, and finally defeating individual columns of the departing enemy. I would like to emphasize the importance of this interaction. And it is imperative that before the introduction of cavalry into a breakthrough, enemy aircraft must be suppressed. So, if the British in the considered Palestinian operation for a long time and stubbornly sought to suppress German aircraft (and because of this, their cavalry did not feel the impact from the air forces of the enemy), then in Lutsk 1916 breakthrough during the movement of the Russian cavalry to the r. Stokhod, when the threat was created of the complete defeat of the Austrians, the Austro-German command threw all their aviation against the Russian cavalry.

Of great importance was the surprise impact of the British - in particular, a surprise for the Turkish-German command of entering into the breakthrough of large forces of cavalry. There is no doubt that under other circumstances the pace of the cavalry movement would be significantly reduced, and on the difficult to pass Samaria range it could meet with serious resistance.

In the operation in question, as well as in the actions in the same time period on the Thessaloniki front (where the cavalry was also successfully used to develop success - the French cavalry detachment with a sudden seizure of Uskuba cut off the only way of the German 11 army withdrawal, forcing it to surrender; about this in a future article), the cavalry, boldly rushed forward - did not look at his infantry. It resolutely went deep into the rear of the enemy's disposition, not caring to maintain a direct connection with the all-military forces advancing from the front. It was the bold and decisive actions of the cavalry that were the reason for the success she achieved in the Palestinian and Thessaloniki operations. In a tactical section, cavalry actions were distinguished by great swiftness. Cavalry units almost everywhere attacked the enemy in a cavalry formation, fighting in dismounted combat formations were fought either against units that retained combat capability, or when the terrain did not allow an attack in equestrian formation. The combat order of the cavalry corps at the initial stage of the operation had a strong second echelon. In the future, the fighting was conducted by brigades and divisions; There was no battle on the scale of the whole corps. This is explained by the broad front of actions in the enemy's rear and the weakness of its departing columns.

In the depth of the location of their armies, the Turkish-German command could not oppose either British or cavalry to the British cavalry. The cavalry corps became the master of the situation in the rear of the enemy - remaining outside of any active influence from the latter. This situation was created due to two circumstances: a) the Turkish-German command did not have aircraft and reserves to counter cavalry (in particular, it did not have strong moving parts in its hands); b) it was not aware of the real events at the front and in the rear of their armies.

There is no doubt that in the conditions of the Palestinian and Thessaloniki fronts there was more operational space for the cavalry than on the European fronts, where solid and to the limit saturated fronts did not allow her to maneuver. However, in the conditions of hostilities in Western Europe there were certain moments when a wide field of activity opened up for cavalry.

Thus, despite the difficulties of a desert-mountain theater of operations (waterlessness, heat, etc.), the cavalry fulfilled the task of quickly pursuing and encircling the enemy, and with great success. The use of cavalry - both in the Palestinian and Amiens operations - had the character of large-scale use of cavalry in an offensive operation - but with varying degrees of success and with a different level of interaction. In the first operation, cavalry acts mainly in cooperation with the air fleet, and in the second - with tanks. The main factors for the success of the cavalry in the operation under consideration were: a) its massaging, b) the correct choice of the direction of actions and objects of attack, c) timely entry into the breakthrough, d) close interaction of the cavalry (in delivering an attack - in time and objects) with aviation. And the airstrikes preceding the introduction of cavalry into the breakthrough became an important guarantee of success. 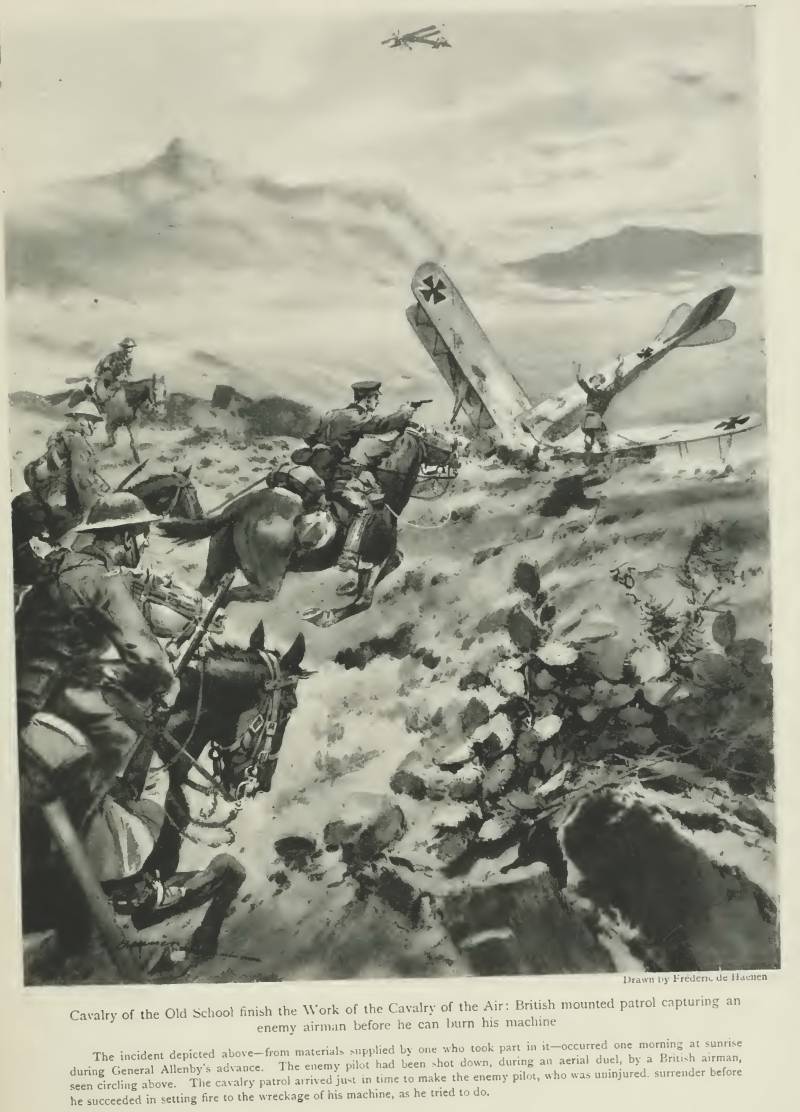 An example of the interaction of cavalrymen and pilots. British horsemen capture the enemy pilot before he managed to burn his car. This episode occurred during the onset of troops E. Allenby. The enemy pilot was shot down during an air duel by a British pilot, and captured by cavalrymen who arrived in time.

Author:
Oleynikov Alexey
Articles from this series:
In the footsteps of the crusaders. Part of 1. Front in the Holy Land