April 24 2018
16
The Stratolaunch system that currently exists for private money in the early 90s of the last century was conceptually described by a group of engineers at the Flight Research Center named after Dryden commissioned by NASA. The air launch was studied in connection with its all-azimuthality, that is, the possibility of launching in any direction. The classic launch of a rocket from ground-based cosmodromes requires spatial maneuvers that use a large part of the fuel stock. A carrier aircraft can easily and naturally change course, go to the most profitable equatorial courses, and take satellites (including dual-use ones) into a geostationary orbit. It is also important to remember about the so-called exclusion zone, which must necessarily be present near the cosmodromes - debris of accelerating rocket stages fall on its territory. The format of such zones can reach several thousand square kilometers with a serious restriction on any economic activity in their areas. 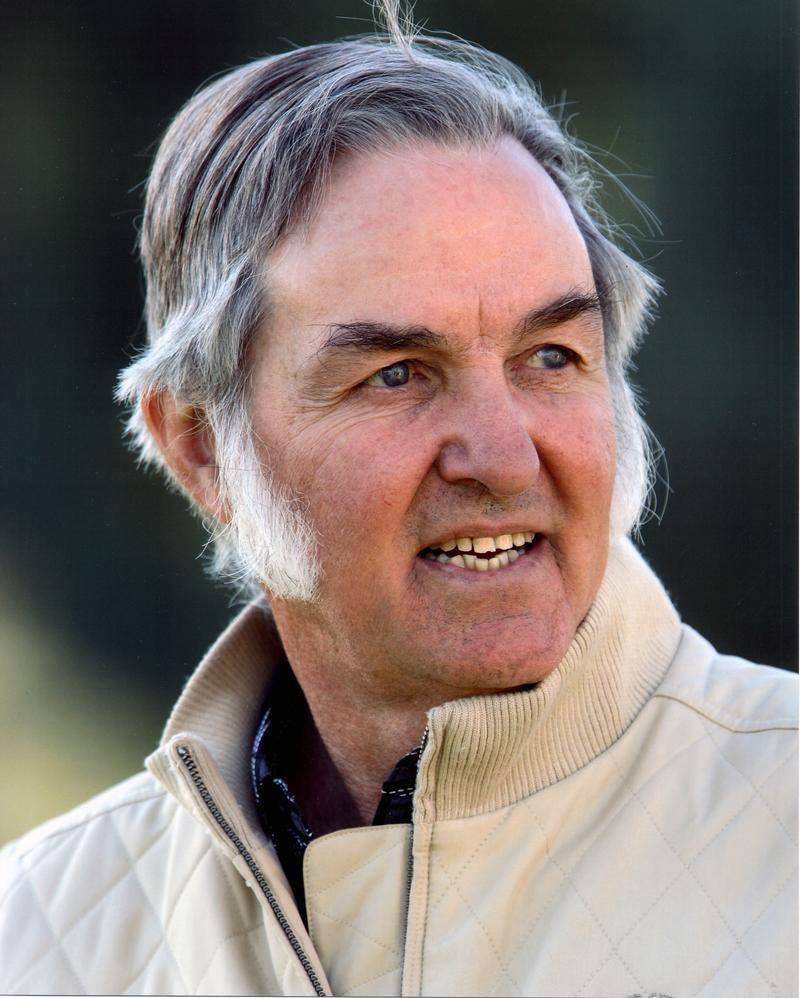 As always, in stories nontrivial ideas is an active person, put a lot of strength to make it reality. Such for the project Stratolaunch was aircraft designer Bert Rutan, who proposed to abandon the flawed, in his opinion, idea to remake the existing flying "super-weights" for an air launch. And there were a lot of projects - An-225 with a maximum take-off mass of 640 tons offered to equip 250-ton rocket, which, in turn, delivered to orbit no more than 12 tons of payload. But commercial calculations have shown that it is necessary to throw at least 20-25 tons of net weight into orbit for payback, and in this case the weight of the aircraft carrier will exceed 1000 tons. And everything would be fine - there are no theoretical difficulties for assembling such a machine, but where will such a giant sit down? Creating one or two aerodrome for aircraft of this class actually devalues ​​all the economic bonuses of the air launch. Rutan also proposed the Grasshopper Grasshopper subsonic carrier aircraft project, which became the prototype embodied in steel and composites, Scaled Composites Model 351 Roc. The car was a two-body with four-bearing chassis and was intended to launch the launch vehicle from heights exceeding 12 km. To some extent, the developments were realized in the tourist suborbital station SpaceShipTwo. In 2010, the financial potential of investor Paul Allen, who created the project Stratolaunch Systems, joined the talent of Bert Rutan. The guys were familiar before that - the SpaceShipOne rocket glider, capable of climbing 100 km and more, their hands. Developed a six-engine miracle invited top-level specialists - engineers of the project Space Shuttle, as well as pilots reconnaissance and, in combination, the fastest aircraft SR-71. During the year, we managed to create a triune project - a flying launch platform, a middle class launch vehicle and ground infrastructure, that is, GDP, a hangar, and so on. The most interesting thing is that the ideological generator Bert Rutan stopped practicing his brainchild from April 2011, when he left his company Scaled Composites, which designed the Ruh Bird. 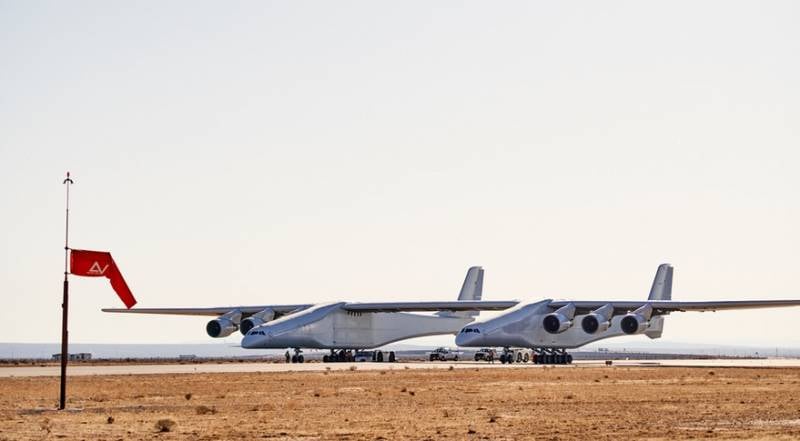 Initially, the “bird” was supposed to weigh about 544 tons, but in the process of development and assembly, this value increased to 590. Omnipresent Ilon Musk, without whom, it seems, not a single world hi-tech-kipish passes, oversaw the development of a launch vehicle based on his own Falcon 9. The Falcon 9 launch mass passed over 400 tons, the projected aircraft was not able to tear it off the ground, therefore the “nine” was cut to the Shorty version “shorty”. The rocket was smaller, lighter (up to 250 tons) and had to fit in the intersecting space of the Scaled Composites Model 351. The project assumed the launch of tons of payload into orbit as much as 6,12, which even then raised questions about the appropriateness of this undertaking. But the work was going on - the organizers rented an 8,1 ha area in the California Mojave Desert, where, starting in October, 2012 built a plant for the production of composite structures and a hangar to assemble the future aircraft. 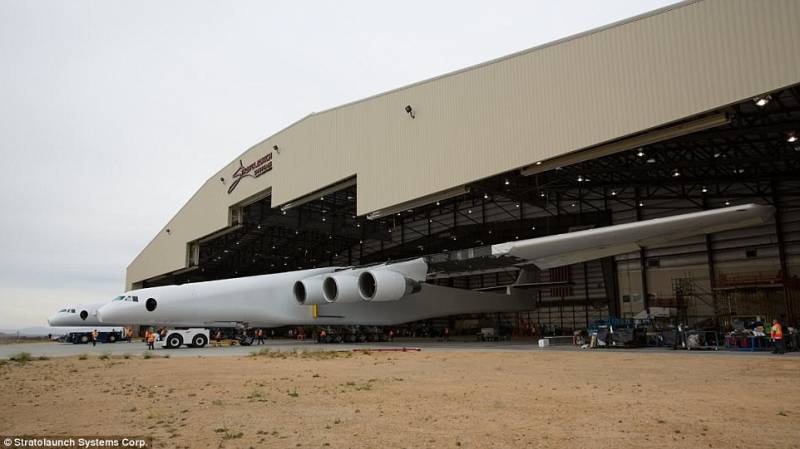 Large aircraft have large areas: the composite workshop occupies 8100 square meters, and the hangar is already 8600. The take-off betonka, however, is compact enough for an aircraft of similar dimensions — only 3800 meters.

Model 351 is in many ways a “hodgepodge” of aviation-proven solutions, so Boeing 747-400 shared the engine, chassis, wing mechanization control and on-board equipment. Moreover, for the project, Paul Allen bought two used (!) Aircraft from United Airlines, assembled back in 1997 year. The carrier aircraft of the Stratolaunch Systems system is designed according to the two-fuselage high-wing scheme with a straight wing of high elongation and horizontal tail in the rear fuselage. In the central part of the wing, between the fuselages, there is a suspension system and a rocket launch vehicle weighing up to 250 tons. The main structural material of the airframe is carbon fiber, which has become the hallmark of the Scaled Composites office. 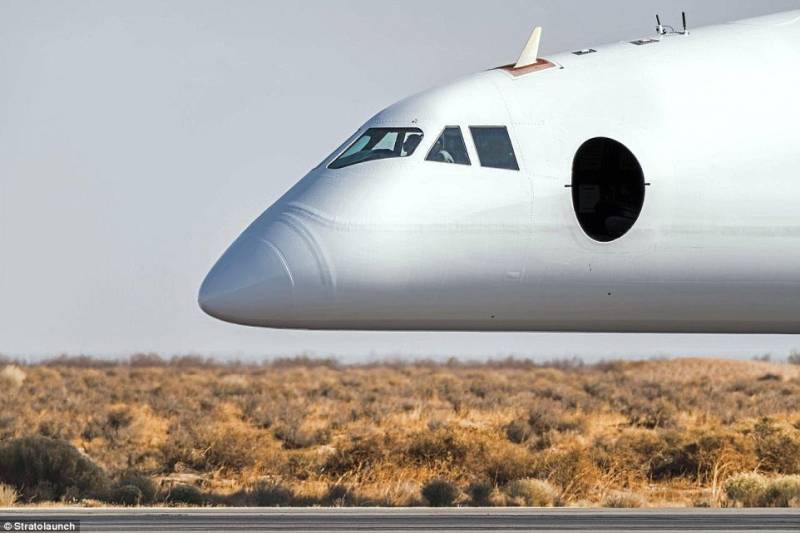 One of the two cockpits. Source: dailymail.co.uk

28 wheels of the aircraft landing gear allow it to be rather gentle on the takeoff concrete with a weight of 590 tons. Hanging under the wing consoles are six good old PW4056 from Pratt & Whitney, each generating 25,7 tons of thrust. The wingspan makes the "Roc" the best in aviation stories - both the An-225 Mriya (88,4 m), the A380 (79,8 m), and even the immortal creation of Howard Hughes H-4 Hercules with its gigantic 97,5 meters lose. But in the maximum take-off weight, the two-fuselage noticeably loses the Mriyé with its 640 tons, but firmly holds the second line in this indicator in the world. Engineers plan the ability of the aircraft to accelerate to 850 km / h and launch the launch vehicle at a range of up to 2200 from the parent airfield. An important design decision was the fact of the possibility of using the Model 351 as a transport (read, military transport) aircraft in order to recapture the costs of development and operation. For this, the missile hitch-uncoupling unit is dismantled and the aircraft is ready for the transportation of oversized items, which, for example, cannot fit in the An-124 Ruslan. A short history of Model 351 has the following chronology: 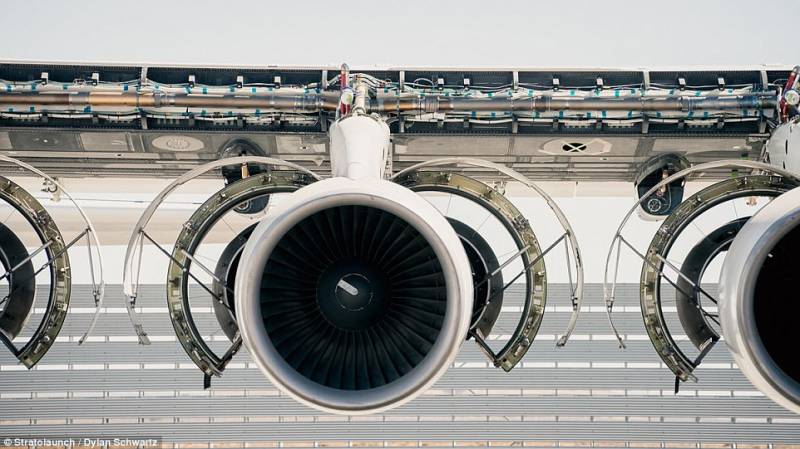 Development engineers are optimistic that in the current "Bird Ruch" will rise on the wing, and in the year 2019 will launch the first rocket into space. True, there is nothing to start yet - SpaceX Mask released their project back in 2012, due to the lack of resources for a secondary project for them. And the redesign of Falcon 9 constructs for Stratolaunch Systems was already too fundamental. The search for new rocket builders led Paul Allen to OSC, which offered a solid-fuel Pegasus II, sending a tonne of useful mass to Earth orbit 6,1. But by the year 2014 Pegasus was abandoned in favor of the new product - a three-stage Thunderbolt rocket equipped with two solid-fuel and one liquid (hydrogen + oxygen) engines. By September, 2014, the US office of Sierra Nevada, spoke about the development of the Dream Chaser spaceplane, adapted for the Stratolaunch system. Such a spaceplane will send up to three astronauts into space and safely return them to the ground. Finally, the system can send spacecraft and similar objects in a suborbital mode to any point on the globe in just 1,5-2 hours. Feel the ambiguity of the “peaceful” mission of Stratolaunch Systems and Sierra Nevada? 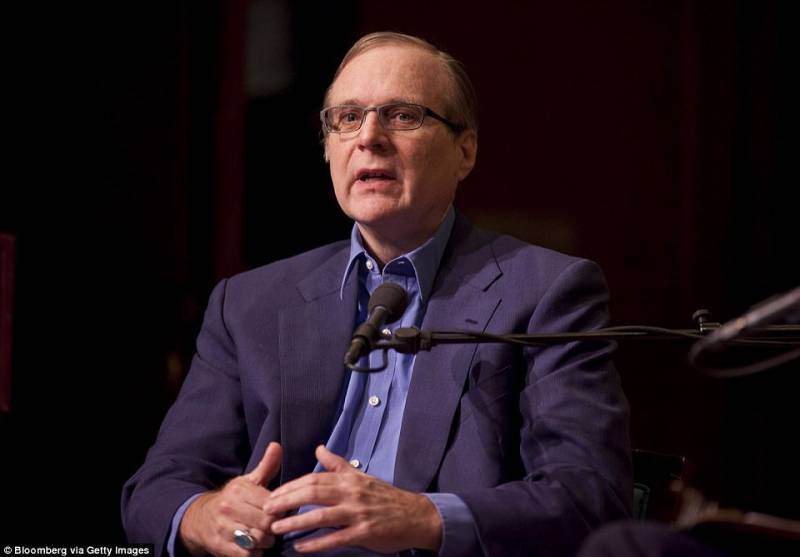 Paul Allen, chief financier of the Stratolaunch Systems project, trying to go down in the history of the global aviation industry. Source: dailymail.co.uk

Eventually news about the last two projects, they quietly left the information field, and Paul Allen got “sick” with the new idea of ​​using his brainchild. Immediately, three Pegasys XL light rockets are proposed to be hung under the Model 351 wing, however the market for services of such “kids” is very narrow - no more than one launch per year. Is it worth for the sake of such a monster? So the engineers were able to persuade the Stratolaunch Systems management to develop ... their own launch vehicle. Before 1 June 2018, the company plans to test its first rocket engines at the Stennis Space Center, the first 5,1 million dollars have already been allocated for this. As a result, Paul Allen was faced with the need to develop the entire air launch complex from scratch — from GDP to a launch vehicle. And it seems that it will not work out with “spare” spare parts here.