April 25 2018
8
Time erases everything, if it does not have time physically, then it carefully heals from the memory itself. Sometimes even very memorable places, living artifacts of the epoch turn into a little thing forgotten on the mezzanine - and it is a pity to throw it away, and to erase the dust of dust. So slowly, the expensive, close, important thing goes into oblivion ... It happened with the command of the NBM and the 18 th army.


In 1942, the war was rapidly approaching Novorossiysk, however, the city was already pretty battered by bombing. The Novorossiysk naval base gained an increasingly important status, became a place of attraction for retreating troops and some forces fleet. SLCM has already provided support for the besieged garrisons of Odessa and Sevastopol. It was in these desperate days that it was decided to equip an underground command post, which was initially considered a reserve.

The place for the command post was chosen in the 9-th kilometer of the Sukhum highway. The works were carried out by the engineering department of the Black Sea Fleet. Given the terrain and nature of the rocks, it was decided to use what nature itself has created. In the rock, which abruptly broke off towards the sea, tunnels and halls sufficiently large for underground shelter were cut through. The walls and floor were finished with excellent local Portland cement. KP was located in such a way that the rock mass on one side with its whole ridge was turned towards Novorossiysk, i.e. towards the advancing Nazi units. On the other hand, the entrances to the command post, located on a small gorge, were located (in our area such places are called a gap). At the end of August 1942, all work was completed. 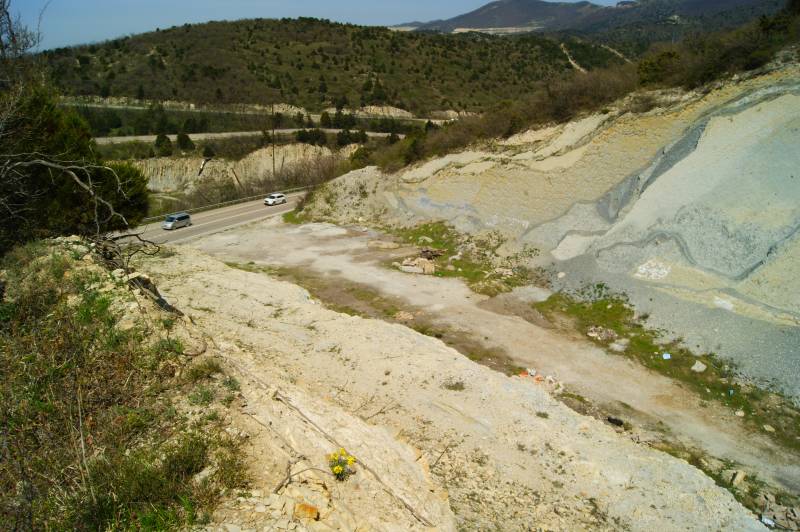 This "clearing" in the mountainous soil, done for laying a new highway, ideally demonstrates the heavy nature of the local soil. More precisely, the absence of this soil is only a thin top layer. This is an illustration of the hard work that engineers have done.

Already in September, 1942 of the year, a command post of the 47 Army headquarters, headed by Deputy Commander Anatoly Petrakovsky, moved to command the troops. Later, the commander of the 47 army and the Novorossiysk defensive area, Andrei Antonovich Grechko, and rear admiral Sergey Georgievich Gorshkov, left for the command post, so to speak, for temporary residence.

During the preparation of the landing on the future “Malaya Zemlya”, the NVB operational group led by the captain of the 2 rank, Arkady Vladimirovich Sverdlov, arrived at KP. This group carried out part of the control, as well as the landing coordination, as being the closest to the landing area and the front itself.

At the end of February, 1943, the command of the troops engaged in fighting in Malaya Zemlya, as well as at the cement plants, was assigned to the headquarters of the 18 Army. Accordingly, officers of the 9 Army arrived at the command post of the 18 kilometer. As a result, the leadership of the decisive assault of Novorossiysk was carried out from this command post.

Unfortunately, there are very few detailed information about KP and they are scattered. And this is despite the fact that earlier this building was part of the complex of objects of the Novorossiysk Museum, and perhaps it is included now. Whether the initial secrecy influenced, or the time of oblivion of this object, but even its location is not easy to find.

Therefore, the author threw a cry among comrades of a dozen timid and without claustrophobia. Soon, such a friend was found, and we drove to the place, on the 9-th kilometer. First, it was decided to examine the slopes of the mountains in the 9-th kilometer, which were supposed to hide at least some traces of the PDO system. The search was short lived.

At the very tip of one of the small ridges, we discovered a small but massive DOT, which, it is true, served as an observation point and one of the firing points of the antiamphibious defense. 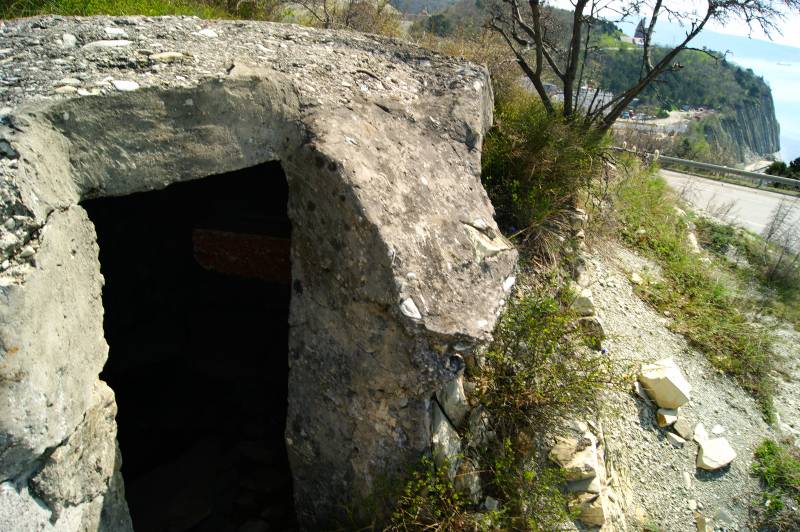 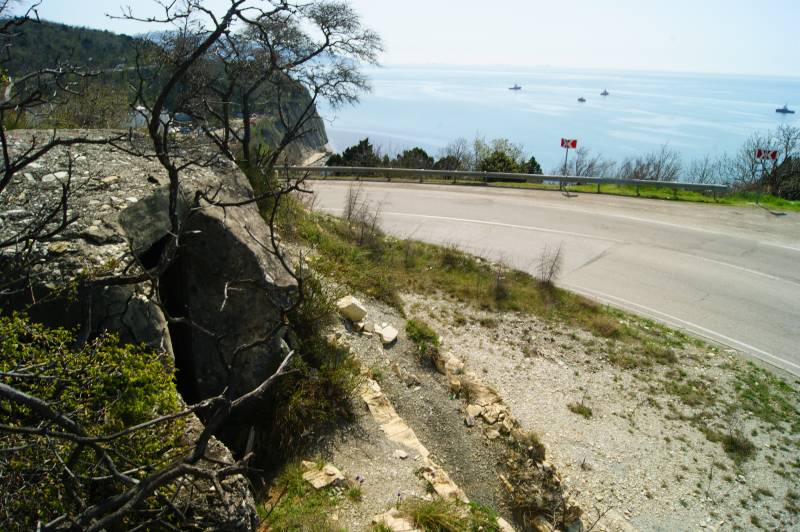 The internal space was extremely tight. The loopholes housed several concrete pedestals - for optics or machine-gun armament. It seemed that during the construction of the highway, part of the object was simply demolished. 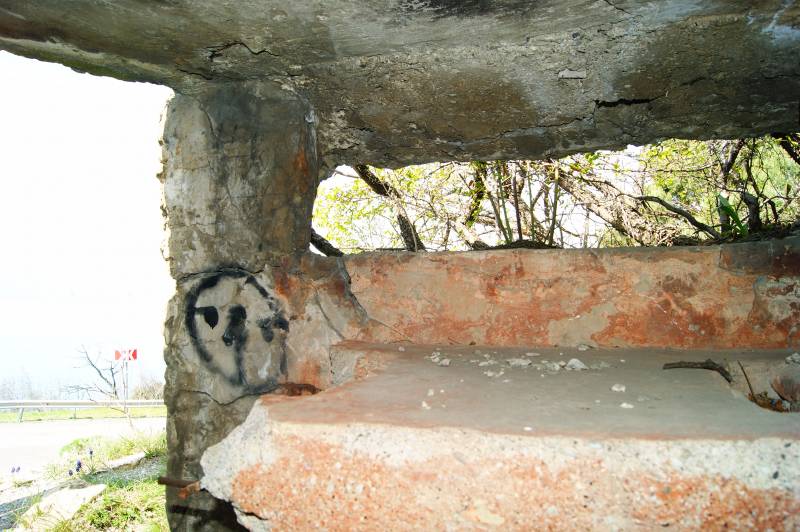 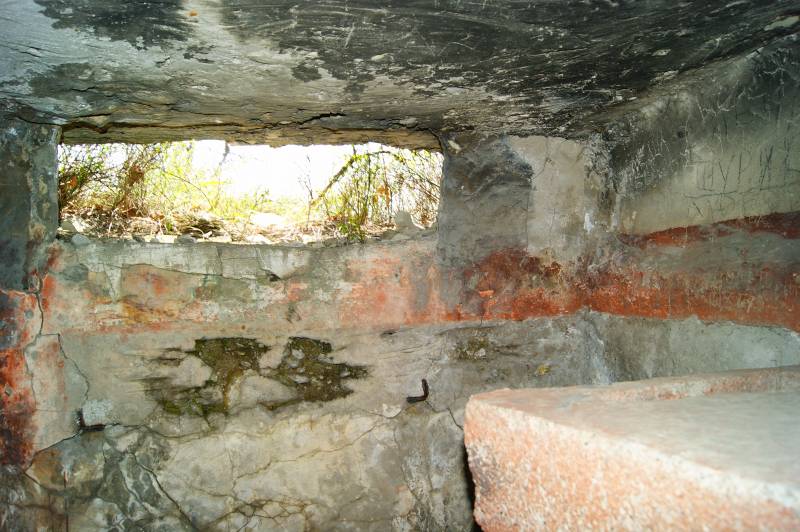 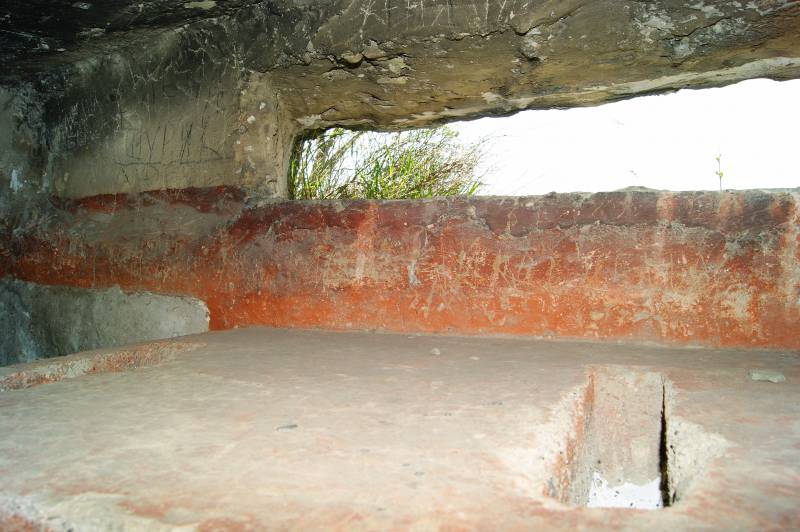 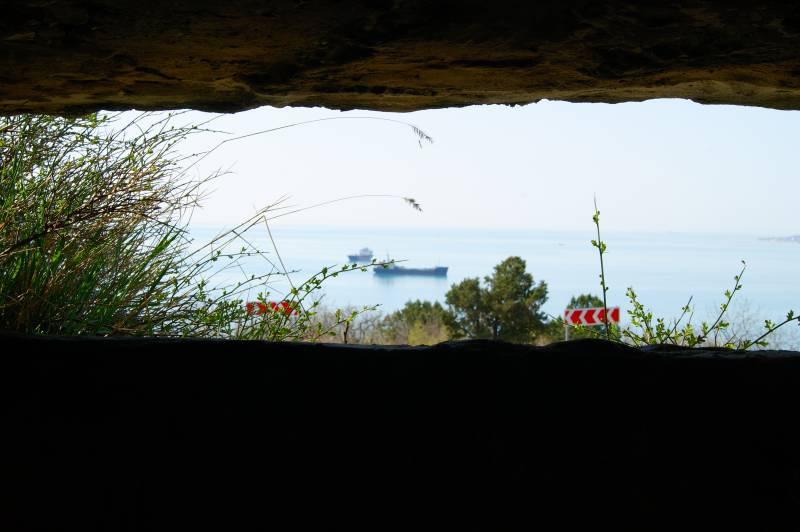 Above this structure, in the thickets of juniper, oak and hold-up trees, many craters were found, some of which resembled trenches. 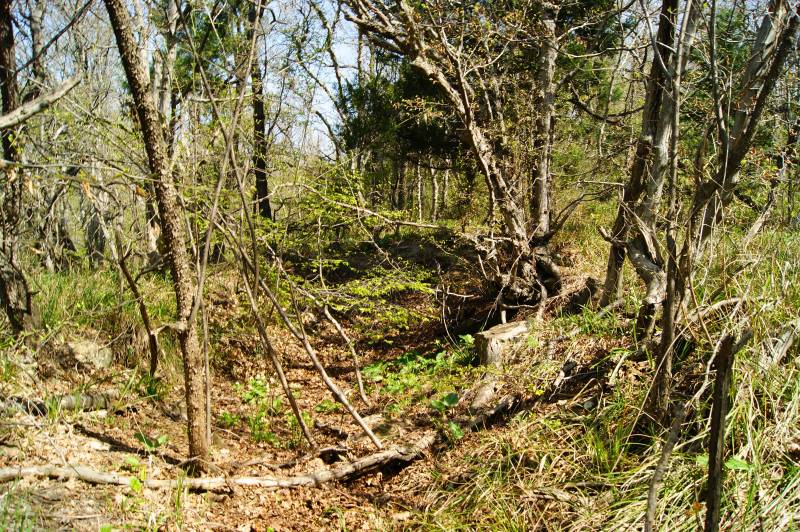 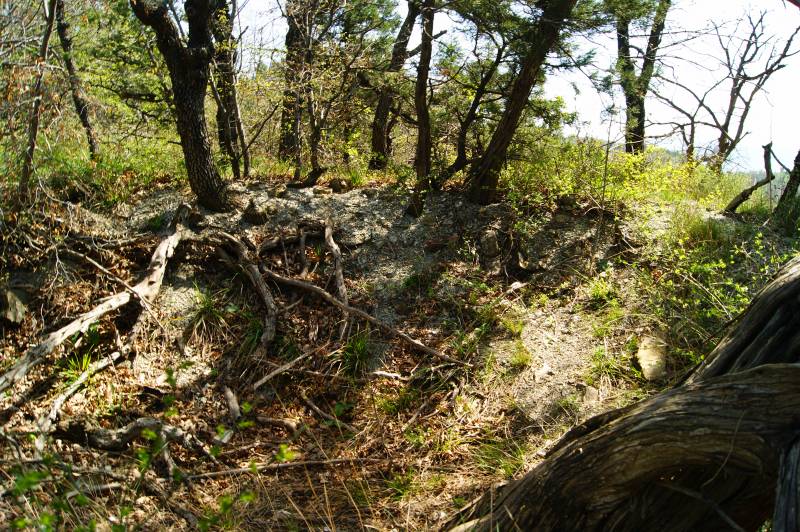 Also found were some concrete "domes" that went outside. Inside, everything was wildly littered, so to investigate them was not possible. 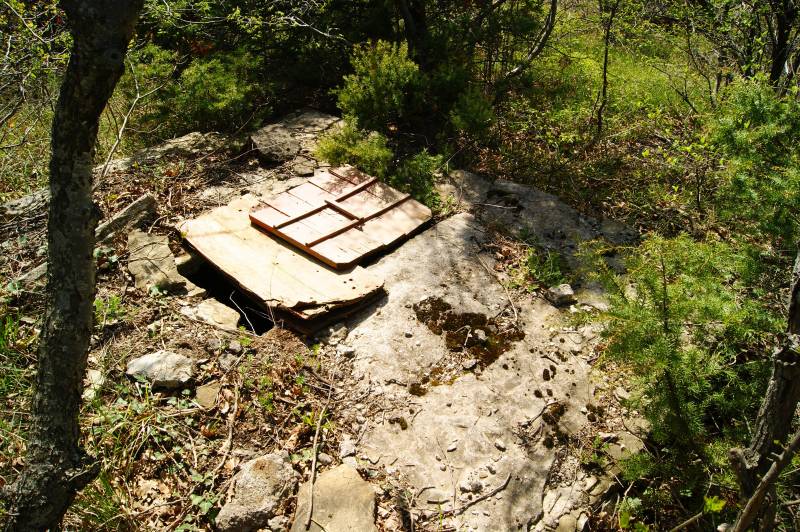 Well, let's start the search for the KP itself. The terrain here is a continuous mountain folds, ridges and gorges, going down to the sea. From here and some annoying serpentine highway. So, in one of the gorges and is KP. We examined all four small gorges. Sometimes purely visually from the nearest mountain, because in one there is a branch of the Krasnodar University of the Ministry of Internal Affairs, and in the other there is a reservoir that does not allow placing there, whatever it is.

Finally, we chose the right ravine, into which a somewhat broken asphalt road led. Moreover, if you are not ready to turn the car in abruptly, waiting for the road that has jumped out of the forest greenery, then you will surely miss it.

The impression of the village lying in the valley was strange. Near the fashionable houses, sometimes going up to four floors, were dilapidated buildings of almost the pre-war period. “Well-fed”, judging by the buildings, local homeowners did not pay any attention either to the road leading to their homes, nor to the collapsing ruins in which to shoot a horror film, or to the garbage lying under their feet. 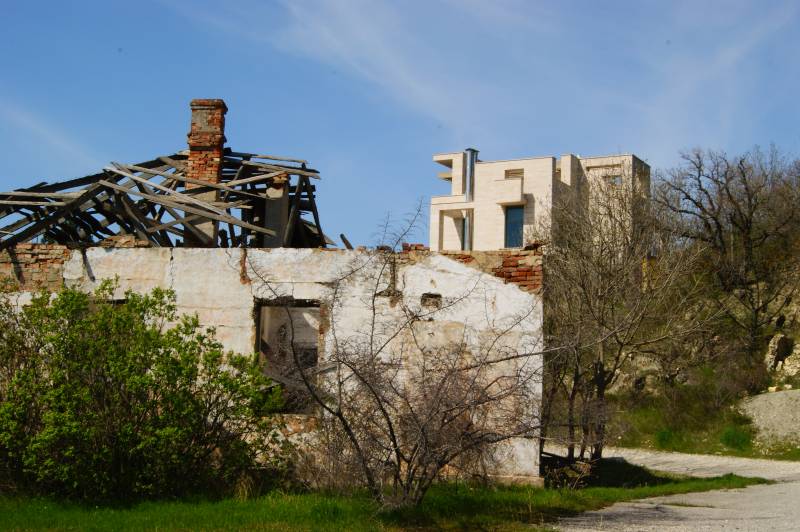 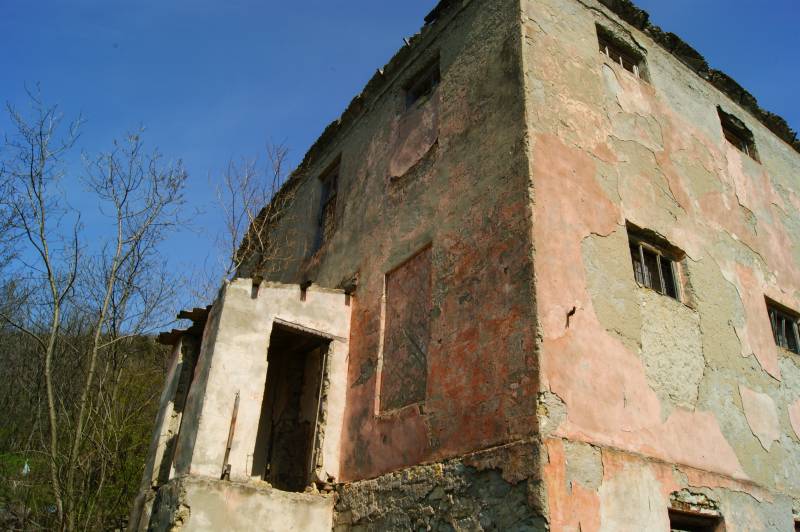 I have always noticed this strange detail - the more “plump” home ownership is, the more debris is right behind the fence. Apparently, no one wanted to spend a penny or a minute of time behind the fence. For example, the plate gathered from shit and sticks, saying “not to signal, not to disturb the guests” looked extremely indicative. In fact, the place, despite the road and rubbish, is very picturesque and quiet. But why didn't these lovers of silence from expensive villas install a decent ad, but hang a shabby piece of plywood with oblique letters painted with red paint on a tree? 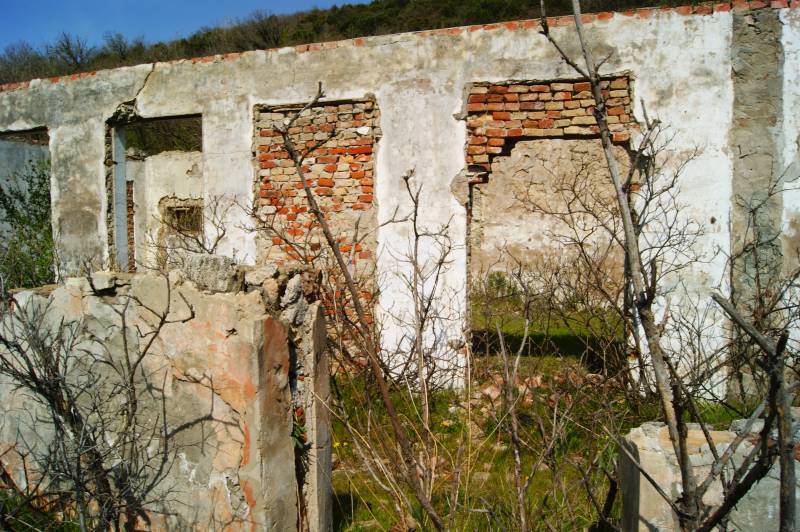 Climbing along the local urban ruins, we headed to the site with a characteristic rocky slice, which was thrown from the highway. 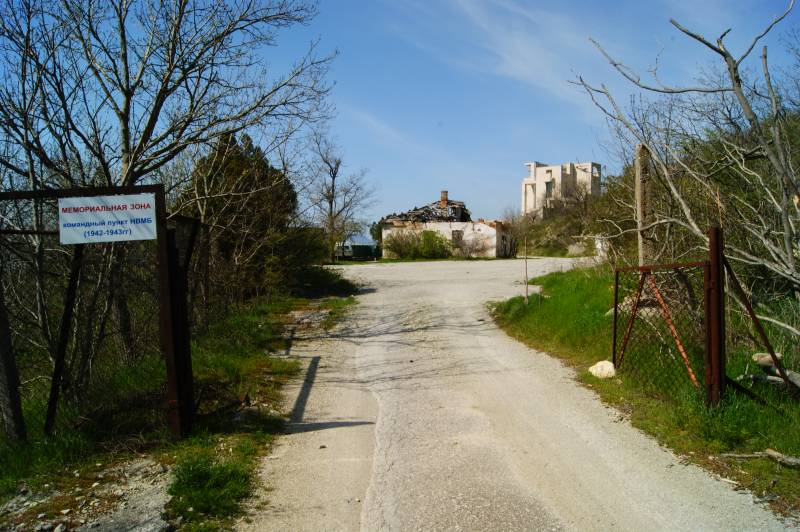 Before the venue, we were met by a promising relatively new sign, as well as a completely unproductive, broken, rusted gate. 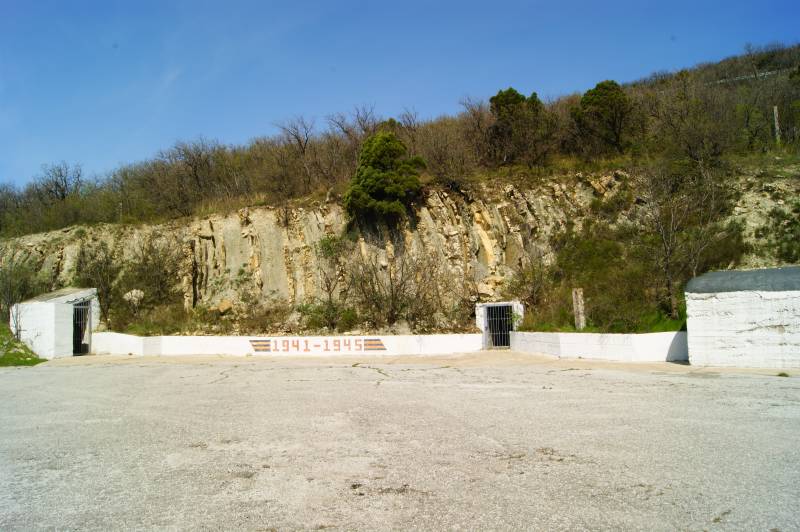 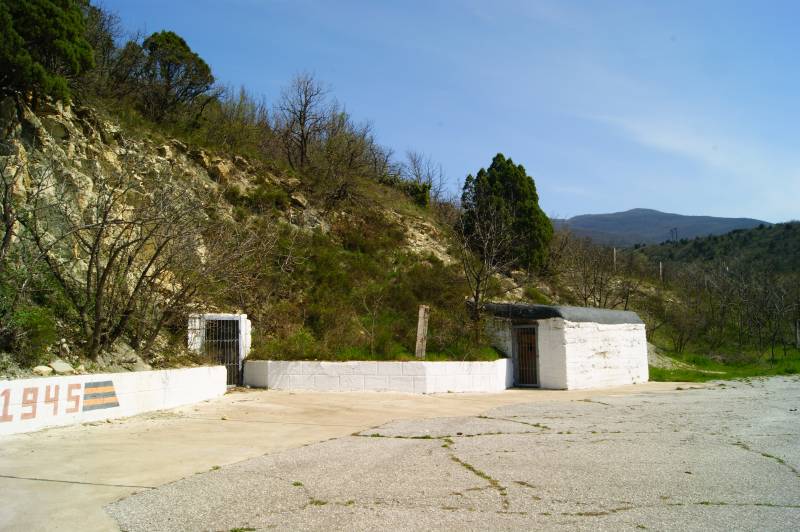 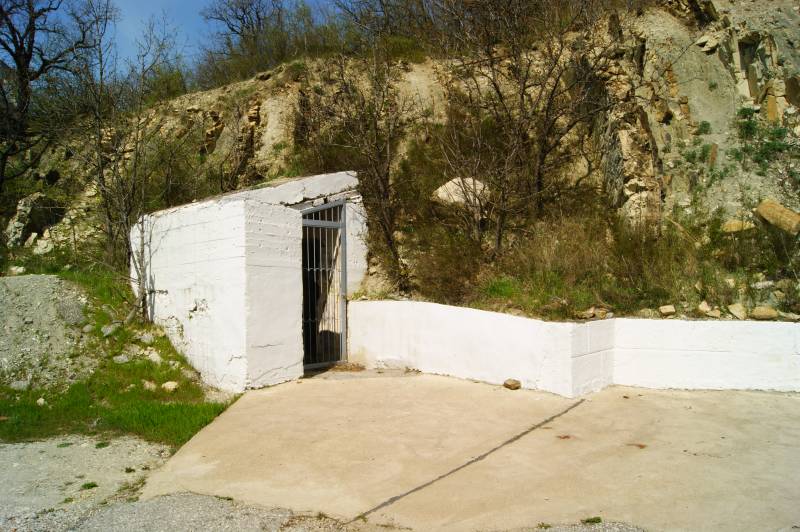 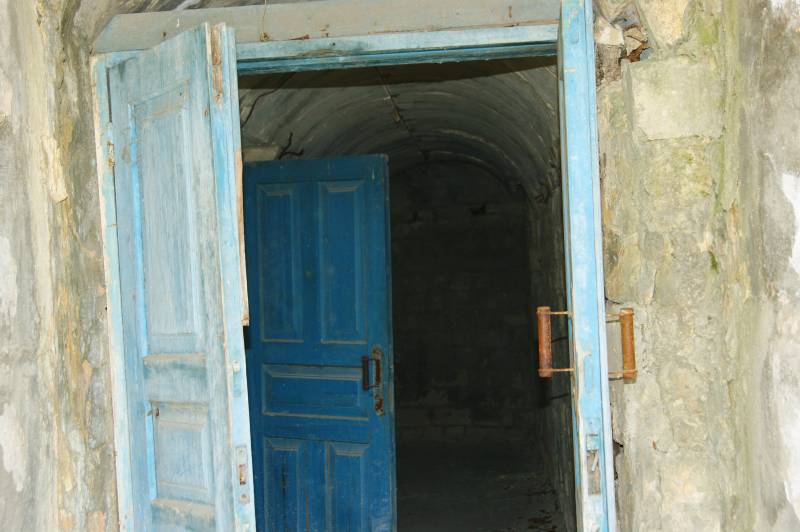 Enter the rock (in the literal sense of the word) in the second part.