April 20 2018
24
Even before the provocation in the Syrian city of Duma, many noted the connection between the accusation of Russia of Skripale’s poisoning with events occurring in the Middle East, namely: Moscow was tried to be discredited, accused of using chemical weapons before organizing a “chemical incident” on Syrian territory. Thus, the task was set to reduce Russian influence in the Syrian issue. Unfortunately, this assumption was confirmed. A month passed after the mysterious incident in Salisbury - and the “chemical” information bomb in Syria exploded. 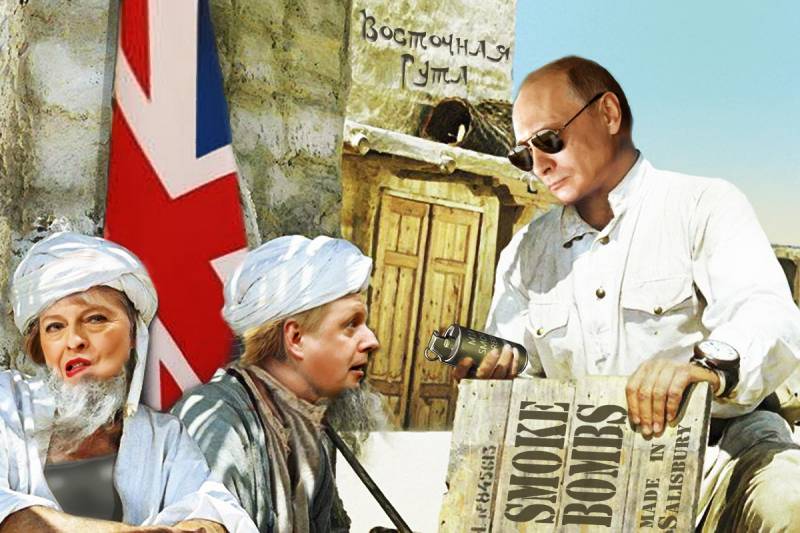 Now it turns out an interesting detail: on the territory of Eastern Guta, which, despite all the efforts of the West, was nevertheless trimmed from terrorists, evidence was found of the participation of some countries in provocations. They found containers with chlorine from Germany, as well as smoke bombs - that’s a mystery! - from Salisbury.

The official representative of the Ministry of Foreign Affairs of the Russian Federation, Maria Zakharova, during her briefing, said in this connection:

“It’s even difficult to comment on this fact in some way, so frightening and undermining the faith in the humanity of individual states. Of course, we are not talking about whole states, but about those politicians and leaders who give such orders and take similar decisions. ”

The fact that the territories liberated from the militants found handicraft workshops, where the "opposition" worked with various toxic substances, Russia has long spoken. But the West did not want to see this threat even. Moreover, a “smoke screen” of lies was created there to discredit Russia with the help of the “Skripal case”.

And suddenly such a coincidence: the smoke bombs found in the Eastern Gute liberated from the terrorists are also from Salisbury. They could be used during the filming of a provocation. Directly not the city, and the factory for the production of smoke screens!

And real chlorine existed, delivered to the militants from Germany. It is not difficult to assume that the provocation was prepared more thoroughly. It could be much more dangerous if the terrorists used this chlorine in reality. But the too rapid advance of the Syrian army and the stampede of members of the gangs, who were forced to agree to evacuation in order to keep their skin elementary, disrupted provocative plans. For the time being.

"Torn" in the end. In the last cleaned-up city of Eastern Guta. Where there were originally the most radical and implacable militants. And at that very moment when, it would seem, the issue was resolved with them. Let us recall how events developed: first, the terrorists from the Duma agreed to evacuate by buses to Jarablus. Then part of the militants opposed the evacuation. Implementation of the agreement because of this was suspended. This delay was the key to organizing the provocation.

The terrorists had the last chance to organize it. There was little time. The militants have lost their laboratories and funds supplied by the West. These funds, prepared for the organization of the "incident", were in the liberated territories.

Therefore, blinded "chemical attack" of what it was. From the very beginning she came out crooked, sewn with white threads. But in the end, for the anti-Syrian propaganda and the subsequent attacks, such an “incident” came down.

Now interesting details are beginning to emerge. One of the boys, Hassan Diab, admitted exactly how the shooting of the mythical Himataki was conducted. The hungry, exhausted people who were taken hostage by the militants were ordered to leave the bomb shelter and run to the hospital in Duma. There they began to pour water. The testimony of the boy was confirmed by his father.

Russia wants to show this shot to all members of the UN Security Council. Is there any chance that some of them “see” the plot and “hear” the boy and his father? Alas, this chance is minimal. Rather, these parties will continue to lie and dodge — just like the British authorities when unpleasant facts emerge in the “Skripal case”.

You can, however, compare how Russia behaves, accused of using chemical weapons, and what London is doing, which, in turn, is accused by Moscow of falsifying the poisoning of Sergei and Yulia Skripale.

- they did not allow the staff of the Russian Embassy to Sergey and Yulia Skripaly;
- destroyed the domestic animals that lived in the house of Skrypal (if we are talking about poisoning, it was necessary to conduct their examination);
- refused to provide samples from the scene of the incident to Russia;
- now it is a question of demolishing the house of the Skripal, and even the restaurant and bar where he was with his daughter;
- refused to issue a British visa to Victoria Skripal, a relative of the victims;
- No one saw Skripale after the incident.

How does Russia behave, accused of assisting Damascus in the use of chemical weapons? Russia, which today, together with the Syrian authorities, controls the Duma, from the very beginning, with all its might, showed its willingness to cooperate and get to the bottom of the truth:

- from the very beginning of the alleged incident, insisted on its independent investigation;
- urged to send an OPCW mission as soon as possible;
- not hysteria with accusations, but soberly called for clarification of what happened;
- does not hide evidence, but shows to the whole world;

As we see, even the behavior of Russia is completely opposite to the convulsive actions of Britain. And this is not surprising. The innocent side feels internally more relaxed than the guilty one, who seeks to shift her blame onto others.