An attack on Damascus from the Dar'a “sleeping zone” is being prepared. Trump's Revenge with Arabian Motives 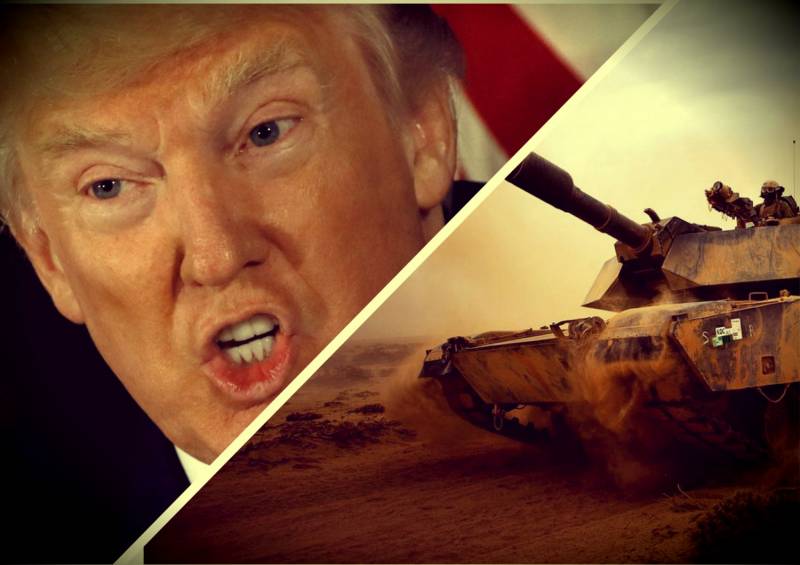 As events of recent days show, official Washington, as well as the ruling elites of Great Britain, France and Israel have not for a moment doubted the correctness of their actions in the inexorably inflaming Syrian theater of operations. After all, even the crushing defeat of the coalition in a tactical strike operation on key air bases and military sites of the CAA in the western provinces of the republic is no longer able to stop the desire of these powers to achieve, at least weighty and as maximum a final victory in revenge, not only with the Syrian Arab Army, but also Russian military contingent stationed in Syrian territory.

Thus, US Assistant Secretary of State and ardent Russophobe Wess Mitchell, speaking on April 18 before a committee of the House of Representatives of the US Congress, declared Washington’s willingness to “use proportional force against the Russian contingent” to protect American interests in the Syrian Arab Republic. Such an unreconciled, but bold anti-Russian rhetoric from Mitchell sounded in addition to the already hackneyed topic about the February clash of the Wagner PMC with the SDF formations and the American contingent in the Husham pocket, to which many have long developed a very strong immunity.

The obsession of the state establishment on this topic is no longer surprising. The real concern here is a completely different point: the author of the threats addressed to Russia, Wess Mitchell, will soon become a backup “link” to US Secretary of State Michael Pompeo, who is being prepared for approval by the Senate, who also has sharp anti-Russian attacks, and also White House Chief Donald Trump Speaking in a more accessible language, the “secondary state” of the United States (consisting of American hawks subordinate to the Israeli lobby and protecting the interests of the “war party”) eventually managed to “re-educate” Trump under the geostrategic plans advantageous to him.

And if immediately after his election as president of the United States, there was a desire to normalize and maximize warming of relations with the Russian Federation, as well as to jointly counter international terrorism, then just one year later the rhetoric changed exactly the opposite. And now the moment came when from the formerly occupying "Trumpnasha", 45-th President of the United States turned into a very malleable and dangerous "material for modeling" more and more new images that threaten global military-political stability. For example, now, in order to preserve normal ratings, he has to quickly eliminate all foreign policy “loopholes”, in which there are even the slightest hints of ties with Russia. Under a long escalation period, staff departments are being redrawn. A striking example of this is precisely the dismissal from the post of US Secretary of State Rex Tillerson, and the promotion of Pompeo’s candidacy. As for the Syrian theater, as we said earlier, coalition forces led by the United States and with the support of Israel will definitely make one or several attempts to take revenge, especially after a failed missile strike, where they confidently achieved no more 25 of 105 launched missiles.

The revenge involves not only the next, even more powerful, MRAU for SAA objects with the additional use of carrier-based tactical fighter F / A-18E / F “Super Hornet” and the connection of ammunition RGM-109E, placed on the new destroyers DDG-51 USS “Arleigh Burke" , DDG-84 USS "Bulkeley", DDG-98 USS "Forest Sherman" and DDG-99 USS "Farragut" (entered the Mediterranean on Wednesday April 18), but also a hybrid ground operation, with the advantage of using the SSA bridgehead in the "de-escalation triangle "Dar'a - Essaouida - El Quneitra" in the south of the SAR. So, news The VESTI.RU publication, citing Syrian military-diplomatic sources, claims that the militants of the Free Syrian Army and Jebhat al-Nusra are actively building up their offensive fist in the area of ​​the city of Dar'a and have already concentrated hundreds of units on the Damask operational direction light and heavy armored vehicles, as well as more than 12000 thousand well-trained militants. About the transformation of this "de-escalation zone" into the area of ​​active hostilities, we spoke in early April. Today, this forecast is even one step closer to the truth.

The swinging of the situation near El Kuray (the western environs of Dar'a de-escalation triangle) is confirmed by data published on the Twitter page of an Israeli columnist and analyst, @David Daoud, who is a supporter of FSA militants. He reports that the Shabab al-Sunnah rebel detachment destroyed a group of Hezbollah fighters. As far as we know, the latter still plays a crucial role in the confrontation with groups of jihadists from IS almost all over Syria and has an impressive size in the southern provinces of the SAR, especially near the Syrian-Lebanese border.

This is done only for one purpose - to provoke Hezbollah’s field commanders to take immediate response without the consent of the CAA command. Then all pro-government forces will be accused of violating the de-escalation regime established in the Dar'a area. The open common frontiers of this opposition bridgehead with Jordan will allow rebels to receive material and technical assistance from such allies as the United States, Israel, Great Britain, France, Saudi Arabia, United Arab Emirates and Qatar on an ongoing basis. Thus, the former “de-escalation triangle” will turn into a real exhausting hot spot for the Syrian Arab Army, not by the day, but by the hours pulling out of the Syrian military, “Tiger Forces” and “Hezbollah” all the resources, plus morale. The only way out here can be a lightning offensive operation with the previous destruction of observation / strongholds located on Darya, Essaouida and Quneitra heights along with two strategic highways connecting the “green bulwark” »Opposition terrorists with Jordan and Israel. Moreover, it was necessary to begin the assault on the southern “half-boats” several months ago, when the group of militants here was relatively small (today there are just over 10 thousand, tomorrow there may be more than 15 - 12 thousand).

It is likely that the offensive actions of militants in this region will be supported not only by high-precision fire weapons coalitions from At-Tanfa and Hel Haavir, but also units of the armed forces of Saudi Arabia (the Royal Saudi Ground Forces) deployed to the Jordanian-Syrian border. Not everyone drew attention to the fact that the level of tension in southern Syria increased precisely at that period when Donald Trump held consultations with the leaders of the Asian countries regarding the possible replacement of the 2-thousandth American contingent with the analogous Arab grouping. The head of the SA’s foreign policy department, Adele Al-Jubeir, rated this idea very positive. According to the newspaper The Wall Street Journal, the White House intends to introduce the Arabian army into the SAR to eliminate the “security vacuum” after the withdrawal of the KMP and USF units, but it is almost impossible to trust such information.

Imagine the picture when the Pentagon transfers control over the richest oil fields of Al-Omar to Riyadh. Moreover, it is hard to imagine the interaction of the Kurdish detachments of the “Syrian Democratic Forces” with the Sunni divisions of the armed forces of Saudi Arabia, feuds on religious grounds with armed SDF detachments are simply inevitable here: different views, different worldviews, etc. Moreover, back in early September 2017, Kurdish political analyst Siddik Hassan Sukru noted that Riyadh views Kurdish people's self-defense units in the Persian region exclusively as an excellent "cannon-fodder" for clashes by Shiite militia supported by the Islamic Republic of Iran. Even pro-American Kurds from the SDS are unlikely to sign up for such a “neighborhood”.

Obviously, we have another action, precisely verified by the American defense structures, which absolutely does not provide for the withdrawal of the US military from Syrian Kurdistan, but consists only in additional input of the military units of the SA, Qatar, and maybe the UAE. You do not need to be a great expert to understand which operational directions this Arabian “gang” will be directed to. First, it is the above-described so-called “de-escalation triangle” “Dar'a-Essaouida-Quneitra”. As you understand, the 12-18-thousandth contingent of "rebels" from FSA and "al-Nusra" is clearly not enough to break through the fortifications of the Syrian Arab Army covering the southern approaches to the Syrian capital. In the case of military support from Riyadh, Doha and / or Abu Dhabi, this number may increase to 50 - 70 thousand troops. The most absurd and unpleasant moment here is that with Riyadh in February 2018 all documents were signed under the contract for the sale of the best long-range air defense systems C-400 Triumph; it turns out that here we get "spitting in the face" from our Persian-Asian "partners." Fortunately, the complexes have not yet been delivered and Moscow has the possibility of cancellation of the contract.

Secondly, some units of the Arabian army can also “abandon” At-Tanfa’s 55-kilometer “safety zone”, from where they can launch an offensive operation with the US, British and FSA offensive forces both on Damascus and in the direction of the Euphrates. Alarms continue to come from this area almost every day. So, on April 19, another attempt was made to capture the T-3 station by IG formations from the “awakened cauldron” outside Palmyra, just in the direction where the rebels from At-Tanfa plan to occupy some villages on the territory controlled by the CAA. For a quick offensive in this direction, coordinated with both ISIS and the FSA, the coalition lacks heavy armored vehicles of the Saudi Arabia. Considering that only Abrams in the M1A2 and M1A2S versions of the Saudis are about 340 - 350 machines, 50 - 100 units. can be sent for joint operations with the forces of the Western coalition against the government forces of Bashar al-Assad. 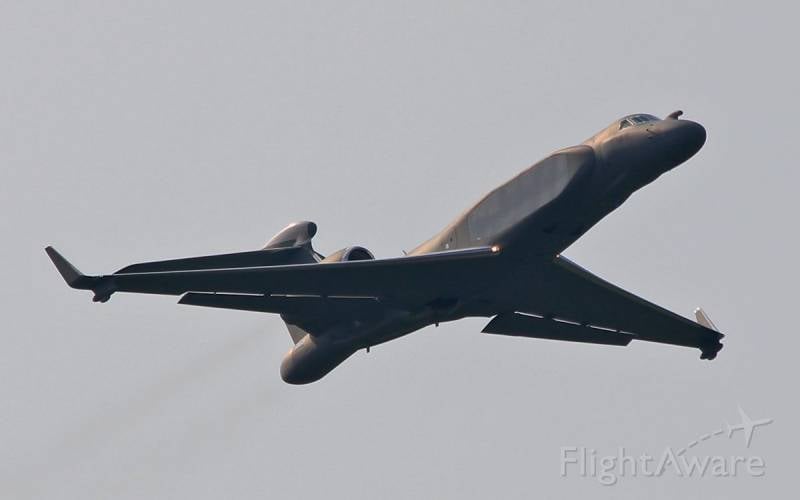 The Emirates are able to provide for such an action an impressive number of Leclerc MBTs equipped with modern terminals for exchanging tactical information on the battlefield; and the list is far from complete. The undoubted strategic advantage for the States here is that the transfer of Arab tank brigades to the Syrian-Jordanian border will take about 1 - 1,5 days, while the transfer of a much smaller amount of heavy armored vehicles by dock ships and universal amphibious assault ships from the United States will take more than three weeks.

New data on changes in the situation around the preparation of the “southern de-escalation zone” for hostilities against the CAA may appear in the coming days, because in the evening, 19 of April, the Daria area was again under close surveillance by the American aircraft of strategic radio and electronic intelligence RC-135W and more small-scale Israeli DRLOIU-G550 "Eitam" CAEW aircraft operating south-west of Lebanon’s air borders.