April 22 2018
50
The US Assistant Secretary of State, and then the American President unexpectedly turned to the events of two months ago. 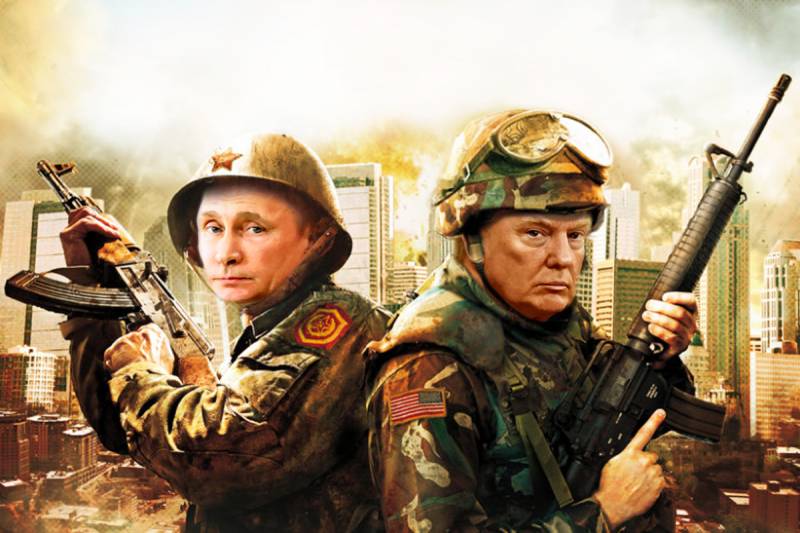 Recall, first Assistant Secretary of State Wess Mitchell, speaking in the House of Representatives, said that Russian mercenaries tried to attack US forces in Syria.

“The recent unsuccessful attack on US forces of Russian mercenaries has become one of the sobering examples of Russia's confrontation with the West,” said Mitchell.

However, this seemed insufficient and literally in a few hours this (already pretty outdated) "news"At a specially convened press conference voiced by trump.

Either Mitchell “warmed up” the public before the White House’s host, or the American leader thought that the Assistant Secretary of State had not effectively leveled the news, and he decided to fix the “hack” of the official.

Donald Trump in his usual emotional manner spoke about a long-standing incident involving extreme degrees. “We already talked about this some time ago, we had a very, very tough battle in Syria recently, a month ago, between our troops and Russian troops. And it is very sad. A lot of people died in this fight, ”the US President told perplexed journalists.

Recall that, according to the American information, February 7 was attacked not by Americans, but by the headquarters of the Syrian Democratic Forces (SDF) by pro-government militias eight kilometers east of the agreed conflict prevention line on the Euphrates River in Deir Province ez-zor The US command report indicated that retaliatory strikes had been made. In the American media, it was reported that about 100 fighters of Syrian pro-government forces were killed.

A little later, the official representative of the Ministry of Foreign Affairs of Russia, Maria Zakharova, acknowledged the death of five Russian citizens in Syria who were in the ranks of Syrian irregulars and who are not servicemen.

Then, American official sources stated that they did not have any information that the Russians had been hit by artillery and the US Air Force.

It must be said that this was a common practice in Syria (and in some other conflicts in which third countries were involved) when foreigners died under the blows of “external” players.

Thus, for example, according to Russian and foreign media, as a result of the “Calibra” strike on the outskirts of Aleppo, an entire reconnaissance and coordination center was destroyed, which was located in a territory controlled by terrorists. Its staff, consisting of three dozen officers and specialists from the United States, Britain, France, Israel, Saudi Arabia and other countries, died.

However, there were no official statements in this and other similar cases from either side, which was completely understandable.

Representatives of the West were not able to advertise their interaction with terrorists, and it was not in their interest to report that their military were suffering losses in the “alien war”. Russia, on the other hand, is not interested in the escalation of tension - it has punished accomplices of the terrorists, and there was no need for it to force the West to take demonstrative “retaliatory steps”. Although, of course, no one leaves the death of its citizens unanswered, even if they were hit by a bomb or a rocket by accident, as it also happened more than once.

There is probably no need to talk about some kind of gentlemanly agreement, but the parties all adhered to the rule of non-disclosure, at least in order not to be under the pressure of public opinion, to preserve the freedom of maneuver and the opportunity to act for reasons of expediency, and not to please the public.

Recall that Zakharova was forced to officially recognize the death of the Russian PMC fighters against the backdrop of a grand information scandal that took place, not without effort, from the blogger Igor Girkin, who used materials from the Ukrainian media.

But the question is: for what is Washington raising, and at the highest level, this topic, completely sucked and rotten, and also in a completely new interpretation?

Everything is very simple. Despite Trump’s assurances that all the missiles launched in Syria have reached their goal, few people believe in it (even in the United States). The missile attack, which cost the treasury nearly 100 million dollars, does not look like retribution or victory.

Since American philistines, convinced by the efforts of the media in the absolute military superiority of the United States, it is difficult to believe in the ability of the CAA to intercept most of the "new, good and smart" missiles, the statement about the "contractual" nature of the "retaliation strike" inevitably arose and was propagated. That is about its imitation coordinated with Moscow.

And since neither Trump nor his team admits that the low impact of the strike is also related to the fact that they were afraid to catch the Russians, the opponents of the incumbent president again accused him of “working for the Kremlin” and unwillingness to strike at “their own”.

And in order to refute the accusations of the “agreement” and show the Western public their “Hamburg bill”, testifying not only about the superiority of the American military over the Russians, but also that Trump beats them “cruelly” without hesitation and was pulled out into the light and fairly embellished already forgotten история about the February 7 incident. Because nothing else, even remotely resembling a "victory over the Russians", was in the assets of the Americans.

And her re-voicing at the highest level, from which Trump could not resist, says that the American leader tried to achieve maximum public attention to this injection.

Ctrl Enter
Noticed oshЫbku Highlight text and press. Ctrl + Enter
We are
Overseas ally? Donald Trump - US Presidential CandidateSituational analysis of the death of the MH17 flight (Malaysian Boeing 777), made on the basis of engineering analysis from 15.08.2014
Military Reviewin Yandex News
Military Reviewin Google News
50 comments
Information
Dear reader, to leave comments on the publication, you must sign in.