Montserrat. Monastery on the split mountain

April 25 2018
41
Post a story about Montserrat need ... with "target designation." That is, it is located only 50 kilometers to the north-west of Barcelona, ​​and since the roads are excellent there, it is in fact very close. If you translate this name from the Catalan language, it will mean "split (or sawn) mountain", and if you look at it from afar, you can quite agree with it, although it seems to someone that it is "a lot of sugar heads, ”and even“ damn fingers ”sticking out of the ground. Or "fingers of angels"? This is someone like that! 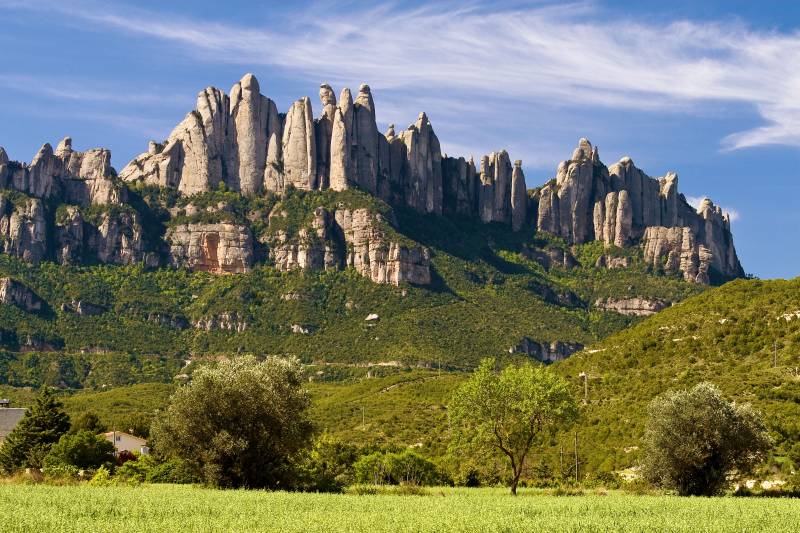 By itself, this array is quite small: only 10 kilometers long and five wide. Its height is not more than 1236 meters. So here, too, there are no special preferences for other mountains in Montserrat. And yet, this place is one of the most visited in the world. Why? 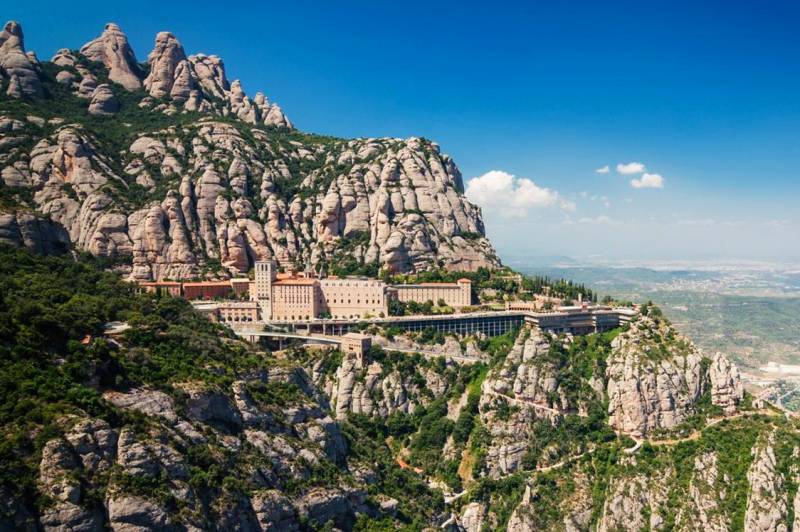 The monastery complex and the road leading to it.

The reasons are called three, and each of them matters. And so all together and even more so.

Let's start with the first: here at the height of 725 meters above sea level there is the monastery of Montserrat, owned by Benedictine monks, and its basilica keeps the unique Catholic shrine - the Black Madonna. The second reason is simpler, but no less significant - this is the amazing beauty of the local limestone rocks, which were admired and admired by artists, poets, and simply lovers of the species. 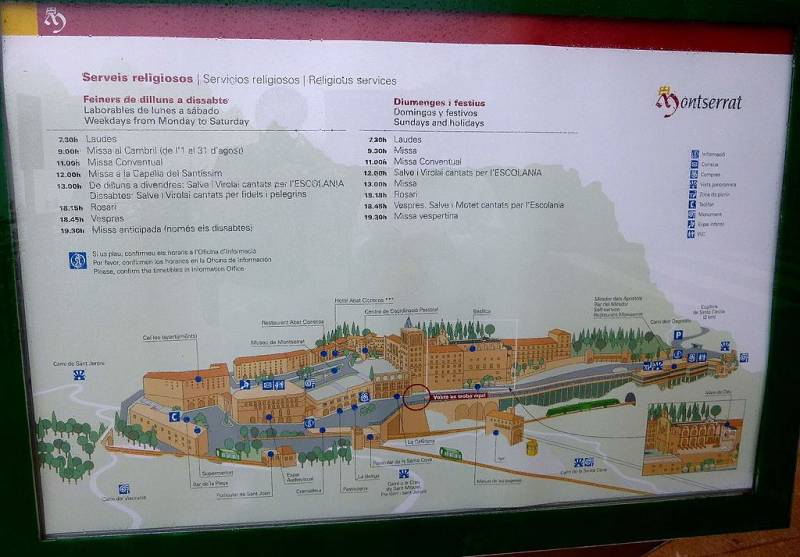 Map of the monastery with all its buildings.

The third reason is that "Catalonia is not Spain!" And here we have it, and you have not. And if so, then “this” must be seen, otherwise what kind of Catalan are you ?! 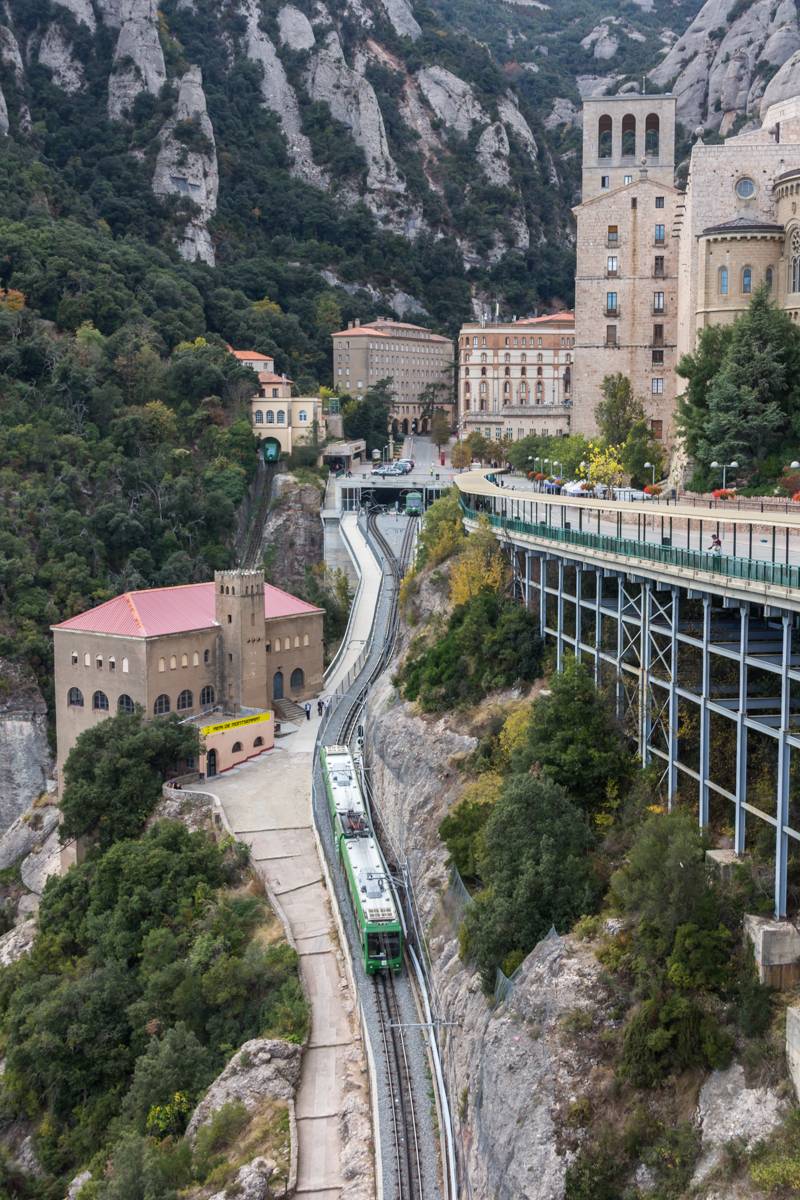 Three-track narrow gauge railway going to the monastery itself.

Legally, Catalonia is one of the 17 major provinces of Spain. And each such province enjoys certain political rights: it has its own flag, its own government, and the population is allowed to speak its native language. Legal proceedings and documentation are conducted in two languages ​​- local and Spanish. That's just the Catalans all this does not suit, and they want complete independence. The desire for it is manifested in Catalonia in everything: the names of streets, cities and railway stations here are written and announced aloud in the Catalan language. Catalan flags are hung on 80% of the balconies in the cities of Catalonia (this does not mean that Spanish is hung on the remaining 20% ... they are simply not there!). The inscriptions on the walls and transformer booths are visible: “Catalonia is not Spain” and then it’s very bad about the police ... 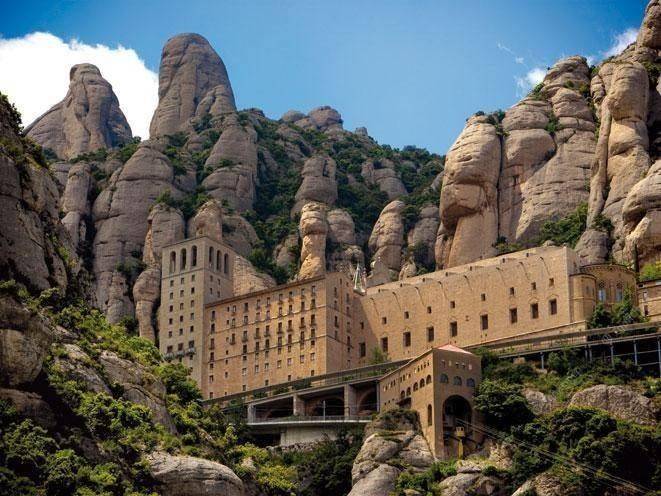 It is curious that in Spain, where 75% of the population are Catholic, it is in Catalonia that atheists are the most. In the local cities, especially the small ones, the closed temples no longer surprise anyone, and serving them is a holiday for local believers who are going there as an ad, as if to a club. 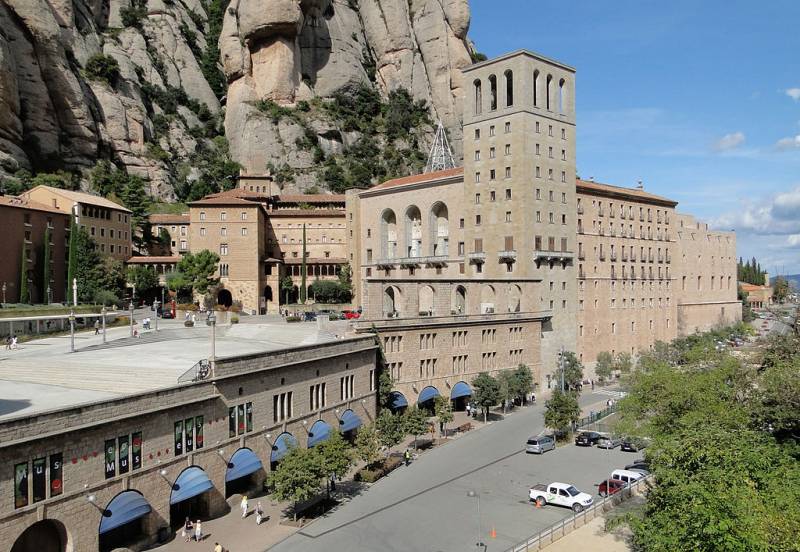 Montserrat is only one of the very few Benedictine monasteries still preserved in Catalonia. But he owns the Black Madonna, and Catalonia itself owns the Costa Brava, which received the blue flag of UNESCO. In addition, Catalonia contributes to the budget of Spain up to 25% of all its total government revenues, so the Catalans believe that they give more to Spain than they receive from it! And they want the opposite, and they very much want it. And the one who wants something should appeal to the Black Madonna ... Here are the Catalans and climb this mountain to ask for the freedom of the whole Catalan people ... well, ask for little things for yourself personally. 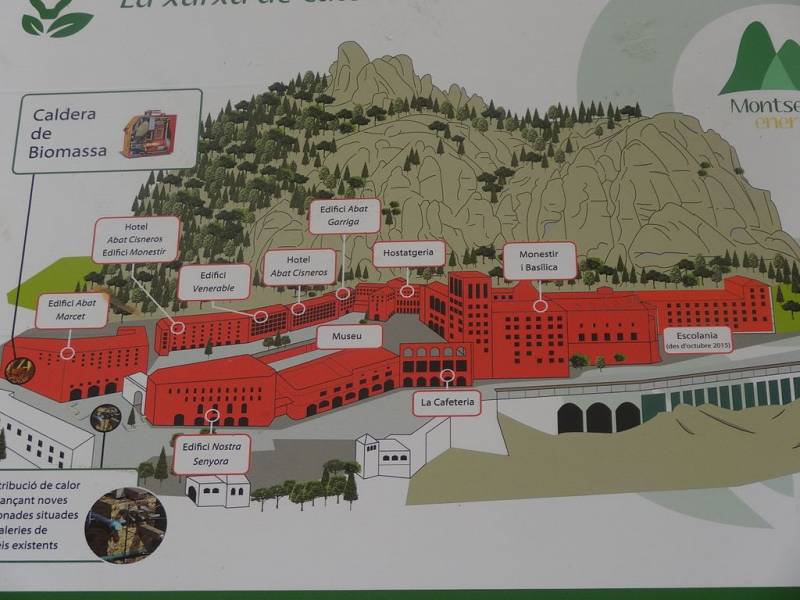 Here you can clearly see where that is located here ...

There are a lot of legends about how Montserrat appeared. Just as the legends associated with finding the figure of the Madonna, which some unknown shepherds found in one of the caves on the mountain. They wanted to tear it down, but it turned out to be so heavy, though small in size, that the local bishop took it as a sign and decided to build its temple right on the mountain. 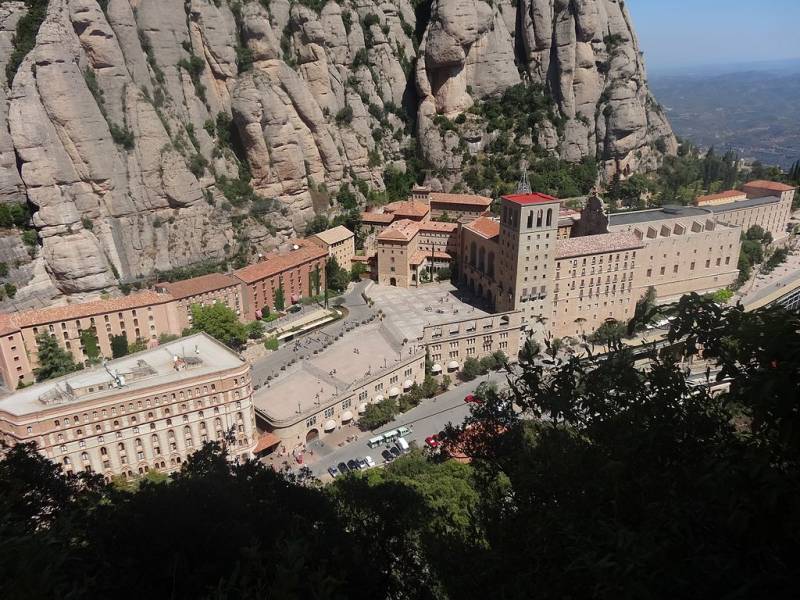 The view from above on the monastery complex is amazing.

So it was all or not, but the real person about whom we know that he founded the monastery on the mountain was Abbot Olib (971-1046). The Benedictine monks built the first basilica there, and when it was consecrated, the statue of the Madonna “agreed” to leave her cave and move to a more appropriate place for her.

Even then, Madonna’s face and hands were of a dark color, but the Baby in her lap and the sphere in her right hand, which could be touched to fulfill her cherished desire, was not yet at that time. Both the baby and this sphere were made only in the XVIII century. But why is it dark? Was it really Madonna was a black woman? Negretta - “little black”, as the Catalans call it, owes its appearance to antiquity. Then, in pre-Gothic time, the Christian basilicas were small, with low arches. And it is clear that in such premises soot from candles all subjects covered with a thick layer. But if gold can be washed from gold and silver, then it is eaten tightly into porous wood. So, over time, the wooden parts of this sculpture and acquired its own characteristic dark color. 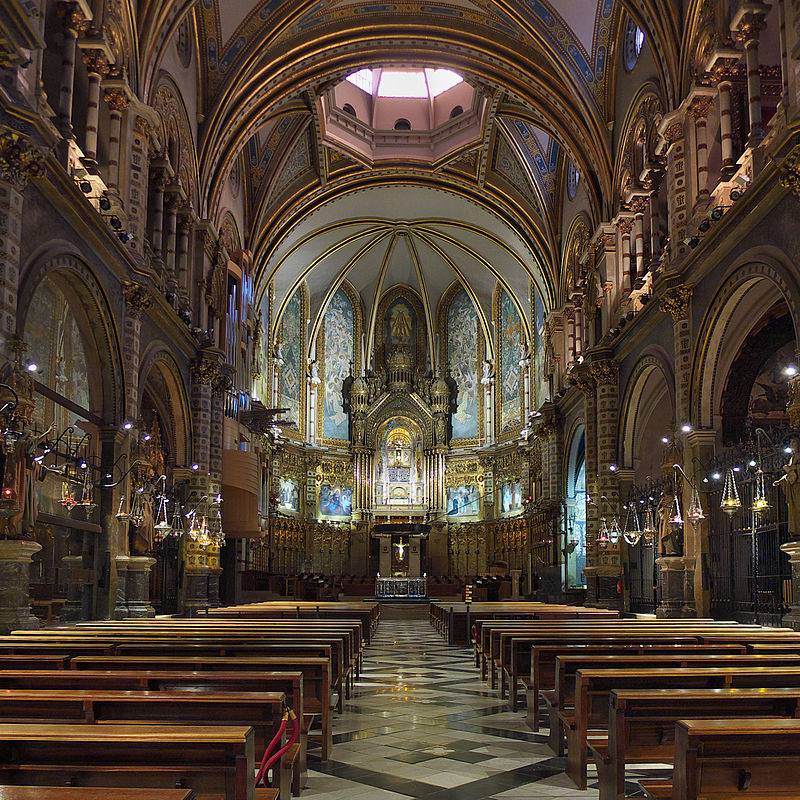 This place played a special role in the fate of one very famous person. His name was Ignatius de Loyola (1491-1556). And he was in his youth and lecherous and revelers, and a drunkard, and perhaps the most true atheist. But when he was 30 years old, he was badly injured during the siege of Pamplona. Once in bed, he began to read spiritual literature out of boredom and ... this brought peace to his soul. Loyola had this effect so that he went to holy places and first of all decided to visit Montserrat. And there, standing in front of the statue of the Virgin, he spiritually saw the light, grasped the truth and began to fight against the burgeoning disbelief. 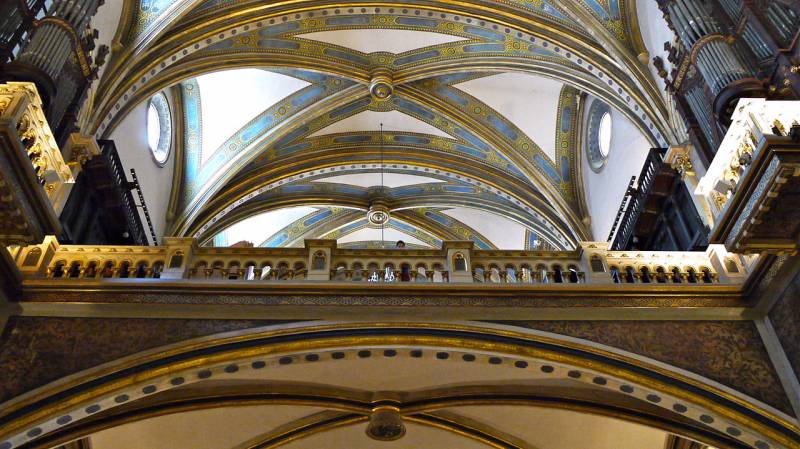 However, neither the intercession of the heavens nor the sanctity of the place saved the monastery when, in 1811, it was destroyed by French soldiers. What for? It’s just that Napoleon believed that the holy grail — the cup of Christ — was hidden on Montserrat and, by the way, decided, like Hitler afterwards, to seize this relic, hoping that it would protect it. I did not know, by the way, this fact from the life of Napoleon, and he fell heavily in my eyes. Well, one had to be so stupid, by God ... Fortunately, the monks hid the statue of Madonna in a safe place, and the godless French did not find it! 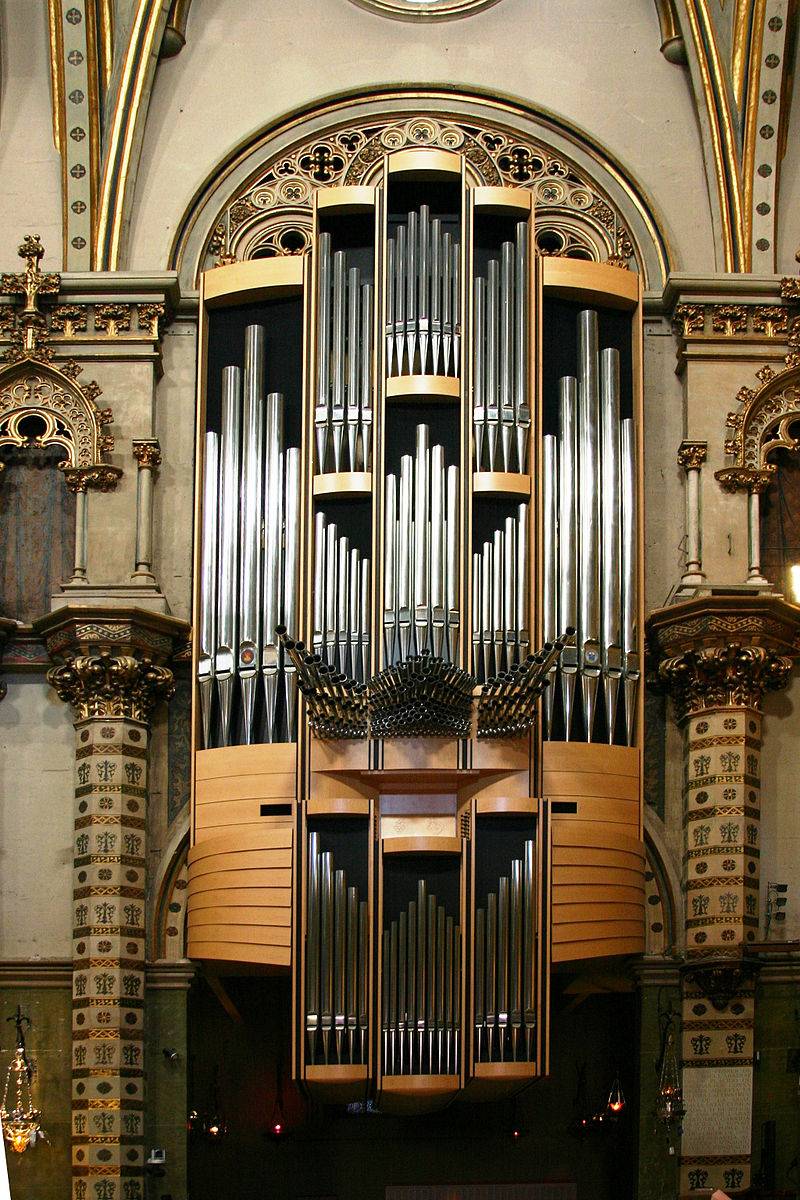 For a long time, Spain did not have the strength or the money to restore the monastery, and it began only in 1844. It began, but continued with the donations of the Catalans and the collections of the Benedictine monks for almost 100 years. And what is interesting is that when General Franco came to power in the country in 1936, he banned all internal cultural differences in the country, including all languages ​​except Spanish. But only in the walls of the restored cathedral of Montserrat, the service, the weddings, the funeral services, and the baptism - everything was done in the native Catalan language. And nothing even Franco could not do about it.

By the way, it is believed that his shrine, the Black Madonna, continues to fulfill the cherished desires of all who refer to it, regardless of whether they believe or not, or simply come here as tourists. 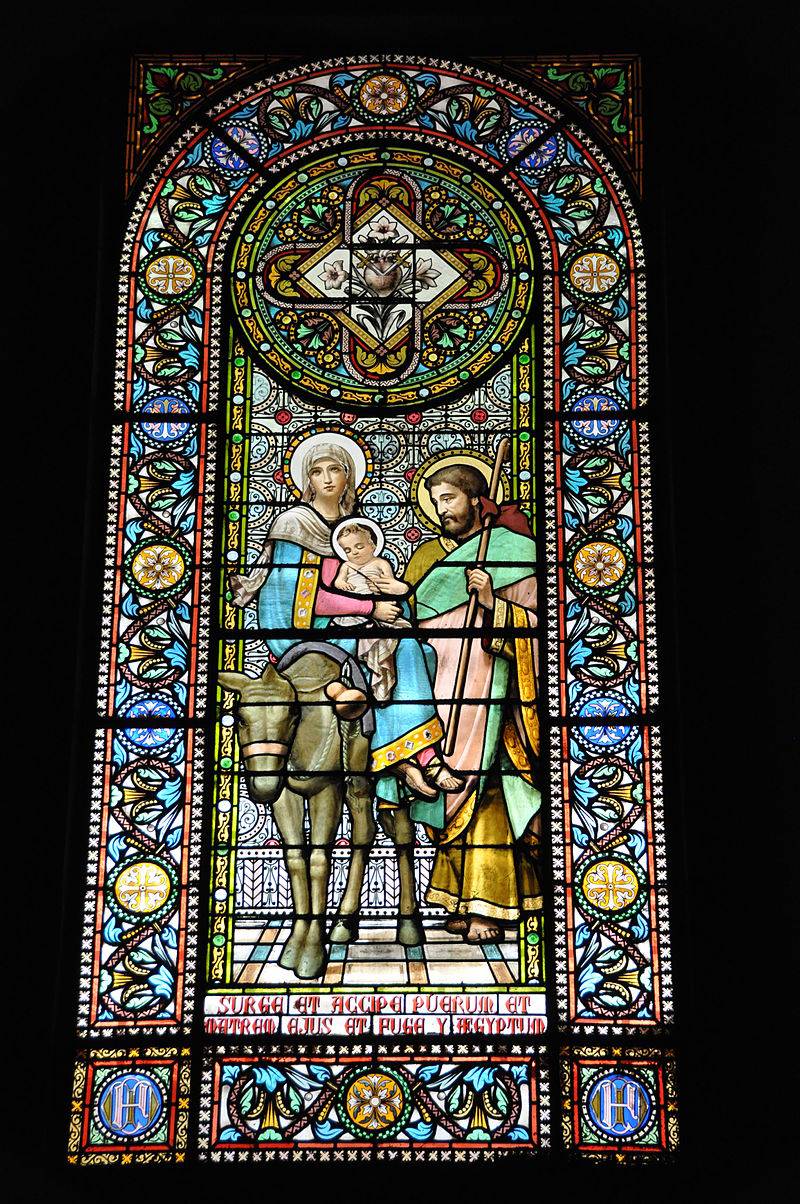 As for the way to see all this with my own eyes and check the power of the Madonna - this is to go to Spain, to Barcelona, ​​and go on an excursion in the monastery of Montserrat. If an organized tour seems too expensive, you can go there even by train. And you can get to the top by a special mountain train, by cable car or just on foot. 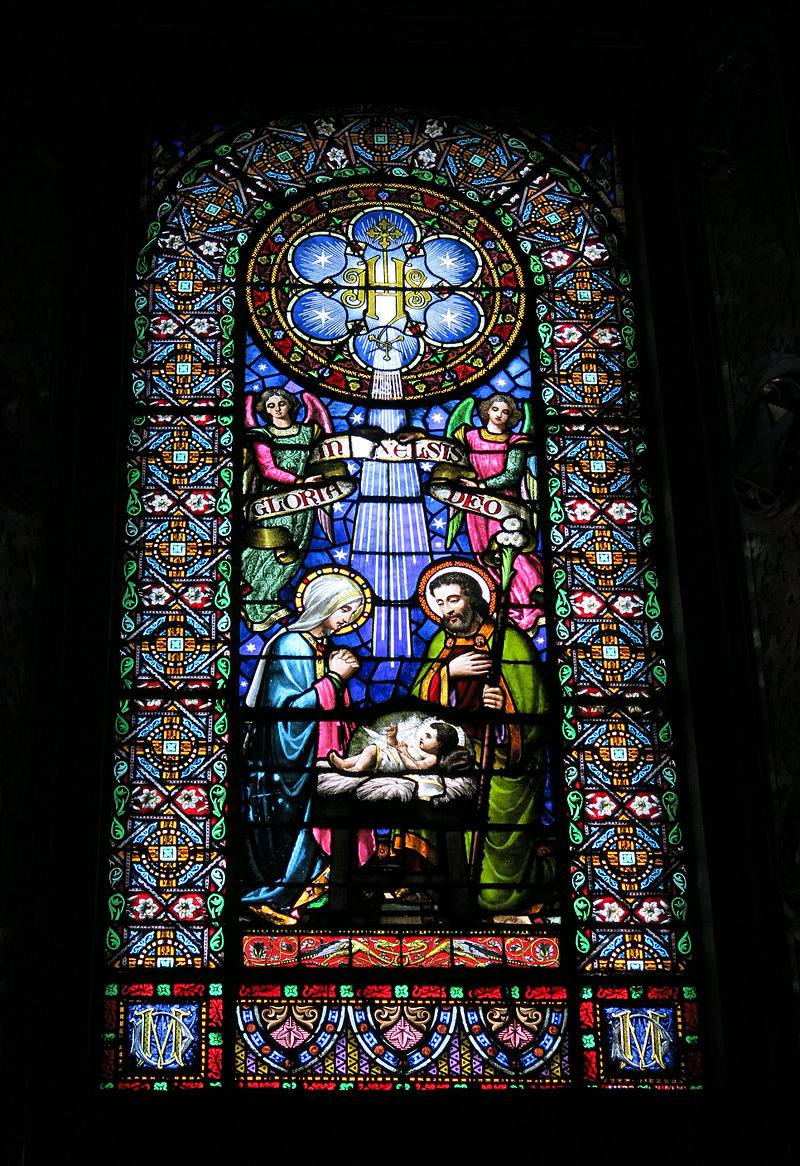 In Spain, electric trains are not quite ordinary. Until Barcelona, ​​they go on the surface of the earth, and almost silently, but on the way to the city they dive underground and turn into ... subway trains and vice versa. Here and to Montserrat from the Barcelona-Plaça Espanya station is the R5 Barcelona-Manresa line, by which you have to go to Monistrol de Montserrat station (flashes in the car and the display and announcer is announced at the foot of Montserrat mountain). In time, it will take 1 an hour, 10 minutes. The narrow-gauge Cremallera de Montserra train goes to the mountain from here, and even to the monastery itself, and while you ride it, you can see a lot of interesting things. On average, trains from Barcelona and the narrow gauge train run every hour, so in any case you will not be late. 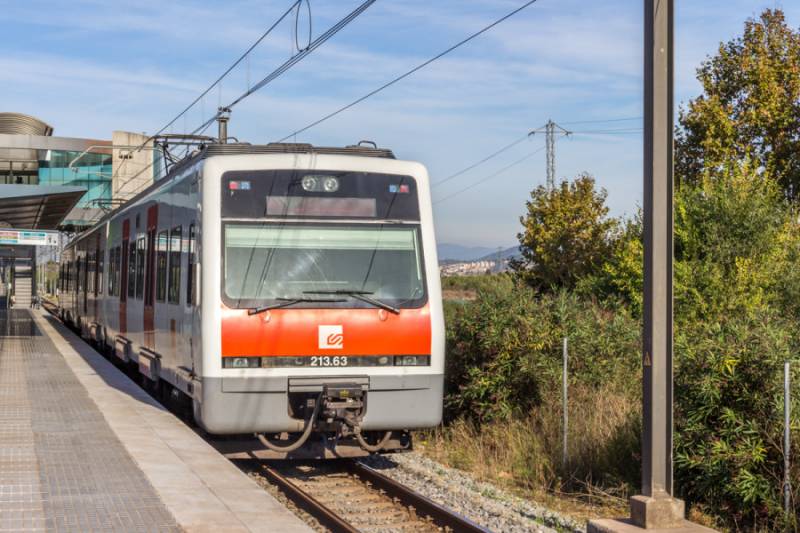 These electric trains run along all branches in Barcelona and its surroundings. 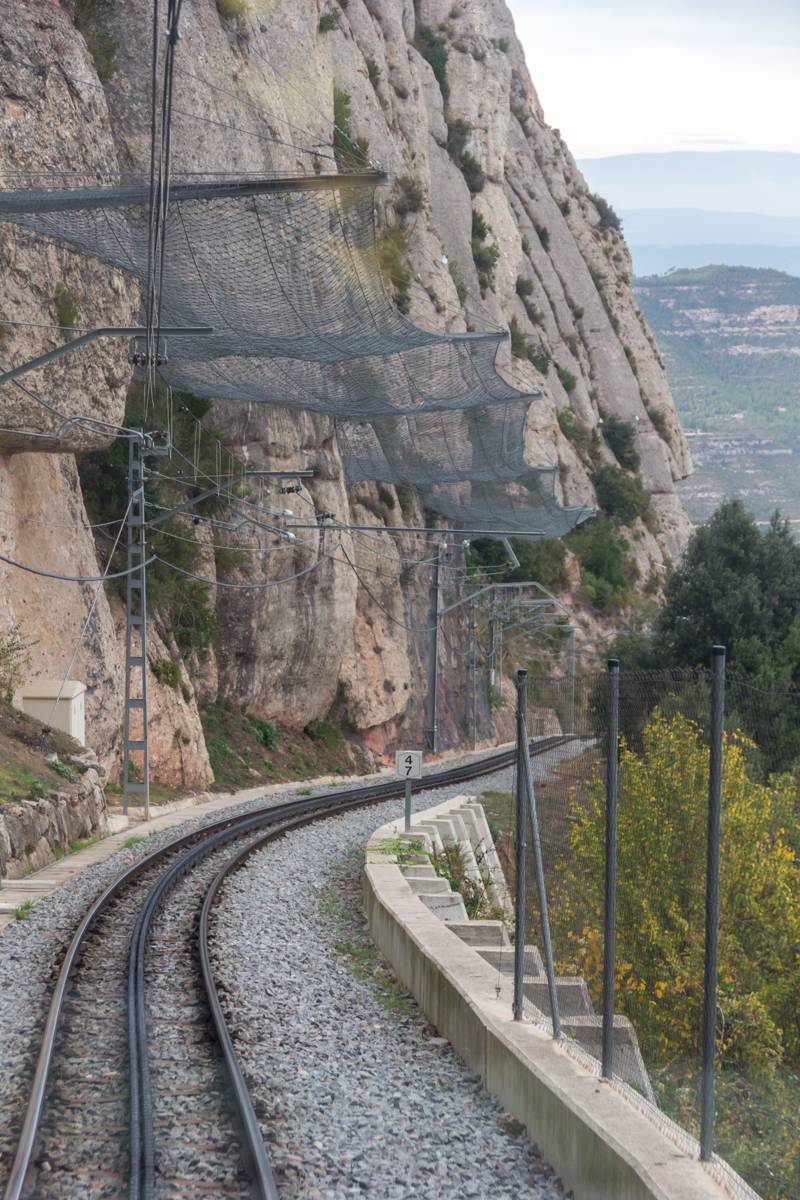 To protect against falling stones in the most dangerous places hang nets.

Funiculars on Montserrat are not even one, but two: Funicular de Sant Joan and Funicular de Santa Cova. The first is the coolest funicular in Spain. It goes to the very top, from where the walking routes through the Montserrat park start. The second one can get to the Holy Cave, where, according to legend, the statue of the Black Madonna was found. 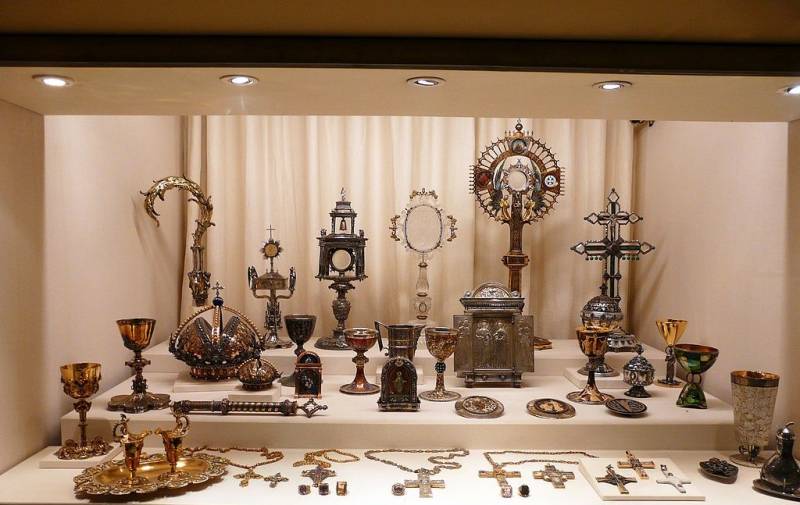 In the museum. Objects of the cult of high artistic merit.

In the cathedral, everyone approaches her statue in a queue and touches her hand. It’s impossible to stand and hold on to it for a long time - a special worker is on duty nearby and he hurries too religious or slow. The statue of Madonna is behind the bulletproof glass, but in it a cutout is made just for her hand. The people holding her hand say they felt the divine energy emanating from her. But this is someone like that. Someone to the touch is just a cool tree, but when you look at it, you unwittingly imagine the millions of people passing by it and the millions of consciousnesses that came into contact with this tree. And it seems to be unwittingly - “What if something is there!” And the lips themselves whisper - “Give me ... to my loved ones, to all people ...!” Although, probably, you should ask for the opposite ... 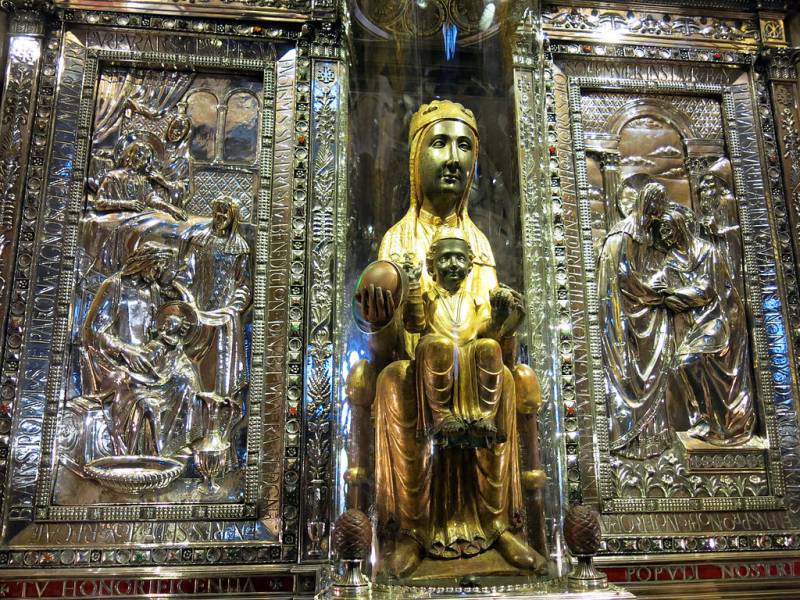 Here it is - "Black Madonna"! Ask and it will be given you according to your faith!

Ctrl Enter
Noticed oshЫbku Highlight text and press. Ctrl + Enter
We are
Chernobyl notebook. Part of 3The hunt for the Blackbird
Military Reviewin Yandex News
Military Reviewin Google News
41 comment
Information
Dear reader, to leave comments on the publication, you must sign in.