Scenarios of new attacks on Syria. What does the coalition prepare after “working on the bugs”?

April 19 2018
95
After a partially coordinated military communication channel, a limited and totally ineffective attempt to launch a missile attack on some facilities of the Syrian Arab Army, which was made on April 14, at the Pentagon, the Central Command of the Armed Forces of France and the United Kingdom is very, very large-scale work on the bugs. Its goal is to search for new concepts to overcome Syria’s powerful integrated / network-centric missile defense system built around the Buk-M2018E advanced military anti-aircraft missile systems, four dozen Pantyr-C2 anti-aircraft missile systems still effective today. Osa-AKM short-range complexes, aggregated into a single information network with Russian 1L96 radars, as well as with A-6RDDN aircraft, using automated anti-aircraft missile control systems and batteries and brigades types "ranzhir", "Polyana-D50M" and "Baikal-4ME". 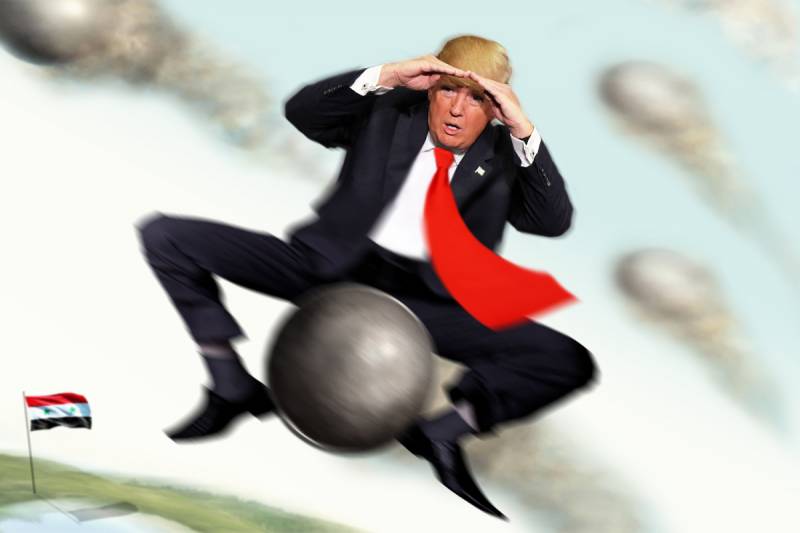 This is not surprising, because in the US Department of Defense, despite a well-established mechanism of duping the electorate of the Republican administration and the “hawks” from the Democratic Party with uru-patriotic media statements about 100% destruction of all marked targets by all 105 tactical and strategic cruise missiles, true to the truth the real state of things, demonstrating the complete discrepancy between the “breakthrough” capabilities of the slow 0,9 flywheel Tomahawks and the technological potential of Russian mobile devices Missile defense Looks even more revealing история with 8 intercepted by British Storm Shadov tactical missiles, which demonstrated zero efficiency even during a secretive launch due to the Antilivan mountain range. Proceeding from all of the above, we can conclude that the work done by NATO specialists on the mistakes will include both improving the organizational, operational-tactical and technical aspects in developing the next massive missile strike on Syria, and intensifying the work of undercover intelligence.

The implementation of the last point may be required to accurately determine the locations of the Russian military contingent (in order to avoid an erroneous strike with consequences that are critical for the Western coalition). The fact is that the recent experience of conducting airborne electronic reconnaissance before striking the SAR shows that the operators of the strategic radio electronic and radio reconnaissance aircraft of the RC-135V / W "Rivet Joint", using the REAR 85000 ES-182 MUCELS complex, apparently They were not able to calculate the coordinates of the radio stations of the Russian subdivisions in the western provinces of the republic (they were hidden behind a thick veil of interference from the REB), resulting in an extremely limited impact of all 105 rockets. Yes, and he was done very carefully, while maintaining military channels of communication with the Russian side. It is highly likely that before the future attacks, the States will try to correct this omission, which will become a kind of "key" to a more powerful and large-scale rocket attack using two, three or more hundreds of high-precision weapons weapons.

This attack should be considered not only in more detail, but also taking into account the radically changed operational-tactical situation, due to the noticeable complication and “weighting” of the configuration of the naval and military-air “backbones” of the Allied Command in the Middle East. To understand what is at stake, you first need to look at the ammunition sets present in the Persian Gulf, Red Sea and Eastern Mediterranean tactical (TLAM-C / D) and strategic (UGM / RGM-109E) carriers of Tomahawk cruise missiles . After the last strike on Syria using all 66 "Axes", in universal vertical launchers Mk 41 destroyers of missile control "Laboon", "Higgins", "Porter", "Donald Cook" (the last 2 of the ship did not participate in the strike, but carried out air defense over the British Avb Akrotiri), as well as the CG-61 USS "Monterey" cruiser, there are more than 2 / 3 arsenal of this type of cruise missiles (from 150 to 200 units). The intra-body turret launchers of two B-1B “Lancer” strategic bomber missile launchers, capable of carrying JASSM-ER long-range tactical missiles to 48, are also reloaded. The number of precision weapons is already more impressive, isn't it?

All this means that in order to re-demonstrate the effectiveness of the Syrian Arab Republic’s air defense forces at the level of April 14 (68% of the enemy’s downed missiles), it will be necessary to transfer and deploy additional anti-aircraft missile systems of the Pantyr-C1 type, Tor Top2P (having 4 target channel and target speed from 2600 to 3600 km / h) or decommissioned “Buk-М1” in a fairly impressive amount. Such a response measure could completely solve all the problems, if not for one “but”: the next rocket attack may be far from “one-time”, as the head of the US defense department James Mattis said a week ago, but two- or even three-stage. Moreover, this time not only tactical and strategic cruise missiles flying over ultra-low-altitude trajectories in the mode of rounding the terrain at near-sonic speed, but also such air attacks as high-speed 2,2-flywheel anti-radar AGM-88 / E HARM / AARGM type missiles with a range from 70 to 170 km depending on the height of launch from the carrier suspension, as well as UAV-fake targets / EPR simulators of the type ADM-160A / C "MALD / -MALD-J ".

The latter have a unique hardware-software ability to repeat the effective dispersion surface of most types of precision weapons, as well as tactical aviation 4th and 5th generations, thanks to which they can easily mislead radar operators of long-range radar detection and anti-aircraft missile systems by clogging the target channels of 30H6E, 9C36 illumination radars with false target markers and, as a result, overloading the fire performance of almost any SAM (from Buka-M2E to S-300PM1). No less serious problem, even for enhanced Syrian air defense, can also be created by hardware modules that emit radio-electronic interference, the element base of which is integrated in the advanced avionics of MALD-J traps-simulators.

In fact, a pair of such miniature drones, leading a whole wedge of Tomahawks and JASSM-ER, can partially cover it with a “cloud” of powerful noise interference, which makes it difficult to select real targets. The integrated use of smart ADM-160C EPR simulators with AGM-88E anti-radar missiles and hundreds of low-altitude CRMs will require Syrian anti-missile defenses with even higher operational flexibility, network-centric qualities, faster speed and long-range missile interceptors, as well as advanced tools, and higher-level interceptors, as well as advanced tools, and network tools, faster speed and long-range missile defense interceptors, and advanced tools, as well as advanced tools and advanced tools. / electronic reconnaissance capable of quickly selecting an imitation emission of ADM-160C against the background of real cruise missiles or tactical aviation units. Thus, the latter’s on-board radars have a much richer range of radiated frequencies, and the Tops are equipped with a TERCOM correlation system based on a radio altimeter with a frequency range from 4000 to 8000 MHz. The similar task of detecting ADM-160C against the background of other EHV classes and tactical fighters is the REER / RTR Valeria station, which analyzes even the weakest radiation sources in the frequency range from 0,1 to 48 GHz. But nothing is known about her participation in the Syrian company.

As for increasing operational flexibility and the appearance in the Syrian air defense of anti-aircraft missile systems capable of simultaneously 4 HARMs and a couple of “narrow bombs” GBU-52 / B SDB-2 on the blades, these qualities will be inherent in the near future for the Syrian Arab Army. The last missile strike of the Western coalition became practically decisive for Moscow in the issue of supplying S-300 anti-aircraft missile systems to Damascus. If earlier such a deal could be “thwarted” by Israeli diplomatic “negotiators,” plaintively dissuading Moscow from selling these complexes in Syria, then the chaos of recent weeks, repaired by both Hel Haavir and fleets and the air forces of the USA, France and Great Britain crossed all permissible boundaries. It begins to threaten not only the national security of Syria itself, but also the continued presence of the Russian military contingent in the republic. In this case, no one gets off with cunning requests.

The exact modification, as well as the number of launchers or anti-aircraft missile divisions of the C-300, which can be supplied to Syria, has not yet been disclosed. Given the low radar visibility of the majority of tactical missiles used by Western aggressors in the Syrian theater of operations, the transfer of modern C-300PM1 air defense systems equipped with 48Н6 anti-aircraft missiles is most likely. Radar illumination and guidance 30H6E of these ZRK lightly process aerodynamic and ballistic objects with EPR 0,02 square. m and speed to 9,5M, and the equipment of these radars with universal 40В6МD towers significantly increases the radio horizon, which means that the range of direction finding of low-altitude targets in a rather complicated relief.

It is noteworthy that warnings about the transfer of C-300 CAA complexes are heard from Sergey Lavrov and Colonel-General Sergei Rudsky, Head of the Operational Directorate of the General Staff of the Russian Armed Forces, against the backdrop of the aircraft carrier “Harry Truman” that “pulls” into the Mediterranean carrier-based aircraft of which just have EW aircraft EA-18G, as well as a huge range of tactical and anti-radar missiles, which the Pentagon plans to test on a reinforced Syrian air defense. As for “casus belli” for new strikes, Washington finds another test tube with “terrible gas” with enviable regularity, and now, against the background of the future cleaning of the “Rana boiler” and the Dar'a district, the White Helmets are creative still more than enough. After all, it was not by chance that the United States Permanent Representative to the UN, Nikki Haley, left Washington with the right to continue the air operation against the Syrian government forces at any convenient opportunity.

Ctrl Enter
Noticed oshЫbku Highlight text and press. Ctrl + Enter
We are
Fiasco "beautiful and smart." Technical points failing SyriaSituational analysis of the death of the MH17 flight (Malaysian Boeing 777), made on the basis of engineering analysis from 15.08.2014
Military Reviewin Yandex News
Military Reviewin Google News
95 comments
Information
Dear reader, to leave comments on the publication, you must sign in.