April 19 2018
17
Leonid G. Minov became not only a pilot, but also a pioneer of parachuting in the Soviet Union. He survived the First World War and the Civil War, visited France and the United States, became the first Soviet man to make a parachute jump, won numerous awards, but this was not enough. Not enough to protect yourself from the rink of repression. But Leonid G. did not break down and remained faithful to his homeland. 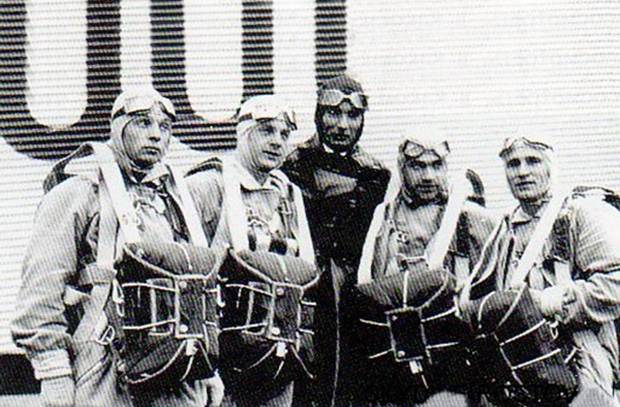 "In our opinion, he is quite qualified to teach ..."

Leonid Grigorievich was born on the twenty-third of April 1898 in the city of Dvinsk (now Daugavpils, Latvia). Here he graduated from a commercial school. When he was eighteen years old, Minov volunteered to go to the fields of the First World War. He was identified in intelligence. In September 1917, he became a member of the RSDLP (b). Could not pass him and the Civil War. Already in those years, Leonid G. dreamed of the sky. Therefore, having graduated from Moscow's 1920 Moscow Observation Pilot School in May, I went to the Polish front. A year later, Minov graduated from military pilot schools, first in Zaraisk, and then in Moscow.

When the Civil War died down, Minov took the position of instructor. And after some time - headed the flight of the first Moscow Higher School of military pilots. Leonid G. engaged not only to improve their own skills and training of other pilots, but also studied a variety of techniques of blind flight. Training cabins for pilots and a special chair were created especially for the development of this area.

A man of such a bright talent and perceptive mind was highly valued by his immediate superiors. They trusted him and, more importantly, believed in him. Therefore, in 1925, Leonid Grigorievich was sent to France as an aviation attaché at the trade mission of the Soviet Union. Thanks to his sociability, knowledge of foreign languages ​​and professionalism, Minov managed to win the favor of high-ranking French military and officials. And as a result, he managed to negotiate the purchase of four thousand aviation Ron motors. Of course, they were morally outdated, since they were released during the First World War, but the price tag made up for everything. Leonid Grigorievich bought workable power units at the cost of scrap. The Rones came in handy, since they went on to develop Soviet aviation, which at that time was noticeably lagging behind European ones.

In 1927, Minov returned to his homeland. Leonid Grigorievich hoped that after a long voyage, he would now be able to go head over to his favorite thing - flying. But less than a couple of years, as the head of the Red Army Air Force, Peter Ionovich Baranov, entrusted Minova with a new responsible task. This time, Leonid Grigorievich had to go even further - over the Atlantic Ocean. The pilot was required to collect information about the method of teaching US parachute jumpers. Also, he had to visit the company of the company "Irving", which was located in Buffalo. In those days, "Irving" was the world's leading company for the production of parachutes and various aviation equipment. In the USSR, they were not just interested in overseas developments. The fact is that parachuting in the country was in an embryonic stage of development. Minov understood all this perfectly, so he took his overseas business trip with the utmost seriousness.

Leonid G. for several days literally lived in the factory workshops "Irving", trying not to miss any, even the smallest details of the production of parachutes. Then he was taken to a military air base. Here Minov met with the testers and, as they say, gave them an interrogation with passion. Fortunately, knowledge of the English language has solved many problems and managed to do without a translator. By the way, the American side was pleasantly surprised by the Soviet guest. No one expected him to be so educated and erudite. And when Minov managed to make a good impression on representatives of the company's management, he began important negotiations. As a result, he was able, on favorable terms to both parties, to agree on the conditions for the purchase of a batch of parachutes. In addition, Leonid Grigorievich obtained a patent for their production in the Soviet Union. 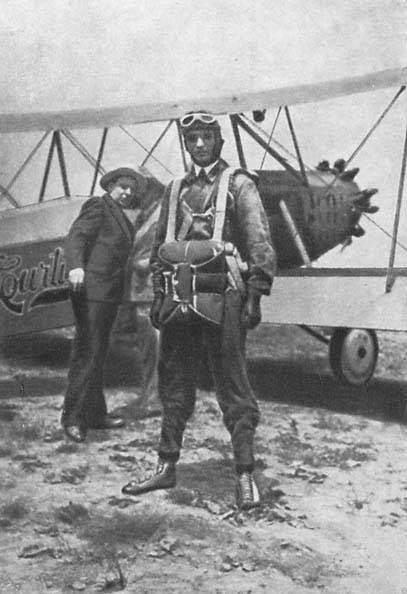 Having observed the testing of parachutes from the outside, Leonid Grigorievich asked for permission to try to cope with Irving on his own. Representatives of the company agreed. And soon Minov made his first parachute jump from a height of five hundred meters. He had no problems with “taming the beast”. Americans are so impressed that they decided to joke, inviting a citizen of the Soviet Union to take part in competitions that were held in California. Minov appreciated the joke and, of course, immediately agreed.

In the conditions of the competition it was said that it was necessary to make the jump from a height of four hundred meters. And you need to land in a circle with diameters of thirty-five meters. Of course, the Americans hardly thought that Minov would be able to fulfill this standard. However, Leonid G. did not just make a worthy performance among professionals, he took third place. At the same time, Leonid G. made the parachute jump just the second time. The American press was delighted.

When the time of the trip came to an end (Minov managed to make another jump), he received a certificate stating: “USSR citizen L.G. Minov received a course in inspection, care, maintenance and use of parachutes manufactured by the Irving parachute company” ... In our opinion, he is quite qualified for teaching the use of Irving parachutes, as well as for their inspection, care and maintenance. ”

After returning home, Leonid G. made a report on the trip to the United States at the headquarters of the Air Force. And his work was approved by the authorities. Curiously, after Minova, brigade engineer Mikhail Savitsky was also sent overseas. In the USA he spent a month during which he studied the technology of parachute production. And when he returned, Mikhail Alekseevich headed the first parachute manufacturing plant in the USSR.

The work went at an accelerated pace. And by the end of 1931, about five thousand parachutes were released. Moreover, one batch of seventy pieces was made according to the design of Savitsky himself. These parachutes were called PD-1. 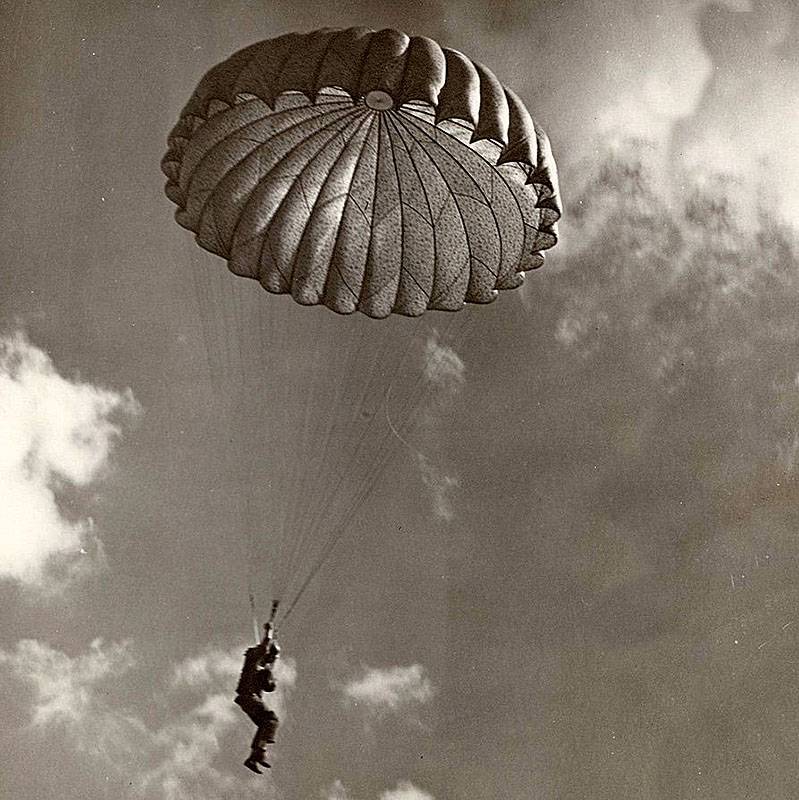 According to the memoirs of contemporaries, the country's leadership literally caught on the idea of ​​parachuting. Viktor Suvorov in the book “Icebreaker” has lines that well illustrate the situation in the country: “Parachute psychosis raged in the Soviet Union simultaneously with a terrible famine. In the country, children swell up from hunger, and Comrade Stalin sells bread abroad to buy parachute technology to build giant silk mills and parachute factories to cover the country with a network of aerodromes and aeroclubs to raise the skeleton of a parachute tower in each city park to prepare thousands instructors to build parachute dryers and storages to prepare a million well-fed parachutists, the weapons, equipment and parachutes they need. ”

And Leonid G. just doing his job. After an overseas business trip, he received a position that was not previously in the USSR — he became the first instructor in parachute training. He was to carry out gigantic work on the introduction of parachutes in aviation.

Soon the first training camps took place. They were conducted on the basis of the eleventh aviation brigade in Voronezh. Minov had to acquaint pilots with parachutes, as well as demonstrate their capabilities. Before the flight, the duty officer on the part Yakov Davidovich Moshkovsky asked Leonid Grigorievich to allow him to take the jump. Minov agreed and appointed his friend Moshkovsky assistant.

Parachute jumps were a great success. After which a few dozen aviators followed the example of Minov and Moshkovsky.

Then Leonid G. allowed Peter Ionovich Baranov to report. And he asked: “Tell me, is it possible in two or three days to prepare, say, ten or fifteen people for a group jump? It would be very good if, in the course of the Voronezh exercise, it became possible to demonstrate the release of a group of armed paratroopers for sabotage actions on the territory of the “enemy”. 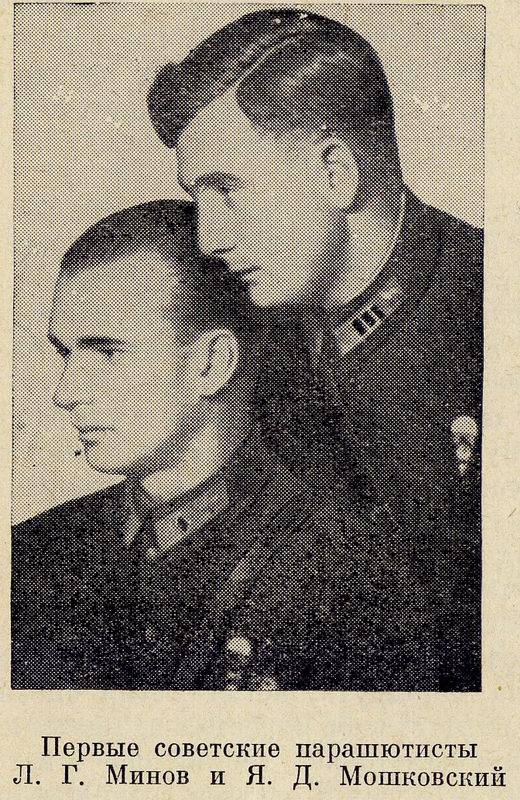 Minov did not disappoint the commander of the Air Force. On August 2, 1930, two groups of paratroopers, six in each, jumped. The first group was led by Leonid Grigorievich, the second - by Jacob Moszkowski. And this day was the birthday of the Red Army Airborne Forces.

On August 10, 1934, the Central Council of the Osoaviakhim of the Soviet Union adopted a decree conferring the honorary title Master of Parachute Sports of the USSR. The first one received a certificate, of course, Leonid G., the second - Moshkovsky.

Under the roller of repression

When the purge period began, Osoaviahim did not stand aside. On May 22, 1937, Chairman of the Central Council Robert Petrovich Eideman was arrested. During interrogations, “physical measures” were applied to him. And he could not resist, admitting that he was participating in the military-fascist conspiracy in the Latvian underground organization. But this confession was not enough. From him demanded "accomplices." And, in the end, Eydman negotiated two dozen people, thirteen of whom were employees of Osoaviahima. All of them were immediately arrested.

On June 11, 1937, Eydman was sentenced to death by the Special Court Presence of the USSR Supreme Court. And the very next day he was shot along with Tukhachevsky, Yakir and other military men.

Then the deputy Eideman Voskanov, the head of the Aviation Administration Tretyakov, the head of the Central Aeroclub Deutsch, and others came under the rink. Soon came the turn and Minova. He was also accused of military conspiracy. But they did not hurry with his arrest, having decided to wait a bit. Most likely, Yakov Moszkowski would have been sentenced to death, since he too had “plans”. But a tragedy occurred. In 1939, Yakov Davidovich passed a medical commission. The doctors' verdict for Moszkowski was sad: he was allowed to make a maximum of a dozen more jumps. Affected by numerous injuries he received during his service.

Successfully overcoming the mark of five hundred jumps, Moszkowski made another one. But the next one became fatal for him. That day the weather was too windy. But Yakov Davidovich did not stop it. He made his five hundred and second jump and was already preparing to sink into the water of the Khimki reservoir, when a powerful gust of wind blew it away. And Moshkovsky hit the side of the truck. 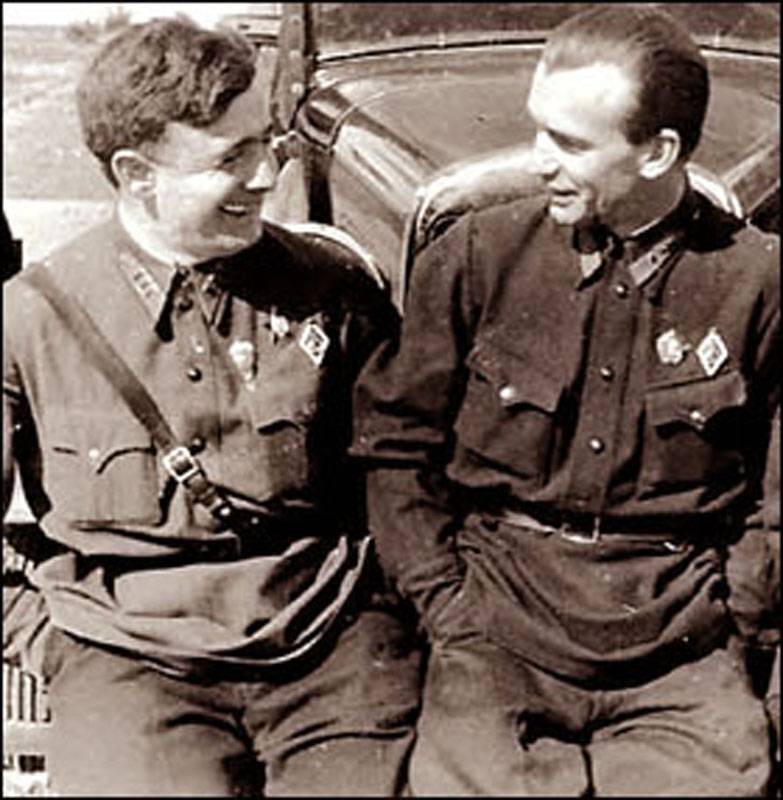 The resulting cranial trauma was incompatible with life.

In the fall of 1941, the roller of repression still reached Minov. Like everyone else, he was accused of conspiracy, but not sentenced to death. He was given seven years of camps and the same - links. This is what Mikhail Grigorovich recalled, with whom Minov was serving a sentence: “At the beginning of the 1940's, in the Son were the camp sites of Sevzheldorlag, the prisoners were building the North-Pechora railway. The column, to which we were transferred, was engaged in the construction of a railway bridge across the Synya River. Between the camp and the bridge was an earthen quarry, from which we drove the wheelbarrows and carried the soil on stretchers to the approaching embankments to the bridge under construction. The soil was clayey, very frozen and developed by hand very hard. We did not comply with the norms and received bread according to 400-500 grams. This period was very difficult, probably the most difficult during our time together with LG. stay in the North.

After six years, Leonid Grigorievich was deprived of all awards. But, despite all the difficulties that fell to the lot of Minov, he managed to return to freedom when his sentence had expired. And at the end of March, Leonid Grigorievich 1957 was reinstated in rights to awards. 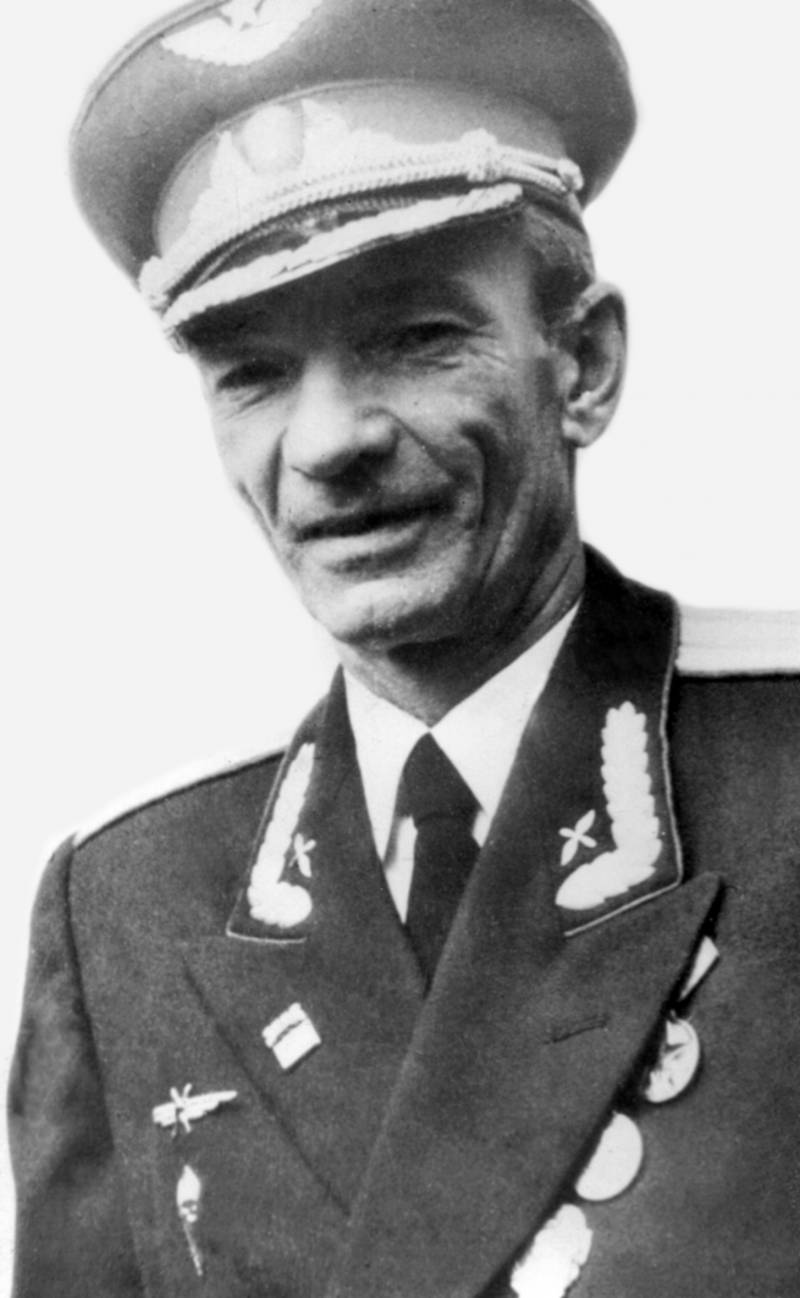 Minov continued to do what he loved. And for many years he headed the Federation of Aviation Sports of the capital. And he died in January 1978.