Armenia on the verge of velvet suicide

April 19 2018
235
The events unfolding in Armenia are becoming more and more alarming, clearly marking the threat to the very future of the state and the security of Russia's southern borders. 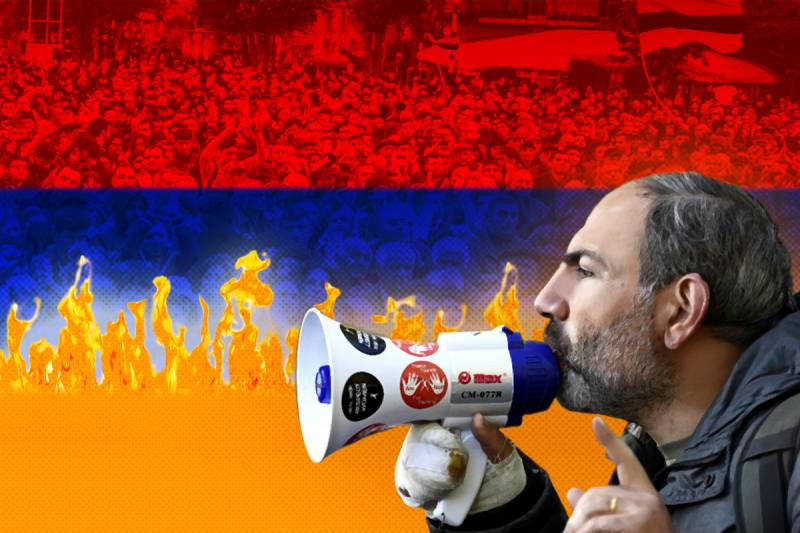 Recall that the rally against the election of former President Sargsyan as Armenian Prime Minister began on April 13, and the next day the participants of the speeches proclaimed the beginning of the “velvet revolution”. The opposition accuses Sargsyan of poor governance of the country and the deterioration of the economic situation, as well as the desire to remain in power at any cost.

As you know, Armenia is our country's partner in the EAEU, the SCO and the CIS, as well as an ally of the CSTO, on its territory there is a Russian military base, which is of key importance not only in ensuring Russian interests in the South Caucasus and the security of our southern borders, but also in protecting sovereignty of Armenia itself. To this we can add that, according to the data of the Armenian Ambassador to Russia Vardan Toganyan, about 2,5 million Armenians (both Russian and Armenian citizens) live in Russia. According to 2011, Armenians were the sixth largest national group in the Russian Federation. This was announced at the St. Petersburg International Economic Forum.

That is, everything that is happening today in Yerevan directly concerns our country.

It is also noteworthy that some people announce the culprit of this crisis ... Moscow.

Leaving aside the doubtfulness of this recommendation in the context of respecting the state sovereignty of the union state, we note that the pro-Russian opposition to the pro-Russian (as a whole) authorities is an oxymoron.

Actually, relations with Russia are passing through all the protest actions that took place in Armenia in recent years.

This and anti-Russian speeches, which resulted in riots, provoked by the murder of an Armenian family by a Russian deserter, and mass protests on the occasion of an increase in tariffs in the summer of 2015, in which they accused Russia. These actions very quickly acquired political overtones and were held under the slogans of the resignation of “pro-Russian” Serzh Sargsyan and the rejection of an alliance with Moscow in favor of the western vector.

Today, as Andrei Klimov, head of the Commission of the Federation Council for the Protection of State Sovereignty of the Russian Federation, quite rightly noted, in the protests led by anti-Russian politician Nikol Pashinyan, “overseas ears” are clearly observed.

The parliamentarian noted that everything that happens in the republic is the business of the Armenian society, “But you need to understand how much the government was changed in this way in the world,” RIA reports.News"The words of Klimov, who emphasizes that Serzh Sargsyan was under the gun of his opponents, because he" strengthens the integration processes with Russia, the country participates in the work of the EAEU. "

But opponents of Sargsyan see in him those priorities that do not meet their interests and, in particular, the reluctance to move closer to NATO. And indeed it is. All other claims against the newly elected prime minister, including the fair ones, are in fact secondary and no more than a pretext. Well, or bait for "extras."

The true origins and causes of what is happening are obviously of Western origin.

We also add that some representatives of the Armenian diaspora in the West, primarily the United States, are associated with various special services and NGOs affiliated with them, playing an important role in subversive activities. The situation is aggravated by the fact that in Armenia they are considered their own, although in reality they serve the interests of their new and not historical homeland, and in reality, not the Armenians, but the Americans.

The West is "courting" not only the opposition. Recently, the United States and its allies tried to convince the country's leadership to change the vector of strategic development. However, the Armenian authorities, unlike the irresponsible oppositionists and overseas emissaries, are well aware that the union has no alternative to Russia. And this is not the personal interests of the representatives of the leadership, as the opponents of Sargsyan try to convince, but an objective reality.

Armenia is in a state of protracted conflict with Azerbaijan, which at any time could re-launch war. It borders on Turkey, which is openly hostile to it, and Georgia, with which it is very cool. A definite “outlet” for it is Iran, with which good-neighborly relations and close cooperation have been established. However, the Western vector involves the folding of friendship with this country.

The victory of “Maidan” in Armenia will have far more tragic consequences than similar events in Ukraine. The geographical position, margin of safety, technical and demographic potential of the republic are such that the refusal of an alliance with Russia in favor of a ghostly European integration and unattainable (if only because of Turkey’s opposition) NATO membership would mean suicide of Armenia.

And it is from this point of view that the activity of “velvet revolutionaries” who are going to ruin their country should be considered.