Modernization of BMP-1: serial cars will appear by the autumn

April 19 2018
91
For reasons of economy, the Russian Ministry of Defense not only orders new armored combat vehicles, but also modernizes the existing equipment. One of the current projects of this kind provides for the renovation of the morally and physically outdated infantry fighting vehicles BMP-1. According to recent reports, the industry has already begun to carry out such work, and their first results will appear in the very near future. BMP-1 in the updated form will go into service in early autumn.


A few weeks ago, in early March, the Uralvagonzavod Research and Production Corporation talked about ongoing work and preparations for the implementation of current orders. According to official reports, in 2018, enterprises from the corporation were to begin assembling four types of armored vehicles. In the series were supposed to go Tanks T-90M and T-80BVM, BMPT tank support vehicle and upgraded BMP-1 infantry fighting vehicle. The first samples of equipment of all these types were planned to be sent to service over the next few months.

Previously, some details of the modernization project of the BMP-1 were clarified, and now new data has been published. The main ways to improve the characteristics of technology, as well as the timing of work, have become known. In addition, it was announced the start of work on the restoration of one of the experimental machines, which in the near future will become a museum exhibit.

BMP-1 in the original configuration

A few days ago, the press service of Uralvagonzavod announced the company's intention to restore the prototype model of the BMP-1, known as the 765 Object. The armored vehicle, intended for passing various tests, was built in 1974 by the Chelyabinsk Tractor Plant. For years, the car participated in various tests and thus ensured the development of its project. Over the years of testing and experimentation, the 765 Object has developed its life and could no longer be used for its intended purpose.

In 2013, the experienced "765 Object" changed owner. The unusable car was handed over to the corporation Uralvagonzavod. In connection with the development of the resource and the impossibility of further work, the armored vehicle could be sent for recycling. However, it was decided to save this prototype. Moreover, it was offered to repair and restore it, and then send it to the museum. The specialists of Uralvagonzavod have already studied the design documentation and carried out part of the restoration work. In particular, restored appearance of the chassis. In the foreseeable future, other elements of the machine will be restored.

In this case, we are talking about restoring an experienced "765 Object" with the return to its original form. Serial BMP-1, in turn, within the framework of the project adopted for implementation, will acquire a new look and gain new capabilities. The current modernization project involves the repair and restoration of some units with simultaneous replacement of others. The main goal of this project is to increase the combat capabilities through the use of a modern armament complex.

Upgraded BMP-1 must maintain the standard body, power plant and chassis. Thus, they will still have a full range of bulletproof protection with enhanced frontal projection. UTD-20 diesel engine with HP 300 power. allow you to maintain the desired mobility. The tracked undercarriage will provide for overcoming various obstacles, and in addition, it will retain the propulsion functions for moving through water. With the exception of certain features, the chassis meets current requirements and can continue to serve.

In the recent past, domestic enterprises repeatedly proposed this or that version of upgrading infantry fighting vehicles, but more often they did not provide for increased protection. Whether the upgraded BMP-1 will receive any hinged protection that complements the body's regular armor was not specified.

One of the main claims to the infantry fighting vehicles BMP-1 associated with obsolete weapons. The main weapons Such a technique is an 73-2 “Thunder” 28-mm smooth-bore gun, which no longer meets current requirements. In this regard, all new projects for the modernization of such combat vehicles provide for the replacement of weapons or combat compartment as a whole. As follows from recent reports, the current update of the BMP-1 also provides for the rejection of the outdated gun.

In the recent past, information was published on upgrading infantry fighting vehicles through the installation of a combat module B05YA01 "Berezhok" with cannon-machine-gun and rocket armament. In addition, until a certain time in the context of the update BMP-1 featured system "cleaver". 16 APRIA RIA News published other information on the rearmament of armored vehicles describing the current state of affairs in this area. According to his data, received from an unnamed representative of NPK Uralvagonzavod, instead of the standard tower, BMP-1 will receive a combat module borrowed from the BTR-82A armored personnel carrier. 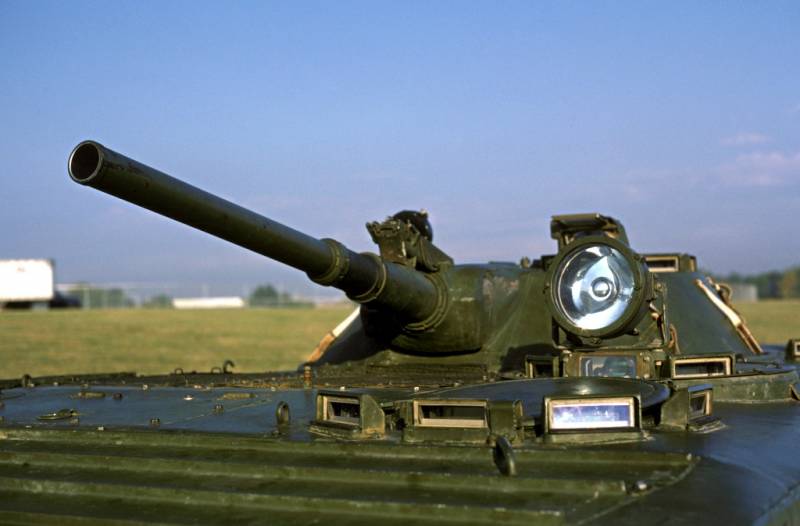 Tower with 73-mm tool to be replaced

Thus, on the pursuit of the roof of the hull instead of a closed tower with internal placement of weapons will be located armored cap with external means of mounting a gun and a machine gun. The 2A72 30 automatic caliber mm gun will remain on the main swinging unit. The PKTM rifle caliber machine gun will be used as an auxiliary weapon. Also, the new combat module carries a set of smoke grenade launchers.

The equipment, borrowed from an armored personnel carrier, is equipped with a TKN-4GA combined sight, providing search and shelling of targets at any time of the day. The fire control system includes a two-plane stabilizer. Weapons can use ammunition of various types, suitable for defeating those or other purposes. In this case, the fire control system includes a channel for remotely detonating small-caliber artillery shells.

Such a re-equipment gives the upgraded BMP-1 notable advantages over the machines of the original configuration. The range and effectiveness of aimed fire increases in a perceptible way, as well as the possibility of attacking ground and air targets, including those with large elevation angles of the gun. In fact, in terms of firing characteristics, the updated BMP-1 becomes a direct analogue to the newer BMP-2 or the BTR-82A armored personnel carrier, which served as the source of components. At the same time, it retains high mobility and performance.

RIA Novosti, citing a source in the defense industry, indicates the main consequences of replacing the combat module. Tests have already been conducted, and the prototype with the new weapons showed itself from the best side. The chassis of an infantry fighting vehicle is heavier, wider and more stable in comparison with the BTR-82A, and therefore when fired, this technique hardly sways. This has a positive effect on shooting accuracy and effective range of fire. In addition, such a machine, having a tracked chassis of high maneuverability, can work in some combat formations with tanks.

According to RIA Novosti, the modernization program of the existing infantry fighting vehicles BMP-1 with the replacement of equipment and the installation of new weapons will give real results in the near future. Apparently, the required work has already started, and now you can wait for the first updated machines to go to the combat units of the ground forces.

The restructuring of the cash equipment will be completed in the very near future. Soon the first batch of cars will go to the tests, which are expected to be completed before the summer. After solving some issues of one kind or another, this technique will pass acceptance and will be returned to service. The transfer of the BMP-1 of the first batch must pass before the beginning of autumn. This will be followed by new works on the repair and modernization of existing combat vehicles, as a result of which the army will receive several more lots of equipment.

The volume of the existing order, the timing of its implementation and the cost has not yet been specified. Apparently, Uralvagonzavod NPK will continue to work for several years, and during this time dozens or hundreds of armored combat vehicles will be updated. However, we can not exclude a higher rate of work, allowing you to remake a greater number of equipment. 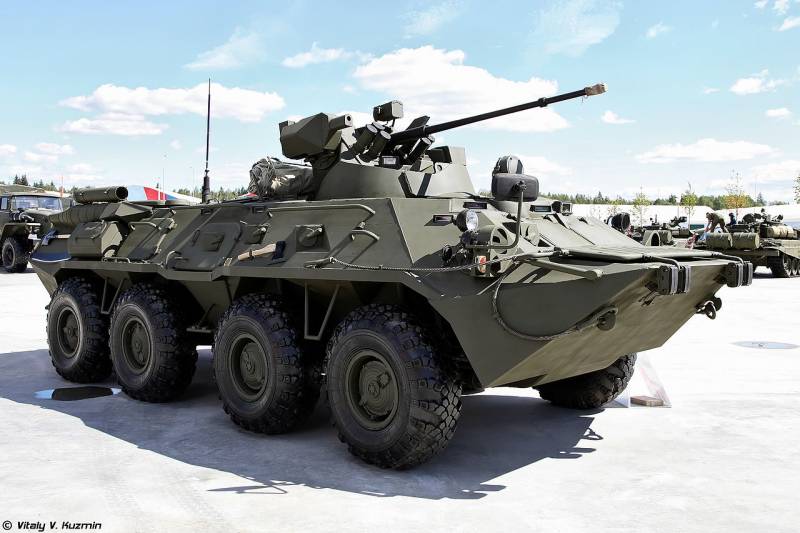 A significant number of obsolete or obsolete infantry fighting vehicles of early models remain in service with the Russian army. For one reason or another, such equipment no longer meets modern requirements, as a result of which it needs to be modernized or even replaced. Wanting to get a certain savings, the Ministry of Defense is choosing the first path to the development of the fleet of vehicles. It provides for the preservation of existing machines with their simultaneous alteration in accordance with the new requirements.

However, some specific features of the proposed project raise questions. Starting with the BMP-1, all domestic infantry fighting vehicles carried anti-tank missile systems of various types. A new modernization project involves the installation of a combat module from the BTR-82A, which does not have this capability. At the same time, the Berezhok module, as well as other similar systems proposed for the modernization of domestic armored vehicles in the past, is completed with standard launchers for several missiles in containers. Why it was decided to abandon the rocket armament, which allows attacking protected targets at long ranges, is unknown.

Apparently, this choice of combat module is associated with the customer's desire to save on production. The BTR-82A armored personnel carriers and units for them have been mass-produced for a long time, and are also well mastered by the troops. However, alternative developments are also in the series, and they are planned to be used to update other equipment. So, last year it was argued that the already mentioned combat module "Berezhok" would be used in the modernization of existing BMP-2.

It is curious that, as a result of the implementation of the new project, Russia will join a kind of club of countries that have modernized their BMP-1 by replacing weapons. Previously, a number of such projects were created by order of several foreign armies, who also considered the standard weapon of such equipment unsuitable for use in modern conditions. The new Russian project adds to the list of options for modernization, which is likely to grow in the foreseeable future.

Despite the considerable age of such equipment, there are still a significant number of infantry fighting vehicles BMP-1 in units and at the storage bases of the Russian army. The disposal and disposal of these stocks has a definite meaning, but the military department found another way to get rid of obsolete samples with maximum benefit. A certain amount of morally and physically obsolete armored vehicles will undergo modernization, the results of which will be able to continue service along with newer models. The first BMP-1 with a new weapon will go to the army before the beginning of the next autumn.