Time to blast the perimeter?

April 18 2018
76
The events in Armenia, which synchronously coincided with the actual defeat of the West in Syria, can mean a swift shift in the emphasis of its geopolitical strategy with full preservation of its anti-Russian paradigm. 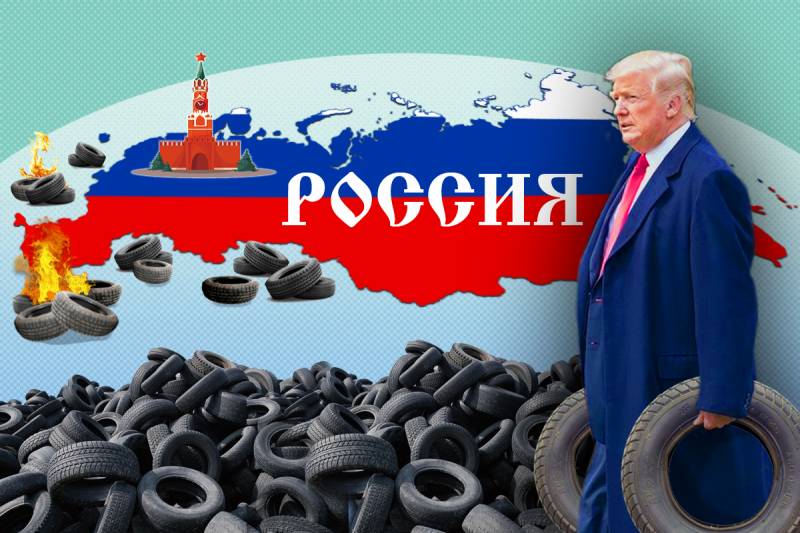 This article is a logical continuation. my previous materialin which it was stated that the attempt of the pressure of the West on Russia by forcing military-political tensions around Syria rested against the reinforced concrete fence of the impossibility of further forceful escalation. Moscow in this area has clearly defined the framework for tolerant behavior of the West and its unconditional readiness to resolutely prevent any of its inclinations to go beyond these limits.

However, the strategic deadlock on the Syrian track does not mean that the West (first of all, the United States), having found the limits of its capabilities in this direction, will not try to catch up on others.

Moreover, there is no indication that the algorithm of the western policy in relation to Russia is undergoing any changes. The escalation of absolutely fantastic accusations against Moscow of all mortal sins continues. Western leaders, who took Hitler’s propaganda minister with his principle “A lie must be monstrous to be believed!”, Seem to have already outdid their ideological predecessor.

Unceremoniously arrogant claims against the Russian Federation, not supported even by the appearance of legitimate reasons, continue to pour in like a sack full of holes. On the eve of the former G-8 foreign ministers in an ultimatum form demanded that Russia "urgently answer questions related to the incident in Salisbury." The measure of hypocrisy of the authors of this "presentation" is beyond description. Especially since the repeated requests of Russia itself to provide it with at least some information about this incident or to allow it to participate in the investigation were rejected literally from the threshold and without any explanation.

The West’s utter reluctance to admit the right to the ultimate truth for anyone other than himself generates harassment similar in cynicism in the case of the same Syria. For example, the US representative in the OPCW agreed to the point that he accused Russia not only of supporting the organizers of the mythical “chemical attack” in this country, but also of the absence of evidence of the use of chemical weapons! That is, the West cannot provide the world with any evidence of its regular, already in a row, chemical lie, again, Russia is to blame, which, they say, destroyed all the evidence. And the West itself, as always, is an innocent little sheep, which bloody Putin humiliates and spreads mercilessly.

Thus, Russia is to blame by definition - always and in everything. And so it will be exactly as long as she does not fall on her knees before the West and swear allegiance to him. And since this will never happen, there will be no end to the Western accusatory lie about Russia, which serves as a justification for its all-round, truly hybrid aggression against this country. Which has been openly in progress for four years now, since the moment of its armed seizure by mercenaries of Ukraine, in punishment for Putin’s attempt to create a Eurasian Union.

The West feels extremely comfortable in the role of the undivided master of this world and is absolutely not going to give up this comfortable exclusive status for it. Therefore, any attempt by any non-Western country, for example, the same Russia, to declare some of their rights, will continue to be perceived in the West with "noble indignation." And such a good-for-nothing country will in every possible way be infringed upon, denounced and punished.

For it is worth only the West to recognize itself as one of many equal on this planet, as the foundation of its parasitic prosperity immediately shakes and soon collapses. And he categorically disagrees. Because they do not just want to live, but want to live well, and preferably at the expense of others.

Therefore, there is no reason to talk about the fundamental change in the paradigm of Western geopolitics, which is its physical and even biological essence.

And if he had a hole in Syria, then this is only a reason to adjust Western plans in relation to Russia in order to increase pressure on her in other, seemingly more promising areas.

It is with this adjustment and with nothing else that the events that are taking place in Armenia today should be linked. Where has long been well-lured by the West and trained for street atrocities is quite tame for him "opposition", which is essentially no different from the Euromaidan subservient overseas State Department from the city of Kiev. And their leaders, most likely, studied at the same seminars.

The synchronism of the American "geopolitical adjustment" and the current Armenian explosion speaks for itself. Armenia was chosen, of course, not by chance. It was there that the most suitable domestic political situation arose at the moment, in which Washington can play well. And this opportunity, of course, immediately seized.

But the fact that the first "played" Armenia, is not important. It is very likely that this is nothing more than a special case of a general shift in the US geopolitical accents, which are in a hurry to recoup their Syrian knockdown. In the States, they immediately recalled that Russia has a very unstable geopolitical perimeter. A measure of the explosiveness of which the United States can adjust depending on its own needs. Moreover, they have long and densely worked in the countries of this perimeter in terms of their preparation for synchronous or sequential detonation if necessary. And now, it seems, such a need has arisen.

Calculation in the case of the same Armenia is done on maximally fanning the internal conflict with a view to drawing Russia into it, which in no way can remain indifferent to the fate of one of its closest allies. The situation, which will definitely require the intervention of the Russian Federation, especially if Azerbaijan is also activated with its eternal Karabakh issue.

Thus, the West receives in exchange for a dead-end Syria a very promising anti-Russian combination for it in the Transcaucasus. Moreover, one in which he, unlike Syria, may not directly participate at all, but only clap his hands, encouraging the participants in this fight. Favorite occupation of the West - to push other people's foreheads and skim the cream.

And this will be the second activated anti-Russian center. After the Ukrainian, which the West is always under steam. And it can also be warmed up at any suitable moment.

Further, in order of succession of undermining the Russian perimeter, of course, goes Moldova. Here, too, the alignment is such that the current pro-Western and pro-Romanian rulers can remain in power only through provocations, the use of force and the outbreak of war. And if the West considers that the time has come for this, it will rush along the banks of the Dniester. And the time of the current political elite of Moldova is really running out. On the nose is the parliamentary elections, which do not bode well for the local non-Romanians.

Other potential hot spots along the borders of the Russian Federation may be activated secondarily. First of all, it is Kazakhstan with its aged president, who is just now actively sawing the branch on which he is sitting, clearly distancing himself from Russia. Apparently, the sad experience of other "side friends" of the West, whom he had long ago squeezed out of the world in various ways, did not teach anyone anything.

As for Kyrgyzstan, outwardly everything seems to be calm there. But about the quiet pool and the one who lives there, everyone probably heard. Especially about such a whirlpool, in which American performances of the type of “velvet revolutions” already happened and even lodged an American military base. And I did not have to hear anything that America would ever leave any country where she had previously entered.

Another elderly lover to sit on two chairs reigns west of the borders of the Russian Federation. And not the fact that the sunset of his reign will be as languid and serene as the previous quarter of a century.

The main charm of all these smoldering, inflaming and only maturing conflicts from the point of view of the West is quite obvious. Unlike Syria, he doesn’t have to risk anything, throwing rockets or dropping off the marines. All this is just required in Syria. And that is why there the western spit found a Russian stone. And there was a strategic dead end. In the case of the Russian perimeter, it is enough just to use “soft power”, which the West has in plenty. And send money bags to the right addresses. What, then, and they will print the money exactly as much as they ask.

Thus, there can be no talk of a change in the basic anti-Russian paradigm in the West. But after a clear failure in Syria, the emphasis is beginning to shift more and more clearly to the near perimeter of Russia. The task is quite obvious - to link Moscow with an almost endless chain of border conflicts on its own periphery. And thereby create optimal conditions for the curtailment of Russian activity throughout the rest of the world. Where the West will once again become the master of the situation. As in such cases in Hollywood films it is customary to say: “A brilliant plan!” It is not known just what Putin thinks about this.