France and Germany will jointly create a sixth generation fighter

April 18 2018
45
France and Germany decided to join forces in the creation of a new multi-purpose combat aircraft of the next generation. Last Thursday, 12 of April, 2018, the meeting of the defense ministers of the two countries took place in the German capital, after which the first comments appeared about the imminent start of work on the creation of a new combat aircraft. Although the development of pan-European models of combat technology is traditional slowness, take the creation of the fourth generation Eurofighter Typhoon fighter, the development of a new aircraft always attracts attention, especially when you consider the fact that the British and French are going to skip a generation. The fighter announced by them will belong immediately to the sixth generation of combat vehicles.


There is no reason to doubt that the Europeans will succeed in creating a completely competitive combat aircraft of a new generation. The only really interesting question at the moment is by what time they will be able to create a new combat vehicle. For example, work on a promising fourth-generation European fighter began in Europe at the end of the 1970s. In 1986, Eurofighter GmbH was founded, which became a consortium of the Alenia Aeronautica company in Italy, BAE Systems in Britain, and EADS, the European aerospace industry corporation (today it is Airbus Group). The first flight of their new fighter took place in the 1994 year, and the serial production of the aircraft and the start of operation of the new combat vehicle occurred in the 2003 year.

To date, European countries (not taking Russia into account) produce three types of 4 generation fighters: Eurofighter Typhoon (Great Britain, Germany, Spain, Italy), Gripen (Sweden) and Rafale (France). At the same time, the EU is openly saying that the development and production of a new generation fighter will be too expensive for each individual state, so they decided to conduct the development of a new combat aircraft by joint efforts.

All of the above aircraft have export potential. At the same time, the number of Eurofighter Typhoon fighters built exceeded 500 units in April 2017, when the 500 aircraft was rolled out, which was transferred to the Italian Air Force (as of February 2018, the number of aircraft released exceeded the 533 instance). This fighter is in service with the Air Forces of Germany, Great Britain, Italy, Spain, Austria, Saudi Arabia. Contracts for delivery to Qatar, Kuwait and Oman have been signed. It is safe to say that the European countries today do not have any special problems with the joint production of the 4 generation fighter and its export potential. 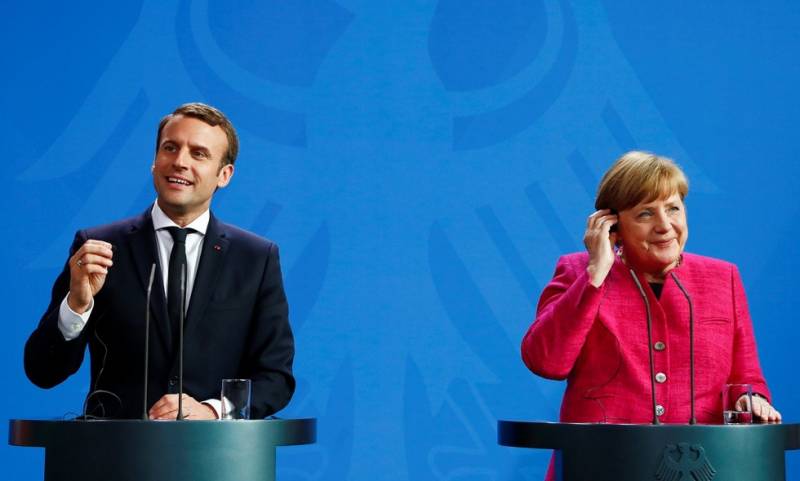 The fact that Germany and France thought about creating a promising combat aircraft, it became known last year. In July, 2017, during the meeting of German Chancellor Angela Merkel and French President Emmanuel Macron, this was announced for the first time. It is assumed that a promising European combat aircraft will replace the 4 generation fighter Eurofighter Typhoon and Dassault Rafale.

Here are the terms of the appearance of a new fighter called very remote. According to a rough estimate, the first flight of a new fighter will occur no earlier than 2040 of the year. It is assumed that the new aircraft will not belong to the fifth generation of machines, but immediately to the sixth generation. It is known that the project for the creation of the aircraft includes all the leading European aircraft manufacturing concerns and manufacturers of various aviation equipment, including: Airbus, Dassault Aviation, MBDA, Safran, Thales.

In the future, the project of creating a new fighter should become multilateral, the way the Eurofighter Typhoon project was, but British firms have not yet been formally invited. At the same time, the initiators of the work emphasize that in the future they are ready to expand the list of program participants to “strengthen the base” of the project. At the same time, at this stage, Berlin and Paris signal that they are not ready to allow a significant impact on the project, its ideology and technical appearance of the car of specialists from third countries, but in the future they are ready to attend to the creation of launch markets for the new aircraft in the Air Force. ".

The announced project is not the first attempt by European states to create a promising sixth generation combined-arms aircraft. What the French now call Système de Combat Aérien du Futur was previously called the Future Combat Air System. It was about the development of a promising aviation combat complex, which was to come to replace the aircraft Eurofighter Typhoon and Dassault Rafale. The project partners were France and the United Kingdom, and the amount of expenses already at the first stage of the program was estimated at 2 billion dollars. 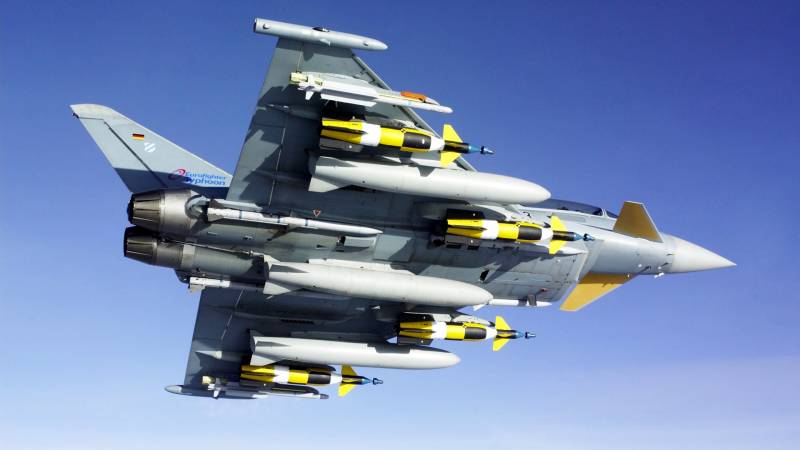 Eurofighter Typhoon
Airbus held a presentation of the FCAS program in 2017. This program included the development of a whole family of combat aviation equipment - in addition to the fighter itself, these were unmanned support vehicles, refueling aircraft, a flying command center, and also orbiting satellites. The main qualities that the sixth generation aircraft should have highlighted included innovative types and weapons systems (including laser combat systems), aircraft invisibility for radars, and the ability to use the most remote control of the aircraft (implementing an unmanned control model). It is planned that an agreement to launch a joint European program will be signed before the end of April 2018, and eventually other European countries will be able to join it.

It is noteworthy that France formally did not abandon the joint project with Great Britain, declaring its transfer to a “parallel process”, stressing that work in this direction can be useful. It is worth noting that France from the turn of the 2000-x and 2010-s has been active in the military-political field, having formed a separate bilateral military alliance with the UK (this caused discontent in Germany, where they used to see the role of Paris).

At the same time, Brexit somewhat downplayed the prospects for the implementation of French-British projects in the aircraft industry, although it is still too early to write them off. France is trying to diversify its risks, and in Germany the choice is not so great. In Berlin, at the present time, they are seriously occupied with the question of how to replace the Tornado fighter-bombers, which should withdraw from the Luftwaffe at the beginning of the 2020-s. It is planned to change them either to a new batch of fourth-generation fighters Eurofighter Typhoon (this decision is lobbied by politicians and industry) or to fifth-generation F-35 fighters purchased in the US (the German military insists on this, which has already caused a scandal in Berlin with threats of resignations) .

The announced attempt to create a new fighter looks like another attempt to implement the Eurofighter project, but with a new set of program participants. However, last time, although the aircraft was created and recognized as quite successful, it never became a single European fighter. Then it was France that quarreled with the concern participants. The result was the emergence of the British-German-Italian-Spanish Eurofighter Typhoon, and Paris presented its own Dassault Rafale. Both cars compete with each other in the international market, reducing the share of each other, and the appearance of two different fighters increased their cost in mass production (taking into account the cost of their development). 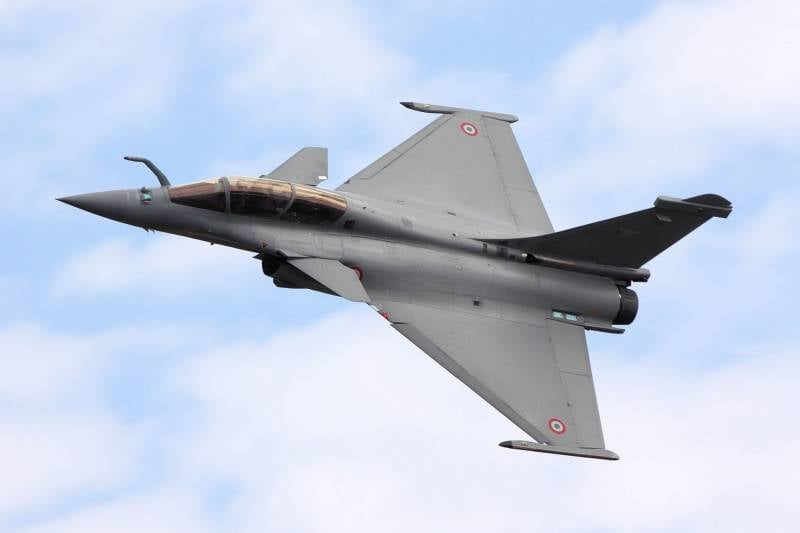 Dassault Rafale
This time, most likely, the UK is not already in the pool of developers. True, London has a military-technical choice. First, the United Kingdom already purchases fifth-generation F-35B fighters in the United States, and secondly, the country that is Washington’s closest ally can count on some preferences under the program of the sixth generation American combat aircraft. Earlier, London announced that it would acquire fifth-generation F-138B fifth-generation X-NUMX multi-purpose fighter jets for the Royal Air Force and the Royal Navy in the United States. In particular, the F-35B fighter jets with the possibility of a shortened take-off and vertical landing will become the main striking force of two newest British aircraft carriers of the type "Queen Elizabeth".

The capabilities of the sixth generation fighter

The fifth-generation fighter jets with their advanced information systems, cruising supersonic flight speed, low radar visibility and integrated radio-technical complexes did not even have time to get comfortable in the sky, as sixth-generation planes already loomed on the horizon. On their appearance and features today, for the most part, it remains only to guess. No details about the promising fighter developed by Germany and France are also still unknown.

Therefore, we can only talk about tactical and technical capabilities, as well as the appearance of the new aircraft. However, individual areas of development of combat aircraft can be identified now. It is absolutely possible to say that the aircraft will be created both in manned and in unmanned version, it will be possible to fly a fighter optionally from the ground. The direct continuation of this feature is the possibility of incorporating the aircraft into the combat network: when the aircraft are combined into “flocks” operating in a single information space. It is also planned that manned aircraft will be able to “drive” robots. 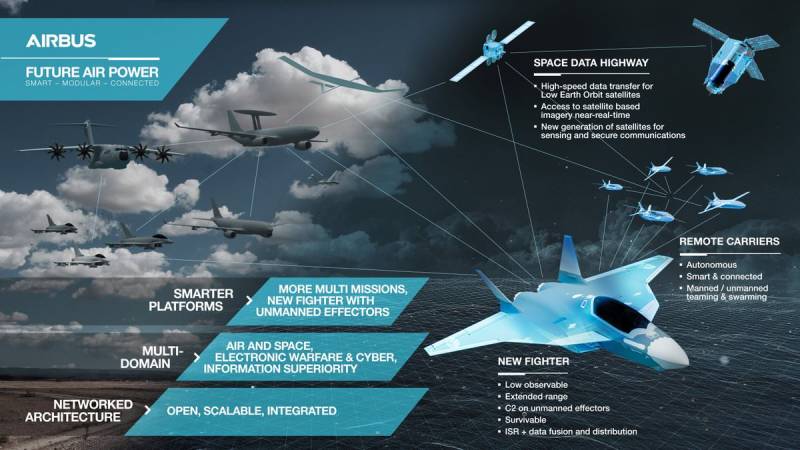 New Fighter as a key element of the Future Combat Air System, concept from Airbus
Also among the features of the sixth generation of machines include - the presence of hypersonic flight speed and super-maneuverability. To these features, Vladimir Mikhailov, head of the military aviation program of the KLA, added in June 2016 of the year also the wide use of composite materials. Of course, the new combat vehicle will have to be multifunctional and possess advanced stealth technologies, extreme secrecy (in the radar and thermal ranges) should be one of the main features of the new aircraft.

Probably, the sixth generation fighters will become two-medium, that is, they will be able to operate equally effectively in the atmosphere and in near space. Also among the features of promising aircraft include the possibility of changing the form in flight and the use of "smart materials". Separately, you can select weapons, which include the prediction of weapons directional action. We are talking about, at a minimum, the appearance of airborne combat lasers and powerful electromagnetic radiation generators, which can hit the onboard equipment of enemy aircraft.

Ctrl Enter
Noticed oshЫbku Highlight text and press. Ctrl + Enter
We are
How was created "Eurofighter"An-12 in Afghanistan
Military Reviewin Yandex News
Military Reviewin Google News
45 comments
Information
Dear reader, to leave comments on the publication, you must sign in.