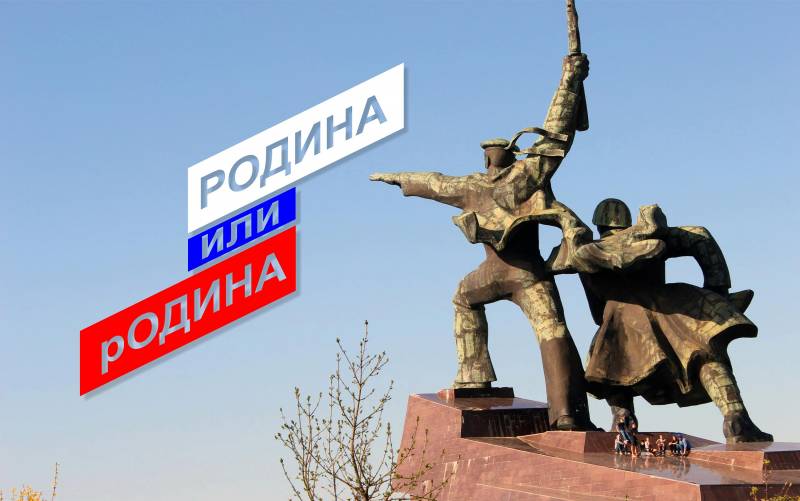 I live in Sevastopol for three years. And for three years I have been observing the same picture: well-dressed children ride skateboards on the base of the monument to the Soldier and Sailor. Once I got tired of watching - I approached them and asked why they preferred a monument to the Great Patriotic War to all skate parks. Creepy историяI will say right away.

To begin with, let's remember the history of the creation of the monument.

In the distant 1972 year, by order of the Central Committee of the CPSU and the Council of Ministers of the USSR, military and civilian architects began designing the memorial complex at Cape Crystal, which was to consist of a second defense museum in Sevastopol, a park with a paved square, a monument to the Soldier and Sailor, the Eternal Flame. The area of ​​the future memorial complex was 6 thousand square meters, and the cost of the project - 6 million Soviet rubles. Such complexes were to be built in each hero-city. And all the cities-heroes, except for Sevastopol, they are. 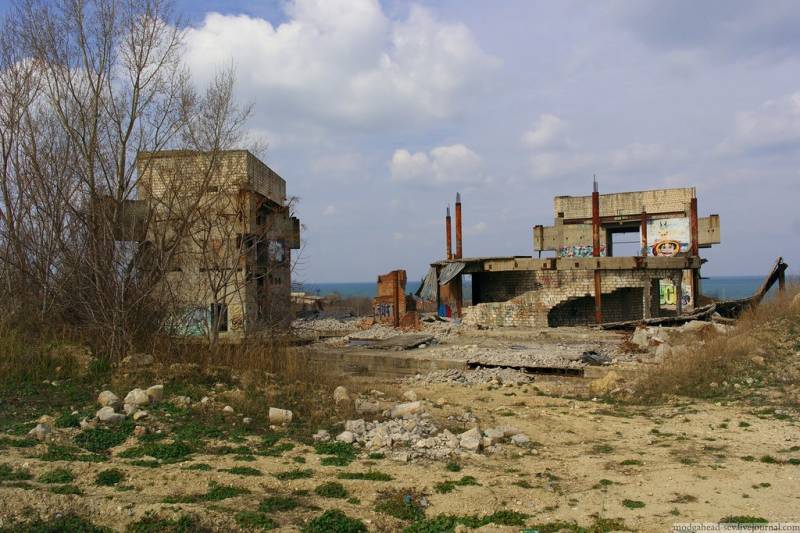 Destroyed building of an unfinished museum

For several years, the ground was explored, the project was changed several times and already in 1983, they began to build a pedestal under the monument. By 1989, the monument was completed by 72%. Then the Soviet Union ended, the money ended and the desire to return to the construction of the memorial complex ended. In 2006, Ukraine nevertheless completed the construction of a monument to soldiers of 41 height and the adjacent square, abandoning the idea of ​​continuing to build a defense museum.

The unfinished museum was conceived by the project of the Kiev Design Institute in the form of a three-beam structure, the metal spans of which in recent years, Ukrainians were cut and put into scrap metal. A similar fate at one time comprehended any military object of the Crimea - including the “221 Object” (Laspi) and the casemates of the 35 battery.

View of the unfinished museum from the satellite: 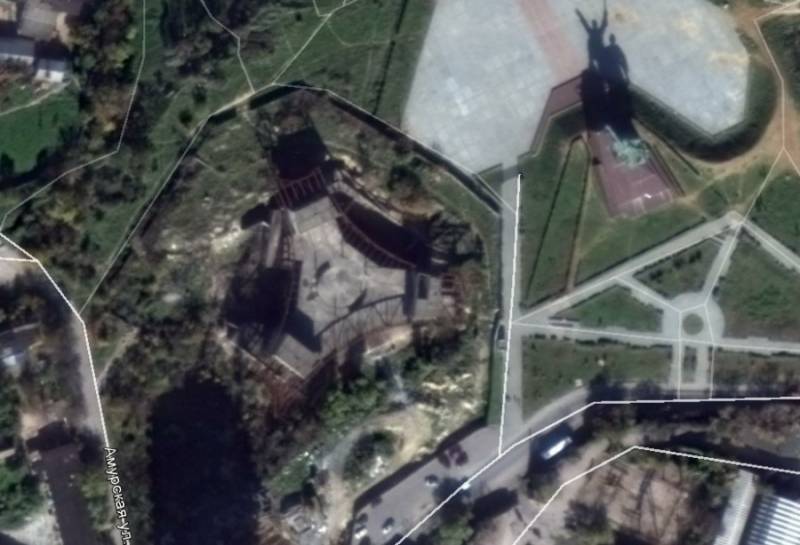 Discussions about the patriotic upbringing of new generations do not abate in a patriotic environment, having recently turned into a chewed-up chewing gum. After the collapse of the Soviet project of the Komsomol and the pioneers, the minds of Russian children and adolescents were free for new information. Democratic Russia was not able to formulate any idea for its young citizens, since it abandoned ideology as such. A recent video of B. Yeltsin’s confession in the US Congress in 1992, where he asks the Lord to bless America, vividly illustrates the country's loss of sovereignty and national idea.

According to the theory of emptiness of Grigory Perelman, the whole point is what filled the voids - cosmic and social. We are interested in exactly social. So, after 1991, in the process of educating the younger generations, voids were formed, which began intensively to fill the mass media belonging to Western "partners." They began to act according to the principle “if there is no ideology in your country, then the neighboring country will invent it”. As a result, the term "Pepsi generation" appeared. This is about children brought up by Western culture. Consumption entered modest Russian homes. The Pepsi generation gave birth to children brought up by American films about transformers and super-heroes, while parents were looking for answers to the questions “where is the best time to relax: in Thailand or Bali?”

The children grew up and wanted to influence the political process. And in 2013, the Maidan began, and in 2017 - the actions of Navalny, in which children with brand new iPhones in their hands demanded justice. The meaning of the term "justice" they put into their heads Western culture - to abandon all Russian and dissolve in all Western.

Watching the headlines News. “The girl climbed onto the monument to the soldiers-liberators”, “They will be fined for photos of those sitting in the helmet of the monument“ Thirst ”in the Brest Fortress,” “Teens fried sausages on the Eternal Flame”. I am looking for discussions on the network, I find. “Why do we need to remember the Great Patriotic War?”, “Grandma attacked children climbing the monument”, “Russians begin to forget about the Second World War.” In the last discussion, statistics are given, according to which more than half of the teenagers surveyed could not correctly say who started the Second World War and, as a result, chose the option “USSR”.

Mikhail Lomonosov simply said about such people: "A people who do not know their past have no future." Despite the blurred statements, every day his horror is increasingly felt physically.

It so happened that for the time being, for the Russian people, victory in the Great War is one of the few foundations of popular ideology. And every sensible person realizes that with the loss of this foundation, the future of independent Russia will become unattainable. Not a single victory of the VKS in Syria will make sense without the orientation of the young Russians towards their country. But just with this orientation is now a big problem. 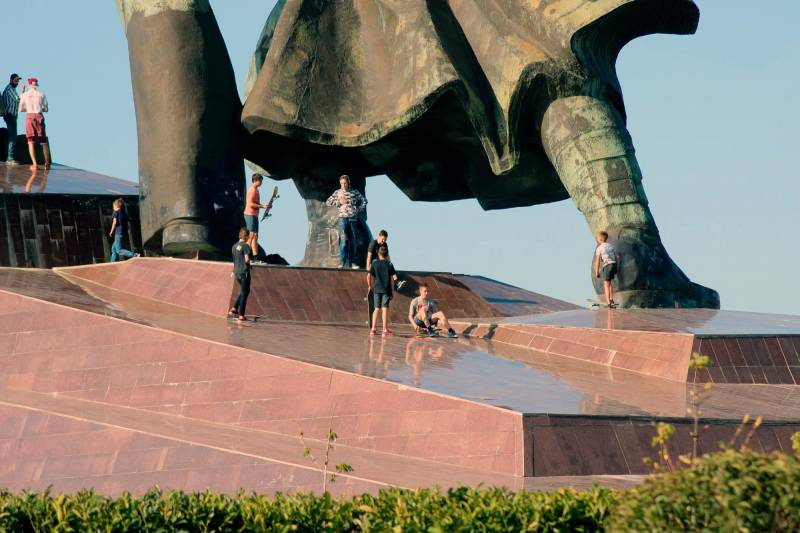 Let's go back to the kids on skateboards. Let's see what the extreme sports subculture is. The skateboard was invented by the Americans in the 50s. The board with wheels has become a continuation of the surfing culture. As I delved into the philosophy of surfing, I found articles with headings like "Surfing is the art of being happy." The Hawaiians who invented this sport knew a lot about rest. A shirt in flowers, shorts, a wave board are simple ingredients for happiness. Remember, in Nosov's "Dunno on the Moon" about the island of entertainment: "The island of entertainment turns us every day, every hour into nice rams and sheep <...> Have fun more and more, have fun, eat and drink, and never think ever again! "

No you "labor ennobles." Labor is about a collective, about a commune, about socialism. Skating on the board is a purely individual happiness, an egoistic attempt to enjoy life alone. I have no negativity to skateboarding. I try to understand the physics of the process, to find and feel the meaning of this activity. Not coming out yet.

I emphasize the guys (12-15 years) spoke competently and judiciously. They explained that no matter how many parks for them were built, they would still ride on the monument, because it is necessary to change the location, there is some sacred meaning in it. In discussions of the quality of Sevastopol skate parks, the children aspirated about American parks that they saw on the Internet. By the way, during the skating they listened to American music from a small speaker.

I asked them if they go to the monument for the day. fleet and May 9th. Half said that they walk, but the other half did not, because "they are not interested and boring."

After talking with children on skateboards, I realized that they had good, wealthy families, in which, apparently, questions about the significance of military memorials are not discussed. The guys are nice, smart. The problem is that no one ever offered them to think about whether it is worth using the monuments of the Great Patriotic War as a roller coaster. I am afraid to suggest that little was said about the war with them. By providing children to the Internet, parents, as it were, reduced the list of their responsibilities in the upbringing process, curtailing their participation in the fate of their offspring until they sustain their livelihoods.

Guided by the principle of "bread alone", modern parents decided for themselves that the child himself would find the idea, the ideology of his life. This is the main mistake. American culture, as an evil wizard, is happy to clean up such "unfilled" children, defining their ideology at their discretion. It takes quite a bit of time for the Russian child to become an adherent of the Western consumption model. In a few years, he will give birth to his children, who will no longer be Russian in ideological terms. One has only to infect the social cell with the poison of consumerism, by launching the process of de-Russification, as a growing family of cosmopolitans of all nationalities is replenished with a whole family.

Everyone decides for himself how good or bad it is. Each president sooner or later faces a challenge - to create their own ideology or to use Western manuals. Each society either creates a request for a state youth organization, or disclaims responsibility for its future. While the choice is not made - it is in our hands.