April 17 2018
39
Historical the period of boundless economic management in the world of the Anglo-Saxon “world hegemon” after the failed “punishment” of Syria can be considered finally completed. 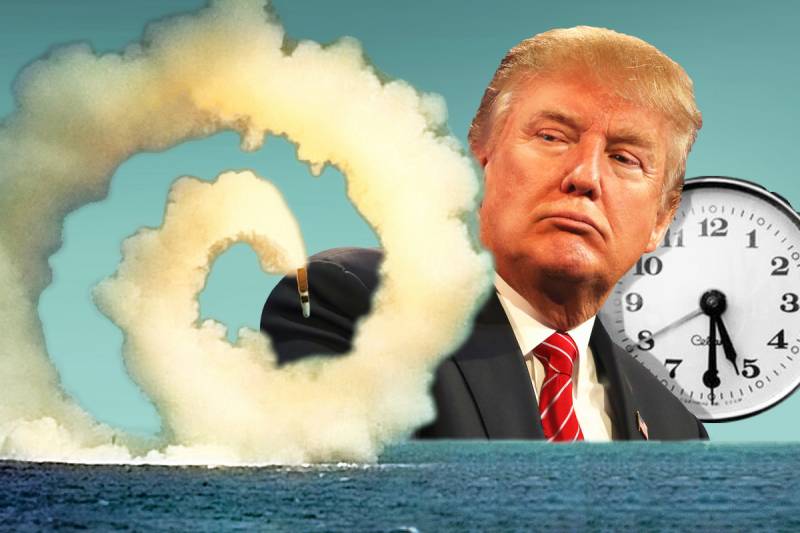 The first anniversary of his presidency, which, in an amicable way, should be considered not from the formal inauguration, but from the first significant steps as head of the White House (and this is March — April of last year) Donald Trump noted exactly the same as the beginning of his leadership - another missile strike on Syria.

At that (first) time, the clean demonstration of its steepness and determination, which is precisely how the world understood it, took place. Well, it took Trump to assert himself, losing a few barns on an obscure Syrian airfield, with whom it does not happen!

But precisely because of this understanding, that force action did not and could not have any continuation. From the very beginning, its scale and duration were extremely limited and they did not assume any further development.

And now a year has passed. And there was a second blow on almost the same goal. For Trump, the task is about the same as for the first time - once again try to prove to the whole world its steepness and indisputable capacity. But this time, the circumstances for his administration and the USA as a whole have become seriously complicated. First of all, because at the end of last year, US foreign policy can only be assessed on a solid unit with a minus. Trump with his unintelligible ambitions and dash from side to side during this time very thoroughly undermined American authority in the eyes of the whole world and proved exactly the opposite of what he wanted. The United States appeared as an irresponsible talker, who has seven Fridays of the week.

The history of his relationship with North Korea turned out to be the greatest shame for Washington. Which, in front of the eyes of the whole world, did not play the game “I am cool! To be afraid of everyone! ”And found a way to make Trump forget about the threats“ to wipe the DPRK off the face of the earth ”and even begin to search for ways to draw closer to this disobedient country.

After the year of this holiday of disobedience, America was in a position where its need to prove its omnipotence increased even more. Moreover, during this time another country, Syria, having fully mastered the experience of North Korea and with the support of its powerful allies, launched a decisive offensive against the rebels and saboteurs of all stripes and achieved almost complete liberation of its territory.

Thus, the next object for the "educational work" of America was designated by itself. It was Syria again. And Trump, according to the already established tradition, ordered a new strike.

However, this time it was necessary to prove to the world something more concrete and weighty than the fact that Trump is a “man.” First of all, to show the world community the indisputable proof of US military superiority and their ability to continue to dictate the will to anyone from a position of strength.

It turned out, to put it mildly, not very convincingly. The American strike of Syria has not caused any critical losses or destructions. Yes, and could not cause, given the fact that the United States refused to perform the initial, the most elementary task of any military air operation - from an attempt to destroy the enemy's air defense system.

Obviously, they did it quite deliberately, for they understood that nominally the Syrian air defense system still relies basically on Russian specialists. And so the attack on it automatically takes the situation to an unacceptably high level of direct confrontation with the Russian Federation.

Thus, already at that moment, when American missiles were just flying towards Syria, and nobody had even shot them down, America had already embarked on the path of finding the seemingly forever lost shores of its military-political activity.

I repeat: such a question did not even stand in the period of the first strike against Syria. And now it has arisen. And the American answer to it can best be described by means of a well-known saying about the ability to stretch the legs according to their clothes.

But then the fun began. The American strike did not achieve any goals and could not attain under these conditions. Accordingly, the United States found itself in an even more unenviable position, when their theoretically irresistible military power practically turned out to be very even repulsive. In any case, in this format and scale of its application.

In other words, Trump threw into the world a fire of doubts about the need to continue to regard America as "king of the mountain" at once a lot of highly undesirable logs for Washington.

In the case of North Korea, the Americans at least retreated in advance, not bringing the matter to the discovery of fire. And at least partially saved face. Doubts about their omnipotence appeared even then. But they still required evidence. Today, when the United States in Syria really applied their weapon and they have not achieved anything at all, these doubts are beginning to rapidly develop into complete and final confidence.

That is, the position of the States after this strike was even worse. Given this circumstance, it seemed quite logical that after such an almost affectionate exchange of courtesies with the Syrian air defense in the States, a real tsunami of indignation would rise in such a wasteless supreme commander who had brought America to such universal shame before the eyes of the whole world. Knowing how much in the US there are even few special reasons for wanting to bite Trump, for example, I almost did not doubt that his opponents would not pass by such an elegant reason for a new persecution.

But several days have passed. But even the American press, which usually does not feed bread, just let me jab about the “Putin’s agent” Trump and demand decisive action from him to maintain America’s global prestige, somehow sluggishly and without the usual enthusiasm unleash this topic. Or rather, frankly lowers it on the brakes.

And this is a very logical explanation. The one that made itself felt when the American "Tomahawks" and not very "smart", as it turned out, JASSM, just flew to Syria. Only now it has become even more obvious and indisputable.

AMERICA HAS ALREADY SAWED THE BANK. FIRST FOR THE LAST 25 YEARS! And today, finally, it is really beginning to reach them that they are not joking with them. And that America in fact, and not just in a Hollywood horror movie, can bang into the rubble, if only it does not stop its experiments with increasing blows and testing the limits of patience of Putin and his boys in Syria.

I think that today, not only at the editorial meetings in the American press, but also on the sidelines of the White House, Congress and the Pentagon, their inhabitants are intimate conversations about the following: “The devil knows these Russians. All of them can be expected. And what if they really answer in full? Jokes jokes. But what will happen to us? This is for America a full kirdyk can come! "

And this is not my speculation. According to the same American press, it was precisely the warning of the American Secretary of Defense Mattis about a possible Russian response that led the United States to limit the force and scale of its strike to the maximum.

Today, for the American press and local "establishment" to continue to suffer the usual garbage, engaging in harassment of Trump with frantic calls for new blows of "increased power", means a real risk of invoking something more terrible and irreparable than even the stock market crash. Therefore, the former “brilliant plan” of the anti-trap local “elite” in the present conditions can easily become a pass to the next world.

Thus, there is an ever clearer feeling that yes, some shores were groped in Washington. Or, if you want, the notorious "red lines". Going for which is equivalent for them to risk running into very big troubles. Accordingly, for the first time in almost three decades, the present-day United States has a clear sense of what they can and cannot exactly afford in relations with other states and peoples.

And this feeling is nothing but the most fundamental basis for the formation of a much more predictable international situation in which each of the players, without any “exclusive” exceptions, finally understands the limits of his capabilities. And there is no one else who, as before, would be disgraceful on a global scale, absolutely not feeling the shores of his strength.

Today everything has changed. And it seems that the Americans themselves understand this. What should be expected. I have always written and argued that the Anglo-Saxons, by virtue of their historical experience, understand only power and reckon only with power. And when she is properly presented to them, they, like all realistic-minded people, will be forced to change the tone, and after him the rules of the game. Because they will be convinced: the previous strategy of lawlessness is no longer working and, therefore, it must be abandoned.

It is to such a fateful turn now, after the repeated rocket attack on Syria, all the planet has approached. Of course, she came not by itself. To this it is delicately, but at the same time, Russia and its president persistently failed. Vladimir Putin clearly formulated his position with the phrase “We have nowhere to retreat further!” And this principle unswervingly follows where it cannot be avoided. Do not bend the stick, but bending it is always just as much as necessary. So, as he did just in Syria.