Welcome to the arms race, gentlemen!

April 17 2018
30
In recent days, after sharply aggravated relations between Russia and Western countries (US-European sanctions in connection with the case of Skripale poisoning and an unauthorized UN missile on Syria by armed forces of a number of countries headed by the USA), the front pages of the most influential newspapers in the world once again flashed almost forgotten phrase "arms race". Politicians and experts talk in chorus that a new round of such a race is inevitable, and it will cause great damage to the Russian economy. However, an impartial analysis of the current situation leads to completely different conclusions. 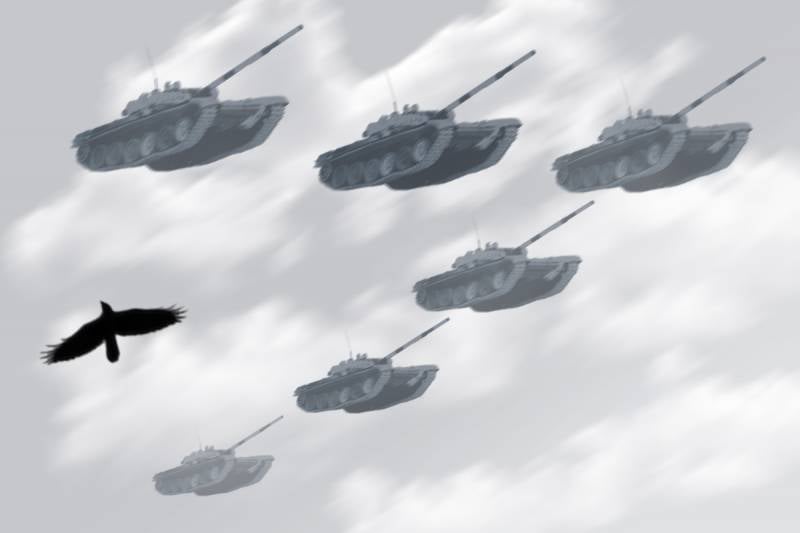 For example, on April 15, the head of the Department for Non-Proliferation and Arms Control at the Ministry of Foreign Affairs of the Russian Federation Vladimir Yermakov made a number of statements at the Assembly of the Council on Foreign and Defense Policy (SWAP). In particular, he doubted that international agreements related to arms control could be reached in the foreseeable future. As for the comprehensive test ban weaponsthen the agreement on this is unlikely to ever come into force. There is little chance of being extended by the treaty concerning offensive weapons (START-3), since, according to Vladimir Yermakov, “the Americans within the current treaty behave indecently.” “The arms race, of course, is not a bluff, but a very dangerous reality that has a significant disruptive effect on global stability and international security,” the diplomat said. According to him, the reason for what is happening is that Western countries do not want to abandon the monopolar system of the world order.

Earlier, US President Trump wrote in his infamous Tweet addressing Russia: “Maybe we’ll stop the arms race?” After which the American generals gave the order to press the Start button with their rocket engineers who famously bombed a number of objects in Syria.

Earlier, in March 1, 2018, in his message to the Federal Assembly of the Russian Federation, Vladimir Putin presented to the whole world new highly efficient types of Russian weapons capable of overcoming any means of anti-missile defense. After that, many began talking about the impending aggravation of the arms race, into which Russia could be drawn.

So what happens? Are we really getting into a new arms race?

There are three areas whose condition may indicate the presence of an arms race: the supply of arms, the military industry and military spending. Not so long ago, the Institute for the Study of the Problems of the Protection of the World (SIPRI, Stockholm) published data that indicate an upward trajectory in all three of these areas. In particular, in 2012-2016, the maximum value (compared to any five-year period after the end of the cold war) reached the volume of trade in conventional weapons. Since 2010, the one hundred largest defense industry enterprises have shown steady growth in arms sales. Compared with the previous five-year period, the volume of international trade in main types of conventional weapons increased by 10% (in 2013 – 2017). And in the same five years, the United States of America increased its arms exports by 25%! And this is despite the fact that the share of the United States in all international arms transfers is more than 1 / 3 (34%). By the way, Russia ranks second after the United States in the world in international arms transfers. Moreover, we are not so far behind the leader: Russian shipments are about 2 / 3 of US manufacturers. True, in recent years, sales of our manufacturers have not increased. Nevertheless, the supply of our arms manufacturers exceeds 3-4 times the deliveries following Russia in this ranking to France, Germany, China, and the United Kingdom.

The total sales of weapons and military services by the world's largest arms manufacturing and military services companies (top-100 SIPRI) reached 374,8 billion dollars. Sales of general arms to Russian companies from the top 100 SIPRI grew by 3,8%, making $ 2016 billion in 26,6. They accounted for 7,1% of the total. 10 Russian companies from the top 100 SIPRI demonstrate ambiguous trends in arms sales: five companies recorded sales growth, while five others showed a decrease. The best results for 2016 year were from United Aircraft Building Corporation, which took the place No. XXUMX in the rating. In 13, its sales increased by 2016% compared with the previous year (due to the growth in supplies to the Armed Forces of the Russian Federation and the increase in export volumes). 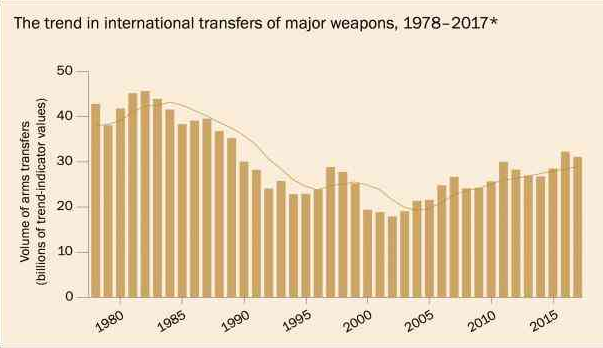 On the chart: international sales of conventional weapons in 1978 — 2017 years. Source: SIPRI

Thus, the dynamics of the volume of production and international arms sales (see chart) shows that the arms race started around the year from about the 2005 and is gradually accelerating. And Russia in this race is not the last (see the graph below; the source is the same). 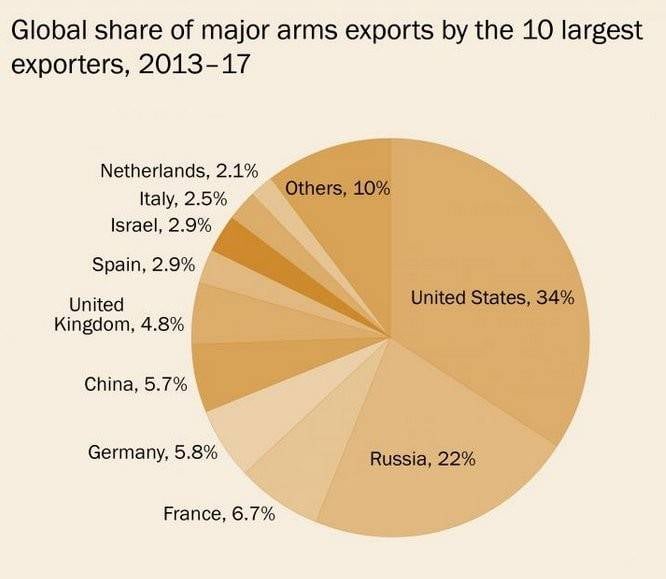 Objectively observable arms race (still local) is fueled by regional conflicts and hotbeds. For example, arms imports to the Middle East have doubled over the past 10 years. Most countries in the Middle East have been involved in armed conflicts in the past five years. Therefore, it is logical that the purchases of weapons by these states increased by 103% (!) Compared to 2008-2012 over the years. Their volume is 32% of the total world volume of arms imports. The main arms shipments to this part of the planet are made by the USA and European countries. In particular, Saudi Arabia buys 98% of its weapons from these countries.

Continuing regional tensions in South Asia lead to a steady increase in arms imports to India. Today, this country is the largest importer on the market for the main types of conventional weapons. India accounts for 12% of the total global supply of weapons. In the 2013-2017 years, India increased its imports by 24% compared to the 2008-2012 years. Russia also participates in the division of the Indian "military cake": 62% of India’s imported weapons in 2013-2017 were of Russian origin. At the same time, over the past five years, India’s imports of weapons from the USA increased by 557% (!), And now the United States is second only to our country in terms of the volume of arms supplies to India.

The growth in arms purchases, which India cannot make on its own, is stimulated by its protracted conflict with Pakistan and the growing tensions with China.

China is increasingly able to create and produce their own weapons of acceptable quality. This allows Beijing to strengthen relations with Pakistan, Bangladesh and Myanmar through the supply of arms of own production to these countries. By the way, thanks to the development of its own defense industry in the past five years, China has reduced the import of weapons by 19%. Nevertheless, China is in fifth place in the world in terms of arms imports. 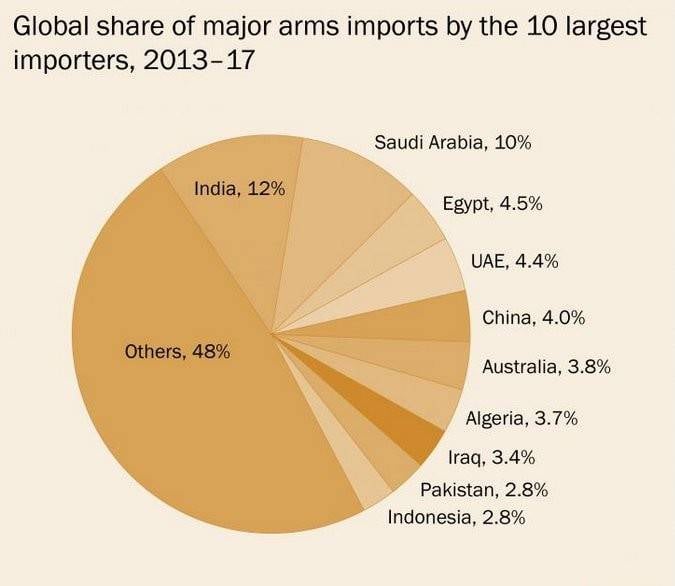 The following facts are also curious. In 2013-2017 arms imports by African countries fell by 22% compared with the previous five years. Imports of weapons to Nigeria (where the armed conflict has flared up for more than a year) increased by 42% over the same time.

From about 1998 in the world, there has been a general steady increase in military spending: 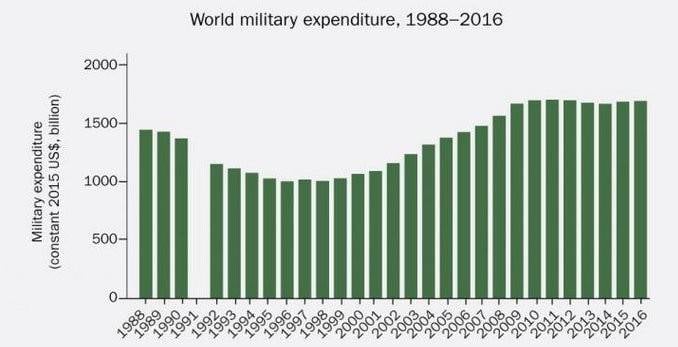 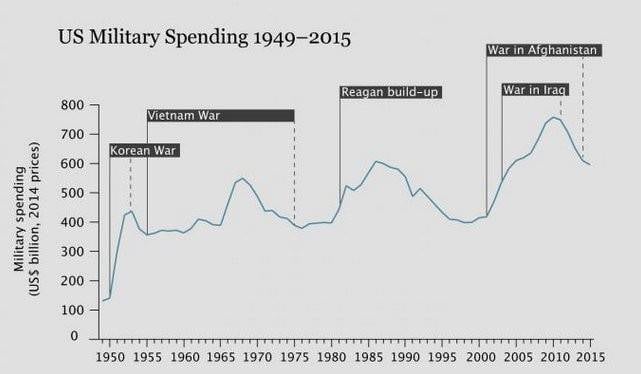 The greatest burden of global military spending is borne by the United States. They are followed by China and Russia. After them go Saudi Arabia, India. Close the seven countries with the largest military budgets, France and the United Kingdom: 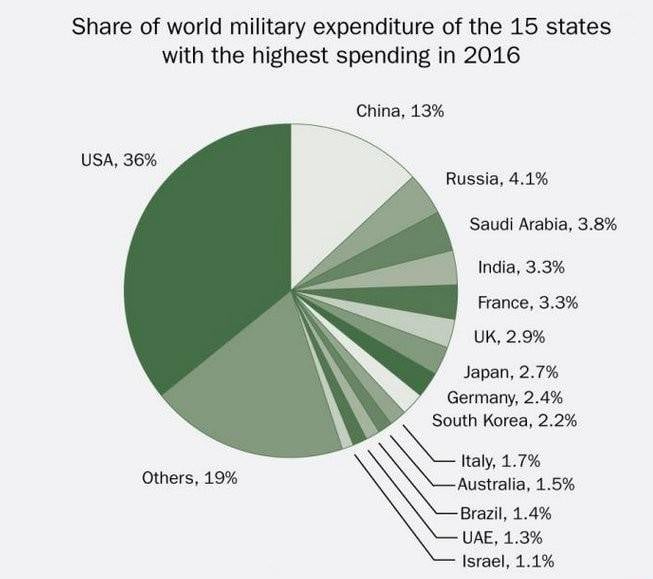 In short, when we say that we are being dragged into an arms race, we need to understand that, firstly, Russia has long been drawn into this race as the largest arms exporter. And so the strengthening of such a race can be considered (although it is cynical) in terms of benefits for our defense industry. Therefore, something new is not likely to be brought into the current increase in tensions with Western countries in connection with the production of armaments, which will lead to a catastrophe. And secondly, the arms race, which has been intensifying for years, is fueled by numerous conflicts in the world and regional tensions.

Ctrl Enter
Noticed oshЫbku Highlight text and press. Ctrl + Enter
We are
Interview of V. Putin to Channel One and the Associated Press AgencyWhat you didn't want to know about England
Military Reviewin Yandex News
Military Reviewin Google News
30 comments
Information
Dear reader, to leave comments on the publication, you must sign in.