April 16 2018
51
25 March, a fire broke out in the Winter Cherry shopping and entertainment complex. This is a tragedy. Killed 64 person, of which 41 is a child. For someone, the whole Universe has died, the life of their relatives in fact will not be the same, not in the loud headlines of articles, not on the revealingly sad faces of politicians, but in a mournful reality. 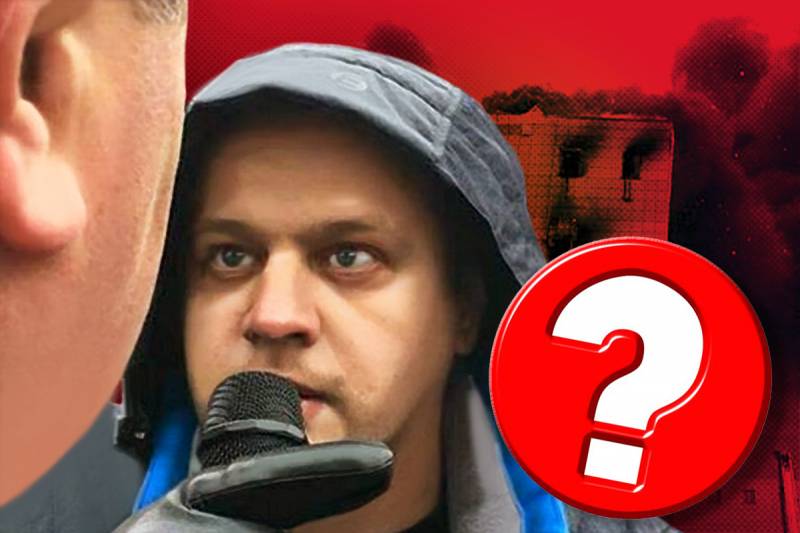 In the very first hours of the tragedy, from all possible information channels such verbiage of versions, conclusions and accusations spilled out onto all citizens of Russia, which, compared to this, was simply child's play. The media audience, plankton around the planet and individuals from the orderless political group quickly saddled a wave of popular anger. Hoping to break through this provocative fog, professional journalists, of course, tried to convey verified information to the audience. But, trying to attract attention, they considered the causes of the tragedy under such an unimaginable number of original angles that they unwittingly contributed to the chaos in which the causes of the tragedy, the perpetrators, and the general trends that led to this were drowning. 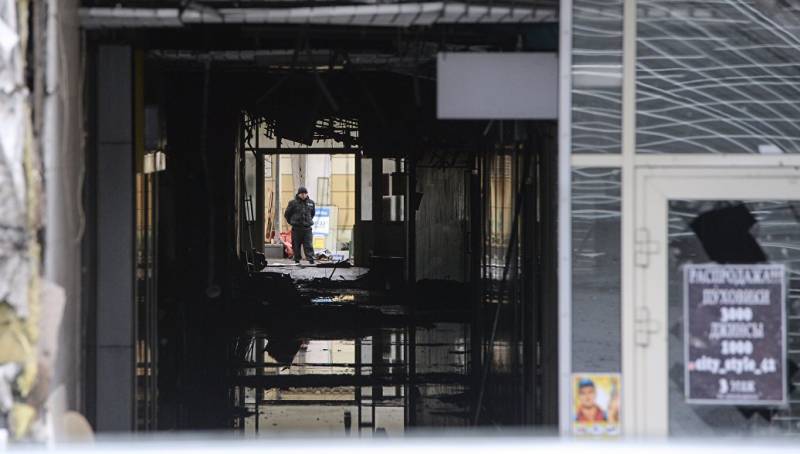 Now, an attempt to clean these Augean stables, behind the garbage that hides real problems, sometimes seems impossible. But still ... Firstly, according to eyewitness accounts, some of the premises were blocked, in particular, one of the cinema halls, which turned into a monstrous crematorium for our compatriots. Secondly, the fire alarm did not work. Thirdly, the protection of the SEC and its immediate staff for the most part could not provide any assistance to visitors. Fourth, part of the firefighters did not have the necessary equipment. Fifth, how quickly the topic of supervisory vacations dissolved in the information fog, i.e. moratorium on conducting scheduled inspections of small businesses. And so on and so forth. And one should not lose the factor of provocation by “our” opposition pack, whose language was stuck in the most intimate places of Western masters at the end of the last century.

But along the seam of the whole tragedy, all the questions and accusations, total ringing irresponsibility and impunity passed. Everything else is just a good old attempt to hide shit under the rug.

The cry about the need to create a "system of control" was, of course, picked up by his share of applause. But the system with all its flaws and loopholes already exists - there is not only one thing in it - responsibility. The fire inspectors who checked the burned-out ground at the end of 2009 of the year and killed the Lame Horse 156 people did not spend in prison and 5 years. The guys have long been free, as well as most of the perpetrators of those events.

As soon as a hint of a piece of guilt of the entrepreneurs themselves exploited any commercial space to cracks on the walls, my favorite ombudsman Boris Titov emerged from political oblivion. Having chewed something on the air in defense of blue-gray and unhappy businessmen ruined by bloody officials, he quickly disappeared from the agenda. Politicking bloggers and blogger politicians helped him a lot in this by placing the blame on the government and only on it. The information field of the so-called supervisory vacations for an innocent small business quickly erased from the information field. Therefore, Titov, while not interested in his business, and how many small companies it is fragmented, left the information field covered with fog.

But modern capitalist realities, with their invisible, but sacred objective hand of the market, were far from the last place, both in the tragedy of “Winter Cherry” and in other similar events. Thus, a moratorium on scheduled inspections of small businesses was introduced in the 2016 year, and in March of this year, a few days before the fire, it was decided to extend the “holidays” to the 2022 year. Then our ombudsman Boria, who advocated not only extending the moratorium, but also extending it to medium-sized enterprises, was also highlighted.

For reference, if you drew yourself a small business of a certain shoemaker's workshop, jewelry store or repair of household appliances, then you were cruelly mistaken. By small business, according to the regulations of our wise government, we mean individual entrepreneurs and companies whose incomes do not exceed 800 million rubles, and the number of employees can reach 100 people. Therefore, pulling your eyes from indignation when they tell you that the Winter Cherry shopping and entertainment complex is a small business is at least naive. Indeed, in our country with its cave formalism, you can drive up the Porsche Cayenne to the courthouse and with a pure soul present a salary certificate in 7 thousand rubles - and this certificate will be accepted.

We should not also forget that the very street shouters who have taken advantage of the human grief of the victims in the SEC, with the same pressure, scream that the government is a nightmare business. Wherever you throw a wedge everywhere ... If you, of course, have neither moral nor political will.

At the same time, supervisory vacations have become an important incentive for splitting companies into “unsupervised” atoms with an authorized capital of 10 thousand rubles (it is simply not possible below, according to current regulations). For the sake of truth, it is worth noting that the creation of such fine-cut counters has previously been beneficial in certain circumstances. For example, in the case of risky transactions and force majeure circumstances, a large company for them creates a firm with scanty capital. In the case of lawsuits, such a firm will, of course, be bankrupt, and the plaintiff will have to be content with the trash share capital, since it will be difficult to transfer the blame from the commercial process.

Another touch to the portrait of the information reflection of the Kemerovo tragedy is quite legitimate indignation at the monstrous confusion of the rooms and corridors in the Winter Cherry shopping mall. Later it was connected with the fact that the dispenser is built on the basis of a confectionery plant. But no one even hinted that the reality of the new Russia was based on the unconditional primacy not of security, but of business interests. Therefore, all the SECs and SECs are built on the principle of intricate navigation in order to keep the buyer, even if he burns.

The fact is that by placing all the shops in an intricate (albeit only in appearance - everything is logical for business) order under one roof, providing each of them with audio information flowing from all the speakers, even in the elevator, the kings of marketing achieved a curious effect. This effect has been called the “Grun transference”, when the human brain receives so much information that it involuntarily falls into a state close to paralysis. In this state, the unfortunate man in the street can be thrust anything.

Moreover, many shopping and entertainment centers from the inside are exclusively decorated with glass, metal, and the floor is always flat white tiles, reflecting all the colors of the illusory marketing world. This is done to lure music, glittering lights and video from the screens of numerous monitors do not give the visitor the adequacy of any chance, echoing and reflecting from all sides. Literally falling on the unfortunate resident of the era of consumption. In this state, it takes a minute for a person to start thinking reasonably and quickly. And this without any fire or smoke. Those. any fire-fighting system in such a temple of consumption must be ideal (in the case of the Winter Cherry, at least to work) in order to get the person out of the stupor.

The last hope for putting any sound grain into the global hub was a quiet and modest reminder of the existence of such a vile thing for a free business as SNiPs, i.e. building regulations. These very norms do not allow placing children’s rooms above the 2 floor. But this modest attempt quickly went to the bottom.

So maybe the tragedy that occurred will make the owners of the purchase / sale palaces feel social responsibility? There is no talk of fear of punishment - there is nothing to fear, even in the case of bringing the case to court. Therefore, the author went to the nearest large shopping center, but without any hope. 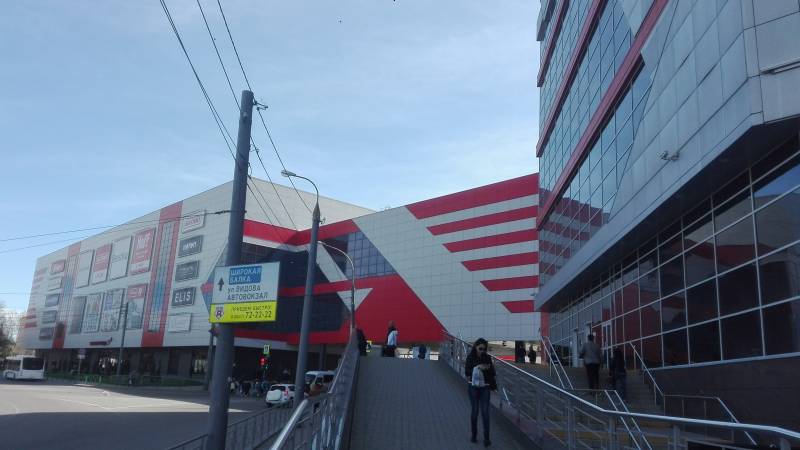 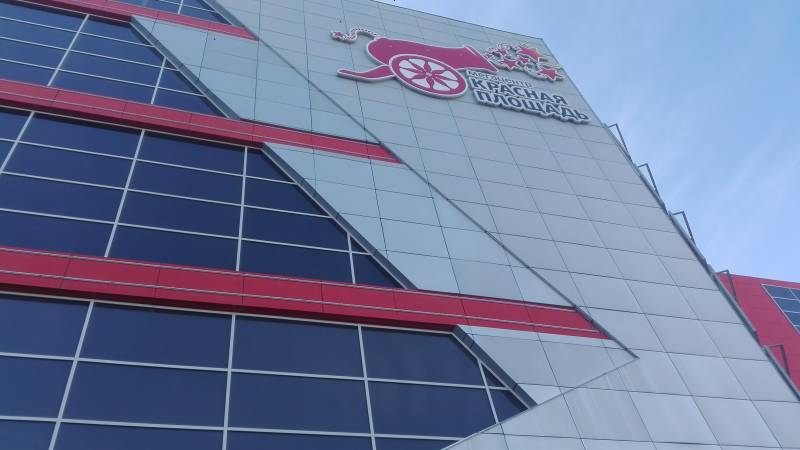 In Novorossiysk, the main shopping center is the "Red Square". Once it was a one-dimensional building in six floors. Now the center has grown and threw another fat tentacle across the whole street. There, he took almost more ambitious roots of the second building.
Inside, everything is grandly noble, everything in impeccable marketing science is a brilliant glossy floor, bright flowing light and the hubbub of music. And so that the buyer is in no hurry to leave such a magnificent palace, the escalators are arranged in such a way that in order to go down or up - you will have to go around the whole floor. 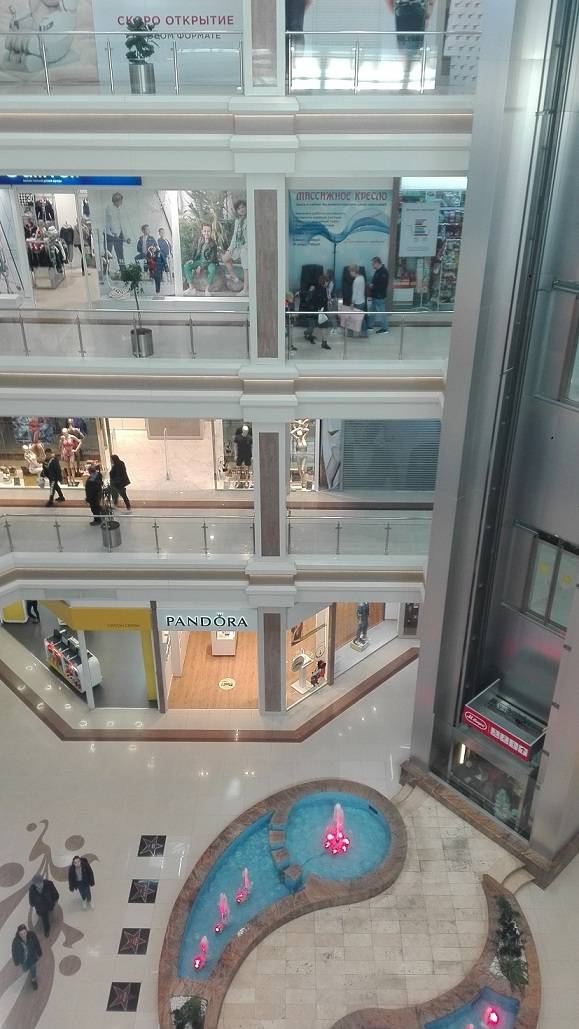 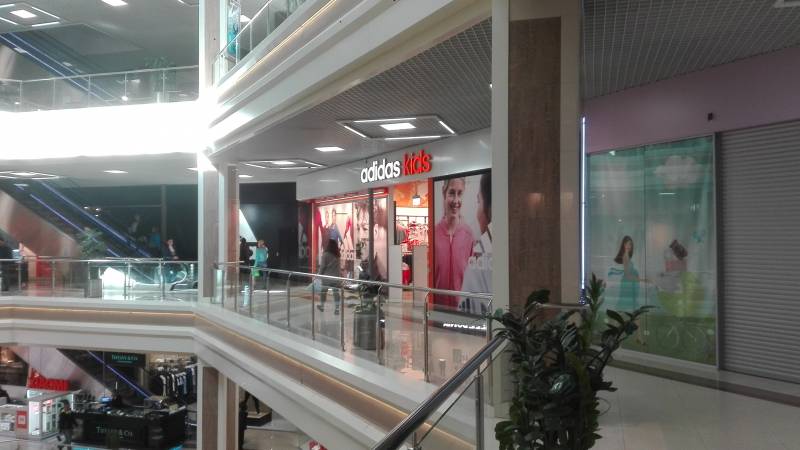 Naturally, having thrown a couple of looks into the womb of this “buy-sell” decorated with a fountain, I headed upstairs, forced to bypass each floor in a circle. 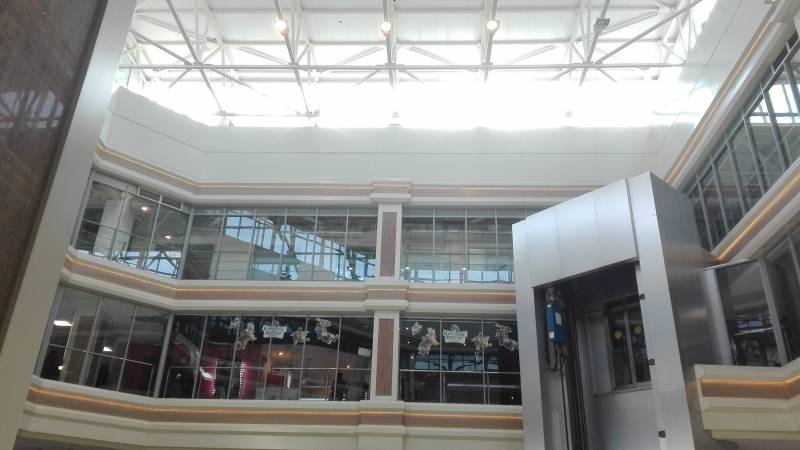 The cinema halls are located under the very dome on the penultimate fifth floor, where all new visitors, including those with children, run with a shaft. Moreover, exactly there, on the 5 (!) Floor is an entertainment center for children "Islands". Thus, the SNiPs finally crawled under the baseboard, they died there. Judging by the music rushing from the inside of this center, and the lights of dozens of slot machines flashing like a Christmas tree, no one even thought about transferring this center to the second floor. 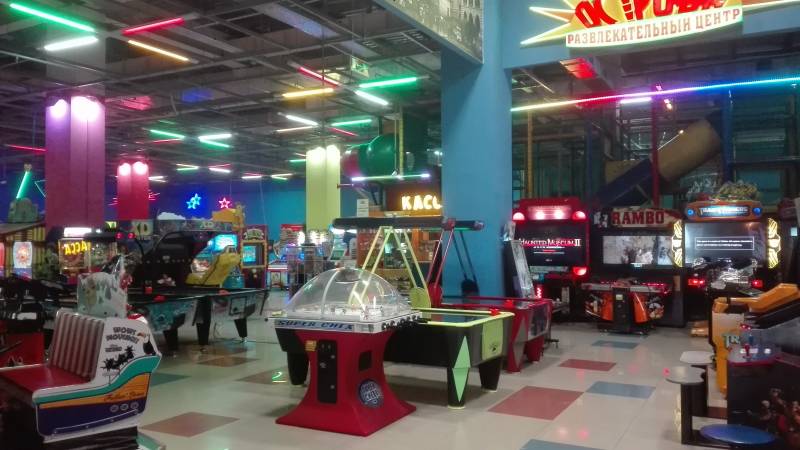 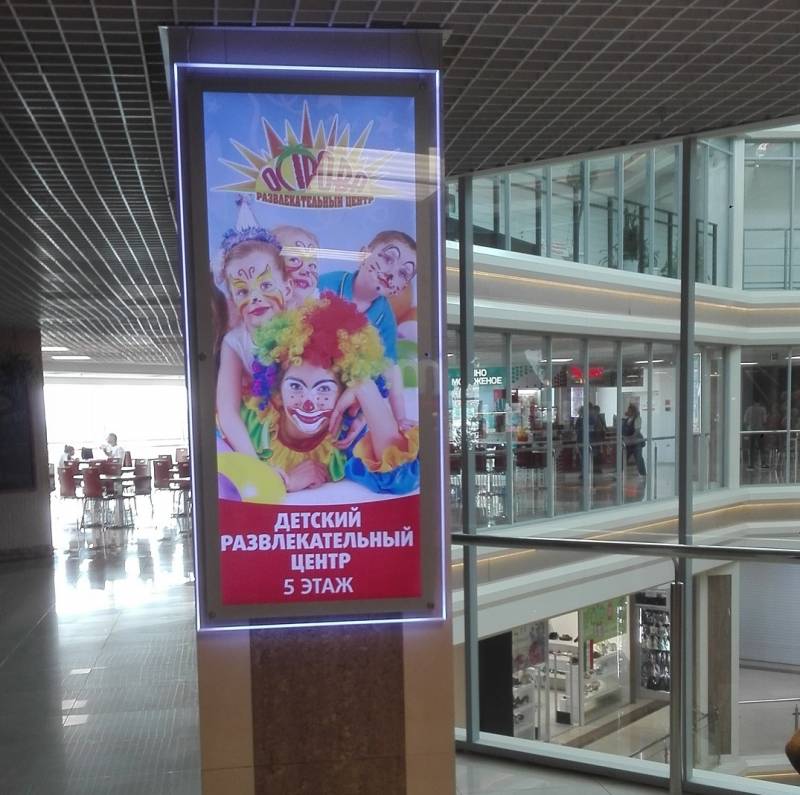 But where is the emergency exit? The only alternative to circular movement on the floors and jumping on the escalator (elevator do not take into account). He, fortunately, is. To it leads a thin corridor, resembling the neck of a bottle. I did not notice any signs leading to it. 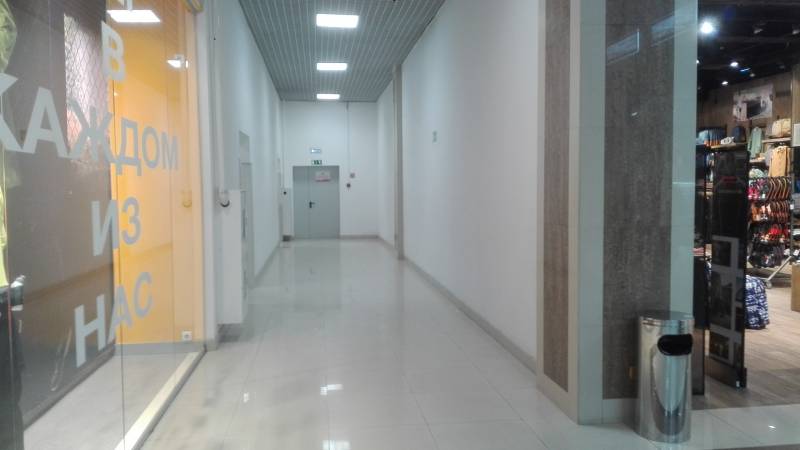 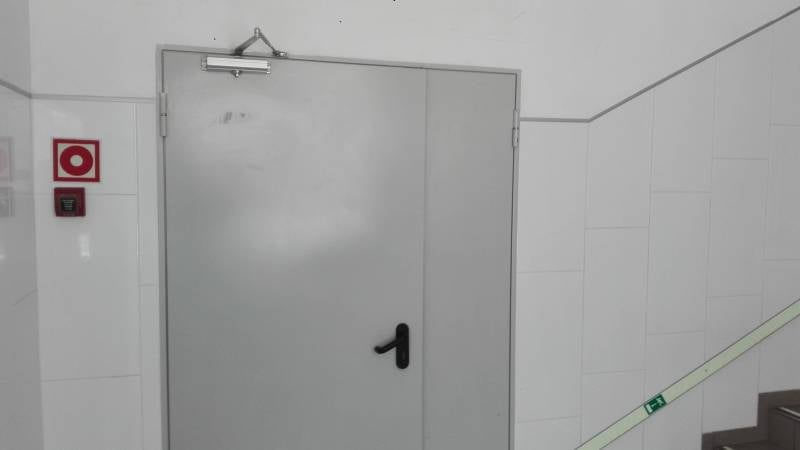 The exit door is as tight as the cork of an old bottle. It is not possible to open it to a child of 8-10. 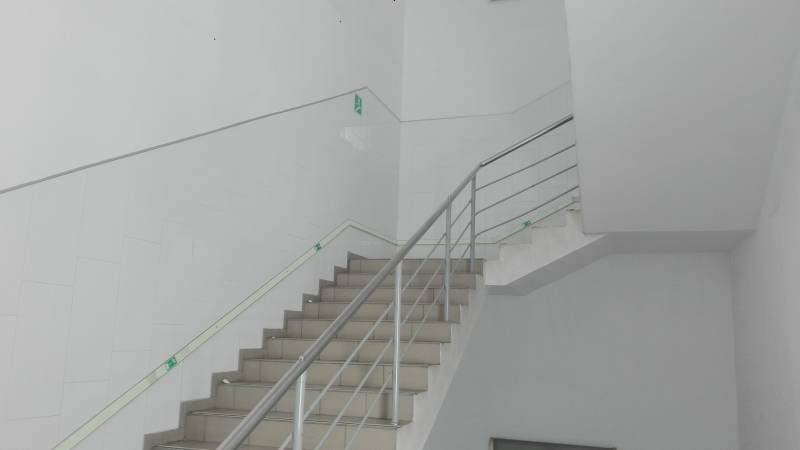 The width of the escape route barely allows three adults to disperse. I hope I will forgive the reluctance to check the railing for stability. 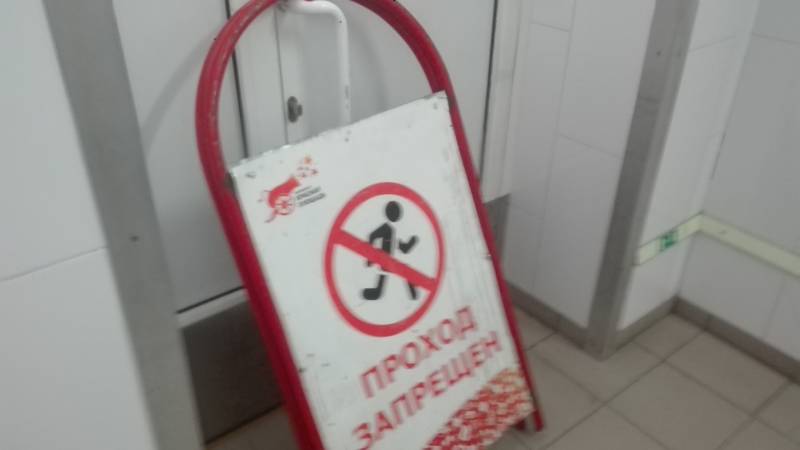 I apologize for the defocus, the people were bursting with a session and just pushed me down the stairs 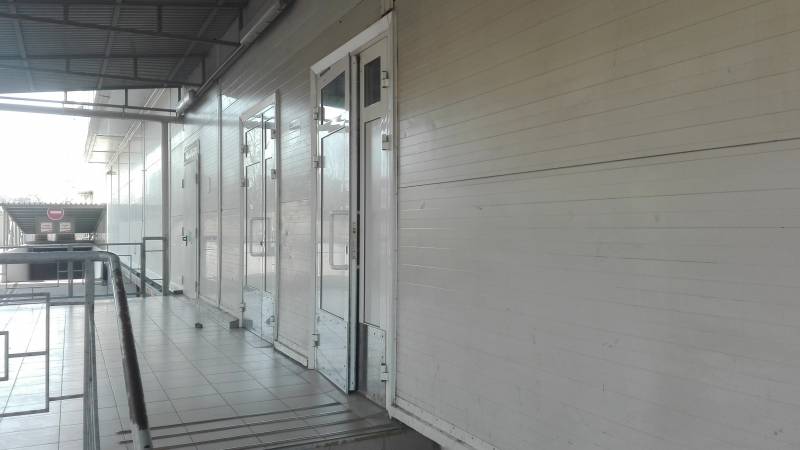 Downstairs I was waiting for another small detail that, under the tragic circumstances, could cost someone their lives. Two doors led out. But, first, both are single-winged, which will provide a crush. And, secondly, one of the doors was tightly closed and decorated with a talking stand - “Passage is forbidden”. However, it would be more appropriate - there is no way out. 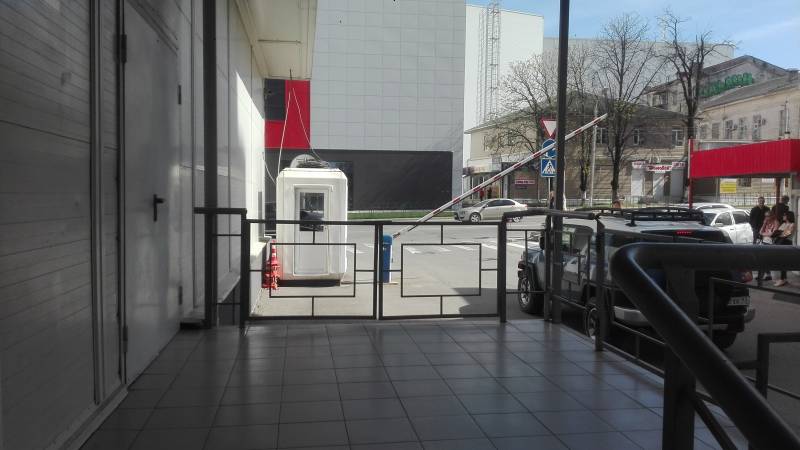 Outside, I was in for a surrealistic picture of a button-man sitting in a tiny booth, the only function of which was to raise the barrier. The booth stuck at the end of the colossus of the shopping center. What is the irony of life ...