Aluminum bullet: the future for the secret services or a reason to laugh?

April 16 2018
123
Aluminum bullet topics on hunter forums - not news. Moreover, conversations are long and calm. Okay, hunters are specific people, probably, even fixated on their own weapons and ammunition to it. Pour bullets, shoot them, share their impressions. Everything is in order.

Surprisingly, but somehow unnoticed, conversations about aluminum bullets have already been registered and are being conducted at military forums.

Someone "on a big secret" talks about new bullets for special forces. Someone is arming them with the police. Someone national guard. And it looks quite respectable.

The low weight of aluminum gives a significant "slimming" of the bullet, and therefore, increases the initial velocity while maintaining the same charge. A faster bullet has a greater stopping effect than a heavy lead bullet.

Let's try to understand the essence of the issue. Is it possible to arm any structures with aluminum bullets?

Let's start with a stop action. Indeed, the energy of a light bullet will be higher than heavy. But this advantage will operate at a very short distance. Literally in 20-100 meters, depending on the type of weapon, the bullet will turn into a traumatic one, and then generally into a stone for a slingshot.

Beautiful idea. A policeman or guardsman with a pistol, who calmly uses it even in the presence of civilians around. The bullet strikes at a distance of 20-40 meters. Next - bruises and bumps for bystanders.

In this case, this policeman shoots much better than he did before, with normal ammunition. Just because the light ammunition will give less recoil barrel. Aiming will be easier. Criminals at close range are amazed more effectively.

And now let's look a little wider. And if the criminal also has a weapon? With a normal heavy bullet? And the criminal will have the same distance as the policeman. Only the fire he will open at least ten meters earlier.

But this is not the main thing.

What to do if the offender hides in the bushes or behind a sandy, earthen, or even wooden shelter? What happens then? A quick but light bullet dramatically loses its advantages. The penetrating ability of such a bullet decreases sharply due to the rapid transfer of energy to the target. In this case, the obstacle ...

A bullet passed through the plywood door and turned into a piece of metal that the boy shoots with a slingshot at sparrows.

Imagine a fairly common situation: the use of weapons by the person who is in the car. The effect of a bullet hit on the glass will be about the same as in a wooden wall. Especially in Lobovyk from the "triplex". Perhaps the bullet will pass through the glass, but to hit the offender so as to neutralize him for sure, can not. The main energy goes to the glass.

Modern glass? Triple? More? You begin to understand that in this case a pistol with a light aluminum bullet becomes just a toy. The method of causing light wounds at best. Shards of glass ...

And if the street is such a rare occurrence as the wind? A light bullet with a large caliber, and hence a large sail, will fly to where the gusts of this same wind will direct it. Can you imagine the quality of shooting?

If in general, all this vague vertezh on aluminum bullets is nothing more than just trying to earn a cheap authority on knowing what tomorrow may be.

In principle, aluminum already has an application in the production of bullets. In particular, cartridges with increased armor penetration. Type 9х19 PBPgzh (according to 7Н31). There the shirt is made of aluminum alloy. The bullet works great on 2 class body armor. 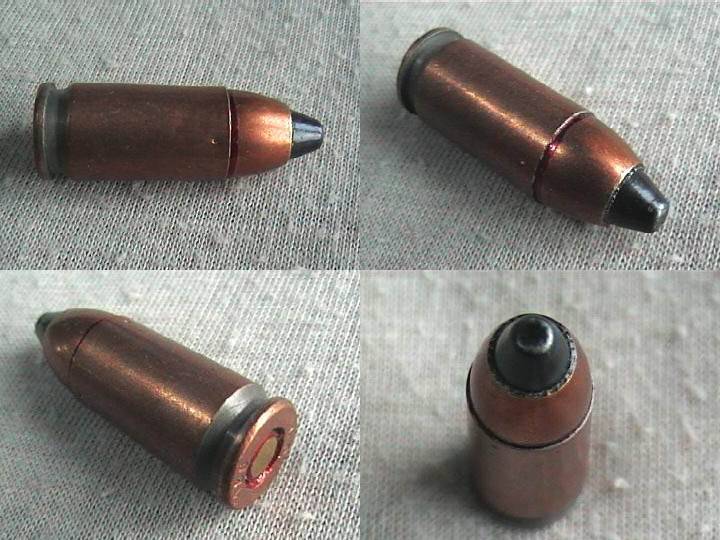 There is another very important factor that reduces the possibility of applying aluminum to zero. Here we will immediately emphasize that we are talking about aluminum, since no alloys were used in pseudo-articles.

Any product made of aluminum very quickly becomes covered with a thin layer of oxide. This compound is known as corundum. Al2O3 On the bullet layer will be a 1-3 micron. Not at all critical. But he will!

What is corundum? One of the best abrasives to date. No worse than diamond chips, but cheaper by an order of magnitude.

And what will the abrasive material do with the barrel of a pistol? Anyway, with any trunk? I think no need to tell. Hello cuts in particular, and the trunk as a whole. Wear will be huge.

Well, for those who really want to know more about such bullets, I will talk about the excellent replacement of aluminum. More precisely, about the bullet that has already been developed. It is a half-shell bullet with a bare, hardened core in a plastic shirt.

The bullet turned out exactly the way aluminum supporters described. Light, with a high initial speed, with a small dangerous interval. But at the same time, the deficiencies mentioned above were eliminated in this pool.

When hit in a bulletproof vest, such a bullet acts like a regular sub-caliber armor-piercing bullet. The core works. But when it enters the soft tissues of the human body, the half-shell has sufficient speed so that the stopping effect of the bullet is higher than that of ordinary ammunition.

But if you look at the trends in the development of weapons for the police and special services, you can see an even simpler solution. The decision that designers have come to for a long time. Caliber pistols and revolvers for special services began to increase.

At the same time, bullets for such weapons have changed. The designers returned to the expansive pool. Soft, rapidly losing speed, but having tremendous stopping power. Deaths became less, but injuries became more serious.

In general, combined bullets reign in the modern world. The development of weapons requires more and more new types of ammunition, and accordingly, new materials for their production. It is possible that the time will come and aluminum. But definitely in any combination or alloy. Anything is possible, for never say never.

Ctrl Enter
Noticed oshЫbku Highlight text and press. Ctrl + Enter
We are
Stop cannot be killed. Where to put a comma?Caliber 9 mm and stopping action. Why was the 7,62x25 TT replaced by 9x18 mm PM?
Military Reviewin Yandex News
Military Reviewin Google News
123 comments
Information
Dear reader, to leave comments on the publication, you must sign in.