How Ravu Russian stormed. Part of 3

April 22 2018
8
As a result of the four-day battles of Rava Ruska - Waldorf - Magiruv, the efforts of the 3 corps of the Russian 3 army were not enough to fulfill the main task.


The Austrians still held important railroad lines. the node of Rava Russkaya, on the left flank of the 3 Army (near Waldorf), was threatened with a breakthrough between the 10 and 12 army corps and a further bypass of the internal flanks of the Russian armies. The resulting breakthrough tried to localize 3 Russian cavalry divisions.

Commander-3 N.V. Ruzsky, reporting the situation to the front command, expressed the view that further success is not feasible - referring to the presence of strong in nature and well-fortified positions, which were occupied by "still unshaken" parts. N.V. Ruzsky complained about the lack of reserves in his army, concluding that a difficult situation could be resolved only after the capture of Rava-Russkaya with the help of the troops of neighboring armies - the 21 corps of the 8 army and the left-flanking corps of the 5 army. The assistance of the latter was recognized as essential.

The report of N.V. Ruzsky and the removal of the 11 Division from the front and the withdrawal of the latter to the army reserve indicate that the commander, having little or no orientation in the situation, considered the position of his army in extremely pessimistic tones - and in fact at that time on the right flank operational unification was brewing a major victory.

The official description of the 1914 campaign. on the Russian front, this was how the first stage of the operation at Rava Ruska was: “the enemy strained all his efforts in the Rava-Russky area to break through between the 3rd and 5th armies. The desperate position of the enemy gave him strength. The general situation of our armies under the concentrated blows of the Austrians again became complicated and until August 26 was rather difficult ... ”

As tasks for their corps on 28, August N.V. Ruzsky ordered: 21, 11, and 9 army corps to continue the attack on Rav Ruska. The 21 Corps was ordered to take a more southerly direction (the left flank was to attack the Grebenne – Rzhichki sector), and the 10 Corps was to defend its positions by ensuring measures against the enemy’s breakthrough.

The Austrian 2s, 3s and most of the 4 armies continued their concentric attack on Lviv, while the left flank of the 4 armies and the Joseph-Ferdinand group were assigned to ensure their flank and rear.

The 21 Army Corps fought the whole day with the Austrian 8 Infantry Division (the offensive was led by the 44 Infantry Division, which occupied the Lyubych area by evening). After occupying the 5 Army Corps of Narol, the cavalry corps of the 5 Army advanced towards the Ceshanuva region by evening. The exit of the 5 Corps to Narol and the far round of the cavalry corps forced the Austrians in the evening to begin the withdrawal of the 4, 8 of the infantry and 13 of the Landwehr infantry divisions for the railway station Gorinetts-Potylich. Further movement of the Russian 5 corps threatened to cut the railway Rava Russkaya - Yaroslav with access to the deep rear of the Austrian 4 army. The 17 and 21 army corps also advanced successfully to the railway, taking the Rudka-Khmel district and the parts of the 17 corps - Verkhrat-Sedliska-Grebenne by the evening with the 21 corps.

The command of the Austrian 4 Army saw the impossibility of quantifying the weak exhausted troops of the 2 Army Corps to stop a deep bypass of their left flank with 3 army corps and cavalry. And in 16 hours 30 minutes received an order to withdraw for the river. San 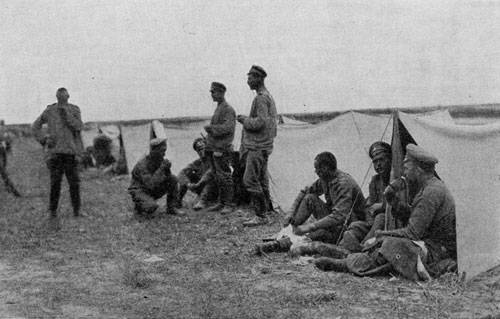 At the same time, there was a turning point in the course of hostilities at the front of the main forces of the 3 Army. The general attack of the positions of Rava Ruska by the troops of the 9 and 11 of the army corps was to take place on August 29 - how the success of the offensive of the 21 corps on Grebenna was marked.

28 August The 10 Army Corps managed to eliminate the Waldorf breakthrough. The Austrian 6 and 9 army corps 28 - 29 of August led active operations - vigorously advancing. The worst situation was created on the left flank of the Russian 10 Army Corps - but, despite repeated enemy attacks, the 9, 19, and 31 infantry divisions not only repulsed all attacks, but advanced on the flanks. The 4 heavy artillery brigade division, which led a successful counter battery battle in the area of ​​the village of Vereshchitsy, actively contributed to the success of the battle.

In his reports to the front command N.V. Ruzsky, by the end of 28, August described the operational situation in the 3 and 8 armies as extremely serious - reporting that the Austrian corps departing from the front of the 5 army were trying to break through in the interval between 3 and 8 armies - to Lviv. He also noted the threat of bypassing the left flank of the 8 Army, and the 3 Army could help the latter only after seizing Rava of Russia by hitting the Austrians with Nemirov. But Rava Russkaya, the general noted, keeps holding back the implementation of the maneuver. The troops of the 3 Army were very tired, suffered serious losses. And an urgent need for the exit of the left-flank corps of the 5 Army from the Tomashev side is urgently needed.

In the morning of August 29, the artillery of the 4's Russian divisions of the 9 and 11 of the army corps (220 guns), which surrounded Rav Russian in a semicircle, opened hurricane fire at enemy positions. Part of the Austrian 3-th and 19-th infantry divisions with heavy losses retreated under the onslaught of Russian troops.

In the area of ​​the 58 Infantry Division, Austrians conducted offensive operations. D. G. Shcherbachev marked the energetic attack of the enemy in 22 hours of August 28. The general recalled the picture of the battle: the non-stop artillery fire, releasing hundreds of shells, missiles. But 58-I division not only repelled the enemy, but also went on the offensive - and in some areas bayonet fights took place. The 2 Russian night attacks were also successful - and by the morning of August 29 the Austrians began to retreat. The prisoners turned out to be "more corps".

All Russian divisions went on the offensive.

Summing up the battles on the approaches to Rawa Russkaya, it should be noted that the troops of the 11 and 9 of the army corps, leading a frontal attack on the fortified position of the enemy for 6 days, could only seize its forward lines and approached the main resistance line. This speaks, on the one hand, of the power of the 24-kilometer fortified position under Rava Russkaya, and on the other hand, of the valor of its defenders - parts of the Austrian 3, 19-th infantry and 41-th trooped infantry divisions, as well as the equestrian corps Whitman. On the other hand, this situation is indicative of serious operational-tactical omissions on the part of the command of the Russian 3 Army and personally N. V. Ruzsky. Inconsistency between the actions of divisions and corps, the unsuccessful maneuver of the 11 corps, the lack of a sufficient number of heavy guns - these are the main reasons for the poor performance of the central army group. Both Russian corps suffered relatively small losses: the 11 Army Corps — about 3,2 thousand people (without the 11 Infantry Division), the 9 Army Corps in one 58 division lost about 1,9 thousand people. The losses of the Austrian 17 Army Corps were much more significant. Only for 26-27 of August, troops of the Russian 3-th army captured 8 guns and more than 4 thousand prisoners.

Key to the success of the assault on Rava Russkaya was the fact that a group of corps - 21 army 3 army and 5 and 17 army 5 army - the attack from the north contributed to the abandonment of the fortified area by the enemy. 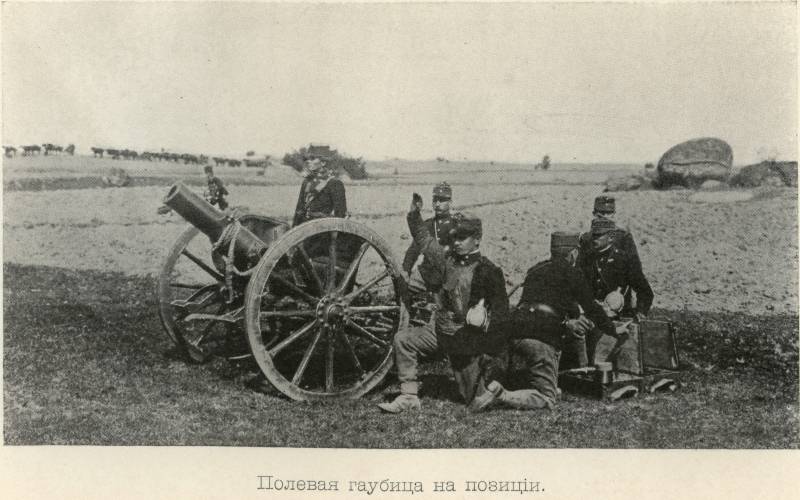 The operation on which the parties had placed such hopes ended.

Having interrupted the operation between the Bug and the Vistula, and concentrating more than 2 / 3 forces of the Galician armies on its right flank, the Austrian command attempted to crush the Russian 3 and 8 armies, taking possession of the Lvov region. This attempt, after six days of fierce fighting, as a result of a difficult strategic situation on the left flank of the Austrian 4 Army, ended in failure, despite the successes on the front of the Austrian 2, 3 and 4 armies. As a result, the Austrian 30 divisions were forced to hastily retreat, so as not to be cut off from the r. San from the north faced them with the threat of a flank strike from the Russian northern armies.

The official description of the 1914 campaign on the Russian front assessed the last phase of the operation in Rava Russkaya: “Despite the fact that everywhere we began to crowd the enemy, the latter did not abandon the idea of ​​a breakthrough between the III and V armies. As a result, a grand battle began at Rava-Russkaya. The 28 number was one of the hardest battles in the area that were meaningful to both sides. The enemy strained desperate efforts to break through our disposition and thereby save the position of the rest of his armies, who were in full retreat on the line r. Sana.

In turn, the Third Army, resorting to the latest resources, with the extreme tension of the spirit of its troops, exhausted by continuous battles for a whole month, continued to persevere in its mission.

28 August and the Rava-Russian Austrians were finally shot down. A general retreat of the IV, III and II armies of the enemy, retreating in the greatest disorder, with the loss of tens of thousands of people, horses and masses of military equipment began. ”

The main participant in the operation of Rava Russkaya from the Russian side is the 3-I army. On August 23, advancing towards Belgorai, on the approaches to the Rava Russkaya region, she received a strong counter-attack from the Austrian 4 and 3 armies. This strike forced the Russian army to stop and, for 4 days, unsuccessfully attacking the fortified positions of Rava Ruska to the forehead, expect results from the actions of the 5 and 8 armies, which were moved to support its flanks.

The main reason for the initial failure of the 3 Army was the incorrect orientation on the part of the front command and the unclear statement of the operational objective (the dual task of acting on Laschov - Ravu Russkaya). Accordingly, in seeking to secure themselves from the Gorodok position, bypassing the latter from the north, the army advanced in directions diverging from Lviv — which deprived its combination of the possibility of timely interaction. In addition, it attracts the 8 army to the Gorodok position. Such a maneuvering of the southern armies of the front to the north prevented the South-Western Front from making its own flanking maneuver.

DG Shcherbachev also noted that one of the reasons for the 3 Army to the north was the task of assisting the 5 Army, cramped by superior forces. But this is only part of the reason. More weighty was the fact that the command of the 3 Army made a number of operational and tactical blunders and organizational omissions. So, 22-23 of August (that is, at the crucial moment of the start of the operation) the army headquarters did not send a single operational report to the front headquarters. N.V. Ruzsky considerably constrained the initiative of his corps commanders. When the 25 of August, the main task of the army was the attack of Rava Ruska, then instead of a decisive attack of this point by all forces (i.e., three corps), the group was weakened due to the threat of a breakthrough on the site of the 10 corps - Shows the necessary hardness and determination.

At the same time, the lack of timely management response from the frontline command led in the first days of the operation to inconsistent actions of the 3 and 8 armies. In fact, when the Austrians managed to penetrate between them by August 29, the fate of the operation on the southern flank of the Galician Battle was in the balance.