What and to whom Trump showed a missile strike on Syria?

April 14 2018
331
An adventure, started by the United States in Syria, only at first glance may seem an adventure. In fact, the order given by Trump to the military, who themselves even a few hours ago stated that “it is worth waiting for evidence of the use of chemical weapons", Serves as the achievement of several goals for Trump himself, and for all of the United States.


firstwhat Trump has achieved showed the American top that he is a “cool cowboy” who “makes America strong again”. And the top, judging by the comments in the American press, is ready to accept Trump's "cool cowboy" for granted. It did not work with the “rocket man” Kim Jong-un - see how cleverly it turns out against the “animal Assad”. Incidentally, this is an involuntary signal to those states that refuse to develop nuclear technologies: there are no nuclear weapons - we will bomb you if your policy does not suit us ... Trump is trying to return to the format of what he holds his presidential word.

Second. This is the goal of the American military-industrial complex. It consists in doing everything to carry out an attempt to discredit the Russian air defense and missile defense systems. Signal of Saudi Arabia, Turkey, India and others - they say, think, guys, and not for nothing that you agree with these russians to buy them anti-aircraft missile systems? “We will still launch as many Tomahawks as necessary, and we will not be stopped.” At the same time it is a signal to us, Russia. The signal about how it is necessary to build an anti-missile defense system in modern conditions, which, as current practice shows, have nothing to do with what it was before. Although everything is common. They wanted to bomb the US Belgrade - bombed. They wanted to bomb Damascus - one-time, but bombed.

The third. The United States frankly admits that they wanted to spit on international missions, including the OPCW, on any investigations, and will do what stems from their own interests, even if they are contrary to common sense.

All this, by definition, can not be ignored.

The smoke from the missile strikes of the American-French-British coalition over Damascus: 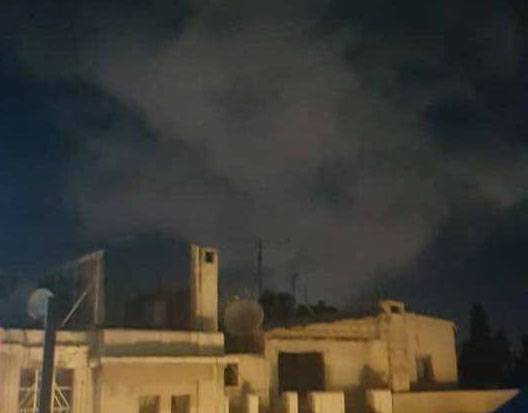