April 21 2018
7
Over the summer of 1920, the Red Army managed to win back the territories seized by the Polish Republic, and then went on the offensive and reached Warsaw. Owing to the successful actions of the Soviet fighters, Poland suffered the most serious losses in military equipment, which should be urgently compensated. The best method for this was the construction of improvised armored cars. Perhaps the most interesting example of this kind was the Bukowski armored car.


Seeing the current problems, the Lviv garrison of the Polish armed forces began to proactively develop new armored vehicles that could be built, what is called, here and now. The author of the idea was Colonel Cheslav Manchinsky. The project should have been implemented by employees of the Lviv garrison’s motor service. Using the available components, materials and units, they had to submit in the shortest possible time a ready-made armored car, able to protect the crew and attack the enemy with machine-gun fire.

The work in the framework of the new project was headed by the head of the automotive service, Major V. Ossorya-Bukovsky and Major V. M. Kohmann-Florian. In addition, other Polish servicemen made a significant contribution to the project. Thus, the armor case of the original design was made by military engineers sergeants Jozef Kuzilek and Julian Leskov. At a certain stage, the armored car got its own name. He was named after the chief designer - Bukowski. 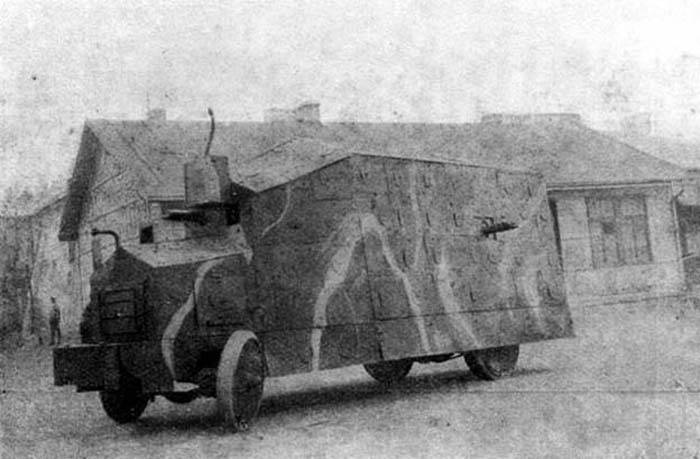 Armored car Bukowski. Even on a poor-quality photo the original design of the protected case is visible

In the early summer of 1920, the Lviv garrison did not have large resources, and therefore it was planned to build a new armored car solely from available components. An existing truck chassis was chosen as a basis for it. It should be installed on the armored body of a specific architecture. It was this design that led to the fact that the Bukovsky armored car became perhaps the most interesting Polish model of its class.

After the end of the First World War, a significant number of German infantry trench armor casters appeared in Polish warehouses. This shield was a curved armor plate with a small embrasure in the center. For additional user protection, the opening was covered with a movable cover. Own production of armor in Lviv was absent, and the specialists of the automotive service decided to protect the new combat vehicle with slightly modified infantry shields.

The basis of the Bukowski armored car was a Packard biaxial commercial truck purchased in the past from a foreign supplier. This machine had a load capacity of 3 t and was built according to the classical scheme with a rectangular frame and front engine placement. The used Packard did not have high performance, but V. Ossorya-Bukovsky and his colleagues simply had no choice and were forced to use only the available components.

The existing car was equipped with a gasoline engine with a total power of 32 hp. A mechanical gearbox was connected to the engine, providing four forward speeds and one reverse. The transmission link with the rear axle was realized through a chain transmission. Two bridges were equipped with a dependent suspension based on "traditional" leaf springs. The front wheels were driven. It was decided not to alter the wheels, which had a spoke construction and cast tires.

It was proposed to install a frame on the chassis frame, which was the basis for booking installation. It can be assumed that the small size of individual armor plates had a very specific effect on the design of such a framework. Moreover, its front end, which served as the basis of the engine hood, did not need a large number of parts.

According to reports, the frontal part of the body covered with "real" armor. Specially prepared rolled sheets of the desired shape, having a thickness from 3 to 9 mm, were mounted on the frame and formed a duct. The hood got a vertical front leaf with a triangular top. In its center were provided blinds to protect the radiator. The vertical sides of the hood ran parallel to the frame parts, and their height slightly increased towards the rear. On top of the engine covered with a pair of inclined sheets. In the sides there were service hatches, equipped with covers of infantry shields.

The entire habitable compartment of the hull, which was distinguished by its large size, was covered with exclusively processed German-made guards. The front of this compartment received divergent sides, the upper part of which was connected to the “gable” rising roof. Below the floor of the compartment were provided side screens covering the frame of the truck. The fighting compartment was equipped with rectangular sides, placed with some inclination inward. The roof consisted of two sloping panels. Behind the hull was covered with a vertical feed unit. The bottom screens of the habitable compartment provided protection for the frame and rear wheels.

The main details of the reservation of the conditional compartment of the control and the rear habitable part of the hull were made of the existing plates. Thus, the side of the fighting compartment consisted of four horizontal rows, with eight shields in each. A similar design had a roof and feed. In the manufacture of armor hulls, the embrasures of the guards retained the regular movable flaps, which gave the car a distinctive appearance.

Side view of the car

They decided to arm the armored car with four “Maxim” machine guns of rifle caliber with a water-cooled barrel system. According to the authors of the project, the crew of the Bukovsky should have been able to fire in any direction without moving weapons and turn the car. As a result, four machine gun installations were placed on all the main parts of the body. The first is located on the right side of the front sheet. Two more were in the center of the sides, with a slight shift to the stern. The aft machine-gun installation was on the same level with the frontal one and was also shifted to the starboard.

Each of the four installations allowed free shelling of a certain sector of considerable width. In addition, the possibility of shooting with noticeable elevation angles was provided, which was useful in the city. At the same time, it seems that the shelling sector of different machine guns did not overlap, leaving some dead zones.

Ammunition of four machine guns could consist of several thousand rounds. It was proposed to transport ammunition in ribbons in boxes on the appropriate shelves and racks inside the case.

The crew of the armored car Bukowski should include several people. One of them had to drive the car, four more were responsible for the use of weapons. Also, the crew could be supplemented with a commander, an observer, etc. Some sources mention that on board the armored car in some operations there were up to 7-8 people.

All crew members had to get into the habitable compartment through a single door in the stern of the hull. The opening under it had the size of four plates. In a combat situation, he should have been closed with a pair of swing doors. Due to the specific design of the base truck, the door was located quite high above the ground. For this reason, a small footboard was installed on the lower housing screen.

The driver could follow the road through a small hatch in the front plate. In addition, the embrasures of the control compartments could be used for observation. The airborne combat compartment consisted of 32 armor plates, which had their own embrasures. Three dozen small openings could be used for ventilation, observation or firing of personal weapons. Naturally, in a combat situation unused embrasures should be kept closed. Several parts of the roof were folded down - they served as additional hatches.

The armored vehicle designed by V. Ossorya-Bukovsky and V.M. Kohmann-Florianskogo differed rather large size. Its total length was 6,5 m, width - 2 m, height - 2,7 m. Combat weight reached 7 t and came close to the maximum capabilities of the existing chassis. According to known data, the relatively low specific power of the engine (no more than 4,6 hp per ton) made it possible to accelerate on the highway only to 25-30 km / h. Patency on rough terrain left much to be desired.

According to reports, the construction of the armored car "Bukovsky" began no later than the end of June 1920. Already in July, Lviv specialists, using a private car repair shop on Yanovsky Street, completed the assembly of an unusual sample. It can be assumed that the most difficult stage of construction was the assembly of a specific armor corps, mainly consisting of small metal plates. Soon after the completion of construction and inspections, the Lviv Automobile Service began full-scale operation of its own armored car. 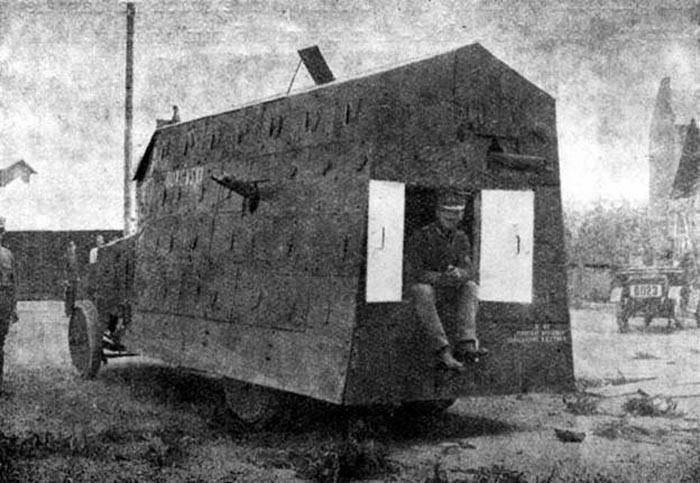 View of the left side and aft. Soldier personally demonstrates aft doors.

On August 14, an armored car commanded by Lieutenant Kruzhinsky replenished a small group of troops who were to defend Lviv from the advancing Red Army. However, during this period, the Bukowski machine was not able to participate in the hostilities. According to some reports, the armored car remained in reserve and was not involved in real combat.

Five days later, an armored car was transferred to the area of ​​Busk, where the 6-I Infantry Division of the Polish Army held defenses. The crew of the combat vehicle was to support the infantry with fire and prevent the advance of the Red Army. Over the next few days, Bukovsky participated in battles in different areas near Lviv. As can be judged by the surviving information, the armored car could not have a noticeable effect on the course of the battles. On August 23 an armored car took part in the defense of the village of Pikulovice (now Pikulovichi) and was seriously damaged.

Repair in the conditions of the front edge was not possible, and the armored car was sent back to the workshops of Lviv. The car went through the repair fairly quickly, but as far as is known, it never returned to the front. Due to certain circumstances, the further exploitation of such equipment in the framework of real army operations was considered impossible and unpromising.

According to various sources, the Bukowski armored car - the only car built on an unusual design of non-standard components - remained in Lviv until the end of the Soviet-Polish war. In the 1921 year, after the end of hostilities, it was restored and returned to service. The armored car was assigned to the 6-th division of armored vehicles. As part of this unit the car was listed for some time.

By the time the war ended, the Polish Army had managed to build not the most numerous, but ample armored troops. The army had the required number of various armored vehicles, and therefore no longer needed improvised handicrafts. As a result, no later than 1922-23, the armored car "Bukovsky" was written off and sent for disassembly. Whether his chassis has returned to the original role of a truck is unknown.

The main prerequisite for the emergence of the Bukowski armored car was the need for the fastest possible construction of any protected and armed equipment solely from available materials. The Lviv garrison car service did not have the capacity to produce full armor, but it had a solid supply of unnecessary trench guards. The idea of ​​using unusual components led to the appearance of a specific appearance of the armored car. He did not leave a noticeable mark on stories or on the battlefield, but still of interest as a curious example of finding solutions in limited conditions.