April 16 2018
14
Striving for world leaders, China is attempting to create weapons world class. According to the latest foreign press reports, Chinese specialists managed to gain new successes in the framework of one of the most daring projects. With the successful completion of current work, the air forces of the People's Liberation Army of China will be able to get a new air-based ballistic missile. Such weapons can significantly affect the strike potential of the Chinese long-range aviationIt is also capable of strengthening the air component of strategic nuclear forces.


The latest reports on the progress of a promising Chinese project came in a few days ago from the American edition of The Diplomat. His journalists were able to talk with an unnamed representative of the US government who has access to intelligence information on China. The source shared some information about the Chinese project, and also told about the recent successes of foreign experts. According to him, a promising rocket not only exists, but also managed to pass a series of tests.

As in many other cases, the official name of the new Chinese weapons remains unknown. In this regard, American intelligence officers use the temporary designation CH-AS-X-13, which reflects the country of the developer, the class of the product and the stage of development work. Most of the information about this product is either unknown to US intelligence or is not yet to be announced. However, some data are given in the open press. 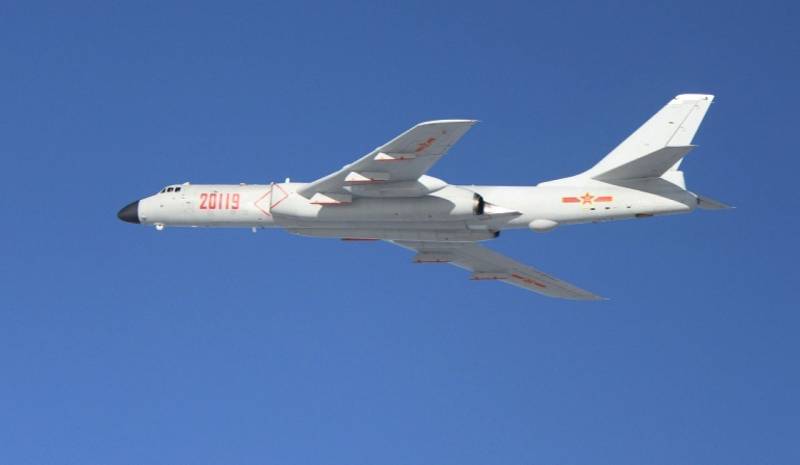 According to the source of The Diplomat, the CH-AS-X-13 rocket must enter the weapons complex of the upgraded H-6X1 / H-6N bomber. This machine is another development of the Soviet aircraft Tu-16, created by Chinese experts. With the help of the installation of some equipment and a certain modification of the design, the aircraft becomes the carrier of an aeroballistic rocket. The flight-technical characteristics of the H-6 bomber allow increasing the allowable launching limits of promising missiles with a clear increase in their combat effectiveness.

There are certain assumptions about the roots of the new project. So, the CH-AS-X-13 rocket could have been developed based on the existing DF-21. The latter is a medium-range ballistic missile used with a mobile launcher. Perhaps, the Chinese designers reworked this product, thanks to which it received the opportunity to start from an aircraft carrier. To solve such a design problem, serious processing of the base product could be necessary. However, it cannot be excluded that the aeroballistic rocket is a completely new development based on known solutions and components.

The Diplomat writes that the new rocket is built on a two-stage scheme. In the design of both buildings can be used composite materials, allowing to reduce their weight. Lightweight design should reduce the load on the carrier, allowing you to get certain advantages. Also, the product must have a detachable warhead with a warhead of one type or another. On both stages of the rocket used solid fuel engines. In general, the new aeroballistic missile may be similar to some other Chinese-developed weapons.

Exact information about the type or power of the warhead is not yet available. At the same time, the unnamed government sources The Diplomat indicate that the Chinese rocket will be able to carry a nuclear warhead. Whether the missile version is being worked out with a conventional warhead is unknown.

Due to the launch from an aircraft carrier, providing the initial acceleration and recovery to a certain height, the two-stage rocket can show high combat characteristics. American intelligence officers believe that the CH-AS-X-13 product with an air start can deliver a warhead to a distance of 3 thousand km from the launch point.

According to known data, the project of a promising aviation missile with the symbol CH-AS-X-13 has already left the design stage, and now Chinese specialists are busy testing new weapons. Sources The Diplomat in the US intelligence claim that the first flight of the H-6 bomber, which became the first carrier of an experienced aeroballistic rocket, took place with such weapons in December 2016. At the same time, they did not specify at what test site such tests were carried out, and how the rocket showed itself. In fact, only the fact of the first launch at the end of the year before last is known.

During the past 2017 year, rocket planners and the air force carried out three more test launches of experienced missiles. Any technical details remain unknown. The place, time and results of checks are also not specified. The fifth test launch was held at the very end of January. It is curious that information about the fifth trials became the actual reason for the wave of publications in the foreign press.

American intelligence either does not have detailed information about the Chinese tests, or is in no hurry to share them. However, some features of the last two launches were clarified. In them, the carrier of the experimental product CH-AS-X-13 was the long-range bomber H-6K - one of the latest modifications of the aircraft, capable of carrying modern missile and bomb weapons, as well as equipped with equipment for in-flight refueling.

The situation with the bomber H-6X1 / H-6N, which allegedly will become a regular carrier of an aeroballistic missile, is not completely clear. At the end of the summer of last year, photographs of a previously unknown modification of a fairly old bomber were published, but exact information about it was not reported. Soon there was a version explaining the goals and objectives of the updated aircraft. It is assumed that he should be the main carrier of the CH-AS-X-13 rocket.

Apparently, while the aircraft carrier and the promising rocket for him to be tested and show their real capabilities only within the landfills. Like any other new development, they need full-scale tests that require a certain time. Sources publication The Diplomat argue that the rocket CH-AS-X-13 can enter service with the Chinese air force only in the middle of the next decade.

An aeroballistic rocket with high performance will be able to most seriously affect the strike potential of long-range aviation of the PLA. According to various estimates, the H-6 bombers of the latest modification, adapted for the use of promising missiles, will have a combat radius of 6 thousand km. Thus, in ideal conditions, such an aircraft, using the product CH-AS-X-13, will be able to attack a target at a range of about 9 thousand kilometers from its base. At the same time, a combat unit of sufficient power capable of inflicting significant damage to the enemy will be delivered to the target.

It is already noted that the emergence of medium-range aeroballistic missiles will become a serious threat to a potential enemy. Such a weapon compares favorably with the aviation weapons of other classes and has certain advantages over them. Thus, the range of independent rocket flight at the level of 3 thousand km will allow the rocket carrier aircraft not to approach the enemy air defense zones. Moreover, in some circumstances, the launch and launch of the missile may not be noticed. All this increases the combat survivability of the aircraft and the likelihood of full implementation of the task.

Shortly after launch, the CH-AS-X-13 rocket should go onto a ballistic trajectory. Like some other strike systems, it rises to a considerable height, after which the dropped combat unit continues to move to the target by inertia. On the descending part of the trajectory, the head part must accelerate to high speeds, making it difficult to intercept. In this respect, the aeroballistic article may show a higher survivability compared to cruise missiles.

As far as is known, a promising product, so far known as the CH-AS-X-13, may become the first middle-class aeroballist missile adopted by the People’s Liberation Army of China. So far, its air force does not have such weapons, which clearly affects their potential. The emergence of a fundamentally new system with high technical and combat characteristics will lead to understandable consequences of a military-political nature.

Even a quick glance at the globe allows us to determine which areas can be “on sight” of a promising missile with a range of 3 thousand. At the same time, we should not forget about their carriers, which are able to make a launch line on 6 thousand km from their airfields. Thus, under the control of the H-6 bomber of the last modification, armed with CH-AS-X-13 missiles, the entire Asia-Pacific region and part of the surrounding areas are located. It is not difficult to present a list of countries that will be concerned about the emergence of a new weapon in China.

However, while the situation does not look threatening and allows not to panic. According to available data, the Chinese project CH-AS-X-13 is currently at the testing stage of prototypes, which will continue for several more years. If the information of the American press is true, then the new rocket will be able to go into service only by 2025 year. In the remaining time, all interested countries will be able to study the situation, draw up their plans and take certain measures. In addition, in the near future, there may be new information about Chinese development that could affect the search for solutions.

It is curious that at the moment the Chinese project of an airball ballistic missile is not unique. A few weeks ago, the Russian leadership for the first time spoke about a domestic project of an aeroballistic rocket called the Dagger. According to official data, a characteristic feature of this product is hypersonic speed at the final leg of the flight, which increases the combat effectiveness and virtually eliminates successful interception. In this case, the rocket has a relatively small size, so that it can carry an interceptor MiG-31BM.

As it turned out, in parallel with the creation of the Russian project, design work was carried out in China. The new rocket for the PLA Air Force was tested last year, and as far as we know, is still at this stage. To date, five test launches have been completed, and it should be expected that new reports will be received in the near future to conduct such tests. Further work may take several years, after which the product CH-AS-X-13 will get a chance to go into service. Whether the new Chinese project will be successful, and whether the air force will succeed in obtaining a fundamentally new weapon with high potential will become clear later.