His Majesty weapons of mass destruction 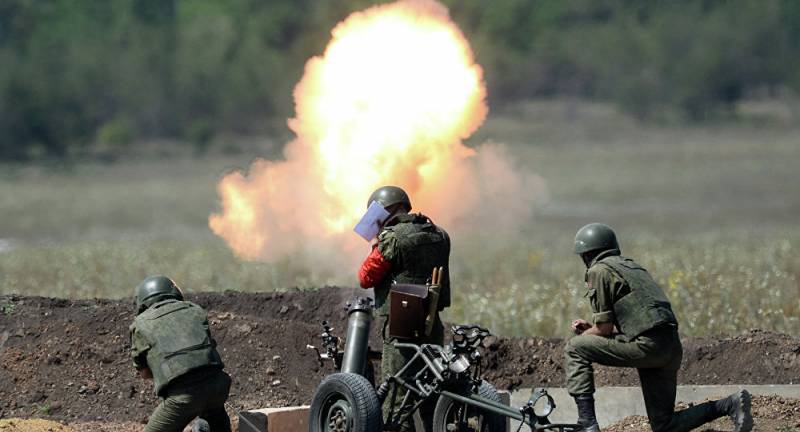 There is a concept "weapon mass destruction. "We understand this phrase primarily nuclear, chemical and biological weapons. That is what, in theory, you can easily destroy all of humanity.

But let's think: is it right? Do these types of weapons really carried away and continue to take human lives every day? It is rather a weapon of a hypothetical war. What can theoretically, but in reality, people are killed very differently.

What is the most terrible weapon in the Donbass in capable hands today? In Syria? In other hot spots? Machine? Sniper rifle? Tank? Cannons

Alas, but most of all soldier’s (and not only soldier’s) lives are taken by mortar fire. That mortar should be called a weapon of mass destruction.

But this weapon appeared thanks to the Russian military engineering education and the Russian ingenuity! Appeared a little more 100 years ago.

History its creation is worth remembering, and we will do it with pleasure, since the mortar talk, like the mortar shelling, will be long and thorough.

Russian-Japanese war. The defense of Port Arthur. The Japanese, having failed to knock out defenders by attacks in the forehead, began a siege using engineering structures. In a short time, with the help of sap, they approached the defenders so closely that in some areas they talked with the Russians without raising their voices. At the same time, "on the surface" of the Japanese soldier could be seen infrequently. Trenches, trenches, capped slits, dugouts ...

The use of artillery in such conditions is impossible. Too great risk of hitting on their own positions. However, the proximity factor helped the Japanese in the attacks. Practically sailors fought off attacks on bayonets.

The most dangerous place in the defense was fort number XXUMX. It was there that the breakthrough was being prepared. And in the early November morning, when the Japanese continued to prepare the attack, the Russians suddenly began shelling.

The soldiers answered all the questions of the officers who came to inspect the unexpected results of the shelling: "Flying death", "sings the song of death". In principle, the lyrical component is good, but the morale of the Japanese was lower than nowhere. And the results of the shelling were impressive. Destroyed bunkers, loose trenches, collapsed saps. The usual weapons could not inflict such destruction.

But what was the surprise of the Japanese officers when they brought the shank from the projectile. A shank similar to those used on torpedoes! And the next soldier was holding ... mine! What is it that Russians use some land torpedoes filled with mines?

In fact, we have simplified a little, otherwise it would be all in mines. Torpedoes as such have not yet been. There were the mines of Whitehead, their dad / mom. Which were launched from mineboats, destroyers and destroyers.

Nevertheless, the Russians in Port Arthur did invent something like that. How else to explain this set: the ridiculous parts of a mine case and the destruction caused by them? 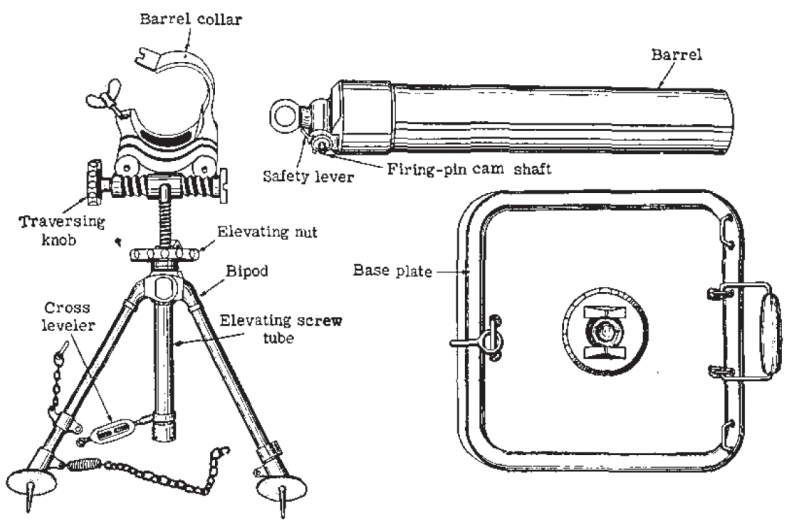 The most interesting thing that invented by our compatriots hasn't changed much in 100 years. 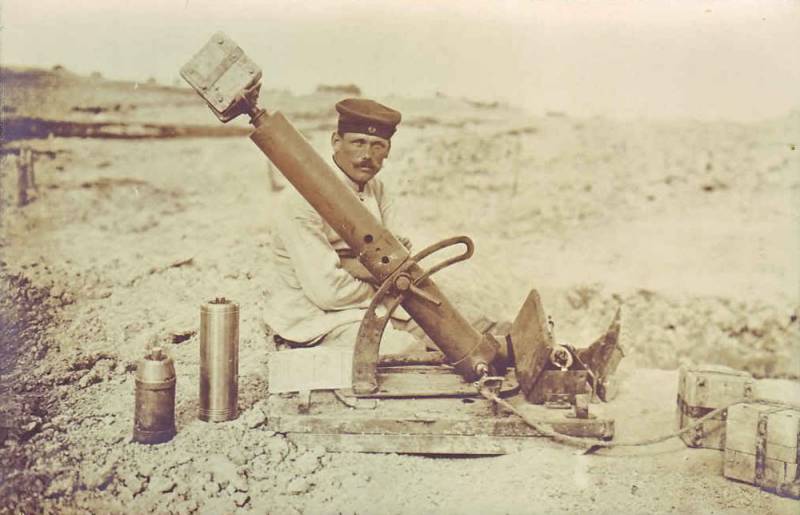 And what about the "death song"? The fact is that soldiers and officers on the front line quickly get used to the sounds of battle. They distinguish the caliber of a bullet, projectile or mine by the sound. They can predict the approximate location of the fall of the ammunition. Exactly the same was with the defense of Port Arthur. The siege and ship guns of the soldiers did not care at all, the usual "street noise".

But here the death song appeared. And it began with a deafeningly sonorous note. At the limit of human perception. Then a high sound rang in the air and sort of. And this high, vibrating sound was often the last thing the Japanese heard. "Flying death", "death song" ... orientally poetic and scary ...

Who is the author of this miracle weapon? There are two authors. There are a lot of disputes today, but we are adherents of the version which says that the mortar was invented by the midshipman Sergei Nikolaevich Vlasyev and captain Leonid Nikolayevich Gobyato. More precisely, the midshipman came up with the idea, and the captain-engineer implemented it.

I am sure that many people know the miracle (from our point of view), or the monster (from the Japanese) that they have created. But stories about great weapons do not happen much.

Ship 47-mm guns in defense ineffective. "A bit small kolchuzhka," as the blacksmith said in Alexander Nevsky. So the midshipman decided to make it more powerful. And the head of the workshops helped him.

First of all, the gun was cut. Then installed on the wheeled carriage and ... everything. The short carriage allowed the cannon to be installed in firing trenches with high elevation angles. It would be foolish to speak of a gun "edging" as a brilliant invention. It's just a mortar, right?

Mortar has been known for more than one hundred years. And its steep parabola, which allows throwing a projectile through the walls of the fortress.

Genius is further, in a mine. So, in ship workshops from sheet iron riveted hull min in the form of cones. They stuffed it with pyroxylin and installed a fuse - a pilot glass. Talking about some caliber with this production, you know ...

Then they took the pole. The lower end of the pole was thickened. Mounted on it freely moving impeller stabilizer. And after that the pole was attached to the mine, and in such a way that the impeller was moved to the body. In order to move the impeller after the shot to the end of the pole, ordinary rope is used. Everything! Here you have a brilliant device of the world's first mortar.

Next is Russian savvy. The gun was charged with an ordinary sleeve. But with a secret. The sleeve was covered with a wooden insert with lead wad. Mina obtained over-caliber. A shot, a cork throws out a mine ... Brilliant!

As the midshipman and the captain reached the stabilizer, the main task of which is to turn the mine so that it just hit the fuse on the ground - no one will know. 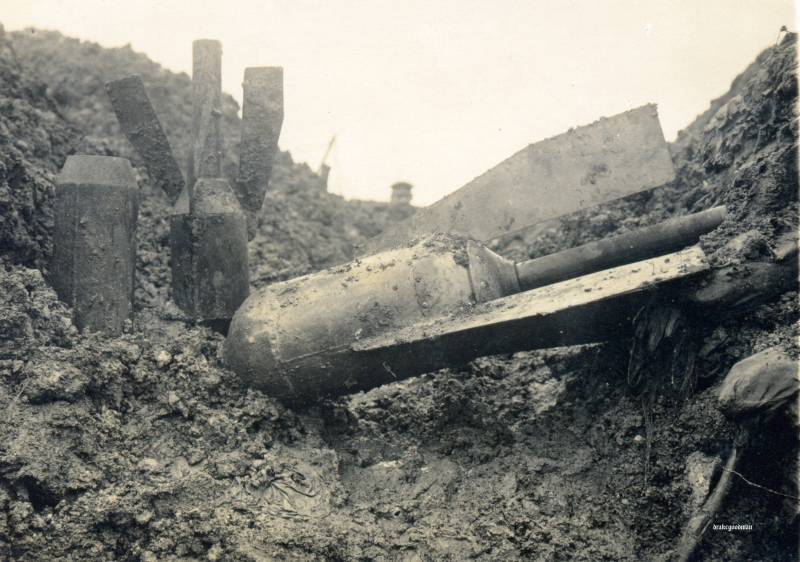 By the way, the mortar clarified the fundamental difference between the attitude of the Japanese and Russian soldiers to arms. "Flying Death" for the Japanese turned into a "Frog" for Russian. Not a weapon wins. The warrior's skill and fighting spirit wins.

Alas, our country and in those days did not differ quick response. The new weapon got into the meat grinder of bureaucratic approvals and successfully “stuck” there before the First World War. And only at the request of the Supreme Commander-in-Chief of the Russian army of Grand Duke Nikolai Nikolayevich "The infantry insistently demands mortars, considering them to be his artillery," the war minister, General Sukhomlinov, began producing mortars in Russia.