April 14 2018
34
Most often, attention is attracted by tendentious films that have fallen to a film festival, which caused a major scandal or were simply shot under the budget's cut, clearly tangible at the final zero result. But there are less odious paintings, it would seem, only for internal use. But these films are also important, because the informational era, which was supposed to push the boundaries and grant freedom, turned out to be comprehensive, but rather manageable in a short period of time. In this context, even the tapes that are abstract from politics for “internal use” become excellent markers of what is in trend in the society of a particular country or, respectively, that they are trying to impose on this society. And since Hollywood is any knee-deep sea, so history by shifting accents and repeating a small lie over and over again you can change it in the public consciousness.


The film “The Foes” of American production, charmed by “independent” critics, that 5 rubles go on market day. a bucket came out in our rental a couple of months ago. The picture is a seemingly endless road western, whose narration is moved to the end of the 19 century. Severe as a thundercloud, Captain Blocker (Christian Bale) gets his last assignment - to transport the former leader of the Yellow Hawk from New Mexico to Montana, where the latter will have to give ends because of cancer. The authorities, therefore, want to show humanism, because in the endless expanses, cleared of savages, settled so many unsuited American scum that you need to roll out the crowd at least something to show.

The blocker, as a direct participant in the war with the Indians and with the Yellow Hawk himself, frowns and strums his boots with his boots, but eventually sets off. As if stupid and senseless risk that the brave captain, even without waiting for the photographer, and the destination, chop the leader along with the wigwam into a small vinaigrette, is not enough, the authorities equip the captain with a truly Panopticon detachment. The model squadron 1890 includes exemplary southerners (as the southerners love northerners, it feels even now, and the 25 godkov after the war, it’s true, the relationship was just a song), negro, pardon, African American with corporal and a couple of excellent northerners.

I, of course, understand that hiring consultants-historians is not comme il faut today, because these scholars are bored out of the way to cut off the flight of creative thought at the root. And, of course, I understand the desire to push together mutually exclusive figures by any means in order to create an emotional, saturated film room. But if earlier this was done a little more elegantly, which smoothed down inaccuracies, the characters themselves were introduced into the plot gradually, and the heat of their opposition was delayed by the viewer's attention. In this tape, a gang of dubious types are introduced into the plot immediately, either by referring to the stupidity of the authorities, or to the stupidity of the viewer. Yes, and the saturation is not visible, as these depressed and apathetic fighters do not conflict with each other completely, recalling a bunch of faded dandelions with dull and rare talk.

Moreover, the viewer begins pouring out tolerant pink mucus from the skull boxes of those who, according to all the laws of life, having passed through the crucible of war and having long ago crossed that youthful age threshold of character changes, should be hard and tough as steel. And the descendant of the Southern Cross fighters plays the first violin. Thus, director Scott Cooper does not even try to show the evolution of the beliefs of his characters, or he understands that he cannot do this, or he is busy with another task. It seems to me that the latter is closer to the truth.

In the meantime, according to the laws of the western, the squad continues to move toward the cherished goal, simultaneously embedding in gunfights, losing even the most fragile characters and acquiring new ones so that this company, resembling a group of anonymous alcoholics, does not fall apart. This, by the way, is extremely important, because not one of the actors alone is capable of drawing the picture. And it's not about acting talent, but in flat dialogues. 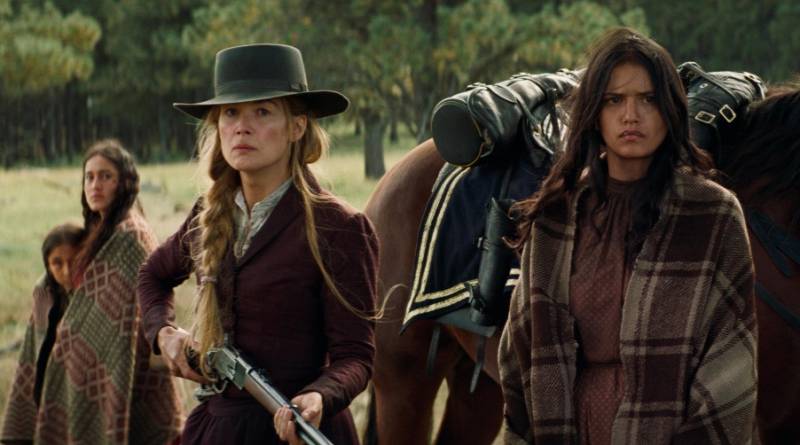 We ourselves are not local ...

The new members of the support group are the war criminal Sergeant Wills (Ben Foster), who needs to be brought to the place of execution, and the young lady Rosie (Rosamund Pike), who lost the entire family during the attack of the "wrong" Indians on their ranch in the backwoods. At the same time, after the entire movie was watched to the viewer, that the Wild West is the most dangerous place, the natural question arises, is the Rosie family clinical idiots? Why settle down in complete solitude in the middle of a wasteland teeming with American freedom for the full program? Maybe something influenced them, or are they missionaries? There are no sensible explanations, again everything is written off either to the stupidity of the character or the viewer.

The main thing is that the most insidious and evil comrade (because white) of the whole picture performed by the very charismatic Ben Foster, who is prepared to play the role of an antagonist, is most interesting. First, in his words one can feel at least some serious truth of life. Secondly, he looks like a living person, not a frozen mouthpiece of world peace. Third, there is a bit of logic in his actions, apparently for a change. 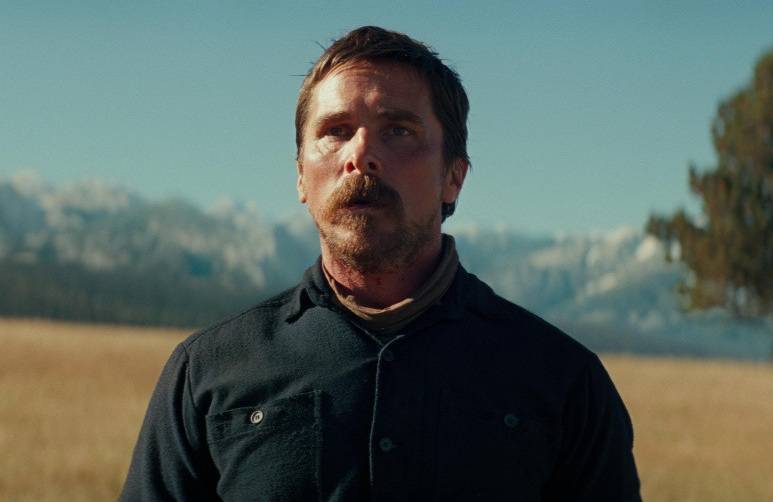 At the same time, the completely understandable mutual hatred of the escort leader and Captain Blocker gradually disappears. It disappears for reasons unexplained and practically not reflected in the film. Apparently, because after each battle the captain went out with a reinforced concrete face and with a mustache brush to admire the landscape with sadness in his eyes. However, the whole blocker film is walking with a reinforced concrete face. 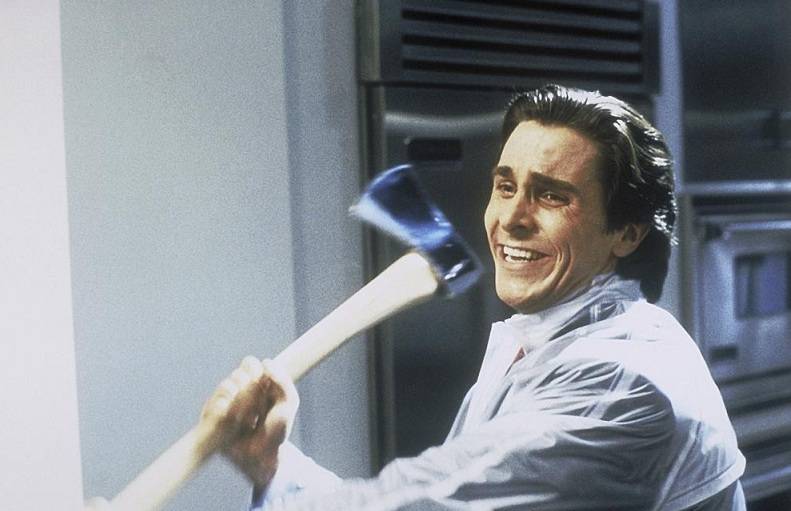 Christian Bale in the film "American Psycho" - the guy can play, just play, apparently, nothing

At the same time, in order to ignite the fog of intellectualism and the supposedly new look at the empty and dreary to the toothache plot, the film is filled with stingy long shots that do not pay off with explosive dialogue, some kind of revelation or catharsis. And it turns out, because after the domination of clip paintings and momentary premieres, even a simple instrument of the fundamental film, which is a long frame, like Tarkovsky’s, can be given for the movie itself. Why not? Give a fool a microscope and a bathrobe, you see, and it will come down for the scientist.

So why do critics suck up new creative faces and some director's finds from an extremely awkward picture? We will not build conspiracy theories and talk about the rampant engagement of both our and the hardcore critics. Although it is extremely curious to observe how the tape, which earned 50 percent of positive reviews abroad, in our penats easily passes the mark in 70. And if over the hill "love" by two-thirds, then we expect a friendly "odobryams".

First, they often talk about a new look at the western. But this film is not Western at all. He only pretends to be Western in order to push the lean drama with a pretense to festival brooms in contrast to the withering genre.

Secondly, some people went into ecstasy because “the Americans repented to the Indians and recognized the fact of extermination.” As I have already said, modern cinema is working to create a trend, clean visibility, a beautiful label for the public consciousness, which does not tend to delve into the contents. Look at our Krivorukov filmmakers, so we repent for Stalin all day and night, though the rating of Joseph makes the demoschiz jump up at night in a cold sweat.

In addition, "repentance" came out fantastically crooked. The very extermination of the Indians is present only in the mouths of soldiers who were inhibited by some post-traumatic syndrome, apparently, so as not to injure the thin soul of the inhabitant. All this is blurred by a thick layer of reasoning about duty and orders (something Nuremberg was remembered). No, of course, one white sergeant has been given up to be devoured by tolerance, but the US will judge him, so it’s possible. In the picture there is no trace of such realistic, domestic, and therefore most frightening scenes, like a line of drunk aborigines behind a bottle, like endless herds of broken bison, to cause hunger, etc.

Thirdly, the last attempt to draw the viewer into this surreal holiday of tolerance are the landscapes that supposedly became heroes of the picture. Landscapes are really wonderful, they are quite pulling at the gift set of cards “The virgin nature of the Wild West”, but no more. To landscape became the hero of the picture, he must be tied to the plot. For example, as in the film “The Survivor”, the mountain of buffalo skulls in the middle of a tailed taiga perfectly complements the very spirit of the picture, and the main character. 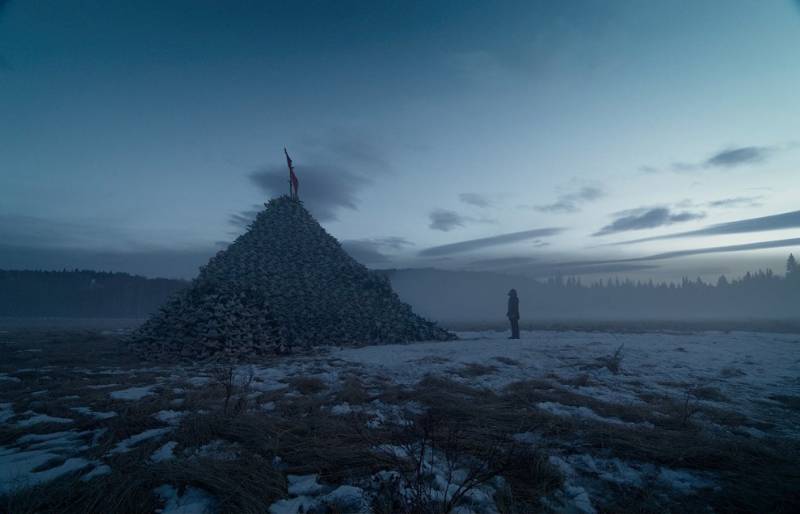 Frame from the film "Survivor"

As a result, we received a pretentious empty motion picture. The additional comicity of which is added by the fact that the anthem of tolerance with pink unicorns defecating a rainbow tried to sing in black metal with brutal seriousness, periodic scenes of bloody mash and absurd facial hair. 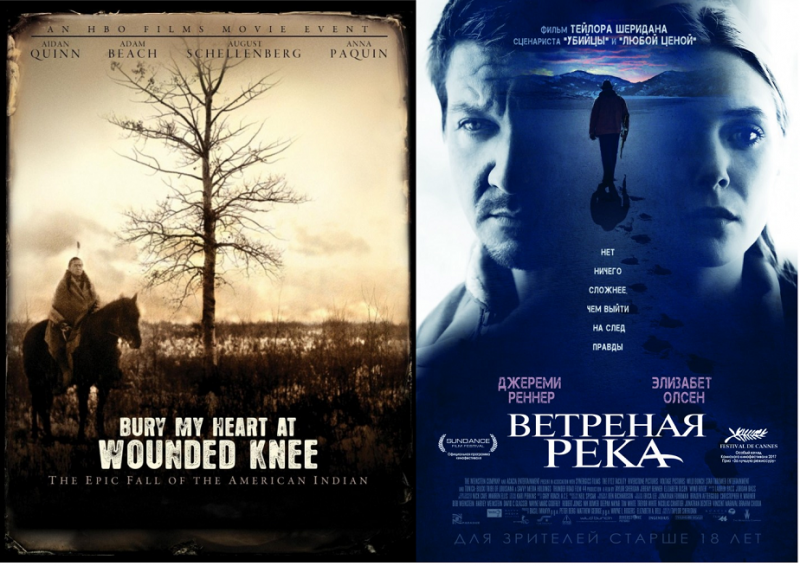 More worthy replacement of this agitation

The main thing is that, under the screech of innovation, dust continues to be covered with much more worthy work, both on the theme of the war with the Indians in the past, and on the subject of sluggish extinction in our days. The TV drama “Bury my heart in Wounded Knee”, which is absolutely unknown, is also unknown; a completely new acute socially tape “Windy River” has also sunk into oblivion, revealing the current situation of the natives. Perhaps these “confessions” were inconvenient?

Ctrl Enter
Noticed oshЫbku Highlight text and press. Ctrl + Enter
We are
Reports from the militia of New Russia for 27-28 September 2014 of the yearResults of the week. "Well, do not change me because of every idiot!"
Military Reviewin Yandex News
Military Reviewin Google News
34 comments
Information
Dear reader, to leave comments on the publication, you must sign in.