And laughter and Gref! Were aiming at VTB, and hit the Sberbank

April 13 2018
44
Today, for the first time since the next US vaccination, the ruble has won a few kopecks for the dollar and the euro. Russian securities, notably Sberbank and Gazprom, also noticeably won back. Apparently, among other things, because they are not in the notorious list of those who are guilty - those who are guilty for wanting to eat in America! Almost like Krylov. 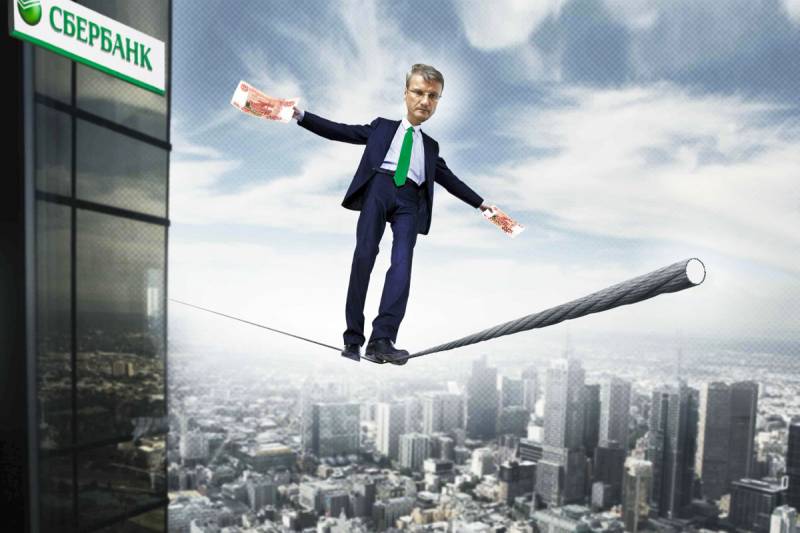 According to the results of the exchange Thursday, a very good moment has come to count the first wounds. So, in four trading sessions, the national currency lost about 10 percent at the rate. In terms of annual, this could be regarded as a catastrophe, but the decline will certainly be local and not protracted. With stocks, everything is much more confused. It seems to be a serious loss suffered literally everything that is understandable: in the global economy, and even more so in the Russian, everything is interconnected.

However, why only the structures of Oleg Deripaska really turned out to be among the leaders of the fall from the new sanctions list, it is not so easy to understand. Yes, it is possible that the peculiarities of trading in volatile metals, and also the psychological readiness of foreign stockbrokers to play against one of Putin’s closest associates and almost “Putin’s wallet”, have an effect here. However more interesting история with shares of Sberbank. Once, right after the reunification of the Crimea with Russia, it should have been very painful for Sberbank, they just had to hit the so-called sectoral sanctions. They were addressed specifically to the financial sector of Russia, and their consequences can now be regarded as one of the factors that have become the strongest incentive for large-scale banking cleaning in the country. If you want - even a sweep.

Recall that then Sberbank was threatened with a blow not only from the West, but also from the south - from Ukraine. There, four years ago, they decided to crack down on all branches of all Russian credit organizations. And then the very first blow to the self-styled Kiev authorities came, of course, against the Russian Sberbank. The defeat of offices, drenched paint ATMs, constant duty at the door of some "patriotic citizens" who shout out to the incoming: "Sold to Muscovites!"

It’s clear that the authorities had nothing to do with it, at the offices of Sberbank they even exhibited reinforced police posts, but there was not much sense from them. It was in those days that the "image of the enemy", which was carefully fostered in Ukraine after the Maidan, acquired yet another very piquant feature. It was no longer a padded jacket, and not a gangster hung with grenades, settled on the armor tank, and also an elegantly dressed office worker, categorically not wanting to communicate on a mov.

The largest and, frankly, the Russian bank that worked best in Ukraine was not helped either by the fact that its leader did not tire to remind the Ukrainians that his bank was not working in the “burning” Donbas. I wonder if Sber will ever work there? However, it is clear that Mr. Gref was not at all afraid of the Ukrainian sanctions - it was not so expensive to close several offices in the “Square”, but the headache turned out to be much less. But from the European Union and the United States for work in the Crimea and in Donetsk with Lugansk Sberbank certainly could get what is called, in full. Only today it is not entirely clear, but was it worth it to be afraid at all? Has it happened anyway? And after sectoral sanctions, the same head of Sberbank may well run into personal ones. Or, perhaps, he is still, like the "privatizer of all Russia" - untouchable?

Sberbank itself then managed to survive, although its leader German Gref had to withstand the real press from the Russian media, which threw him in the face: “You are leaving!” And Gref also got very harsh accusations of lack of patriotism for refusing to work in Crimea, in the Russian Crimea. In the end, in the stock price, then Sberbank did not lose as much as it was possible to fear. And, I won back the losses rather quickly and besides with interest.

Now, although Herman Oskarovich is not on the Washington list, the quotes of Sberov's shares have collapsed, for example, right away on Monday by 19 percent. At the same time, VTB, whose chief, Andrei Kostin, has lost only 9 percent in the weight of securities, precisely under sanctions. By Thursday, these figures relative to the last pre-week week were, respectively, minus 18,4 and minus 7,7 percent. One wants to ask the stockbrokers: where is the logic, where is the mind?

It’s too early to draw conclusions regarding the VTB and Sberbank shares. The first conclusions on the market as a whole are on the surface. So, there is again hope that the ruble will not only stop falling. Perhaps, he will even continue to win back something from his opponents. There are good chances that there will still be a demand for government debt, moreover it will be at quite decent quotes and at decent interest rates. What can be said for sure: there will be no repetition of the practice of four years ago, and even more so what happened on 20 years ago, when the treasury borrowed everything they gave, and almost under any conditions.

In the meantime, television, apparently with the help of financial experts, almost rubbing its hands once again accused a more or less prosperous public of financial illiteracy and wrong behavior. Like, here, citizens, as soon as the ruble exchange rate fell, rushed the euro and dollars to buy. What do you want? Almost three years have taught the people from the same TV screens to the fact that financial stability is about to come, inflation will be almost zero, credit rates will decrease, and it is necessary to grab a mortgage before it is too late, or else it will rise in price. And they didn’t just teach them - they really kept the ruble at such a level that very few people wanted to buy the currency. However, very few people could.

On the same days, the people with the purchase of currency were in a hurry, because it is not possible to be in time at all, especially since the situation in the world does not convince anything else of the opposite. The calming statements from the same Central Bank, the Ministry of Finance, and even more so from the head of the cabinet of ministers, seem only annoying to the public, and her determination to decide the fate of her own savings from them is only strengthened. The people are simpler and did buy the habit of salt and matches, but did not save their money. Most likely only because he has nothing to save by and large.

It remains to recall that not so long ago, a well-known leader told the workers somewhere in the outback that "there is no money," and we must "hold on." Now he generously promises to help the oligarchs who are financially affected by the sanctions. What, so quickly money appeared? We earned on oil or just the Central Bank printed them? The latter really will not rust, he did not only manage to draw billions under the purchase of gold so that no one noticed. Also under the reorganization of banks, which, in fact, turned out to be poorly hidden and very doubtful from the point of view of law, nationalization. Again, no one noticed ...

Ctrl Enter
Noticed oshЫbku Highlight text and press. Ctrl + Enter
We are
Situational analysis of the death of the MH17 flight (Malaysian Boeing 777), made on the basis of engineering analysis from 15.08.2014Results of the week. “In our cooperative, the board is always agreed”
Military Reviewin Yandex News
Military Reviewin Google News
44 comments
Information
Dear reader, to leave comments on the publication, you must sign in.