April 30 2012
6
History create
The beginning of the 40's. 22 th aircraft plant, in accordance with the resolution of KO No. 230 of 29.07.39 of the year, goes into January 1940 of the year to manufacture aircraft of the SAT of the modernized version with M-105 engines installed, and two months later with M-106 engines. Motors ensured the speed of the aircraft in 500 km / h and flight altitude up to 6.5 kilometers. 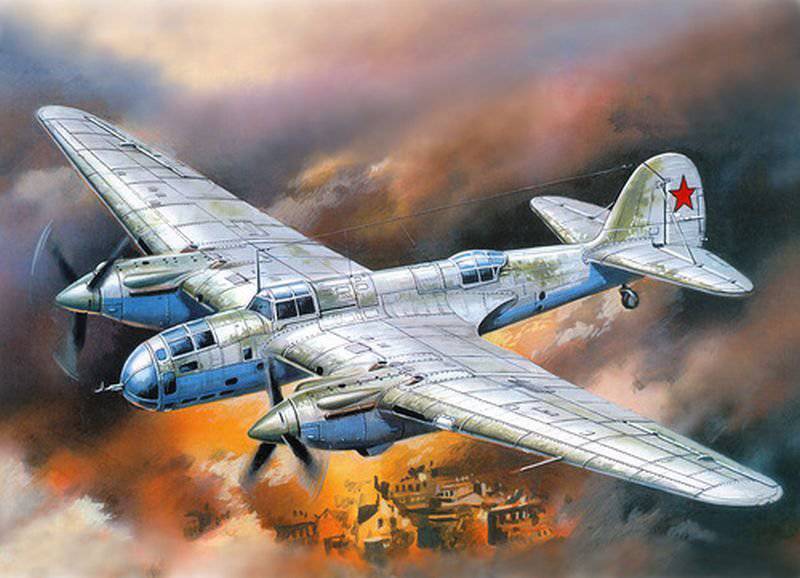 The next decree No. 240 of 01.06.40 of the year obliges the designers to test the 3 of the SB aircraft with the M-105ТК-2 motors installed by early September. But the difficulties that arose did not allow in time to equip three aircraft with new engines. New engines received two of them, and none of them passes the tests. Turbochargers "did not go" on other test samples. The production schedules for high-altitude aircraft were highly corrected. The design bureau of A.Arkhangelsky was to test two SB airplanes with the M-105ТК-2, and one aircraft with the 2М-J05TK-2 to send for state tests, after which, immediately start making 20 of the SB airplanes 2М-105ТК-2, and start producing 2 aircraft of the 103М-104ТК-103 SB-11-248-2-103-XNUMX-XNUMX-XNUMX-XNUMX-XNUMX. trials. And to speed up the installation of the turbochargers on the SS with XNUMXМ-XNUMX motors. In addition to work on the engines and turbocharger, there were other developments and tests - weapons systems, equipment and bombing. Flight tests were carried out, during which the dive of aircraft, equipped with M-XNUMX and M-XNUMX engines, were worked out. To ensure the bombing of the pick, a bomb stop was developed to get the aircraft out of the dive. It was installed on the serial aircraft SB number XNUMX / XNUMX, with installed engines XNUMXМ-XNUMX.

In mid-July 1940, military tests of 5 SB with 2M-105 engines and VISH-22E propellers and several DB-3 with VISH-23 propellers, made in a dive version, began military tests. The 2nd SB-RK sample number 1/281 was equipped with the first copies of the brake movable grids and a Ju88-type assault rifle to exit the dive. This equipment began to be produced at 213 plants located in Moscow. Since July 27, this aircraft passed 2-week tests. In addition to diving bombing, rockets started firing from aircraft. According to the results of these tests, missile weapons systems for aircraft began to be developed in a forced mode. Aircraft armed with rocket batteries, in a dive at an angle of 45/60 degrees, would have to destroy such armored and hard-to-reach objects, such as Tanks, river and sea-based ships, etc. RBS systems were executed for 82, 132 and 203 mm caliber ammunition. With the standardization of missile ammunition, it was possible to replace warheads with armor-piercing performance with concrete-piercing, which would ensure the destruction of protected fortifications. Objects with conventional protection - gun mounts, vehicles, air defense facilities and manpower, were planned to be destroyed with 132-mm high-explosive-type rocket shells. The main advantage of RBS over the same bombs is the increased accuracy of hitting from a dive and the power of warheads. The production of firing involves the use of a volley of two, four, eight and one shells. It was volley fire that was most preferred when shooting RBS. The main carriers of the RBS systems were to be “I-15bis”, “I-16 with 8 RBS of 82 mm caliber”, “SB aircraft with 22 RBS of 132 mm caliber”, DB-3 with 9th RBS of 203 caliber mm Placement - wing and fuselage depending on the aircraft and its purpose. Installation and dismantling of launchers with RBS on the aircraft - 1-3.5 hours by technical personnel. 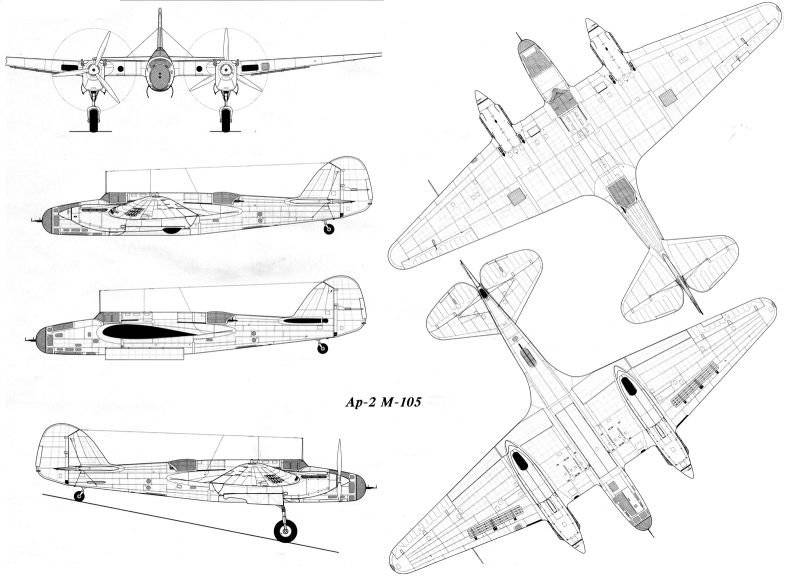 Testing of the SS aircraft number 221 with missile armor-piercing and fragmentation shells RS / RBS - 132, installed under the wing of the aircraft took place at the test site from 26.06.40 to 04.08.40 of the year. Shooting in a dive with angles of attack 45-50 degrees, the range of use weapons 1.5-1.7 kilometers. The CBS of the RBS-132 shells turned out to be less than the CBC RS-132 1.4 times - 30 (39) meters in the lateral direction, 39 (55) meters in range. And although the shooting was deemed successful, the RBS-132 was forbidden to be used from airplanes - when launching projectiles from a jet of gas, the aircraft ailerons were deformed. It was not advisable to somehow change the design of the suspension RBS. But Pe-2, Il-2 and Su-2 mid-1941 aircraft undergo ground testing without such “troubles”.

The above events are not accidental - it was against the background of the events that took place that the SB aircraft was being modernized. Aerodynamic improvements for SB-RK - results of tests of the МNH 2М-105 and СБ-РК 2М-105, which took place in the middle of 1939 and 1940 of the year and the SBB aircraft, which were tested as part of the modifications of the SB. According to the decree KO from 01.06.1940, number 240, the aircraft factory number 22 to 15.08.1940 should build three aircraft SB-RK with improved aerodynamics of the reference sample. They had to show the maximum altitude speed of 490 km / h, and have a safety margin of at least 8.5.

The design and equipment of the standard SB-RK:
- the nose is installed from the aircraft of the ММН "Ф-1", which showed good aerodynamics on tests;
- the reduced (in height) lantern of the cockpit of the arrow-radio operator "turtle" was installed;
- the trim between the 4 and 8 frame was made of Balinit plywood, glued to the wooden parts of the 5,6,7 frame with VIM glue;
- set the sub-frame of the improved design;
- Motors have improved hoods;
- ribbed-tubular type water radiators were used in the construction of the aircraft;
- a new oil supply system is installed - one water-oil and one air-oil radiators, for each motor;
- upgraded oil benzo tanks, installed tanks have a capacity of each 330 liters;
- set screws (D = 3м) with a variable step VISH-22Е;
- for aiming at bombing without picking, the sights of NKPB-3 and OPB-1М were installed;
- for making bombs on the target during a pickup, set PBP-1, artificial horizon and overload indicator;
- install brake grids under the planes on the hydraulic control;
- automatic machine for getting out of a dive; 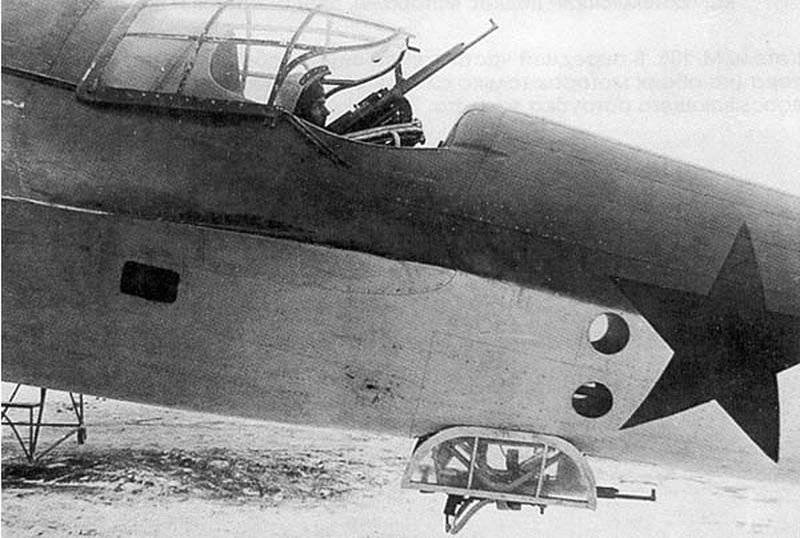 The first tests of the SB-RK reference sample begin in the fall of the year 1940. After a dozen flights revealed the main defects:
- the temperature of water and oil in flight did not fall below 95 degrees;
- longitudinal stability was insufficient.
The aircraft continued to install improved samples of equipment and components. State tests end at the beginning of 1941. Reference sample SB-RK order number 704 from 09.12. The 1940 of the year is renamed the AP-2. The results of state tests:
- AP-2 - weight 6.6 tone;
- High-altitude ceiling 10 kilometers;
- range when arming 2-mi FAB-250 at an altitude of 5 kilometers and speed 390 km / h - a thousand kilometers;
- climb 5 kilometers - just over 7 minutes;
- The maximum speed reached at an altitude of 4.7 km - 475 km / h;
- runway run - 340 meters.

The longitudinal instability was solved by “re-centering” - the factory 30.5-32.7 percent MAR was required to be replaced by 27.25 percent MAR. In addition, tests have shown that it is quite possible to continue the flight with the 1-m throttle. Indicators of dives conducted at state tests:
- number of dives conducted - 25;
- dive angles - 40 75 degrees;
- speed before diving - up to 300 km / h;
- typed altitude before diving - 4 kilometers;
- exit speed from a dive - 550 km / h;
- average overload - 4.5.
- the time of the straight-line segment, on which the precision bombing of -9 seconds is provided.

The main drawbacks of the aircraft are the drawbacks of creating the rotor wing group. On tests because of the destruction of the motor systems, they often failed, the cooling system had small limit values, and it became problematic to operate the machines in winter. Radiators were made without the normal possibility of draining water. The question of overheating of oil and water remained unresolved. It should be noted that in the future, the design bureau of A.Arkhangelsky did bring the rotary-wing group on the AP-2 to the mind.


February 1941 of the year. At the state tests en-2 comes under the number 1 / 511. Changes made to this aircraft:
- motors bring forward on 15 centimeters to ensure longitudinal stability;
- set screws VIT1Т-22Е (D = 3.1 m);
- exhaust pipes and brake grids are made thinner;
- improved overall manufacturing quality of the aircraft.
Ultimately, this led to an increase in the speed of the aircraft: at an altitude of 5, it showed 512 km / h. But the creation of this aircraft was not a priority, other aircraft undergoing testing and development, were held under a kind of slogan "increase in speed." As a result, bombers with increased speed characteristics could not be fully used for their intended purpose - the payload was at least halved.

At the beginning of the 2MB, the Red Army had about 160-165 Ar-2 2M-105 aircraft. Due to poor organization of interaction aviation and ground forces, poor training of command and flight personnel, the “pursuit of victory”, the lack of tactics for the use of bombers, the capabilities of Ar-2 aircraft were not fully used. And the lack of fighter cover tactics led to the fact that by the end of 1941 most of the Ar-2 was lost.

In 1941, the production of the AR-2 was discontinued in favor of the mass production of the Pe-2 bomber. And although many experts and aviation leaders and fleet considered the Ar-2 as the main dive-type bomber, and the Pe-2 as the fighter of its long-range escort, everything happened, on the contrary, with the subsequent stoppage of the production of Ar-2. In total, from 1939 to 1941, about 200 dive bombers of Arkhangelsk were built. 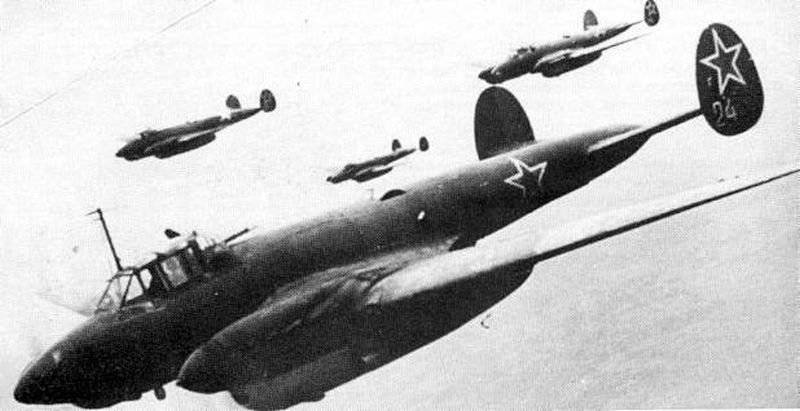