April 14 2018
27
The theory, which speaks of the inevitability of the post-revolutionary “night of long knives” or “37 of the year”, that is, internecine strife among the victorious revolutionaries, which was not recognized in Ukraine for so long, allegedly not related to the “hydraulic” Maidan revolution, yet their rights to Bandera post-Ukraine. 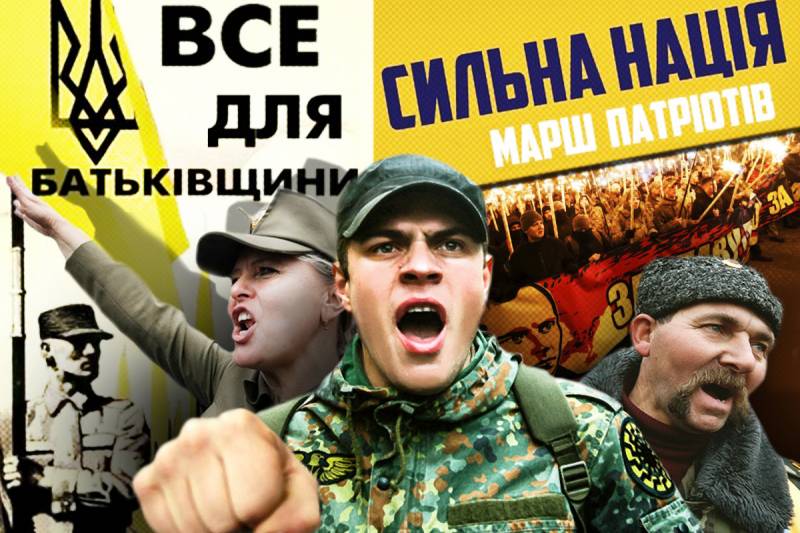 When Vladimir Ruban was arrested for smuggling under the supervision of the SBU weapons from the DNI, many still doubted it. When they removed parliamentary immunity and arrested the hero of Ukraine Nadia Savchenko, the Ukrainian Joan of Arc, for “talking about a coup in the kitchen”, many were perplexed, but after a spitch on Facebook Yuri Biryukov, this “golden nightingale” Poroshenko, doubts were scattered. In Ukraine, comes the "night of long knives."

Yuri Biryukov, advisor to the main beneficiary of Maidan Petro Poroshenko, composed the other day, and introduces a new term into political circulation with the help of his gunpowder, “zradophiles”, that is, “harm the amateurs”. To designate all the people he hated, to whom the SBU’s hand has not reached: “There is a huge crowd of idiots in the country, which Poroshenko’s government blames for all misfortunes,” Biryukov indignant, “they don’t see that Russia is to blame for everything. We call these people Zradophiles. Is it time to say the obvious? They are enemies! ”

Political analyst Yuri Nebozhenko expressed the opinion that this marked the beginning, soon “all Poroshenko’s critics will be declared“ enemies of the people. ” Indeed, all the signs of this are evident. The first "enemies of the people" have already been caught, planted and declared terrorists. Vladimir Ruban, head of the Center for the Exchange of Prisoners, and MP Nadia Savchenko, has begun a promising one.

Given that they are imputed to a coup d'état with the execution of the Verkhovna Rada, there must be numerous accomplices among these "enemies of the people", and Biryukov loyally tells where to get them. And other Poroshenko loyalists are already preparing to take them.

Yuriy Lutsenko, who does not hesitate to call himself a political prosecutor, suspects that the ex-prime minister and head of the Ukrainian Choice Viktor Medvedchuk was the think tank of the “Ruban-Savchenko plot”. It does not matter that Medvedchuk and Ruban never worked together, except that they met to exchange prisoners, it’s important that the plot of “Ruban - Savchenko” should have a “brain center”.

Lutsenko does not stop at that, and he hints at the possible political leader of the conspiracy — Yulia Tymoshenko herself, who has a higher rating today than Poroshenko himself. And on the horizon, in the camp of the "enemies of the people", Poroshenko's old enemy, Igor Kolomoisky, was already guilty of the fact that he well knows both Ruban and Tymoshenko. And although Kolomoisky is in his board “Zhanobanderovets,” than he is better than other revolutionaries, also in the board of former “friends”? Yes, Lutsenko’s work is provided for years ahead, if he is not suddenly suspected of anything, at night, because all cats are sulfur.

There are other candidates either for conspirators, or for punitive conspiracy: numerous military and paramilitary Nazi parties, Nazi battalions, and Nazi brigades. The Azov regiment was officially recognized by congressmen of the United States as a Nazi formation, but this is not embarrassed by neither democratic, nor liberal, nor pacifist humanistic organizations in the world, and even in Russia, in their support for the “reforms” in Ukraine.

The leader of Azov, Andrei Biletsky, together with other national organizations, openly proclaimed: "The nationalists are beginning a crusade against the authorities." But Poroshenko’s power for some reason does not react to this, as it does to Nadia Savchenko. Paradox! The government has so far limited itself only to a search at the Azov training base in Kiev at the Arsenal plant captured by the militants.

According to political analyst Andrei Zolotarev, the nation-forces are supported by the government itself, its various offices, so that in the next elections it can be used to drive any opposition “under the table”. However, the Nazis can break out of the "content" if favorable conditions are created for this. And let us add that the Nazi formations can break up and enter into civil strife among themselves, as it always happened on other “nights of long nights”, what makes the “Ukrainian night” worse?

This is the most likely scenario for further developments in Ukraine, yes, purely theoretically. But the post-revolutionary “night” theory turns out to be fully applicable to Bandera’s Ukraine, as indicated by the arrests of Vladimir Ruban and Nadya Savchenko.