Cosmonautics Day. Bright technological victory of the USSR and all mankind

April 12 2018
76
Today in Russia (and not only in Russia) Cosmonautics Day is celebrated - 57-th anniversary of the first manned space flight. The famous Gagarin "Let's go! .." became a symbol of space exploration, which continues to this day and offers new and new challenges to humanity. The very first flight of a person into near-Earth space is a true technological victory for the entire civilization, and the USSR played the flagship role here. 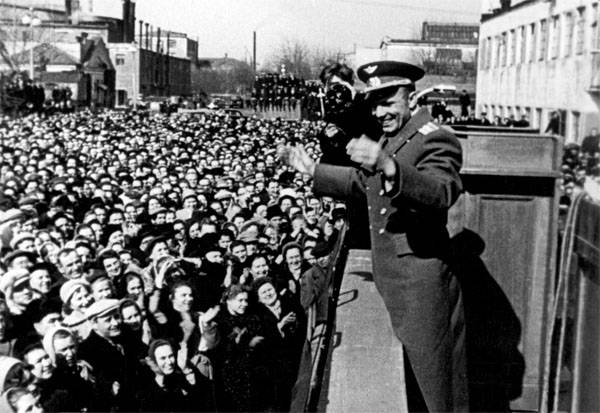 TASS gives the statement of the first and only Polish cosmonaut Miroslav Hermaszewski (he flew into space in the 1978 year):
After 12 April, when Yuri Gagarin flew into space, the first impression was shock. Everyone thought about how it is possible that a person found himself in a space where no one else was. Euphoria has swept the whole world. After the first shock, everyone began to think about what it was, the first assessments appeared, reflected in culture and science. The Soviet Union exulted for the second time after the launch of the first satellite in 1957. It was a good victory for civilization.

The anniversary of the first manned space flight is celebrated on “St. George's Night” in almost fifty countries of the world, including Britain, the USA, Ireland, Finland, Canada, Japan, India, etc. About 20 thousand people take part in the events.

Roscosmos:
On most of the territory of our country, the 12 day of April 1961 of the year turned out to be really spring. The sun shone in a cloudless, bright blue sky. A solemn, with undisguised glee, the voice of the announcer Yuri Levitan sounded from modest home speakers, thundered from factory loudspeakers, flew over the streets from receivers placed on the windowsills of the open windows. The streets of the cities were immediately filled with people, they embraced and congratulated each other. Many later recalled that it looked like Victory Day in 1945. The whole country, the whole world was celebrating the victory of man over earthly attraction. And there was an understanding that this accomplishment of the Soviet cosmonautics does not belong to one country, it really is the victory of the whole world. From the very flight of Gagarin, the space theme became the main one in the press - messages on every flight hit the front pages of newspapers. With them began all the television programs. Gagarin was the first, and other heroes followed him into space. Today, mankind continues to open more and more new space doors - long manned flights, deep space research, construction of space stations. Mankind continues to dream of space and confidently follows the path that Yuri Gagarin 12 of April 1961 laid for him.


By the Day of Cosmonautics, the Ministry of Defense of Russia presents a unique project: declassified archival documents from the funds of the Central Department of the Defense Ministry, telling about the officer service of the first cosmonaut of the planet Earth. Link.

We wish success to modern space explorers and developers of spacecraft and programs in their frankly difficult work.