Crimean scenario of the rout of Russia

April 12 2018
371
Russia is threatened by the Crimean (East) scenario of the sample 1854-1856. As in the middle of the XIX century, Russia got into the conflict in the Middle East. Overestimated her strength and found herself in international isolation. The masters of the West formed a powerful coalition: the USA, England, France. The Western coalition is supported by the Arab monarchies, which B. Assad also stands across his throat. And our Turkish "friend" Erdogan threatens Damascus. Moreover, Turkey clearly supports the criminal regime in Kiev on the issue of Donbass and the ownership of the Crimea. Erdogan is following the path of creating a Turkish “caliphate” with the ideology of Pan-Turkism, Pan-Islamism and the new Ottomanism. The fundamental contradictions of Russia-Russia and Turkey have not gone away: this is the Syrian issue, the issue of the straits of Constantinople, the Armenian issue, the Crimean issue, and the question of domination in the Black Sea basin. Turkey claims dominance in the Turkic and Muslim regions of Russia. At the same time, Erdogan practically does not forget to develop our resources in the development of the Turkish nuclear program, supplying the Turkish market with Russian gas, penetration of Turkish goods to our market, etc. 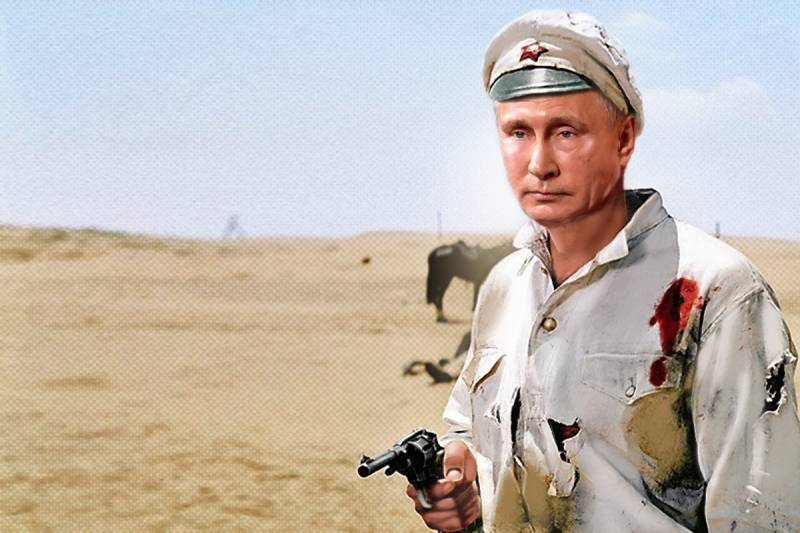 We have no friends and allies. Serbia is defeated, Belgrade has embarked on integration into the European Union and NATO. Syria is defeated and dismembered. Her lands are trampled by invaders, including our Turkish "partners." Assad, even the Damascus region does not control everything, it is held only with the help of Iranian and Russian bayonets. Iran itself is under attack. In addition, Moscow’s previous policy, which had flirted with Western “friends” for a very long time, pushed Tehran, which used to need our support and common development programs. That is, Moscow and Tehran are only tactical allies (in some matters). In Syria, we support Assad, but here we have different interests. So, Iran is an enemy of Israel, and Jewish aviation regularly strikes at positions and warehouses of Iranian units. And for liberal Moscow, Jerusalem is a friend. In addition, Moscow and Tehran have different views on the problem of sharing and developing the resources of the Caspian.

They like to call China our “strategic ally”. But it is not. China was our ally and friend when we had our own development project, and Russia was a superpower (under Stalin). Then we were the “big brother” for the Chinese. Now the situation has changed: China has become an economic superpower. High technology in the field of space and military Beijing from the post-Soviet space deflated. China is interested in the European market and is creating the “New Silk Road”. China has captured powerful financial and economic positions in Southeast Asia, Africa and Latin America. A military expansion has begun, too cautious, but this is the case. Beijing has certain contacts with the ruling houses of England, the Windsor dynasty and the Rothschilds. Chinese dragons, with the support of part of the global elite, create their own world order, their world currency - the golden yuan. In such a scenario, Russia is just a “pipe”, a raw material appendage supplying energy resources, timber, metals, agricultural products, etc. In the long term, with the further degradation of the country and the extinction of the Russian people, China will simply take the land to the Urals. Chinese tourists are already eyeing the land of the "new China" - Baikal, huge rivers, forests, lands of Siberia, not poisoned, as in China itself.

Obviously, the recent informational blows to Moscow (the “Skrypal case”, chemical attack in Syria), increased economic pressure and military psychosis, with the preparation of an attack on Damascus, all this is a continuation of the fourth world warwhich began in 2013 year. The Western masters are reloading the matrix, continuing to build a new world order, a global non-slave civilization. The attack of Damascus is almost inevitable. The main goal is to draw Iran and Israel into a big war. Expansion of war, the zone of inferno. The US masters are still trying to destabilize Eurasia, turn it into a battlefield. To gain time for the US leap into the future, while the resources and strengths of other players will burn in the war.

Moscow can accept two losing scenarios if it continues to operate within the framework of the game of the West. Both scenarios suit Washington. First, sit in the bases and close your eyes to the beating of Damascus. With the inevitable activation of the opponents of the Assad regime. As a result, Assad overthrown. Russia will lose its legitimate reason for staying in Syria. We'll have to leave. Syria is finally divided into spheres of influence by the winners. The next will be Iran, with the connection of Israel and its project "The Great Israel" - "New Jerusalem".

Secondly, to resist, trying to save the power of B. Assad. However, given the isolation of the theater of warfare from Russia and the complete superiority of the enemy in forces and means, defeat is inevitable. The Russian air group in Syria, air defense elements, individual ships will not be able to stop a massive strike by the US and its allies. Moscow can not quickly strengthen the grouping in Syria, as Turkey easily closes the straits as a member of NATO. Tales of nuclear missile power can be forgotten. In a local conflict, Moscow will not deliver nuclear strikes on London, Paris, Washington, Ankara and Riyadh. This is the way to suicide. In addition, the Western liberals who dominate our power elite simply cannot psychologically fight the West and the world community. All their capital, property, as well as wives, children - there. West for them is "Mecca and Medina", the promised land.

A local military defeat, given the increased sanctions, further financial and economic pressure, will lead to the collapse of the Russian economy "pipe". It will be like a defeat in the Crimean War or Tsushima-2 (defeat from Japan in 1904-1905) with the activation of all the negative trends that have accumulated over three decades. In addition, Western intelligence services and the “fifth column” may well organize several man-made disasters, accidents, fires and local riots (for example, based on environmental protests) in Russia itself. Then a palace coup is possible with the coming to power of new “febras” (Westerners) (Kudrin, Shuvalov, Sobchak) already with full authority. Then there will be an attempt to “normalize relations” with the West, in essence, surrender. Delivery of Donbass, Crimea, contribution to Kiev. Further more. Trump is already proposing to disarm. However, only Russia will disarm, Washington will only make promises that will easily break.

First, you can admit defeat and leave Syria. All the same, to defeat the gangs failed. Syria is already dismembered and partially occupied by external players. The idea of ​​the "Turkish Stream" in its original form failed. Moscow has already done this three times. We talked about the "victory" and the withdrawal of troops. True, partly and soon restored the group, even strengthened. Focus on internal issues. World distemper one way or another will continue. It is necessary to concentrate on the tasks of preserving the territory, population and culture (Russian, Russian).

After defeat in the Crimean (Eastern) War, Petersburg did just that. The Chancellor and Foreign Minister Alexander Gorchakov said: “Russia is reproached for being isolated and silent in the face of such facts that are not in harmony with either law or justice. They say that Russia is angry. Russia is not angry; Russia is concentrating. ”

Second, the we can recognize Damascus as a strategic ally, Syria as an allied state. Claim that strikes on Damascus will be considered as strikes in Russia. With all the consequences. To demand the withdrawal of all troops of the interventionists, from the territory of Syria - Turkish, American. Start a real restoration of the union state. Failure to withdraw the occupation forces, for example, Turkey, will lead to the rupture of all contacts - diplomatic and economic. Moscow can raise the issue of the status of the straits and Constantinople, the restoration of Armenia (the return of Western Armenia, which is part of Turkey), the creation of a Kurdish state, etc. Russia's tough position will force the collective West to retreat. So in the past they saved Cuba.

The second way is fraught with tough confrontation with the West with simultaneous tough mobilization, refusal to link the ruble to the petrodollar system, new industrialization, and oprichnina to eliminate the liberalism-westernism virus (Russia in the ring of enemies, the country is a military camp). Actually this is the traditional way for Russia-Russia. She lived like that for centuries. It is necessary to admit directly that we are a separate, original civilization. We have our own development path, that we are abandoning Western capitalism, consumer society and self-destruction. Our ideal is the "kingdom of truth."

There will be no big war. The nuclear missile arsenal of Russia will not allow the US and NATO to attack the country. The West is ready to intervene in Russia, but only in the conditions of a new unrest, disintegration and collapse, Westerners came to power, who will "negotiate", surrendering one position after another. In the conditions of mobilization, cleansing the country from westernism, the “fifth column”, the country - “military camp”, the West will not be able to fight. The masters of the West are not ready for a real war. They are not suicides. Western predators are ready to kill and sneer at the victim. The Western world is currently not capable of fighting how the Russians and the Germans fought during the Great War. But the hybrid, informational, and economic war will continue, as will attempts to trigger new local and regional conflicts.

In foreign policy, the main task is to oust the United States and NATO from Little Russia (Ukraine), restore the unity of Great and Little Russia, the Russian people. Denacification of Ukraine, trial of war criminals and thieves-oligarchs. Return the property and capital to public ownership. In Russia itself, nationalize large-scale industry, recognize criminal privatization and revise its outcome.

Ctrl Enter
Noticed oshЫbku Highlight text and press. Ctrl + Enter
We are
Russia declared warResults of the week. “If I am leaning against a warm wall in a quiet place, then I’m still nothing at all!”
Military Reviewin Yandex News
Military Reviewin Google News
371 comment
Information
Dear reader, to leave comments on the publication, you must sign in.