T-90C in Iraq: a double feeling from the deal 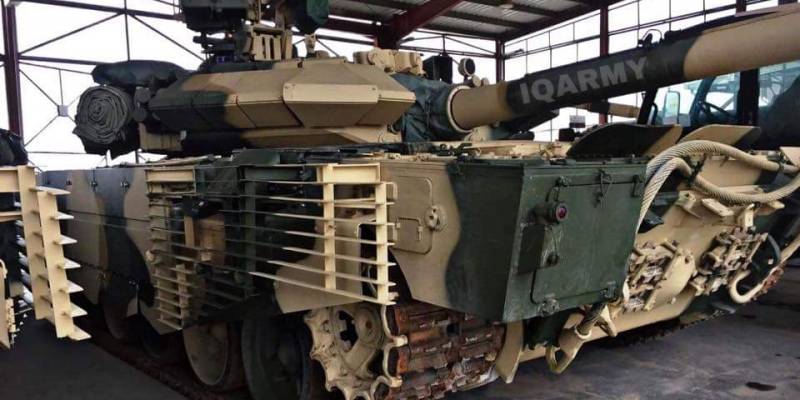 Long ago, back in 2016, information about a contract between Uralvagonzavod Research and Production Corporation JSC and the Government of Iraq passed in journalistic circles.

It is clear that Baghdad was interested and agreed clearly not on railway cars.

Uralvagonzavod produces much more interesting products for Iraq - Tanks. However, it is no secret to anyone that today the Iraqi government is completely dependent on overseas owners and cannot conduct an independent policy.

It was all the more surprising to see in the annual report of Uralvagonzavod for 2016 a year the beginning of work on the implementation of the contract with the customer "368" as priority tasks. Under this code is Iraq. And the contract dealt with the delivery of the first batch of Russian T-90C / CK tanks in the amount of 73 units.

There were many disputes then. How can it be? Iraq armed with American "Abrams" to the eyeballs. He pays huge money for the maintenance of his tank park to American corporations. The United States will not allow its own defense industry to be forced out of the Iraqi market. Agree, there is a reason for such reasoning. Even the resonance ...

Doubts dissipated in November 2017, after a TASS report. According to this report, at a press conference of the Federal Service for Military-Technical Cooperation, it was announced that Russia had begun to implement the contract. T-90C are delivered according to the schedule. 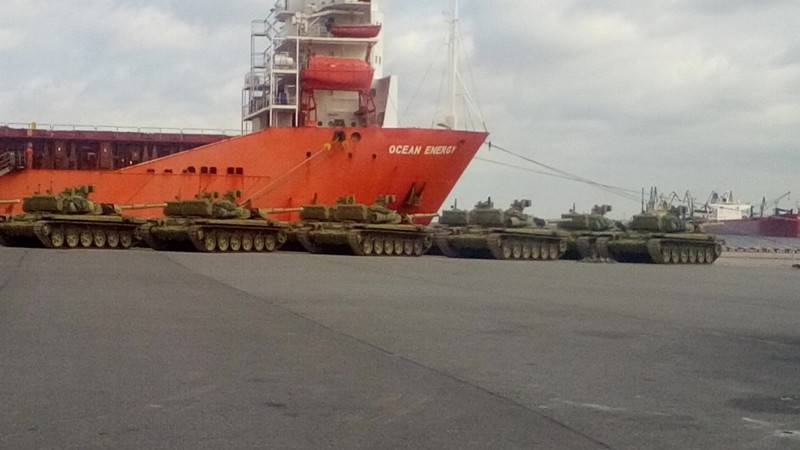 The arrival of tanks was also announced by the Russian ambassador to Iraq, Maxim Maximov, in his statement of February 8 from 2018. True, Maximov did not mention the specific date. But in the network a little earlier, in early February, there was a video of loading T-90С onto a ship in the port of Ust-Luga. And they were painted in sand colors.

And here's a continuation stories. More precisely, the beginning of the end of this story. 9 April photos of Russian T-90С appeared in the network in Iraq. Huge, even spacious hangar. Smooth rows of brand new tanks and Iraqi soldiers and officers on their background. 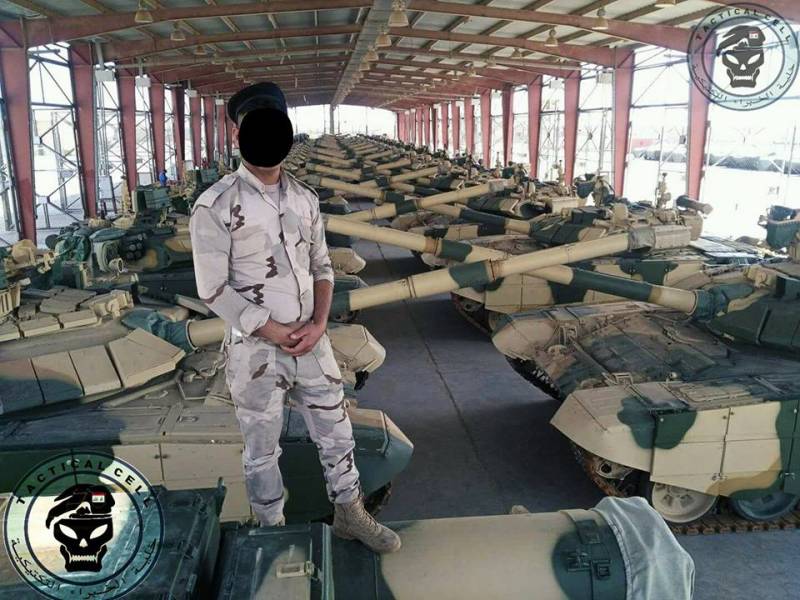 To judge the number of tanks is difficult. But some "frills" you can see. The most noticeable is the side screens. Those that have been successfully tested in Syria on T-72B3. But the second is even more interesting. The tanks installed additional power units. 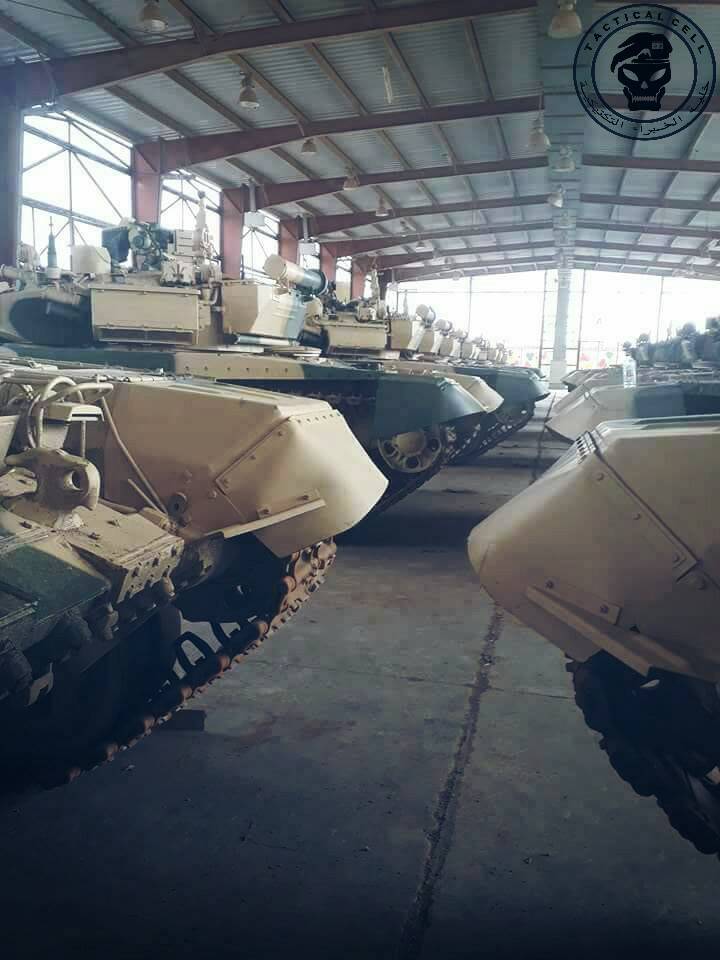 Such an energy unit, as shown by the American experience of the Abrams, allows the use of equipment and weapons of the tank with the engine off. That in the conditions of heat and sand is useful for engine resource. Moreover, the tank can continue firing even if a rocket hits the engine.

The Arab press today writes quite a lot about new Iraqi tanks. They call huge numbers both in the number of cars and in their value. In this polyphony should be reduced rather than increased. So, according to the Middle East Monitor, in April Iraq will receive the X-NUMX of the T-73C. Actually, as indicated in the contract.

What is it? The victory of Russian weapons over the US? Successful work of our sellers weapons? Reorienting Iraq? Or simply the ability to count their own money and the choice of the best from the category that you can buy for this money?

Moreover, there are many photos of the old Iraqi "Abrams" in the network, covering themselves with dust on the basis of the 9 armored division in Taji. Only these tanks have long been outdated. Moreover, they were obsolete at the time of sale. Even then, the M1А1 did not meet modern requirements. And the Americans did not intend to sell advanced М1А2.

However, at that time, these tanks really played a role in the war. Recall, Iraq spent 2,16 a billion dollars on an 152 tank. But why was this done? Yes, simply because it was necessary to fight something with the "IG" (prohibited in Russia). It was a powerful military force.

According to a recent publication of the Iraqi newspaper Al Ghad Press, 60 Abrams tanks of the Iraqi army, which now need to be rebuilt, were put out of action during the fighting against the forces of IG * in Mosul (it is unclear whether this number is irretrievably lost tanks) .

The repair of Abrams tanks of the Iraqi army was carried out by General Dynamics Corporation on a technical base in Al Matan at Baghdad airport, where, apparently, the remaining tanks of this type are also located.

Probably, the cost of repairing and upgrading the not-so-new American tank exceeded all reasonable limits and in Iraq seriously thought about another combat vehicle. Cheaper and (preferably) new.

So what is the advantage today of our T-90С over American М1А2? There are many such comparisons in the press today. Compare everything. Therefore, we can do without technical details, millimeters and kilometers. As well as without the "final proof of the superiority" of any of the tanks.

Armor? The American armor is more powerful, with a grid of depleted uranium. A complex of active protection is in both tanks. Dynamic armor? Again, there is. Practically, if again not to go deep into the performance characteristics, the tanks use similar protection systems.

Reinforced armor makes the Abrams somewhat awkward. For the vitality it was necessary to "pay obesity." Run fast "fat man" can not. 63 more than a ton of weight. Do not compare with 46,5 tons of T-90C.

There is, however, one detail that still makes the Abrams preferable. The tank has been fighting for quite some time. This means that a lot of shortcomings have been identified and fixed. Our T-90 is only at the beginning.

But our tank has an advantage that makes it better in the eyes of a potential buyer. Price! "Abrams" bites. More 8 million apiece. Ours are much cheaper.

So why did Iraq buy our tanks today? Alas, the answer is simple. You need a lot of good tanks, and you don’t have enough money to buy them. But other thoughts are spinning in my head. Are the Iraqi authorities so dependent on Washington? Or, being fascinated by Syria, the United States decided to "loosen the leash" around Baghdad's neck?

In any case, the supply of our tanks to countries that were previously fully armed with NATO or the US is a good sign. For our MIC.
If we take for the postulate that export tanks are much worse than those that go into our army ...

Otherwise, this is just a good base for testing our tanks by experts of “potential”, thoughtful study and development of new methods of combat.

Ctrl Enter
Noticed oshЫbku Highlight text and press. Ctrl + Enter
We are
The main tank T-90. International market leaderReports from the militia of New Russia for 27-28 September 2014 of the year
Military Reviewin Yandex News
Military Reviewin Google News
96 comments
Information
Dear reader, to leave comments on the publication, you must sign in.