April 12 2018
15
The participation of Russians, or rather volunteers of the Russian Empire, in the Anglo-Boer War on the side of the Boer troops, of course, is worthy of special mention. Already, the road to distant South Africa was itself dangerous and extremely costly. Volunteers traveled to Transvaal and the Orange State in three ways: via Hamburg, Marseille and Suez in Lourenço-Marques (now Maputo in Mozambique), immediately from Marseilles on the ships of the Imperial shipping and the last route - again from Hamburg on cargo ships with Amsterdam, Le Havre, Bordeaux, etc. Thus, the cheapest way was costing 125 rubles. For example - for this money in Russia it was possible to acquire a good horse, and there will still be money for the cow.


The high cost of travel, of course, affected the number of volunteers. Many recent students, young officers and others enthusiastic about the idea of ​​building a new free republic simply could not afford to pay the fare. Especially since, unlike the Europeans, the Russians entered the Boer troops without any thought of profit, this is not counting their hard-earned money, which they lay out for the opportunity to lay down their heads in the other hemisphere. They joined the ranks of volunteers and women - Sofia Izedinova, who served as a sister of mercy in the Russian-Dutch sanitary squad, and Olga von Baumgarten, also a nurse, became especially famous for her memoirs.

According to the memoirs of Vasily Romeiko-Gurko, who was not actually a volunteer, but was a military agent of Russia, volunteers in general could be divided into two categories. The first was people inspired by the struggle of the Boers against the oppression of the swollen British Empire, they were idealists, but they could well expect to earn the aura of a hero, a military officer, and even advance in service. But the second category of their "exploits" was sometimes hated by the Boers themselves no less than the British. It included the totally uneducated money seekers, who were recruited for money by various European committees of assistance to the Boers. These guys were often not going to work out money on the battlefield at all, but they simply wanted to make a voyage to Africa for darma, and then stay in the gold mines. Good or bad, but among our compatriots there were no such cunning.

It is worth noting that one of the motives for which domestic fighters pulled into distant South Africa was the desire to recall the British Crimean War. How warmly they treated the pompous red uniforms after those events - to remind once again does not make sense. 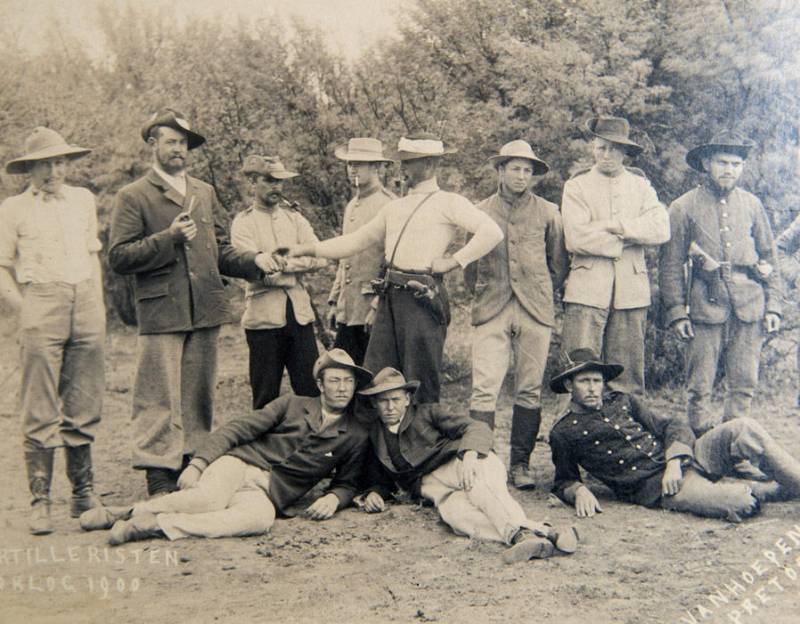 Also very interesting are the peculiar travel notes of our volunteers who have traveled almost half of Europe on their way to South Africa. Thus, one of the outstanding fighters of the Boer Army, Eugene Augustus, wrote about his presence in the "capital" of present-day Europe Brussels, which was very unflattering and even outraged. First, Eugene did not expect such a number of taverns on every street. Secondly, he was struck by how the good-looking public on Sunday morning turned into a noisy, shrill crowd of drunks in the evening. And certainly the young second lieutenant didn’t expect to see decently dressed gentlemen slowly crawling along a lamppost onto the pavement in every “hundred steps” in “civilized” Europe.

Despite universal moral support of the Boer struggle, because In the Old World, Britain managed to get almost all of them with its imperial fanapps, our volunteers quickly realized that in reality these “fans” could hardly be counted on. Moreover, the overwhelming majority of Russian fighters are confronted with such bureaucracy that local bureaucrats seemed like angels of heaven. For example, in Lourenço-Marques, who then belonged to Portugal, the sons of the portland’s homeland demanded a profit for each piece of paper, each signature, to eventually cross the border with Transvaal. The Dutch and French consuls, who in theory were considered friendly, showed no less “concern”. This was partly due to the fact that the whole of South Africa was flooded with British spies, and partly because Europeans did not want to insert a pair of clips into Queen Victoria’s plump butt, nobody, especially small bureaucrats, wanted to risk their own well-being.

It came to the point of absurdity - so, when Lieutenant Colonel Romeiko-Gurko opened his chests, the Portuguese customs officers clutched their hearts, seeing the uniform of the Russian officer and his awards. Office rats instantly issued it as a military smuggling and confiscated. After all the troubles, the colonel nevertheless returned the property with an apology. One can only imagine what sticks inserted into the wheels of ordinary volunteers. 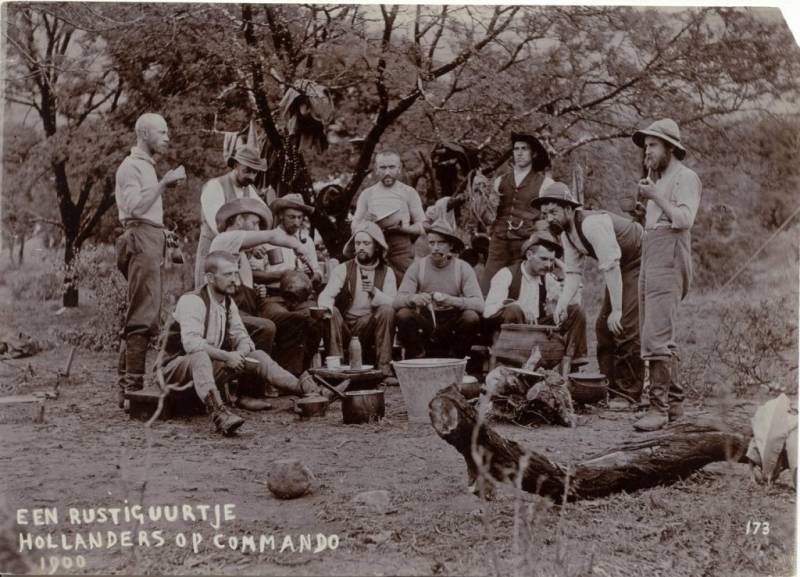 Dutch commando under the command of Evgeny Maximov

Considerable help in overcoming all obstacles and problems to Russian volunteers was provided by Russian Jews, who, oddly enough, turned out to be numerous in South Africa. True, they could not understand why it was so far, but, yearning for Russian, it was completely disinterested (no need to smirk) to help future soldiers find shelter, get food and acquaint them with local realities.

In general, the role of Russian and foreign Jews in that war was extremely ambiguous. On the one hand, such desperately brave fighters as Herman Yudelovich fought for the Boers (they will become Feldkornet, they will courage to win the glory of their squad as the Jewish Commando, will die in the battle of the Orange River) and Sasha Snaiman (whom the Boers called Jan Snaiman). On the other hand, many Jews simply dreamed of earning money, trash at the British as spies, my little gold and doing speculation, sorry, business. But this stuff, because Some Jews, who knew little Russian, presented themselves as volunteers from Russia, gaining various preferences for free, from a free horse to small government contracts.

How far at first the Russians and the Boers, who, despite the idle talk about the stupidity of the farmers, were far from being fools and quickly got to the bottom of the “helpers”, can judge for themselves.

In general, there were plenty of rogues in the Boer War. One case is indicative during the night duty - the fireworks - in the thickets near the banks of the Tugela River, described by Eugene Augustus. On the opposite bank was the British camp. Suddenly, a cavalry detachment began to wade across the river. Naturally, a volley hit. That's just instead of the expected English swearing and strict orders on the surface of the river rushed selected Italian foul language. It turned out the detachment of the notorious captain Ricardi after the next robbery, which the Italians themselves called intelligence and did not inform anyone, returned loaded with various officers' good.

But most of all the Boers themselves and Eugene were surprised by the fact that Ricardi pounced on them with curses not because of the seriously wounded fighter they pulled out of the tumultuous Tugela stream. Ricardi shook his pistol and cursed the “Kaffir offspring”, I mean the Boers, because after the volley one of the horses with the British swag was blown away by the river. Against this background, Russian volunteers, willy-nilly, began to enjoy an excellent reputation simply because they were not inclined to theft, banal stupidity and vanity. 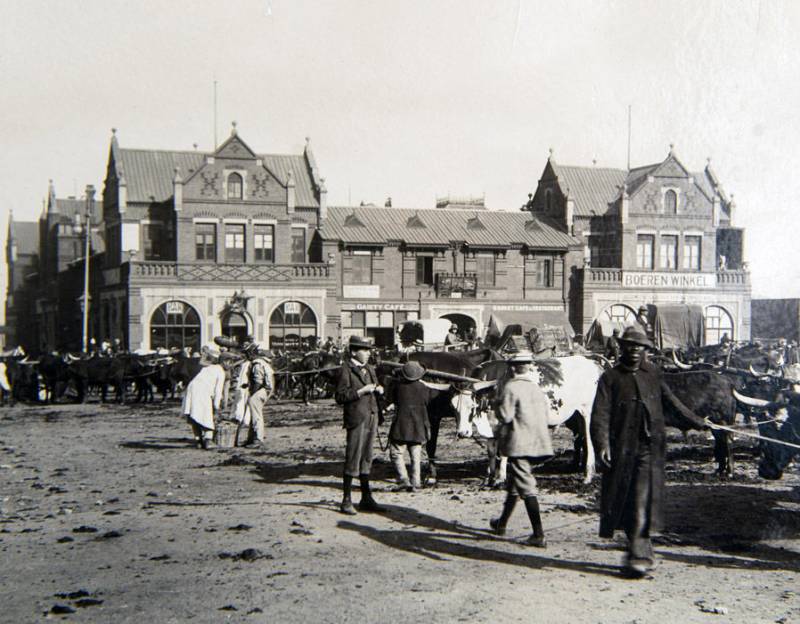 South African cities of the war

At the same time, it was precisely this behavior of the substantial part of European volunteers that brought the Boers and Russians closer together. Contempt for the adherents of various colors is reflected in the memoirs of many of our fighters. Almost all of them recalled how, according to the best hotel rooms in Pretoria (in comparison with the trenches, the “grand hotel” everywhere), all sorts of parasites wandered, allegedly gathering volunteer units. Having managed to become a contentment, this hotel plankton lived at the expense of Transvaal, well, and ate at the expense of the republic.

At the same time, the front-line life of our fighters was not only difficult for traveling conditions and contrasting food (either forced “fasting days” on the same water, or roe deer or lamb skewers), but also purely psychological features of that war. For example, the Boers, after watching Anglo-Saxon superiority in the form of the treatment of prisoners, the burning of entire farms and the widespread execution of hostages, did not shy away from the battle to search around the killed enemies in search of what was needed. And all this took place to the accompaniment of the wild heat, when flies and other unpleasant midges comfortably crawling in wounds torn apart by expansive bullets go as a bonus. For our volunteers with their ideals, breaking the knightly customs of fighting (if they existed at all, and not only in their young heads) was hard. It was no less difficult to interpret the Boers already in the camp, why the Russian Tsar would not send his army in any way, because the Russians love the British no more than the Boers themselves. 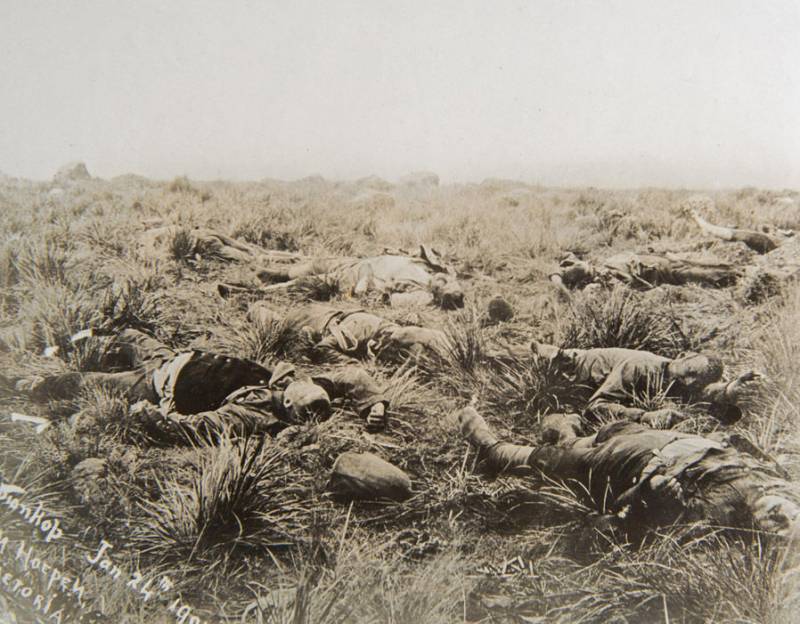 The unbearable heat was hated by the fighters also because the people, horses and livestock killed by regular English shelling in the blink of an eye began to rot and stink. This torture was ubiquitous and never-ending, since English pedantry was constant only in the daily shelling, which took place regardless of the situation at the front. One of our fighters described the days of bitter standing on positions without strength to move into the attack, without the right to retreat, I quote: “In the end, such apathy found us, the idea somehow sluggishly worked, and we wandered for days at a time, just sleepy, reviving only at night, when it was the turn to occupy the fire watch. ” 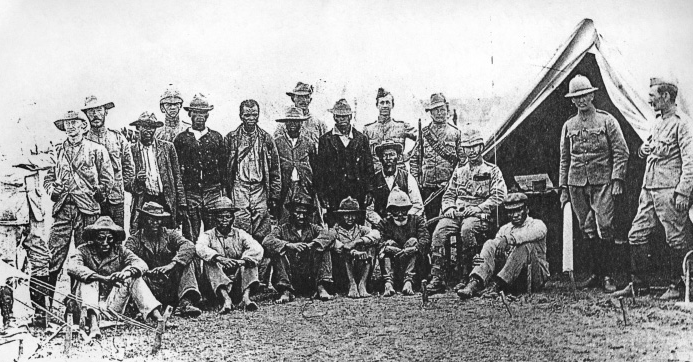 Blacks in the British camp - and workers, and scouts, and messengers

Also, the attitude of the Boers to the black population made a heavy impression on Russians - from condescending and friendly to cruel and even paranoid. But if at first it was attributed to the colonial heritage, cultivated by all - from the Portuguese to the British, and the memory of the Zulu wars and raids, then later our volunteers realized that everything was somewhat more complicated. For example, the British actively used the black population as scouts and even messengers, and the big fan of British imperialism, the magnate and dexterous manipulator Cecil Rhodes, set the Bantu peoples both on the Boer troops and on their settlements. So, the blacks themselves were used to prevent the creation of a modern state, however, in the lands of Africa. Well, just like now.

Ctrl Enter
Noticed oshЫbku Highlight text and press. Ctrl + Enter
We are
Is “Maidan” possible in South Africa? Who and why not like President ZumaMoney for the army is not enough
Military Reviewin Yandex News
Military Reviewin Google News
15 comments
Information
Dear reader, to leave comments on the publication, you must sign in.