April 12 2018
34
The sharp aggravation in the Donbass, occurring despite the current “Easter truce”, is connected with Washington’s attempt to threaten Russia with creating a “second front” in the event of a too sharp reaction to the American strike in Syria. 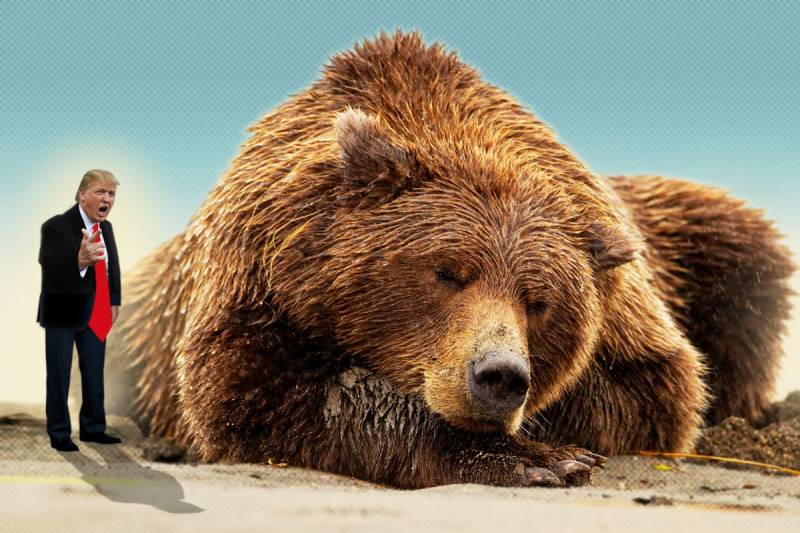 The main objective of the American "retaliation" in Syria is the symbolic slap in Russia.

Donald Trump and his entourage, with their statements about the "chemical attack" in the Duma and threats, including at UN Security Council meetings, as always, deprived themselves of political maneuver and put the situation into a dead end, from which it would be extremely difficult to get out without losing face.

The position of the Americans is aggravated by the fact that Russia, through the mouth of its military and diplomatic representatives, unequivocally warned the United States that their aggressive actions would cause an immediate and extremely painful response.

Especially humiliating for the United States is that neither the president of Russia nor the head of government has descended into a controversy with Trump: the warnings are voiced by the Chief of the General Staff of the Russian Armed Forces and the permanent representative to the UN

At the same time, it is obvious that the Americans are not ready and do not want to really fight with Russia. But Trump cannot retreat either. Especially after the obvious weakness that the American leader showed in the situation of the Korean crisis. Waving a baton in front of Kim Jin Un’s nose and seeing that he was not scared, the American leader hid her behind his back (taking aircraft carrier groups away) and left with nothing.

The American leadership saw in the words of General Gerasimov a certain loophole and an opportunity to make a symbolic "retribution" without war with Russia, that Russia would respond if there was a threat to its citizens. From which the Americans concluded that if their attacks were not struck by the Russians, the Russian Armed Forces would not retaliate against the "carriers," that is, American aircraft and ships from which the missiles would be fired.

An indirect confirmation of this approach is the message published by the 11 of April in the Los Angeles Times.

“The Pentagon’s planning teams are ready to respond to the alleged chemical attack in Syria, but one danger is of particular concern - if the Russian military perish on Syrian territory, which will cause the regional war to develop into a confrontation between Washington and Moscow,” - worried edition.

It also reported that the Pentagon requires Trump to target “the Bashar Assad factories producing chlorine and other toxic agents,” that is, enterprises for the production of agricultural fertilizers and household chemicals. That is, in those places where the Russian military just will not.

“Russia promises to shoot down all the missiles fired on Syria. Get ready, Russia, because they will arrive - excellent, new and smart. You should not be a partner of an animal that enjoys killing people with gas, ”he wrote on Twitter. That is, the Americans launch rockets, and the Russians are trying to shoot them down without firing at ships and airplanes.

However, there is no certainty that Moscow will agree with this format. And in order to “convince” our country to accept it, the Americans took a number of steps. One of these is a package of recent sanctions, coupled with the unequivocal threat that they can be further strengthened.

Another "argument" was the aggravation in the Donbas, caused by the intensification of the "usual" aggressive actions of the Kiev formations.

So, for the first time in quite a long time, the Armed Forces of Ukraine inflicted a massive artillery strike on the residential quarter of Donetsk. As a result of the shelling of the outskirts of Donetsk, seven civilians were injured and 37 houses were damaged. In addition, gas pipelines were disabled in the Kuibyshev and Kirov districts of the capital of the DPR.

In total, according to the STSKK, almost 600 ammunition, including 152 caliber mm shells, was fired over the territory of the DPR within 24 hours.

Now, the blow is quite aimed precisely at residential areas and at urban infrastructure.

And take it anyway as a demonstration is impossible. The current shelling of civilian objects has no military significance and, obviously, is not the beginning of an offensive operation.

Recall that the barbaric shelling of Donbass agglomerations, aimed at "squeezing" the population of LDNR into Russia, was reduced after unequivocal warnings from Moscow.

This is a warning to Moscow: if it rejects the format of symbolic “retaliation” proposed by Trump, then a blow will be struck at the people's republics, to which our country will have to react and be drawn into hostilities in the Donbas. Which, of course, would be highly undesirable.

Moreover, it’s not just the participation of Russian troops in this conflict, but even pressure on Kiev can be a very negative reaction from the EU.

The combat capabilities of the Ukrainian Armed Forces are not too great, but hopes to extract maximum benefits from the anti-Russian hysteria sweeping the West, and even under the "guarantees" of Washington, such as those that Saakashvili had once given, could play a cruel joke with Kiev.

As for us, it is obvious that in the current situation we need to expect strikes in all directions.

Ctrl Enter
Noticed oshЫbku Highlight text and press. Ctrl + Enter
We are
Situational analysis of the death of the MH17 flight (Malaysian Boeing 777), made on the basis of engineering analysis from 15.08.2014Results of the week. “In our cooperative, the board is always agreed”
Military Reviewin Yandex News
Military Reviewin Google News
34 comments
Information
Dear reader, to leave comments on the publication, you must sign in.