"Yes, swaddle him already, let him calm down." On the reaction of Americans to the trump tweet

April 11 2018
90
Maria Zakharova, the official representative of the Russian Foreign Ministry, commented on the tweet of the US President, who called on Russia to “prepare” for the arrival of “good and smart” missiles in Syria. The response to this statement of Trump, Maria Zakharova, also published on the social network - on Facebook, stressing that it would be better for Trump to call on “not to prepare” Russia, but the terrorists.


From the note of the official representative of the Ministry of Foreign Affairs of the Russian Federation:
Media: “US President Donald Trump said that Russia should be ready to shoot down missiles fired at Syria. About this he wrote on Wednesday on his Twitter page. "Russia promises to shoot down all the missiles fired at Syria. Get ready, Russia, because they will fly in - good, new and smart," he wrote.

Smart missiles must fly toward the terrorists, rather than the legitimate government, which has been fighting international terrorism on its territory for several years.

By the way. Did the OPCW inspectors warn that smart missiles would destroy all evidence of the use of chemical weapons on the ground? Or is the whole idea composed to quickly cover up the traces of provocation with strikes of smart missiles, and international inspectors would have nothing to look for as evidence?

Meanwhile, the comments of the Americans themselves to Trump's post about actual threats against Syria and Russia are attracting attention.

Here are a few comments to Tweet US President:

Can anyone already swaddle him in a diaper and spank him until he calms down?

What the...? This is definitely not a way to govern the country.

When you say "the animal kills with gas," you mean John Bolton, right?

And what else do you want. All of our (American, - approx. "IN") liberals demand that Trump bomb Syria.

Why are you so nervous? Trump just has no choice but to continue to prove that he is not connected with Russia.

Wait. Who killed with gas? Who was killed by gas? Oh, and you once criticized Obama for talking about his plans ... Hypocrite. 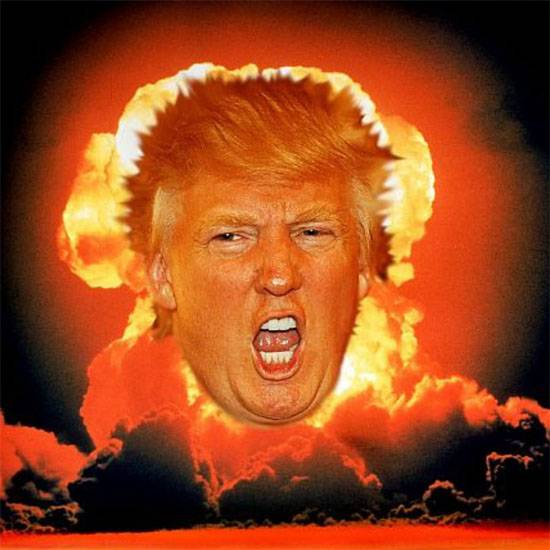 By the way, a few minutes after the tweet calling for Russia to “get ready,” Trump made the following tweet:
Our relationship with Russia is now worse than ever, and this includes the “cold war”. But for this there is no reason. Russia needs us to get help with the economy. And it would be very easy to do, because we need all nations to work together. Stop the arms race?