The war with America in Syria: on the verge or already beyond?

April 13 2018
42
The mediated war with the Americans in Syria actually began from the moment the Russian videoconferencing system entered Syria: both on the ground and in the air, incidents occurred on the verge of, and sometimes beyond, “peaceful coexistence”. Attack drones base in Khmeimim, shelling PMC "Wagner", a number of incidents with American special forces, contact in the air ... 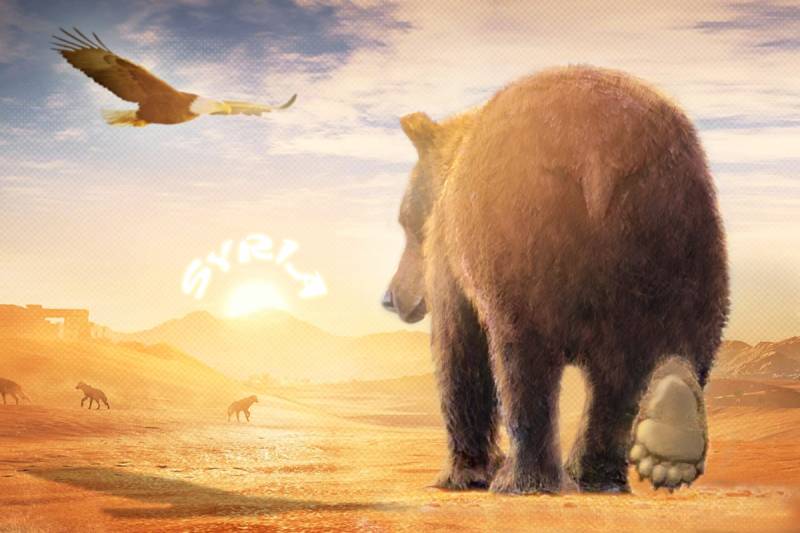 If the main military superpowers on the planet came into direct contact in Syria, then, of course, there is a chance that a spark will erupt between them and a conflict breaks out, or it will be intentionally inspired by one of the parties. Well-known political analysts in various programs have been talking about this for a long time.

The very fact of the entry of Russian VKS into Syria allowed for the possibility of a military clash with the Americans, and, apparently, was taken into account by Vladimir Putin and worked out by the General Staff. On the first occasion, as soon as our Su-24 was shot down by the Turkish Air Force, Putin immediately makes a very sharp and important statement: the Russian Aerospace Forces will destroy any military means of attack in the event of a threat to Russian troops and facilities in Syria. “Any,” the president singled out in a voice, and it was clear that they were American.

The provocation with the Su-24 was most likely inspired by the United States, this version is confirmed by the subsequent attempt of an army plot against Turkish President Erdogan, in which the Turkish Air Force played an active role. This combination was seen by our special services and the incident with the Su-24 was not developed.

Today, the General Staff confirmed the long-declared position of Putin, saying that not only missiles threatening the Russian troops, but also their carriers, that is, warships, airplanes, and possibly military bases, will be destroyed. In other words, nothing fundamentally new in Syria is happening. When the Foreign Ministry and Russia's permanent representative to the UN, Vasily Nebenzia, declare “the gravest consequences for any military intervention in Syria,” they repeat, in fact, Putin’s long-standing statement after the attack on Su-24.

There are semi-conspiracy versions that some kind of US military provocation against Russia had been preparing for a long time, and Putin’s March-to-March report with a demonstration of the latest Russian weapons was intended to prevent this provocation by showing firsthand its “grave consequences”. Allegedly, Putin’s report, which was originally prepared, did not include a section on the latest military developments, it was added at the last moment.

This version is supported by a not very long interview with former US Vice President Joe Biden, in the summer of 2017, in which he repeated the words of Pentagon analysts that they have a maximum of four years to stop Russia, otherwise the United States will not be able to maintain world domination. Then the hawks in the US need to rush into a military conflict with Russia, and the situation in Syria is a convenient excuse to start this conflict for any reason, which we see today in Western hysteria about the alleged chemical attack in the Duma near Damascus.

In this case, there will be no inspections of the OPCW in Syria, the United States will ignore what happened or did not happen in the Duma: it doesn’t matter to them, the United States only has a reason, no matter what a lie, for the war in Syria. The only thing that can stop them is a demonstration of Russia's military capabilities in Syria and in general. If they personally see the "cartoons" from Putin's March 1 speech.

Today, V. Putin has not yet made public statements on the situation in Syria, but he had telephone conversations with Berlin and Paris, and spoke with Trump not so long ago, after winning the election. Maybe that's why Macron and Trump say "about the likely chemical attack in the Duma." Trump is still facing a big price for “everyone for a chemical attack,” namely, Syria, Russia, Iran, but he also needs to weigh the price of “heavy consequences”. All noted that in this series of countries Trump did not mention Turkey, but in fact it is not in the ranks of the voluntary allies of the United States.

If the inspection of the OPCW in the Duma will be disrupted by the United States, it will cause Russia to accuse the United States of blatant aggression, without conducting an investigation, in Syria and act accordingly. If the OPCW inspection arrives at the Duma, this is a chance to get out of this conflict situation, provoked, apparently, by the British special services, which control the only source of this misinformation - the so-called “White Helmets”.

American political scientist Stephen Cohen on the situation in Syria on the air of American TV said that "at the end of this path is war." A war of at least a regional scale, in and around Syria. The positions of the parties here are not entirely obvious. U.S. with satellites have an advantage in the region in aviation, navy, in the bases. But Russia is fundamentally closer to the Syrian theater of operations, its military carriers can operate from the Caspian Sea, maybe the Black Sea, strategic aviation has already tested the Iranian route of approach to Syria and US bases in the Persian Gulf.

Finally, no one knows the combat capabilities of the hypersonic Avangard, which is deployed in the North Caucasus, and other “cartoon” weapons of Russia. Actually, the “grave consequences” that our Foreign Ministry is talking about may follow precisely from these weapons.

The key question posed by our liberal attorneys of the West in connection with the Syrian events was: was it worth it for Russia to enter its VKS into Syria, perhaps, it was better to give it to the Americans? No, it is not better, it was as necessary for Russia to go to Syria as it was to save the Crimea, and to defend itself with the help of Crimea and Donbass from the American and Bandera expansion in Ukraine.

Hillary Clinton, when she was secretary of state, said bluntly that in the Middle East, the United States would completely "arrange moderate extremist regimes." Without the intervention of the VKS RF in Syria, there would have already been established a “moderate” extremist regime, overrun by militants from the post-Soviet space, which would become the basis for the expansion of this “Caliphate” to the Kurdish regions of Turkey and Iran with a final exit to the borders of Russia, the extremists did not hide these plans. By the way, the informal union of Russia, Turkey and Iran in Syria is explained precisely by this circumstance that all three countries could become objects of expansion of an extremist neoplasm in Syria under the auspices and with the support of the USA.