April 11 2018
47
The official version of the death of the Russian nuclear submarine "Kursk" was called an explosion of torpedoes 65-76 "Kit", which submariners were supposed to use in exercises. The official report on the tragedy, which was ready in 2002, said that in 11 hours 28 minutes 26 seconds, an 65-76 "Kit" torpedo exploded in the torpedo tube No. 4 of the Kursk. The cause of the explosion was the leakage of the components of the torpedo fuel (hydrogen peroxide). Two minutes later, a fire that occurred after the first explosion caused the detonation of the remaining torpedoes in the first compartment of the boat. The second explosion caused the destruction of several of the front compartments of the submarine, the boat sank, all 118 officers and sailors aboard the Kursk died.


This version looks quite convincing, such torpedoes were considered unsafe before the crash with the Kursk boat, there was a statistics of incidents with their participation. After the death of the APCS K-141 "Kursk", this torpedo was removed from service as unreliable.

It is worth noting that the detonation of ammunition on navy often became the cause of severe fires and destruction, which led to human casualties. Strong fires in the 1960s nearly destroyed several U.S. Navy carriers, including the pride of the U.S. Navy - the world's first nuclear-powered aircraft carrier USS Enterprise, killing hundreds of their crew members in total. Americans don’t like to remember this, but you won’t erase words from a song.

To ensure that the combat units are deadly weaponswhich all modern ships and submarines are armed with, in no case did not receive mechanical damage and did not heat up, try to constantly monitor. However, only one defect or fatal coincidence of circumstances, an accident, can cause a catastrophe that turns around human victims. So, 26 of October 1966 of the year on board the US aircraft carrier USS Oriskany, which was launched as early as 1945, someone from the crew accidentally lit a false flare, was taken aback and, panicking, dropped it. Instead of just throwing the hand flare overboard, the sailor threw the hand flare into the drawer that held the other hand flares and the flares. The entire contents of the locker instantly flashed. The fire that started in the nose of the hangar deck of an aircraft carrier caused the death of 44 people, among whom were many experienced pilots who were veterans of the Vietnam War. 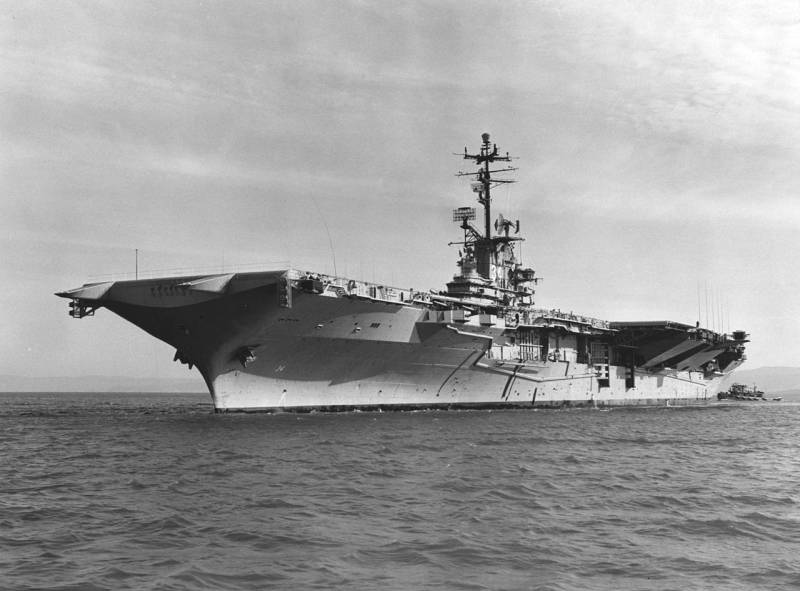 USS Oriskany aircraft carrier
The ship was seriously damaged and went to the Philippines for repair, and then to the USA. Repair work was completed only on 23 March 1967 of the year. In July, the 1967 of the year, the aircraft carrier was again used by the Americans to provide air cover for their troops operating in Vietnam. True, now USS Oriskany also had to assist another American aircraft carrier - USS Forrestal, on board of which there was also a terrible fire, even more destructive and with even greater losses among the crew members. At the same time, American warships broke down and did not receive serious damage due to any opposition from the enemy.

Now the fire on the aircraft carrier "Forrestol" is called one of the most significant incidents that have occurred with US aircraft carriers over the entire period of their service in the fleet. The strongest fire broke out aboard the July 29 1967 aircraft carrier. As a result of this incident, 134 people died, another 161 person received injuries of varying severity. Material damage to the ship amounted to 72 million dollars (more than half a billion dollars equivalent to 2008 a year), and this is still without the cost destroyed by the fire, as well as the aircraft dropped by the crew. After the fire, the 21 aircraft was deleted from the naval register.

According to the official conclusion of the commission, the cause of the fire on board the USS Forrestal aircraft carrier was the spontaneous launch of a 127 mm uncontrolled aviation Mk 32 “Zuni” missiles due to an accidental power surge in the circuit of one of the F-4 Phantom fighter-bombers standing on deck. The aircraft, like many other cars on the deck, was prepared for air strikes across Vietnam. This launch of a rocket launched a chain reaction, which almost led to the death of the entire aircraft carrier. In the course of this incident, the future American politician John McCain, who escaped with only shrapnel wounds, could die.

The carrier, on which McCain served as a pilot, was named after the first US Secretary of Defense, James Forrestal. For the fifth day, he was on combat watch off the coast of Vietnam in the Gulf of Tonkin. In the morning, the pilots and equipment prepared the planes for the second sortie. In total, 7 of the Phantom fighters, 12 of Skyhawk attack aircraft and 2 of the Vigilant reconnaissance aircraft were to take part in it. They were all on the flight deck. 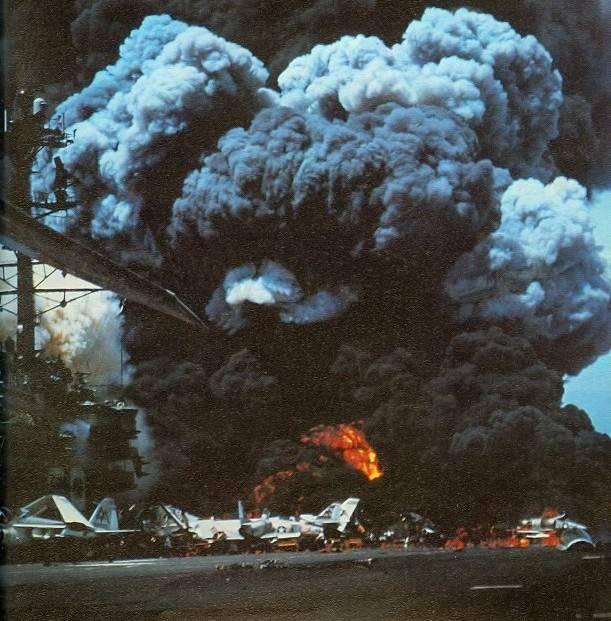 In 10: 53 local time 29 July 1967 of the launch of one of the "Phantoms" spontaneously launched an unguided rocket "Zuni". She did not explode, hitting the target. Perhaps the incident would not have turned into a tragedy if the rocket had not landed in the Skyhawk outboard fuel tank. The tank pulled away from the wing of the aircraft, and the fuel that spilled onto the deck instantly flared. The fuel tanks of other aircraft began to explode from overheating, the deck of the aircraft carrier covered the flames, clouds of thick black smoke appeared above it. After a few more minutes, the bombs began to burst aboard the ship.

The first in 1,5 minutes after the start of the fire was an old-fashioned bomb AN-M65, which fell from the suspension of one of the aircraft. The explosion completely destroyed the aircraft, and also left a hole in the deck. Scattered by fragments at the time of the explosion, the fire brigade working on the flight deck, in which only three people survived, was all injured. The shards also pierced the tanks of two more nearby combat vehicles.

A total of 9 aircraft bombs exploded on the deck of the Forrestal aircraft carrier, including the old AN-M8 bombs with Composition B explosives (an explosive that is a flowable mixture of hexogen and trinitrotoluene) and just one new bomb that detonated with a close ruptured AN-M65. In the future, this explosive was replaced by a more fireproof. Bombs struck several holes in the flight deck through which burning aviation fuel began to penetrate inside the ship — into the flight hangar and into the crew’s living quarters. 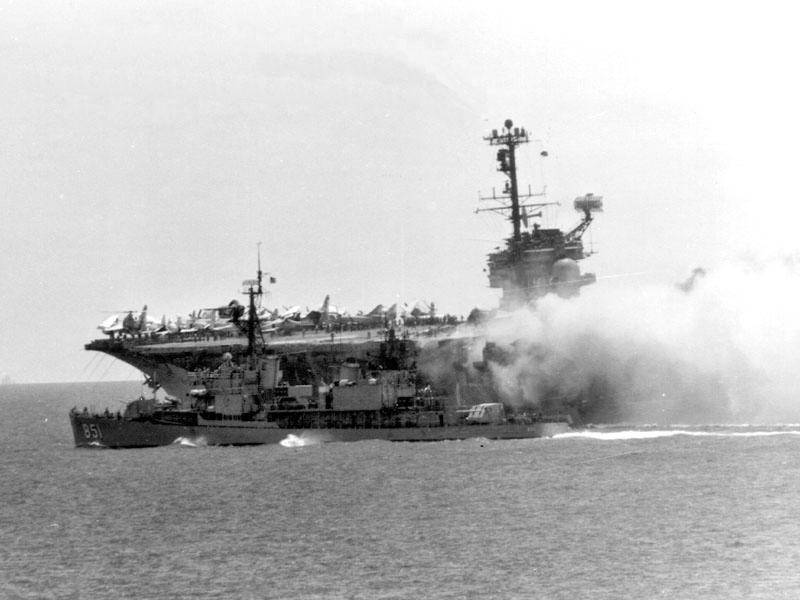 
The fire on the flight deck was localized in 12: 15, in the interior of the ship - to 13: 42. It turned out to completely extinguish the fire only by the 4 clock the very next morning. After the fire, the aircraft carrier looked as if it had survived a fierce battle, although the fire brigade began to extinguish the fire immediately. In this case, the pilots themselves pushed the surviving aircraft overboard, and also sent ammunition into the sea, which were on the flight deck of the ship. As a result, the 21 aircraft was lost, and 42 vehicles were seriously damaged. The fire demonstrated that on the flight deck it was necessary to have heavy armored forklifts, since the efforts of the crew were not sufficiently effective in trying to throw burning aircraft overboard. The aircraft carrier was permanently out of order and was under repair until April 8 1968. After the fire, the ship received a scornful nickname Fire Stall - Fire Stall, which beaten the real name of the aircraft carrier.

Both incidents described above occurred with American aircraft carriers that were directly involved in the Vietnam War. However, the third major accident occurred on a ship that did not participate in the battles at that time and did not even come close to the theater of military operations. This is the first atomic carrier in the world - USS Enterprise, which cruised 1969 in January to 70 nautical miles south-west of Pearl Harbor. The carrier was on the exercises, along with him were also the missile cruiser USS Bainbridge and the destroyer USS Rodgers. All three ships were at the exercises, but the fighting began for them earlier than they had planned.

The disaster occurred on the morning of January 14, 1969, at about 8: 15 local time. After the first batch of aircraft went into the sky, the second wave was preparing to fly. On deck, there were 15 airplanes, including the F-4 Phantom fighter jets, A-6 and A-7 fighter attack planes, Ka-3 tanker aircraft and Grumman E-2 Hawkeye Airliner aircraft. All aircraft were lost (the value of each of them was estimated at 5-7 million dollars).

As in the case of "Forrestol", the cause of the disaster was NAR "Zuni". This time the spontaneous explosion of the NAR Mk 32 "Zuni" warhead. Later, the commission concluded that the explosion occurred due to overheating of the missile warhead. Overheating was caused by a rather long impact on the rocket of a jet stream from the engine of another fighter-bomber F-4J "Phantom II", who was on the flight deck and was also preparing for departure. A powerful explosion of a rocket, the explosive of which on 60 percent consisted of RDX and 40 percent of TNT, destroyed the Phantom fuel tank, after which JP-5 jet fuel poured onto the deck. Soon three more fighters were burning, and the first victims of the fire were the pilot of the fighter-bomber and two technicians who prepared the car for departure. 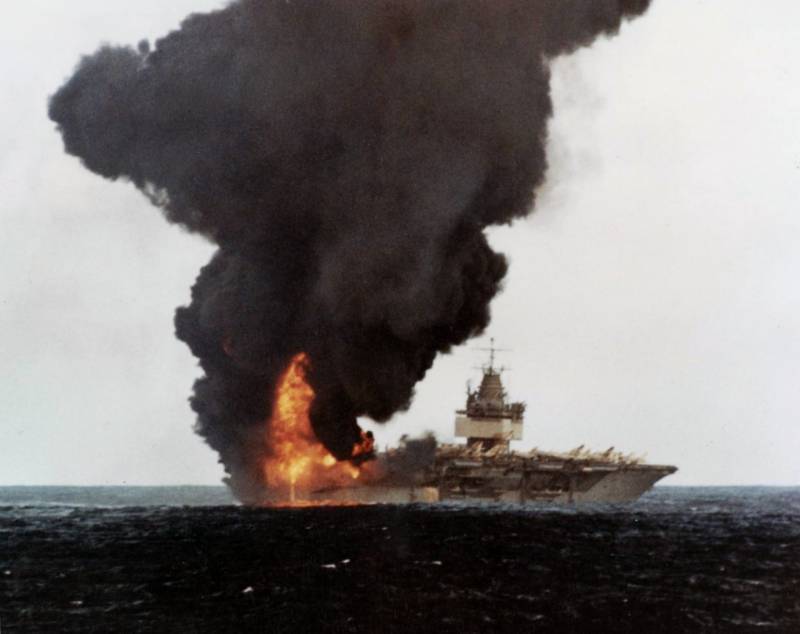 
After that, three more spontaneous launches of the NAR “Zuni” occurred, and then the Mark 82 aerial bomb exploded aboard the aircraft carrier, which made a hole in its deck with a radius of 2,5 meters and the fire penetrated three decks down. As eyewitnesses later recalled, shrapnel flew all over the deck of an aircraft carrier, all the stocks of fire extinguishing foam, like fire hoses, were destroyed by an explosion. People were dying on fire on deck. Every minute the situation only worsened. Because of the fire, the stand was detonated at once with three Mark 82 bombs. This explosion caused the appearance of a six-meter hole in the deck. The fire, meanwhile, was transferred to the Ka-3 tanker, and thousands of liters of aviation fuel were burning. In this case, the flame and smoke almost paralyzed the process of controlling the vessel.

In total, 18 explosions were noted on board the aircraft carrier, each of which could be attributed to direct hits of bombs or missiles. In many respects, the aircraft carrier was saved by the fact that its captain Kent Lee deployed the vessel so that the wind began to blow smoke from the deck and superstructure, providing a good overview from the navigating bridge. The sailors again dropped into the sea planes and ammunition stored on the deck. This was an extremely risky exercise, but the team simply had no other choice. The destroyer USS Rodgers also helped the injured ship very in time. He risked himself next to the aircraft carrier at risk, using all available means to extinguish it.

The sailors managed to locate the fire on the deck of the aircraft carrier 40 minutes after the first explosion. It was possible to completely extinguish the fire only by 12 clock local time. In total, the fire and explosions of ammunition on board took the lives of 28 people, the injured were much more - 343 people. The ship was seriously damaged and departed for repairs at the docks, the cost of repairs was estimated at 126 million dollars (in 1969 prices of the year). Read more... 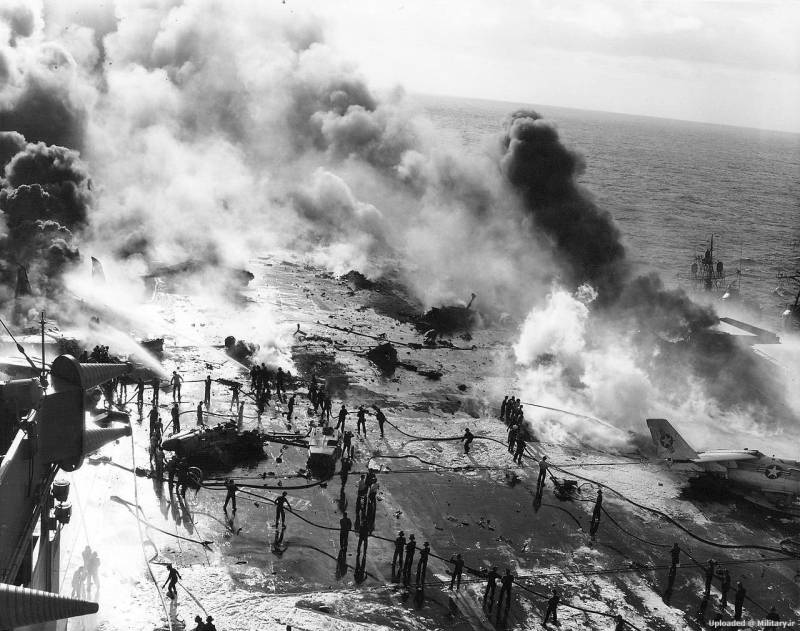 Emergency teams are fighting for the survivability of USS Enterprise

After a series of such disasters, which claimed more than two hundred lives, the Americans drew certain conclusions aimed at preventing similar situations and increasing fire safety on ships. For example, manufacturers of missiles and bombs began to make them more resistant to high temperatures. On aircraft carriers began to mount special deck irrigation systems. More attention was paid to the training of ships' crews in safety regulations and behavior in extreme situations.