April 11 2018
57
The outcome of a possible military duel between Russia and the United States in Syria depends not only on the fate of this country, but also on the future of all mankind. 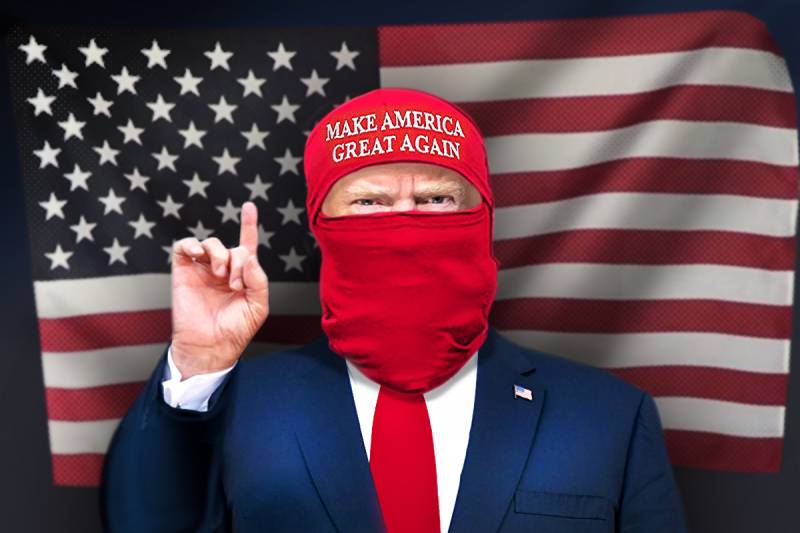 I had only to pay attention to that factthat, despite the extreme militaristic hysteria of the US leadership, there is not a single American aircraft carrier in the 5 radius thousands of miles from Syria, which casts doubt on the trump quality of Trump's military ambitions and announced that they were sending a carrier-based strike group to the Mediterranean Sea with "harry truman".

This is, of course, a joke. But so it was. Thus, they are still trying to identify something like a military threat. True, in all American military textbooks it is written in black and white that one aircraft carrier is suitable only for displaying the flag, but not for war. And for a little bit of a serious military operation, they need at least three, and even better, six. So I don’t leave my doubts about Trump’s real readiness to cross the military Rubicon.

However, on the "VO" I am prompted by some experts on the question that this is, they say, a somewhat one-sided view of the problem. As for the Americans, they say, there are a lot of things on land too. So a strike on Syria can be inflicted even in the absence of a decent naval group. Here, for example, is:

Shura Sailors (Alexander)
From the sea may not have to expect (!?). And what happens at military bases nearby Syria? What forces are collected, what are the combat capabilities of these forces. Do not forget about the allies of the United States in the region. And that in stories After the Second World War, there was not a single case of military attack on any of the coastal foreign countries without the involvement of major US naval forces, especially attack aircraft carriers, yet does not mean anything.

Well, the question is quite legitimate and requires an exhaustive answer. Indeed, what is the author so fixated on the US Navy, when the Yankees can hit Syria directly from the surrounding territories?

I answer. Maybe they can. That's just unlikely to be decided. Here’s what a hitch is looming ... A strike from the sea, and not even deck aircraft aviationand exclusively Tomahawk cruise missiles - a favorite type of American military sport. Guess once - why? Right! Because this species is the safest. The maximum that they risk at the same time is a waste of a certain number of cruise missiles.

The American elite is most worried about the flow of coffins under the stars and stripes. And since such a strike option completely eliminates them, then, as a rule, they prefer it.

So! A strike from the land will not be so painless for Americans. In any case, the main role in it will be played by manned military aircraft. For the simple reason that the shock rocket weapons There are practically no land bases with a range of at least several hundred kilometers in the American army. It did not fit somehow into the Pentagon concept of aerospace war. And the loss of aviation during a massive strike will be very significant. Even though they will try to launch their cruise missiles without entering the enemy’s air defense zone.

However, this concept, the “impact zone”, has become very stretchable in modern times and may turn out to be much wider than the borders of the attacked country. Especially considering the presence of long-range air defense fighters on the defensive side with air-to-air missiles flying hundreds of kilometers more.

And this is just what concerns the use of strategic aviation. Tactical air groups of the United States and its allies will be forced to act in conditions of maximum anti-aircraft "heat" and their losses will be guaranteed high.

And this is exactly what the gentlemen from Washington really do not like, who do not at all want to be responsible for the accelerated burning of the myth of the invincibility of the US Air Force in the sky over Syria.

In general, something tells me that this dubious option, a strike from land airfields, they will not give their "good". For the risk is too great. Speech in this case, of course, is not about the pilots, they wanted to spit on them. But about the precious reputation of the Washington bosses themselves. And with this they do not like to joke.

So it turns out that nothing really acceptable, except pulling up fleet and blow all the same "Tomahawks", they have no soul. And in order to prevent another shameful Shairat from happening, over which the whole world made fun of the bombing, the Americans really need to pull something else apart from a couple of destroyers on duty. Already Truman with an escort was sent there. And they are unlikely to stop there. But all this takes time. Two weeks at least, but in a good month.

That in itself is very significant. Since the same Russia during this time can literally stuff Syria with its most advanced air defense / missile defense and electronic warfare systems in the world. Which is already there a lot.

After that, with the trump card of the American military strategy, thereby supposedly an irresistible massive strike of the "Tomahawks", there can be complete ill luck.

After all, it is still not clear to the curious world community where the good half of the American Toporovs, launched at Shairat air base a year ago, have gone. After all, they obviously did not fly there, if this base in a couple of days earned as usual.

The question is not idle. The fact is that the time of the world-historic victories of America with the help of its winged "vundervaffe" is somewhere far behind. It was good for them to hammer the same Yugoslavia or Iraq with Tomahawks in those antediluvian times when there was practically no effective antidote against them.

Since then, world progress, to the chagrin of the Pentagon generals, has gone far ahead. And the "Tomahawks" as they were "axes" remained. Only now people specially trained to deal with them and computer programs read in this “miracle weapon”, as in an open book. And after reading, knock them down without pity and without an account. About the way it was in Shairat. And it can happen again on a larger scale if Trump isn’t joking.

The Russian air defense system, deployed in Syria, is ideally suited to effectively repel a massive attack by cruise missiles on such a relatively small country. And she will have no reason not to demonstrate her enviable capabilities to the aggressor.

Thus, this once most comfortable and not burdensome for the USA type of warfare this time can give a very strong misfire. So strong that even the possible bloody consequences of the massive use of manned aircraft for the United States will fade before it. Because in this case not only some unpleasant blood loss can happen, but something much more terrible for America. Namely, the fact that its military power in the eyes of the whole world will break its teeth about the even more formidable military force of Russia.

It is precisely at this point that the main intrigue of the current confrontation in Syria lies. Because this is not even about this country itself, but about the possibility of a collision between two military strategies and technologies of warfare. And it depends very much on who gets out of this fight as a winner. The US defeat, which will become apparent if its traditional military trump card (attack by cruise missiles from the sea) fails, will have the most far-reaching consequences for the global geopolitical situation.

And America simply cannot tolerate it. Even if the incredible happens and all the "Tomahawks" achieve their goals, it will be just a hundred or two ordinary, and not the biggest bombs. As for their notorious precision, they also figured out how to deal with it in Yugoslavia - just to remove people and, if possible, equipment away from buildings that could become targets. I myself saw the broken Tomahawk building of the Ministry of Internal Affairs in Belgrade, which was empty at the time of the strike. Already somehow it was necessary to write that during the Second World War the same Americans dropped thousands of approximately the same TNT bombs on German cities in one day. But it almost did not wag the war.

Moreover, this time all the “Tomahawks” will not reach the targets exactly. It is unlikely that even half will reach. And this will mean only one thing: finita la comedia! Contactless war for America will end, but in contact it has no more chances than others.

From this point on, it will become clear to all that the American "king" is absolutely naked and can no longer confirm his global ambitions with convincing military force. And it will become quite obvious that any country capable of building a reliable air defense / missile defense system, at least with the help of Russia itself, will receive an impenetrable America trump card. And he will be able to talk with Washington without regard to his decrepit military fist. And this, if you will, is a genuine geopolitical revolution on a global scale. Because the current American global hegemony rests only on force. Which is regularly confirmed by indicative executions in relation to the most obstinate.

So, if in Syria it really comes down to a direct clarification of relations between the Russian Federation and the United States, then Russia will defend not only itself and Syria, but the rest of the world, which really needs an effective remedy for American global expansion.

And although the stakes are very high, the aggressor has never been so vulnerable, and the defending side was not so well prepared to repel an enemy strike. It is possible that in this lies the providence of providence, who appointed the change in the course of history precisely on the land from which this story had once begun.

Ctrl Enter
Noticed oshЫbku Highlight text and press. Ctrl + Enter
We are
Situational analysis of the death of the MH17 flight (Malaysian Boeing 777), made on the basis of engineering analysis from 15.08.2014Results of the week. “In our cooperative, the board is always agreed”
Military Reviewin Yandex News
Military Reviewin Google News
57 comments
Information
Dear reader, to leave comments on the publication, you must sign in.