Strike on Syria: the United States is fighting with Israeli hands?

April 10 2018
43
Immediately after the announcement of the London-based Syrian Observatory of Human Rights, which announced after the Israeli attack on the Syrian airfield T-4 that there were Iranians among those killed in the rocket bombings, Tel Aviv would explain its actions by the need to “restrain Iran” . 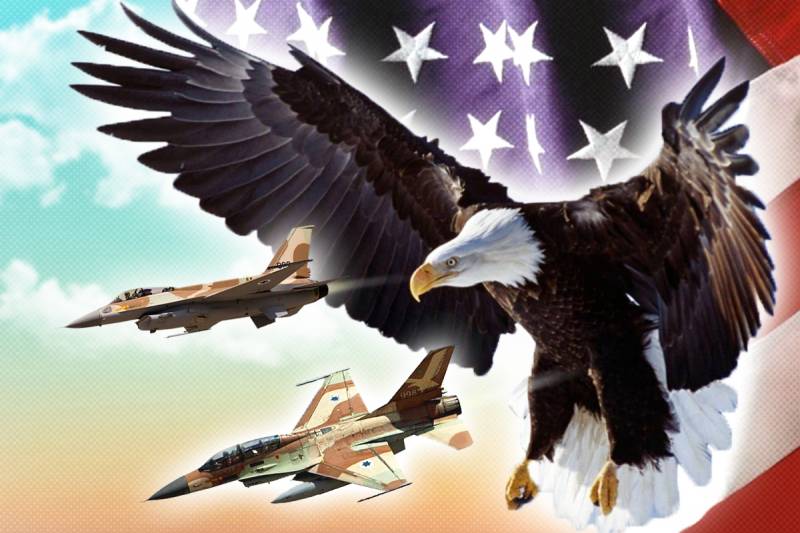 Recall that the Israelis explained the strike on the same 10 airbase in February by launching an “Iranian drone” to the Israeli border, allegedly carried out from this base.

However, it is obvious that with such methods Israel will not be able to prevent the strengthening of its position in Iran, not supplying Hezbollah with modern weapons.

Moreover, there is every reason to say that through its actions to support the terrorists, which Israel has been carrying out throughout the entire Syrian conflict, it directly contributes to strengthening the position of Iran and Hezbollah not only in Syria, but in the world.

After all, Tehran has now become one of the main participants and guarantors of the national reconciliation program in Syria, and the members of Hezbollah have gained worldwide fame as irreconcilable and courageous warriors with “caliphates” and other “jihadists”. Who would have assumed before the start of the Syrian events that the Lebanese resistance fighters would become actual allies and brothers in arms Russian Armed Forces?

Of course, one cannot say that this is entirely the merit of Israel, but the fact that Tel Aviv poured a lot of gasoline into the Syrian bonfire is well known. And his new provocations, aimed at escalating the conflict, only strengthen the positions of his opponents and strengthen sympathies towards them in the world.

To this we can add that such actions seriously complicate the relations of the Jewish state with Moscow, which emphatically avoids conflicts with Israel.

Of course, we can assume that in this way Tel Aviv is avenging for the downed F-16 (as well as the damaged, rumored F-35). But the revenge was not very convincing: of the eight rockets frightened from the airspace of another state, three were shot down. And Tel Aviv was in no hurry to recognize the authorship of this pirate attack.

At the same time, the attack was so much in American logic that initially many observers attributed it to the United States.
Recall that on the eve of the strike, Trump broke out with a portion of areal battle against the head of Syria, Bashar al-Assad, and uttered quite definite threats against Moscow and Tehran, which, according to the American leader, "will pay a high price." The reason for Trump's speech was the fake message about the gas attack in the Duma.

A few hours before the Israeli strike, Senator John McCain called on the American "to repeat the action of retaliation" against Syria.

Since Donald Trump stated that the US is preparing a "response to the use of the Assad regime of chemical weapons in Eastern Ghouta," in the evening of April 8, the Russian contingent in Syria brought the air defense system to full combat readiness. According to some reports, the Su-30CM and Su-24 RF Aerospace Force of the Russian Federation established permanent control over the US Navy grouping in the Mediterranean.

It is noteworthy that, according to the first reports of the attack, the missiles were fired from an “unidentified” ship in the eastern Mediterranean.

That is, the general situation was such that, hypothetically, the Israelis could have provoked an armed clash between Russia and the USA with their blow.

However, even Tel Aviv is difficult to suspect of such recklessness, especially since this conflict would break out in close proximity to the borders of the Jewish state.

There is no doubt that Israel and the United States (with whom the leadership of the Jewish state most likely coordinated its gangster attack) are convinced of the accuracy and effectiveness of the Russian objective control systems, which allow us to exclude American authorship of the attack. How, in fact, happened.

If we reject the rather high threat of a direct military conflict with Russia, on the whole, it is very beneficial for Washington, who received the opportunity to “punish Damascus” for invented transgressions, through their own hands, practically without exposing themselves to the danger of the Russian “response”. Moreover, the States not only save their faces in this way, but also show that they are able to act by proxy.

Well, finally, the Israeli attack is just another “reconnaissance in force” aimed at opening the Russian and Syrian air defense systems. In this sense, what has happened can be viewed as preparation for new, even more ambitious attacks and provocations.

However, to assert that Tel Aviv acted on the order of Washington would hardly be correct. If only because the policy of the current US administration in the Middle East is largely subordinated to the interests of the Jewish state. So the question of who serves whom is probably rhetorical.

More importantly, the two of these states, by their irresponsible actions, create the threat of an armed conflict between nuclear powers that could result in a world war.

Ctrl Enter
Noticed oshЫbku Highlight text and press. Ctrl + Enter
We are
Situational analysis of the death of the MH17 flight (Malaysian Boeing 777), made on the basis of engineering analysis from 15.08.2014Syria: Americans scare themselves, and Asma Asad buys chairs
Military Reviewin Yandex News
Military Reviewin Google News
43 comments
Information
Dear reader, to leave comments on the publication, you must sign in.