The right to know. Sorry, right not to know!

April 10 2018
35
In the “Right to Know!” Program from April 6, Yevgeny Kulikov received the leading expert of the US Atlantic Council, Ariel Cohen. This organization makes recommendations to the State Department on foreign policy in relation to Russia and the world, predicts “color revolutions”, for example, the new Ukrainian “anti-corruption”, hears the newly elected presidents (including Petro Poroshenko). That is, Ariel is an expert from the organization of a solid, frankly hostile Russia, albeit of Russian origin. However, for some reason, our experts believe that if a Western expert speaks Russian and pretends to be good to Russia, then we can talk to him “on the Hamburg bill”: he will answer the questions posed openly. 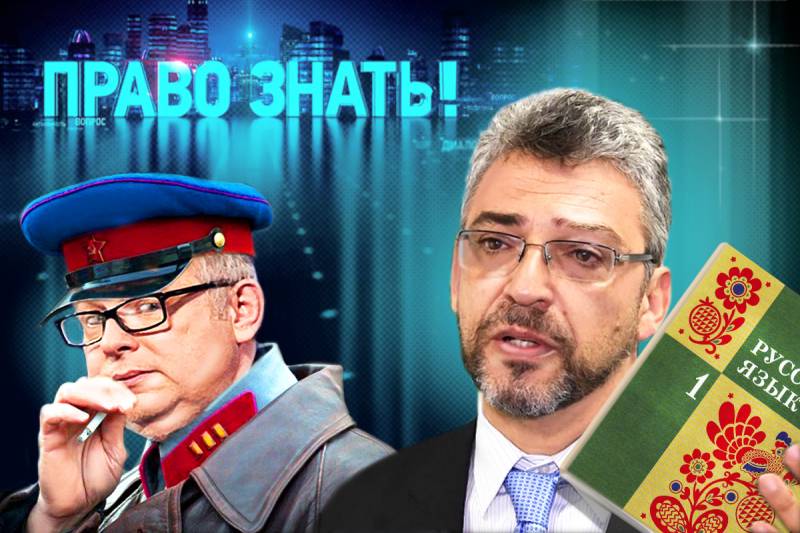 In general, this happens with Western political scientists of Russian origin, Dmitry Simes often answers "according to the Hamburg bill", but he is not part of the Atlantic Council, probably, this is a certain sign. Ariel Cohen responded as a true atlantist, in the style of "when Russia stops its aggressive policy", paraphrasing his maxim: "When will you stop beating your wife?"

Ariel turned as if on a griddle, and our experts with their politically correct and solid questions like “Why did the USA betray its Kurdish allies in Rakka” always got a finger in the sky. Because Cohen always answered simply: this is what you think, but the Atlantic Council ... and in general, the Kurds are your longtime allies. And the “Case of Skrypal” is muddy, and nothing is clear to me, like you. Answers to Ariel, as it were, are given, but the fact that they are not experts and in general about anything is another question.

In principle, on a talk show, unplanned questions should not be asked by opponents in any case, this is written in any ancient Greek textbook of rhetoric, but our experts and leaders on this issue retain amazing ignorance, they constantly ask the opinion of "respected" Ukrainian and other experts: what are they thinking about this? And the experienced Bandera starts his favorite song, as he is sorry that he failed to “restore order” in the Crimea. The question to the opponent gives him the right to vote, the right to conduct his own propaganda, mocking this nonsense of the other side, but our well-behaved experts still cannot understand this.

Ariel Cohen spoke in the program, which meant questions to him as an invited expert, so it was impossible to avoid questions, but then they should be simple, not theoretically Hamburg, and the best of them is the truly brilliant question: "How to get to the library?" This refers to its construction, which implies an unequivocal answer: either to say how to get past, or to admit one's impotence. There are always reasons for such questions.

The United States has just introduced new sanctions against Russia "for malicious acts around the world." How can Russia talk to the USA after that, and what about? In the light of the fact that our Atlantic expert constantly calls for dialogue and the search for certain points of contact. Where would he recommend the State Department after this look for points of contact?

Why not ask a simple question: how will America react if Russia, together with China, helps the national forces in Mexico carry out the liberation Mexican and anti-American revolution for the sake of the prosperity of world humanity?

In the case of “The Violin”, it would be interesting to hear from Ariel, and other “respected Western experts,” the answer to the question: “How was Russia to respond to Theresa May’s ultimatum: to recognize the Russian origin of the Novice OS, allegedly used in Salisbury? This is an ultimatum in the style of “when will you stop beating your wife?” How would the US respond to such an ultimatum from, say, Mexico or Brazil? Then, as in the case of the library, the expert still has to answer “according to the Hamburg bill”, or confess that he is not an expert at all, and does not know how to get to the library.

I would ask Ariel the following question: how does he feel about the destruction of Russian special forces, perhaps of the Wagner military complex, an unknown terrorist group that has committed a high-tech attack by drones of the Russian base in Hamim? Then the American reconnaissance aircraft "Poseidon" just flew to Hamim. After this incident, a series of ground combat clashes began in Syria, in which both the Wagner PMC and the American special forces suffered, quite by accident?

It’s strange that our leading experts are punctured on such rhetorical trifles, they don’t understand that Western political experts don’t make sense to ask general political and ideological questions, look for a “Hamburg bill” with them - they always get a muddy political answer about anything that was done constantly in the Kulikov's program “The Right to Know!” our friend Ariel Cohen.

Ctrl Enter
Noticed oshЫbku Highlight text and press. Ctrl + Enter
We are
Our friend Dmitry SymesResults of the week. “If I am leaning against a warm wall in a quiet place, then I’m still nothing at all!”
Military Reviewin Yandex News
Military Reviewin Google News
35 comments
Information
Dear reader, to leave comments on the publication, you must sign in.