The situation in Syria. CAA advance in the Duma

April 9 2018
38
The militants agreed to an agreement with official Damascus and are preparing to leave the Duma in Eastern Gute. YPG troops attacked a stronghold of the Turkish army inside the canton of Afrin. Reports about it FAN with reference to Syrian sources. 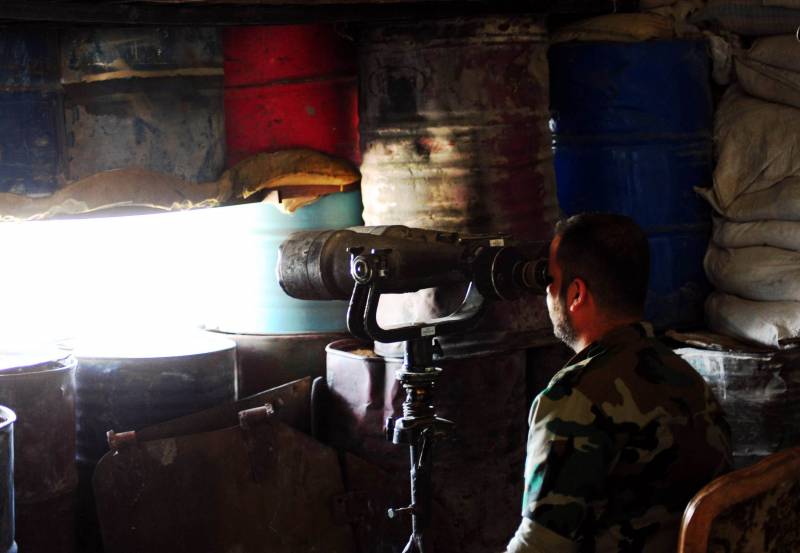 On the eve of the morning, units of the Syrian Arab Army (CAA) have advanced significantly in the sweep of the territories around the city of Duma - full control was established over the area with a total area of ​​19 square kilometers. Later, the opposition group "Jash Al-Islam" announced its decision to resume peace negotiations and rejoin the regime of silence. In the afternoon there was a meeting of representatives of the grouping with officers of the Russian Reconciliation Center. As a result, a number of agreements were reached. Under the new agreement, the militants must release all prisoners, in which case they will be able to evacuate to Jarablus in the north of the country.

The Kurds from the Popular Self-Defense Forces (YPG) attacked the command post of the Turkish army in the village of Kafr Safra, located north-west of Jandaris in the southern part of the canton of Afrin. As a result of the attack, three Turkish soldiers were killed, two more were injured. The headquarters of the Armed Forces of Turkey was completely destroyed. Meanwhile, Turkey sent reinforcements to the city of Darat Izza northwest of Aleppo. Additional units were deployed to assist the pro-Turkish forces of the Free Army in the fight against the terrorist alliance.

A large explosion occurred in the settlement of Muzairib, north-west of Dar'a, controlled by the SSA - it worked out an unknown IED. Three people were injured, among them one woman.

The Syrian Democratic Forces (SDF) arrested 12 residents of the village of Kasrat Faraj, located in the southern suburb of Raqqa. This event was preceded by the fact that the Kurds found the body of one of the SDF fighters, killed by unknown persons, on the outskirts of the village. In the east of the province, an uprising of Arab tribes has recently risen against the presence of Kurdish militias and US coalition forces in the region. Recall that during the campaign in northeastern Syria, SDF units went far beyond historical places of residence of the Kurds, while capturing the country's largest oil and gas fields.

Ctrl Enter
Noticed oshЫbku Highlight text and press. Ctrl + Enter
We are
Ankara went to unexpected measures in an attempt to beat Moscow and Damascus. Commando and "al-Nusra" in Tayip's cunning planBonuses from the possible failure of the "Olive Branch": the United States is looking for tools to deploy contingent in the west of Aleppo
Military Reviewin Yandex News
Military Reviewin Google News
38 comments
Information
Dear reader, to leave comments on the publication, you must sign in.