The monster lies woke up

April 9 2018
31
We live in a terrible time, when the slightest injection of false information can provoke unpredictable consequences. The explosion of the information bomb drags the explosions of real bombs. One word of untruth entails many unjust deeds.


The provocation, about which Russia had been trying to warn for a very long time, nevertheless “rushed”. And when? Right on the Orthodox Easter! In the country where it happened, there is a minority of Christians, especially Orthodox. But the provocation is also calculated against another country - the one where Easter is most widely celebrated. Our country. 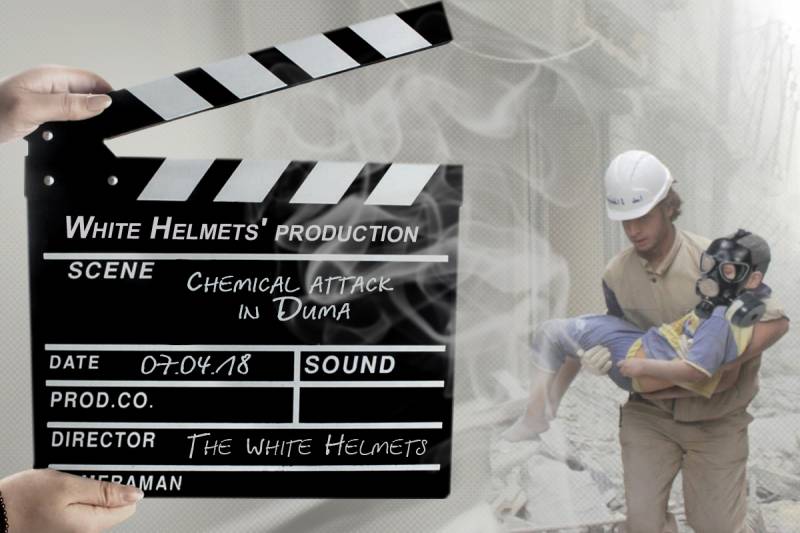 At first, reports about 40, then about 70, as a result of the alleged himatak in the Syrian city of Duma, seemed utterly absurd. Another hoarse of agonizing terrorist groups, who did not like the offensive of the Syrian Arab army on their last stronghold in the Eastern Guta region (Damascus province). But now it can be seen that the powerful Western “uncles” in expensive suits and ties are ready to believe the dirty, unshaven, lousy bandits, who appear as if from Hollywood horror films. That is how the United States once portrayed Islamist extremists who declared war after the events of 11 in September of 2001. And, it turns out, in fact, "uncles in jackets" and "shaggy boats" are on one side of the front.

This, of course, has happened before: a fabricated chimataka, an explosion of an “information bomb” about this, loud statements by politicians — and the inevitable increase in interest rates in a bloody game. It would seem that the theme of the mythical chemical weapons is so outdated that it would be time to change this hackneyed record. But the fact of the matter is that in some strange way this scheme works again and again. To public opinion, the same stale, rotten product is being pushed each time, without even bothering with beautiful packaging. And society is eating ...

However, this time in the "packaging design" included a certain element of novelty. Now, one of the key allies of Syria - Russia - is already presented as a force capable of arranging a chemical attack ... already in the British kingdom! True, it turns out that she used such a "chemical weapon" that cannot really kill anyone. But Western society "ate."

And now, nine countries are demanding to convene an emergency meeting of the UN Security Council about the mythical himataki in the Syrian Duma, not trying to ask the basic question: who benefits and why? Again, the Syrian army and the legitimate leadership of this country are trying to present in the form of "weak-minded but courageous", who allegedly want to spoil a successful operation against terrorists and break the "red line" at the most inappropriate time.

However, the time for lying is just the most appropriate. Shortly before this, at the end of March, US President Donald Trump made loud statements speaking in Ohio. He said that it was time for the American troops to leave Syria. He lamented that a lot of resources that could be spent on the development of infrastructure projects, burn in the sands of the Middle East. He asserted that soon this would be ended.

Against this statement Trump generals of the Pentagon. One of them, the head of the Central Command of the Armed Forces, Joseph Votel, gave a belligerent speech at the Institute of Peace (!) That the presence of American military personnel is necessary for the “fight against terrorism”. And then the US Permanent Representative to the UN Nikki Haley, during a lecture at Duke University, repeated the same thing: US participation in the Syrian war is necessary. There was an inevitable question: does the opinion of President Donald Trump have at least some weight in the United States?

Now, after the dissemination of very, very muddy information about the use of chlorine in the Syrian city of Duma, which is under the control of irreconcilable radicals, Trump no longer wants to leave Syria. Once again, calling SAR President Bashar Al-Assad "the beast", he calls for the most brutal measures against Damascus. He claims that it was necessary to bomb Syria back in the 2013 year (when the government of the Middle Eastern state had not turned to Russia for assistance).

Wow, what a coincidence! A year ago, also in early April, there was a similar hysteria about chemical weapons, allegedly used by the Syrian army in the village of Khan Sheikhun. This stuffing spawned a rocket attack against Shairat airbase.

Now the situation is very similar to the one a year ago. But evidence of the involvement of the Syrian army in the incident in Khan Sheikhun this year was not. Where is the objective investigation? Where are his results? Where are irrefutable facts that can firmly nail the “bloody Syrian regime” to the pillory?

So far, the pillory is the United States itself. Those who staged 7 April last year unprovoked aggression against a sovereign state. Only the forces of modern media are capable of turning this shameful pillar into an honorable place, and present those who stand with him as broadcasters of ultimate truth. While the disgrace continues to broadcast lies. A dangerous lie that can lead to the most serious consequences for the whole world.

And to the last remains the irrational belief that things will not come to a big war ...

Ctrl Enter
Noticed oshЫbku Highlight text and press. Ctrl + Enter
We are
British media hysteria: East Guta - Syrian SrebrenicaDangerous "puzzle" for the army of Novorossia: in the coming offensive, the Armed Forces of Ukraine made a bet on the newest BM "Oplot-M" and "Tochka-U"
Military Reviewin Yandex News
Military Reviewin Google News
31 comment
Information
Dear reader, to leave comments on the publication, you must sign in.